Lapis X Labyrinth is a side scrolling JPRPG platformer that I found myself thrown into the deep end from the get-go.

The main screen doesn’t feature much except from “start new game” and some basic aesthetics and unfortunately, it doesn’t give you the option to adjust the difficulty, sound or music either.

You get to choose two characters to start with before moving on with very little customization. You can give them a name, change an outfit colour and few voice selections are the highlights of its customization. There are 8 classes to choose from that feature slightly different abilities and the characters are chibi-esk in design. The story is easy to follow but nothing outstanding, it is basically as follows, ”a struggling village falls on hard times and in desperate need of wealth, you and your friends must go on an adventure through the labyrinth forest in search for gold and fortune hidden within”. After selecting your characters, you’re then thrown into a tutorial mode which covers the controls, your moves and abilities. It jumps between each exercise pretty quickly and then moves you on to where you are then brought to the village which is used as a lobby area. Here you talk to the villagers to get your quests and then travel to your next location.

As I ventured forth, I found the first quest to be a little harder and more of a nuisance than I expected. It was quite tedious trying to add the additional characters to my team & the game didn’t fully explain it well enough, but you can have a total of 4 characters of which you can rotate between and use as your main. Basically, Lapis X Labyrinth has this odd mechanic where you stack on top of each other and travel as one instead of the usual trail group or solo formation. You can definitely feel the weight of the team and it can get a little harder to move and jump while you’re stacked. As the main, you’ll take the focus of the damage, but the others stacked on you will also take some damage once the main goes. Lapis X Labyrinth rotates characters as just about any other JPRPG would work, until no characters are left.

The soundtrack is peaceful and adventurous through the majority of the game not too much differs between combat and basic play.

If you’re down for a twist on the usual JPRPG, I do recommend giving this game ago. It is fun and the characters are adorable. Playing a game like this in 2D instead of 3D space is also a nice change of pace. 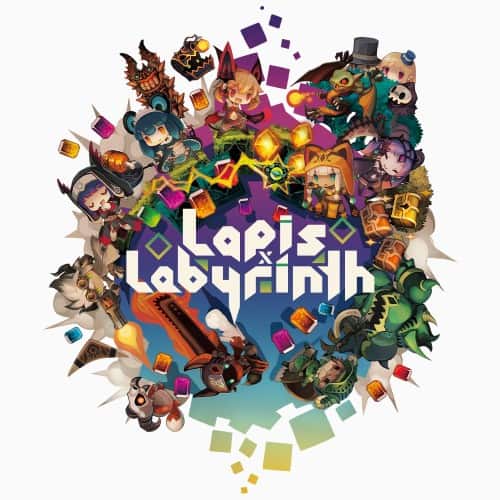 The dungeon-diving action RPG Lapis x Labyrinth puts you at the center of a high-octane treasure-hunting quest, where the danger is great and the rewards are even greater!