Published by RedDeerGames and Fig, and developed by Buddy System, ‘Little Bug’ is a 2D side-scrolling, puzzle platform indie game originally released on Steam in 2018 and now available on home consoles.

Players will take control of Nyah and the story begins with her hopping off the school bus and walking home. As players simply make her move to the right at the beginning, it quickly becomes apparent that things around her aren’t what they seem. This doesn’t seem to phase Nyah at first, indicating she’s been through this bizarre experience before. When she finally makes it home, she gets into a little quarrel with her mother who doesn’t believe the stories of Nyah’s strange adventures and thinks they’re all just her imaginations. After things escalate between them, Nyah is suddenly cast into a mysterious world filled with evil spirits and her mother is nowhere to be found. With her lunch box in hand and spirit light to help guide her, Nyah must make her way through various dark locations in hopes of reuniting with her mother.

The game mechanics keep things very simple are incredibly easy to learn, but the puzzles and challenges become increasingly more difficult as players progress through the game. The Spirit Light, the brightly glowing ball of light that follows you, is what helps Nyah on her journey by allowing her to attach and swing from it like a grappling hook similar to Spider-Man, helping Nyah reach each platform. 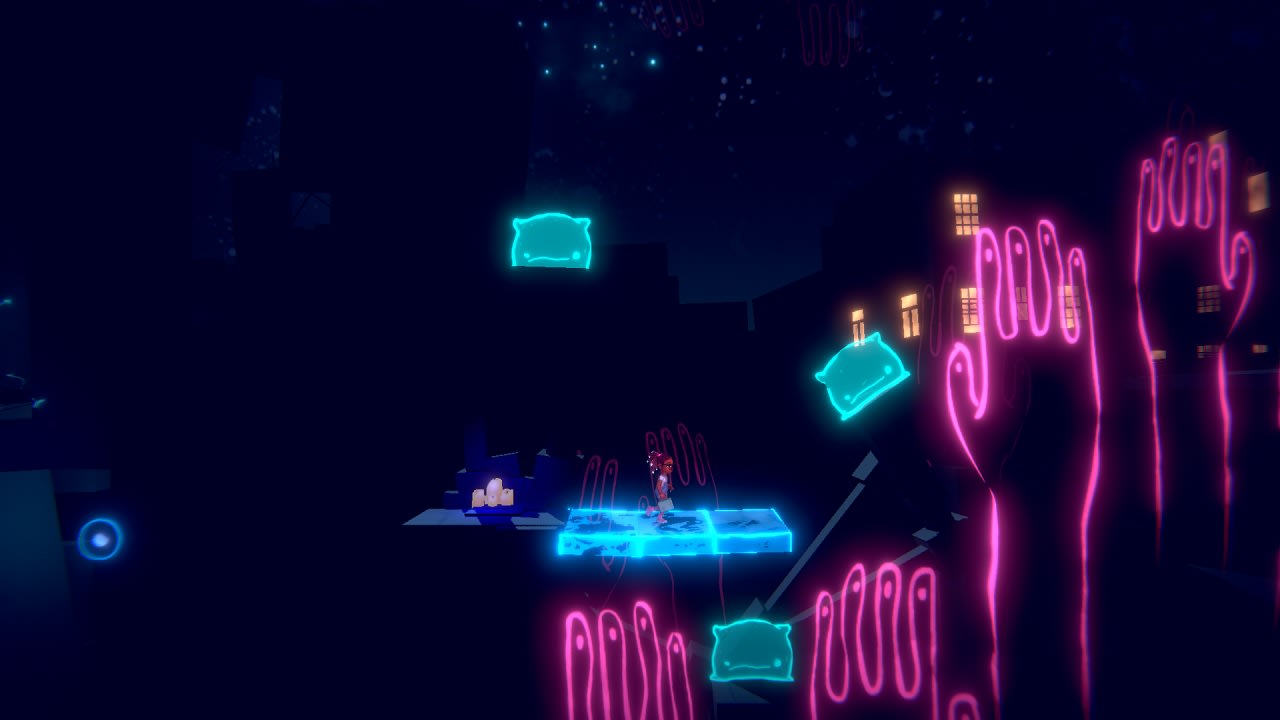 There is actually no jump button at all, so the Spirit Light does most of the work and can even break barriers blocking the path. Players must avoid coming into physical contact with the evil spirits, which could be outlines of large hands reaching out from above or below, or really tall dark human-like figures that will quickly approach Nyah if she gets too close, or something else that players will encounter along the way.

The Spirit Light can be moved in any direction using the right joystick on the controller. This unique game mechanic is what helps create some very enjoyable, interesting, and increasingly challenging puzzles for players to solve while trying to stay from the evil spirits, further adding to the intensity. Even if players fall to their deaths or touch an evil spirit (which will happen a lot), they’ll immediately continue from the last checkpoint to try again, making it very convenient and keeping the flow of the game going.

Nyah appears to be a very happy-go-lucky girl, despite the situation she’s in. Her design is very simple with her wearing a white shirt, blue denim overalls, and glasses, but this look gives her a friendly vibe which is a nice contrast to the dark tone of the game. The evil spirits are mostly big, dark, brooding, and imposing figures that look like they were drawn by a child with a marker pen, but even their simplistic designs create some haunting moments throughout the game. All the dialogue is presented through text in speech bubbles on screen and really adds to the game’s aesthetics. 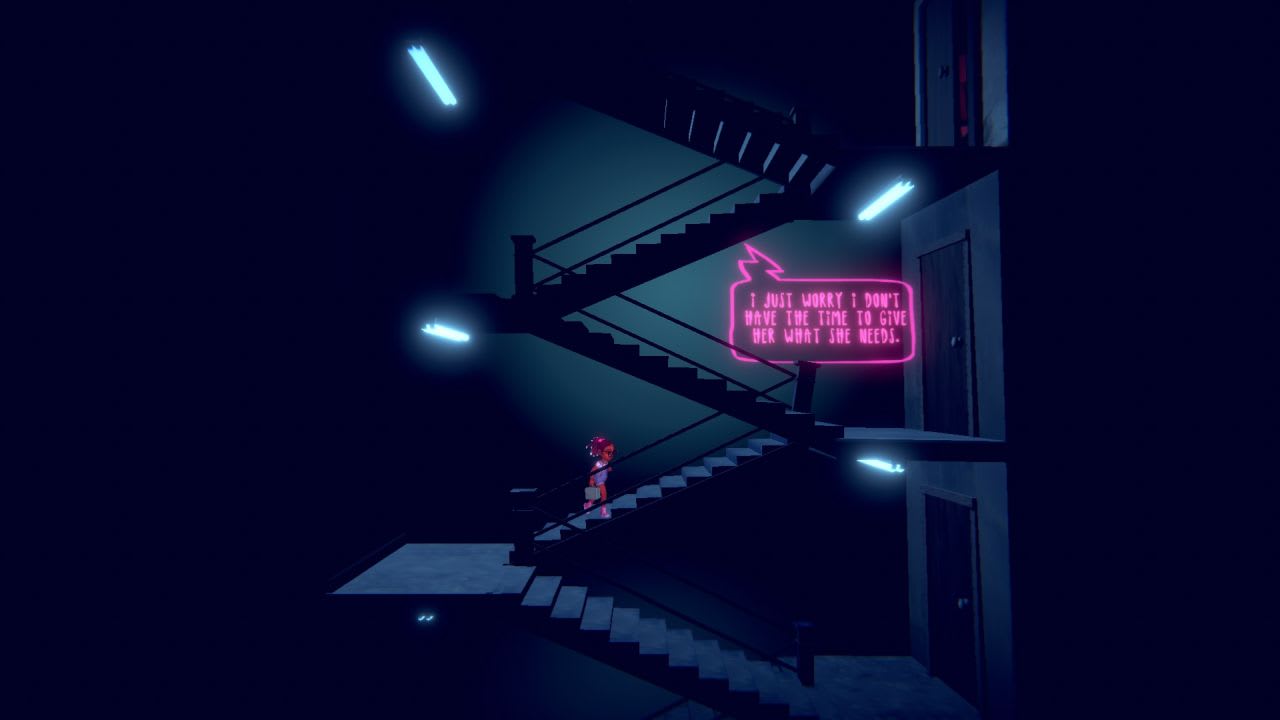 Players will be traversing through bottomless canyons and moonlit deserts, and as dark as the overall tone of the game is, it still somehow creates a very colourful and lively experience from beginning to end. The overall look of the game has a very cartoony presentation, that would perfectly suit a children’s novel.

The game’s soundtrack perfectly suits the dark tone of the game and has something that perfectly suits every moment during the game and cutscenes. Even though the game can be completed in just under two hours, there are plenty of collectibles to discover, however, Nyah can only fit six items in her lunchbox at a time. In the menu screen, there’s a section where all the collectibles can be viewed, so in order to get every item, players will need to play again to collect different items each time, giving the game lots of replayability, especially for the completionists.

‘Little Bug’ is a unique, simple, and very fun puzzle platform game. This indie title was already a big hit back in 2018 and plays just as well on home consoles. It’s like a children’s novel brought to life, leading to a crazy, bizarre, and scary adventure in a dark yet colourful world that could only be thought of in a child’s wildest imaginations. 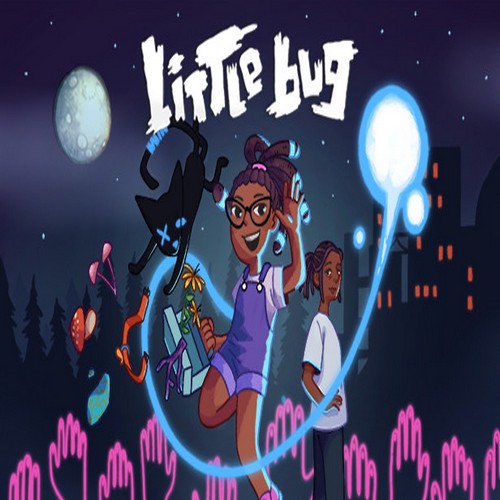 A bittersweet adventure platformer where you coordinate two playable characters who share a physics based swinging mechanic in real time. Nyah can walk and pick up items, while her spirit light can fly and explore dark areas.