Anything Mario is gold. We all know this. Only Mario could release a consistent stream of spin-off titles successfully. Now, I haven’t played a Mario Golf game since the Nintendo 64 days, so I am going in bright-eyed and open-minded.

Mario Golf: Super Rush by Nintendo is split into two sections; the story adventure and the many other arcade modes. The campaign starts as you would expect, a rookie trying to make the big leagues but also in a typical Nintendo style nothing is as normal as it seems. In a kinda Animal Crossing style ‘openish’ area, your Mii character must train, enter tournaments, compete against friends, and then face off against the ultimate threat to the Mushroom Kingdom. All pretty basic fluffy Mario stuff. The story tapped onto the tournaments isn’t very riveting but it is entertaining enough for children.

The whole cast is there, including your custom Mii character as you smack balls across the courses. The controls seem complicated but are actually quite easy to pick up and master with the help of the multiple practice courses. You power up each shot and tap to hit, with each type of club resulting in different styles, whether it be a drive or a putt. You can also put speed, snaps, and curves on shots which can be altered as you progress by adding points into different areas during the story mode. I feel for more precision, using the Switch docked on a T.V. with a controller was the best experience but that’s a personal preference. 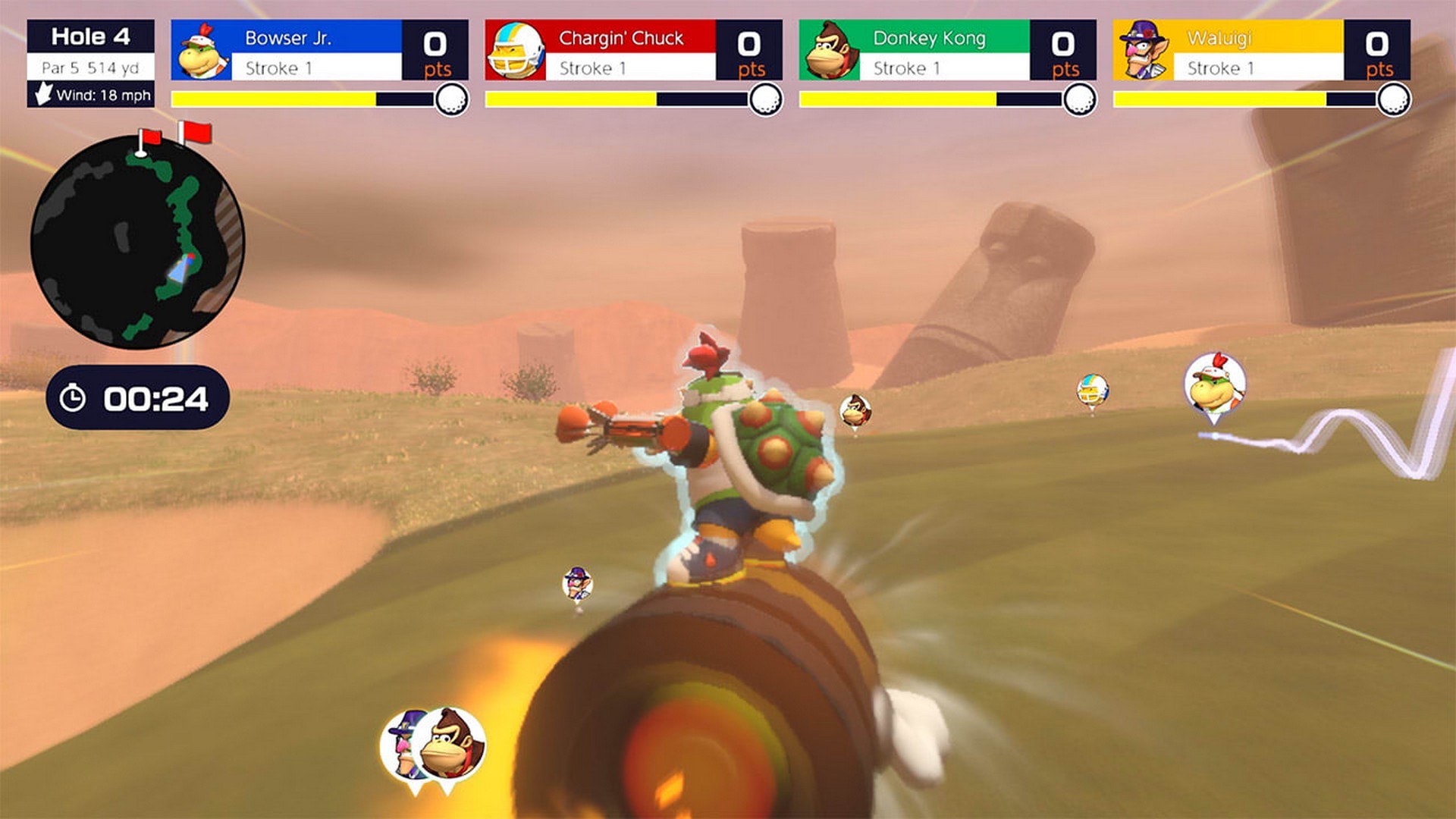 The modes you can play are standard Golf, Speed Golf, Battle Golf, Network Play, and solo challenges. Standard golf is the traditional standard golfing experience as the name suggests. Speed Golf, by far my favourite and the most entertaining mode, is a fast-paced twist on the traditional play, with characters racing to each green to hit and putt each shot in a certain amount of time, each stroke adding 30 seconds to your timer. Each player has their own golf-related powers to make the task even more challenging as they throw curveballs in your way. The added time limits and abilities as you race around the course really add an enjoyable element to the gameplay. It is just a shame the characters didn’t have a more vast array of tricks up their sleeve as many are recycled throughout.

Battle Golf, one of my favourite but fastest modes, is a royal rumble battle as you and 3 other players race to get the first 3 holes on a smaller, unique-looking course. The challenge this time around is the hole vanishes once someone sinks it, making you have to keep on your toes as to where the other players are going. It’s a very fast experience, so fun for jumping in and out of.

Solo Challenge is for you alone to attack scores and times to create personal bests. Lastly, Network Play gives you the ability to take the matches online and play with others across the world rather than the AI. 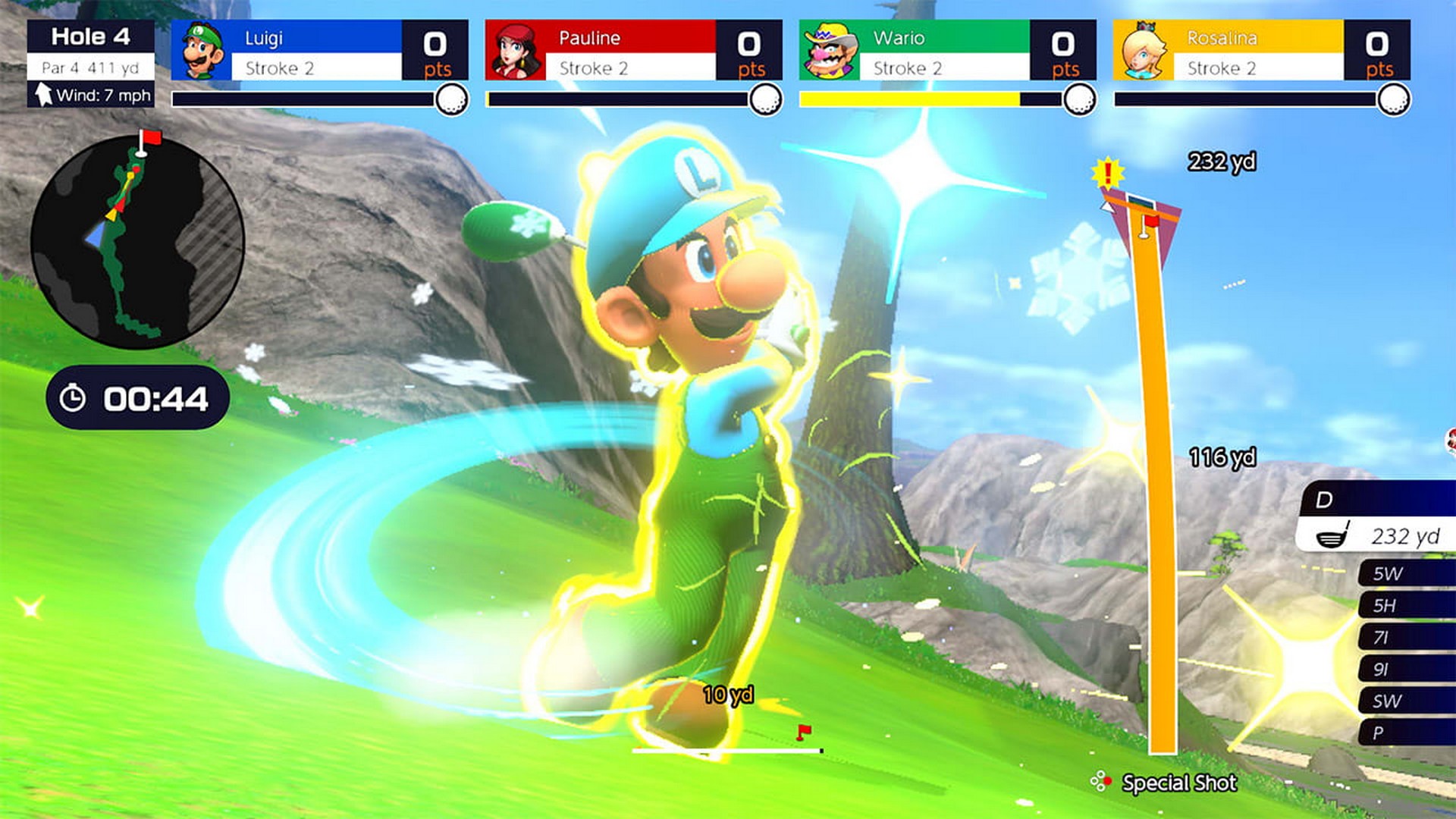 Some of the modes have match customisation which is awesome with hole amounts, wind, and scoring all taken into consideration. More and more courses open up as you progress through the campaign, however, I found it wasn’t really enough variety through the plethora that could have been utilised through the Mario franchise, in general. It is a shame really because the gameplay does get quite tedious and repetitive quickly with only a few interesting modes and especially when it feels, at times, skill-less when the A.I. can pull off a dubious shot out of nowhere when you really need them not too.

The graphics and sound are typical of Nintendo and nothing new or surprising from the franchise. They have the same bright and bold colours and obnoxiously loud menu music but as a whole, the game was crisp, clean, and tidy, another thing you would expect from Nintendo. The big bulky colours always transfer well in low resolution so it looks amazing either docked or on a big screen on the Switch.

Overall, Mario Golf: Super Rush is a fun experience but like most sports can be tiring over a long stint. If you are new to the series this is a great one to jump into but long-time fans might find this one a little lacking with its lightness on entertaining modes and courses. 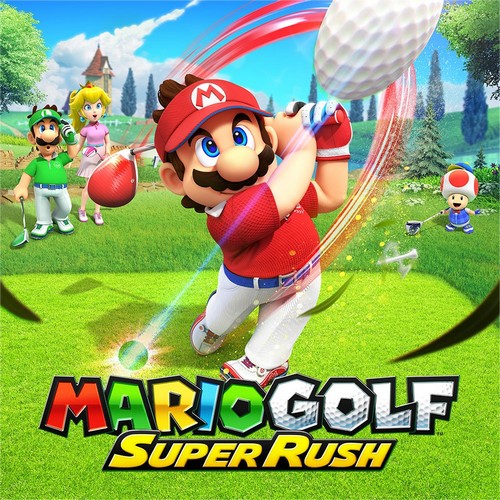 Published by: Nintendo
Developed by: Camelot

Hit the green with up to four players locally* or online** and golf with friends from the Super Mario™ series like Mario, Peach, Yoshi, and more! Modes range from Standard Golf to the energetic Speed Golf and an exciting Golf Adventure. Simple motion or button controls make it easy for both new players and seasoned pros to drive and putt.