I’m back with my first review of 2020, which just happens to be Monster Energy Supercross 3: The Official Videogame 3. Developed and published by the talented Milestone srl, also behind games such as Moto GP, Monster Energy Supercross 1&2 and also Australian Idol Sing, just to name a few. Now, while I must admit the last time I paid attention to Motorcross or Supercross was way back when Jeremy Mcgrath was in the big leagues, I was still excited to see how this stacks up against the real thing?

Singleplayer
Choosing from a roster of riders, I was pleasantly surprised to find I was able to create my own custom characters in Career mode. I obviously went with my usual green hair/purple beard combinations which is so common look to the Supercross scene… hey, I have a preference across my games, okay. You can invest quite a decent amount of time to the selection of looks and colour choices to stand.

Now as an ameteur rider, your journey starts from the bottom moving all the way up to the eventual big leagues, chasing that fame and glory. Surprisingly, the motivation of a sponsorship or a contract as I climbed my way up pushed me to not be such a terrible rider, I mean I didn’t come last, but it pushed me to get right in their and lock down that deal signing. Joining the Supercross teams of the 2019 season was fun and who wouldn’t want to become teammates with up and coming stars in the field (or be like me and just join the team with the most green- my favourite colour, it’s a lifestyle choice, don’t @ me).

If the Career is not calling you or like me you need some practice first, you can play modes such as Single Event, Time Attack, Challenges, Championship or just go for a ride around your compound. I was a little disappointed I couldn’t do tricks though in this wide open space, the closest I got was glitching out during a backflip. My character didn’t really seem to like that. 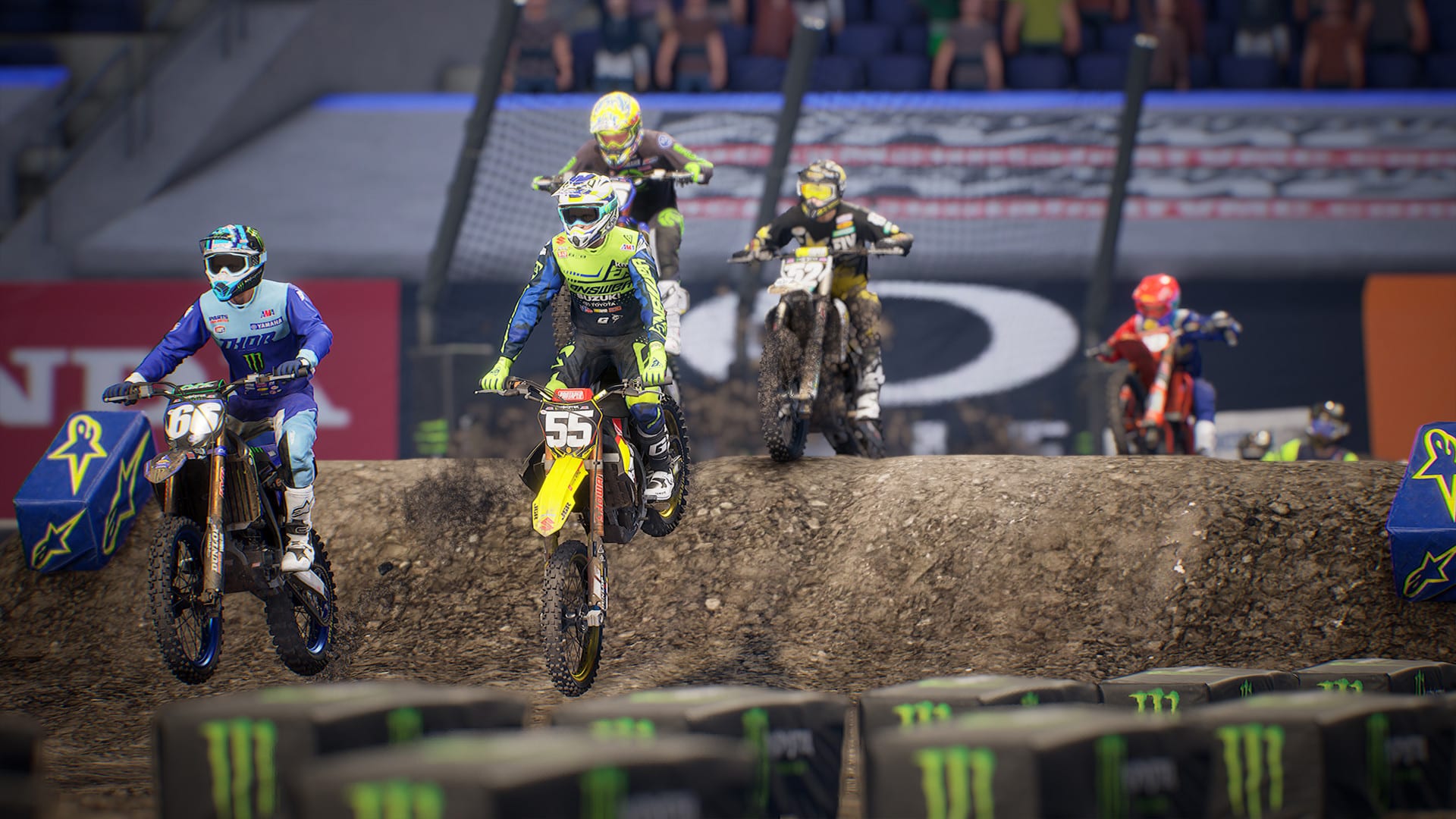 Multiplayer
Knowing it was a bad idea, I continuously punished myself in the Multiplayer. The moment I entered a race I got whooped. Even with the ping on my side, five guys slaughtered me everytime a race would commence. Matchmaking for a game was rather quick and efficient even when making my own lobby it filled rather quickly. Unfortunately, I had some issues with the in-game chat where I could not hear the other players; lucky for them most likely, the trash talk can come thick and fast. Tracks vary from simple to quite complicated; quite enjoyable when racing against real people rather than the A.I.

Controls
Players returning will have no problem picking up and playing due to previous installments. New players, like yours truly, will find a small learning curve, especially with the right analog stick controlling my weight. In most games, I play using the right stick to look around which caused me more grief than I liked but that’s on me, not the game. Shifting your weight from side to side in the turns is the core mechanic, but there is also the every helpful rewind function for when the audience distracts you. It didn’t help me much, I’m too much of a pedal to the metal into corners, type of fella.

The only real issue I had was with the A.I. bumping into me and making me have to respawn on the track a little further back. I felt like I was being punished for them being careless, which made me rage a bit. The anger came in hard especially when hitting the accelerator, forgetting my weight was at the back of the bike, making it shoot out from underneath me. Adding to it, was the fact, plastic barricades, cones or even a hay bale being made out of solid lead it felt like as clipping one would send me flying off my bike as if id hit a freight train. 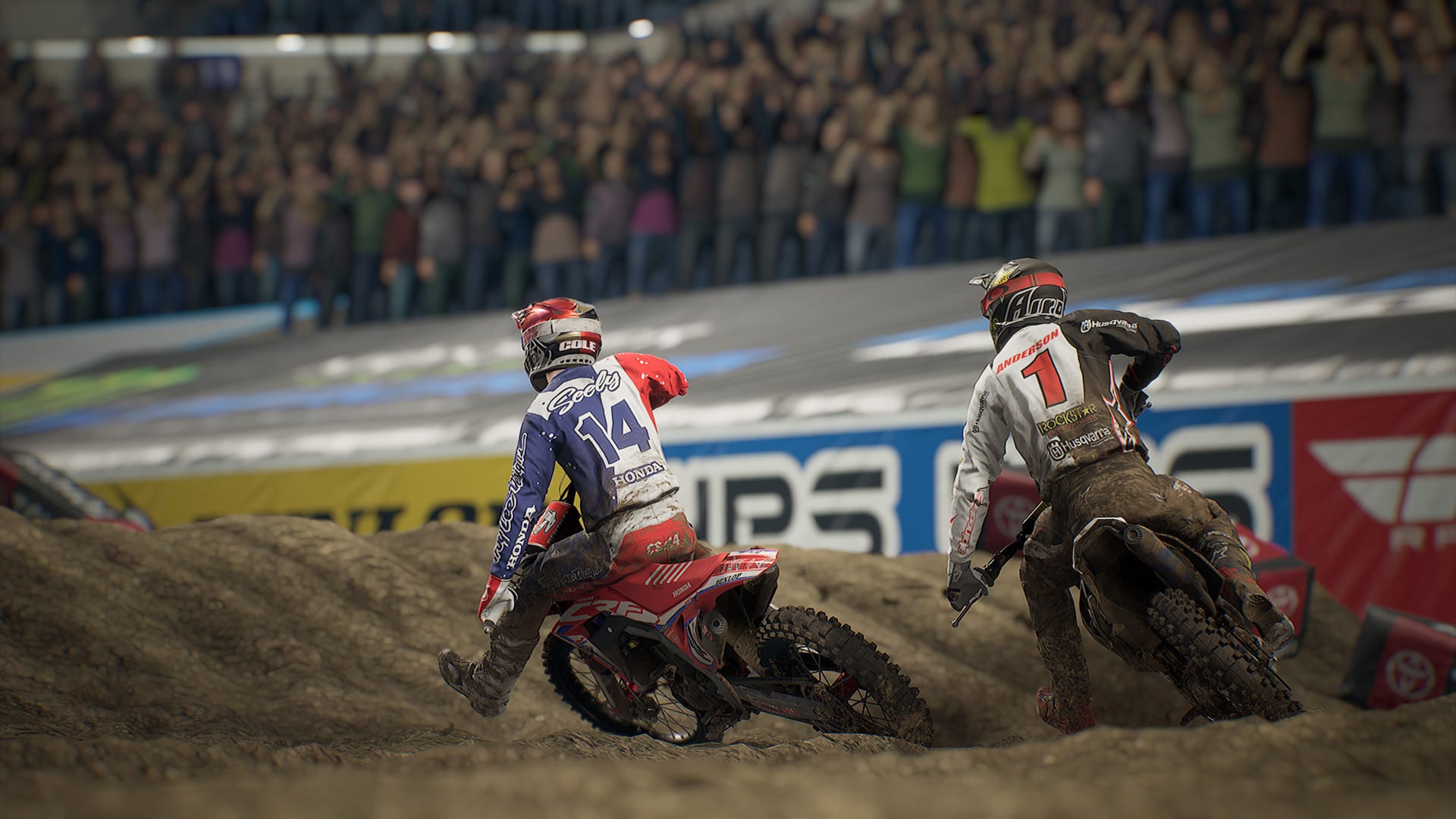 Create
The Create mode is for the fans. With options for creating tracks, you can also edit existing ones. Not throwing you in the deep end it also provided tutorials to help you build the best track you can think off to ride. You are also given the option to upload and share them to the Supercross community. I definitely shall be coming back to mess around with this mode so be sure to look out for a MKAU track or tracks, in the near future.

Gameplay/Visuals
Graphically, it looks fantastic; the bikes, tracks, riders, barricades, weather and cutscenes all look top notch like you’d expect from a real event. Even the officators on the tracks look all polished. The spectators however, look a little rough around the edges though it is not really that big of a deal. It didn’t mess with my immersion once the race started. The music was energetic and fast paced, definitely what you would expect from an extreme sport of this calibre.

Overall, Monster Energy Supercross: The Official Videogame 3 is a smart, well presented looking game that fans of the series and also the sports in general will fall in love, especially if you are a better competitor than I. I did however enjoy the multiplayer immensely, probably even more once I got the hang of the controls. I haven’t played a dirt bike game in years, so I’m glad this was the one I got to try to get back into it. It felt new, refreshing and also added a spice of life into the sport. On that note, i’ll leave you to live out your Supercross dreams, peace. 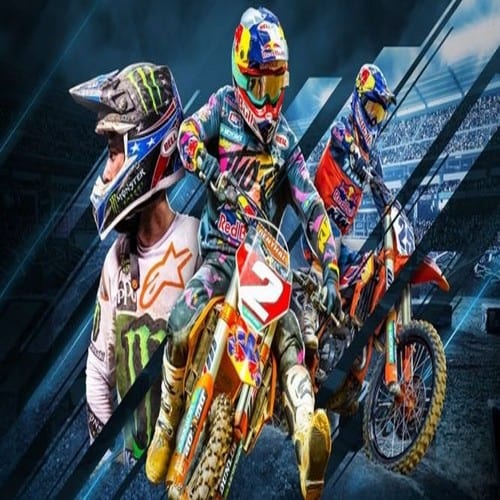 New ground and in-air physics, new rider models and new animations will create a more immersive experience and enable you to enjoy the Supercross world at its best!