As some of you will have seen, back in March we were given the opportunity to test out the Beta for Monster Train. Developed by Shiny Shoes, this digital trading card game had players fighting off the forces of Heaven as they attempted to stop a train carrying the last ember capable of reigniting the fires of Hell. Players could pick their own paths in between battles, choosing to unlock new cards, upgrading existing ones, or recovering some hit points for the ever important Pyre.

Much of the game play remains unchanged since our initial play through, with players defending three levels against waves of enemy combatants as they seek to freeze over the last hope for the forces of Hell. As such, I won’t really be focusing on these aspects as they have already been discussed here. For now, we’ll be looking more at what has actually changed.

Single player remains mainly unchanged, with the exception of a further three forces that can be allied together to create a unique deck for the player. During the Beta, we only had access to The Hellhorned, the typical gribblies you’d expect to see from Hell, and the Awoken, a group of sentient plants. As with any other card game, these different forces have their own distinct abilities. The Hellhorned focused on heavy hitting attackers and spells that damaged the opponent, whereas the Awoken we more defensive, with spells that bolster a units health, or enable it to deal damage when it’s attacked. 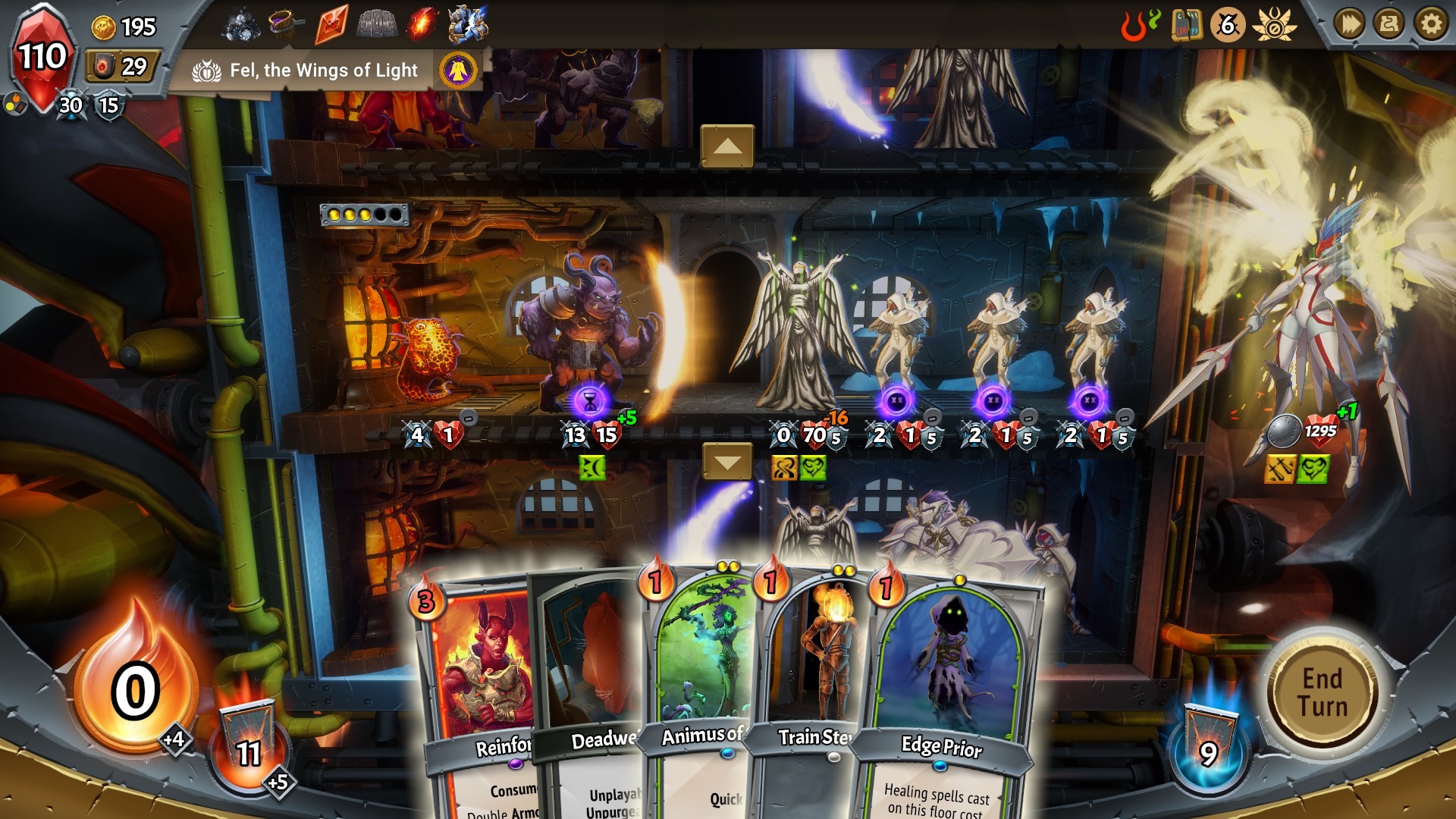 With the full release, we now have access to the Stygian Guard, themed after nautical creatures such as the alluring Siren. The Umbra, shrouded in shadow, they are the things that go bump in the night, and finally, the Melting Remnant, waxy figures that burn brightly, before fading to nothing.

Each clan has 10 levels to achieve, opening more possibilities for players to improve and adjust their decks as they see fit. With over two hundred possible cards to unlock, as well as an abundance of useful artefacts, players are spoiled for choice, and no two play through need ever be the same.

Newly added is the multiplayer aspect of the game, featuring Hell Rush, which pits players together in a real time game, racing to achieve the highest score possible. Players start out with identical resources, and all encounters are the same, meaning that winning comes down to split second decisions and an intricate understanding of how your deck works. Players can also take part in daily challenges, each day unveiling a new fight and rewarding players for their skill as they climb a global leader board or compete with their friends, and finally, players will be able to create their own challenges, sharing them with friends and sending them on a one way trip. 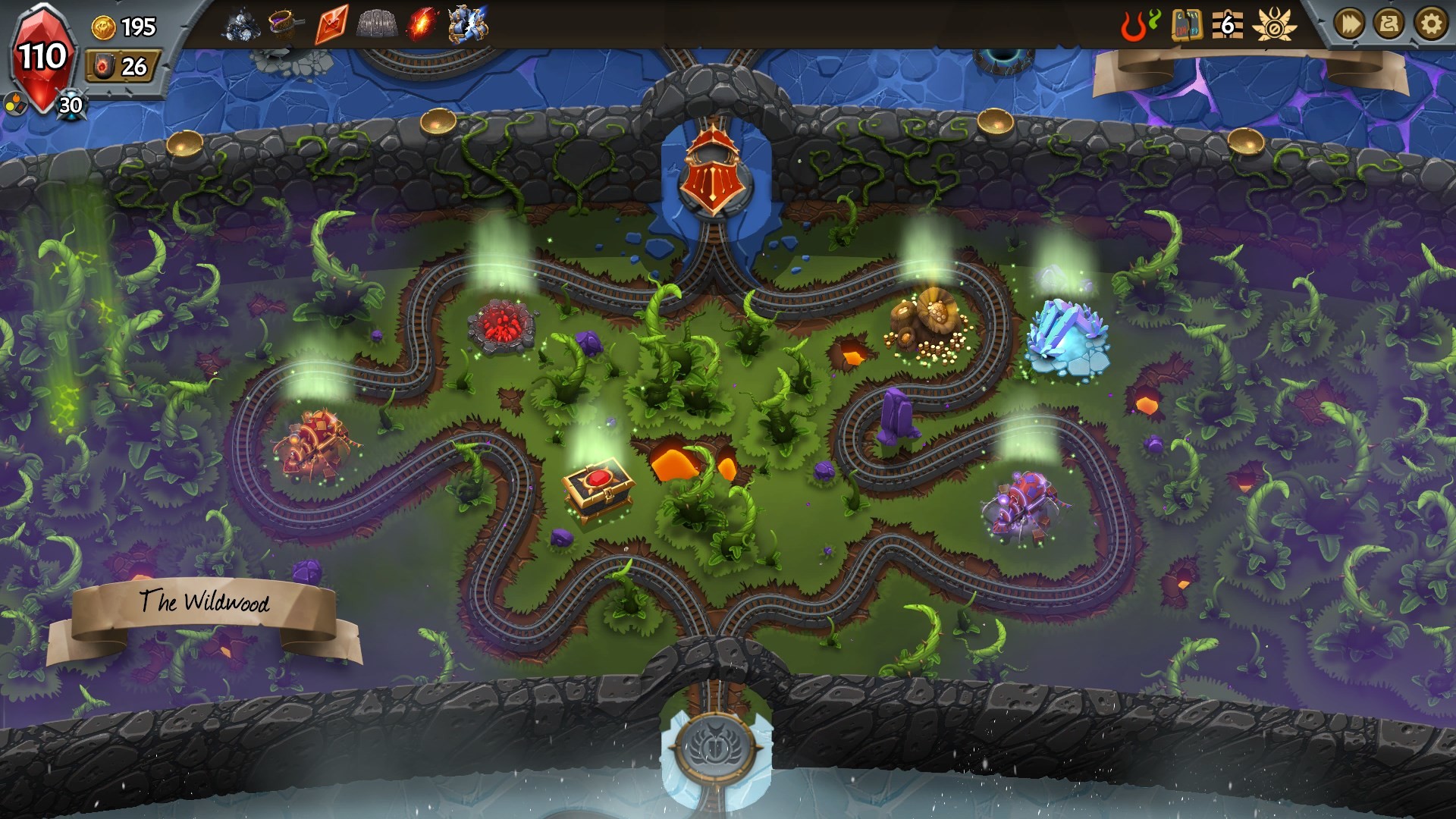 Along with a few tweaks to the games mechanics, Shiny Shoes has also made a couple of cosmetic changes, mixing things up and adding new vendors to the players map. They have also introduced a map system, allowing players to plot out their path in advanced to ensure the train stops at the locations best suited to the deck being used. Unfortunately, the animations remain mostly unchanged, with simple, two-frame animations punctuated by some slightly more improved magical effects. It almost like watching the animations from the older Pokémon games. Having said this, with everything happening on the screen at any given time, you genuinely won’t notice this unless you’re being nit-picky.

From what I saw back in March, to what has been presented to us today, there hasn’t been a huge amount of change. By all means, there were changes in terms of balancing game play, reducing just how nasty one of the enemies debuffs was, for example, but the gameplay itself is mostly identical. As I said in my preview, Monster Train is a fantastic concept with a load of possibilities. I found it fun. I found it challenging. I was constantly trying to work on my deck to have something that worked the way I wanted it to. Monster Train works, and it works well. The only thing that bothers me is the simplicity of the animations. There is no doubt in my mind that Monster Train would be a hugely popular game if it was released on mobile devices because it is simple and it works well. I just feel it is wasted on the Steam platform. 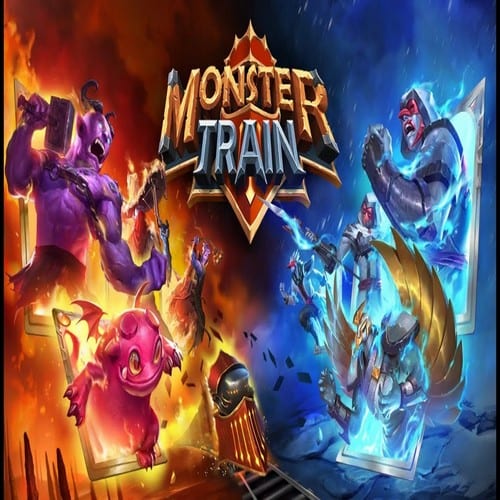 Monster Train is a strategic roguelike deck building game with a twist. Set on a train to hell, you’ll use tactical decision making to defend multiple vertical battlegrounds. With real time competitive multiplayer and endless replayability, Monster Train is always on time.