By StacefaceMayhem on August 14, 2019 on Reviews, 6 More
close [x]
Tweet
No Comments

I have never been a strategy, turn based game player. They require patience, thought-out movement and finesse. All attributes, I definitely do not possess, believe me, ask my colleagues. I loathed my last experience with one and that is no exaggeration. I’ve avoided them since.

Mutant Year Zero: Road to Eden developed by The Bearded Ladies Consulting is not only a turn-based strategiser but it also has role playing elements as well. Opening, in a post-nuclear war world, humans are the endangered, and any survivors are mutated shadows of themselves from the radiation fallout. When ‘The Ark’, their scavenger settlement and haven, is at risk of deteriorating ruining their society, The Elder, the only one that remembers the old times must do something and quick.

Sending out his best scavenger elites known as Stalkers, you play as Bormin, a rough around the edges pig and his companion, Dux, a charismatic duck, to find the one person that can keep the town up and running missing out in ‘The Zone’. Now this may sound bizarre, even childish, you are oh so wrong because this is one fascinating tale that had want more from the start to the end. While the background character development is a tad lacking, the integration of the cut-scenes and gameplay progress the action at a reasonable pace. Like I said, turn based isn’t really my jive but I was pleasantly surprised how easily and quickly I could pick it up and enjoy the challenging, tactical gameplay associated with it. With a party of 3 characters at your disposal, you can traverse top down, semi open areas until you encounter a party of enemy ghouls.

A fabulous and most useful mechanic is the fact you can creep and hide in the shadows. This allows you to slip up against cover and ambush enemies. If you encounter them unseen by splitting up, sneaking close and hiding behind terrain, you can ambush them, meaning you get the first turns and an advantage on the jump. A very much needed advantage as you will be able to attack particular enemies that may be a bigger threat to turning the tide of the fight such as snipers or the ghouls that can summon more waves.

Once the combat starts, it plays out very much like a chess board with a grid layout of where you can move too, and your enemies’ positions. Each character has two turns to either move, attack the baddies or heal yourself and others. You can attack with a range of weapons and a range of tacticals such as molies and smoke grenades, perfect for hiding your moves. The guns come in ranged like scatter shots, to silenced weapons like crossbows, that are also very strategic to utilize to get those hushed kills without attracting more forces. The Ark is the home base, much like an interactive menu, where the RPG elements come into play. Not only do you get vital information from The Elder, but can upgrade and equip attachments to weapons and buy consumables from scrap materials, artifacts and parts found out in The Zone.

The cut-scenes are strikingly 3D rendered, as well as the characters in The Ark. I was blown away at how awesome these models looked, each one spewing with detail. From Bormin’s scars glistening under neon lights and Dux feathers hang from his head like real hair to gun attachments and the characters clothing styles, it is definitely a sight to see. The top down, open world sections are also teaming with minute characteristics that immerse you in this post nuclear environment. Littered with abandoned haggard buildings, crisp pine trees and rotting logs to stealthily creep through, it is one play-board I will certainly remember for its artistic beauty. The 80’s retro-wave music compliments these scenes perfects adding to that futuristic mutated vibe.

Playing much like X-COM, I find myself thoroughly satisfied and content finally in this genre. The story is exciting and gratifyingly attached to the combat, and even though I ‘Game Over’ed a lot, I mean a lot, I kept coming back to see what happened. The RPG elements are balanced enough to not be overwhelming or cumbersome but also useful enough to feel like they make a difference. This a dark horse of a game, that is a joy from multiples angles especially if you are coming in blind. A ducking good time from start to the end. 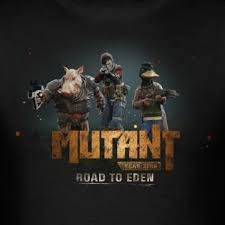 Published by: Funcom
Developed by: The Bearded Ladies

A tactical game combining the turn-based combat of XCOM with story, exploration, stealth, and strategy. Take control of a team of Mutants navigating a post-human Earth. Created by a team including former HITMAN leads and the designer of PAYDAY.