If you know me as a gamer, I live for an in-depth, fleshed out story that takes my mind on a journey. The quite manic, split personality in me sometimes (…just sometimes…) likes to blindly and remorselessly gun down hombres in an explosion of gore and violence. ‘My Friend Pedro’ developed by indie dears, Deadtoast Entertainment, with publishers Devolver Digital, is a whirlwind of fun and bloodshed, that once the end credits roll will have you gagging for more of the mind numbing carnage.

Very much in a typical Devolver fashion this game has a crude, simple and downright rudimentary story attached to it. You are our unnamed hero, a character shrouded in mystery from the beginning to the end. He wakes up in a grungy alley from unconsciousness and guided by his friend, Pedro, who is… wait for it… a banana. You can’t question the quirkiness that is attached to Devolver though, something I endear. Our protagonist is on a journey to take out the bad guys one at a time. That’s it really. It would have been nice to have more character development to our bad ass hero, just to build some connection to his motives, lackluster as they were. The very good guy/bad guy tropes played out very much like a John Wick movie, and much like those movies you could take the whole plot out and still have an enjoyable game, as the game-play is that exhilarating. Essentially a run and gun, platformer, the game play is hectic, thrilling and just plain nuts. Everything so wrong for a platformer that it is so right, it just works so well. The hero must shoot his way through different levels within unique themed chapters such as the Sewers or Old Town, spraying bullets and mowing down enemies, any means possible. A welcome addition of unique levels and boss fights also spice up each chapter. While the weapon choice is limited, this isn’t very noticeable since you cycle through them frequently as you run out of ammo. Each is a blast to use too, whether it be a shotgun that decimates up close in an explosion of limbs or akimbo Uzis clipping enemies from afar.

The game-play mechanics really make this game come alive. Different mechanics are rolled out ingeniously throughout the chapters introducing things like the use of Bullet Time which throughout the game will be your friend; a skill introduced early that means you can slow time to tee up some of the best kills and combinations. Typical of most platformers, you utilize jumping but this must be timed with shooting enemies that are waiting for you, adding that innovation to a generic move. Slowly, more and more cool elements such as deflecting bullet damage, rolling on barrels like a circus performer, kicking gasoline cans to be missiles or even refracting bullets off metal objects all the while riding a skateboard are incorporated, making for one hell of a good time. My favorite was hanging from ropes upside down, arms outstretched, carving up enemies each side of you like a scuff Deadpool, splitting the aim independently of your dual pistols. For a platformer these really add meat to the bone, too bad the game is very short, as in roughly 4hrs kinda short. Despite this, it does have replay value. Each level gives you a class rating. This depends on the time it took to complete, death count, enemy count and level of difficulty. There is also a world leader board that updates frequently. The fact the game-play has multipliers itself, keeps you coming back to try and dodge that one last bullet, or kill that one last enemy to increase it more and more. It does get addictive chasing that elusive S rating.

The art style is oddly simple, clean and crisp despite the chaos and blood splatter that ensues. While the environments are quite bland, it is scattered with things you can use throughout that distract you from this fact. The music also sets the tone, being a mixture of high-octane instrumentals but the sound effects of bullets whistling past or the clang of them hitting a frying pan echoing through bullet time take the main stage.

For this review the game was played on a Nintendo Switch rather than the PC version. It played smoothly docked on the tv and in handheld mode. I actually preferred it in handheld, it felt less touchy in controls which is a bonus as there is quite a few controls to master and crisper in graphics.

Overall, as Devolver said themselves this game is definitely a ‘violent ballet’. While the story isn’t a focal point of this game, it doesn’t really matter as the game-play would outshine it anyway. It oozes charisma and style, I just can’t put it down. This game feels like all my favorite movies crammed into a video game. Now off to find a friend like Pedro… 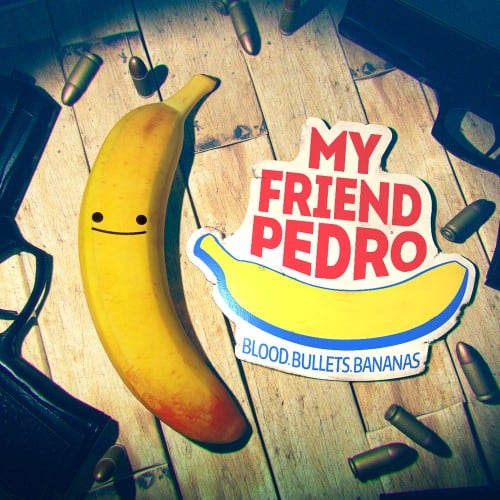 My Friend Pedro is a violent ballet about friendship, imagination, and one man’s struggle to obliterate anyone in his path at the behest of a sentient banana.