NEO: The World Ends With You

I have spent the last couple of days walking the street of Shibuya, which is modelled after Tokyo, thinking the Olympics would be infinitely more interesting if it had monster fights as one of the events. Neo: The World Ends With You is a sequel to the cult hit, “The World Ends With You” released on the Nintendo DS almost 15 years ago. It’s a radical action role-playing game that has you competing for your very soul in the Reaper Games. Co-developed by Square Enix and H.A.N.D, this game feels like Jet Set Radio crashed into Devil May Cry and I am absolutely on board for the ride.

Playing as Rindo, a cool-headed and collected protagonist, whose biggest drama at the start of the day was picking what to eat with his best friend Fret. Their day is set to get thrown off the rails when they realise they are no longer part of the mortal realm of Shibuya, and their only way out is through the noise. The Reaper Games pits the departed souls against one another in competition with multiple avenues to return to the world of the living.

While it takes Rindo and Fret a little too long to come to terms with their predicament, they eventually acclimatise and thoroughly shake up the game. Conveniently managed through an app forcefully installed on their phones, the next seven days will track their progress as the stakes get higher and higher. With the Reapers watching diligently, you will tackle light puzzle work and silence the noise plaguing the town. 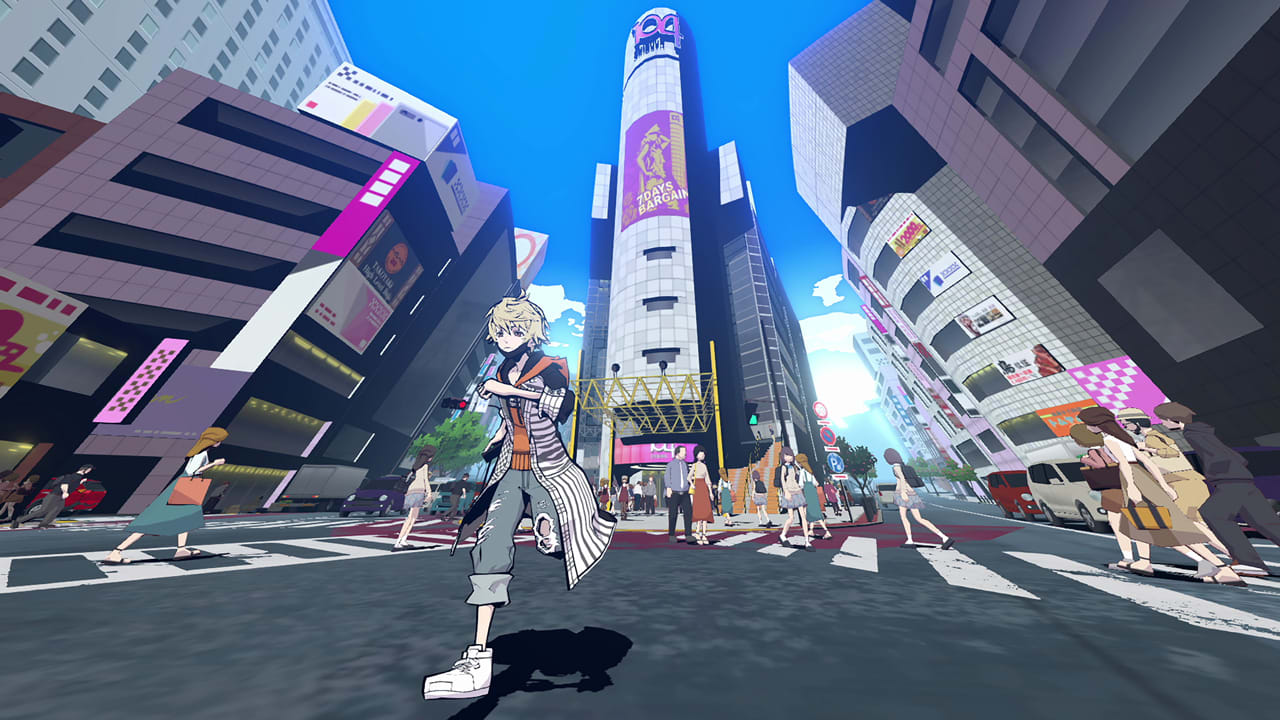 With a bold art style that fluctuates between comic book style pop in conversations and some incredible jaw-dropping rendered cutscenes, I was enthralled from start to finish, and the early 2000’s grunge style mixed in with a modern-day ascetic gave me a nostalgic kick I didn’t know I was chasing. The everyday citizens roaming Shibuya are more of a background feature with a minimal art style which makes the loud and colourful wardrobe of the competitors shine.

In fact, the fashion is woven into the gameplay and plays off the teenage joys of hanging out with friends while shopping and grabbing some takeout. It makes the game feel lived in and helped build relationships as they bond over the little things.

It’s not all shopping sprees and ramen though. There is a more pressing matter at hand and combat to be had. The multi-party combat system is a clash of skill management and a carousel of graffiti art styles and pumping music. A staggering range of music stretching from angsty teen grunge music, techno synth-wave, and pop blends together in a way I didn’t think possible. 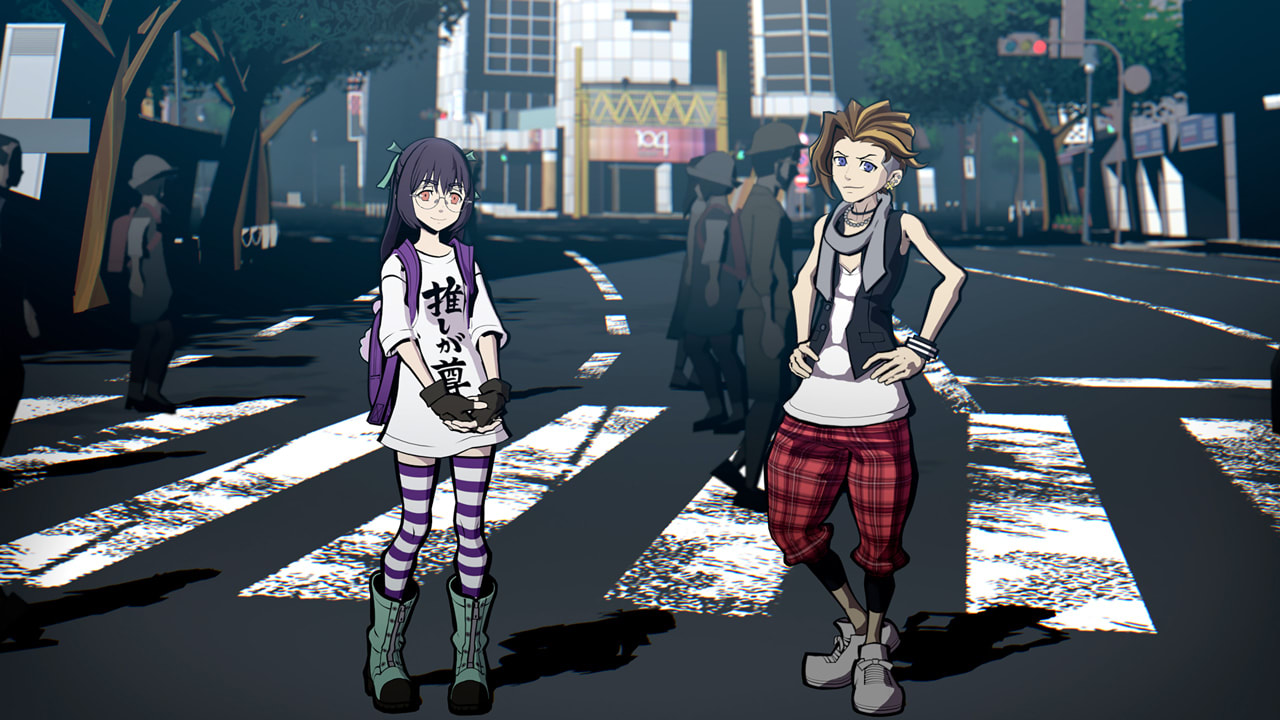 Each fight has a groove meter that plays off how well you can synchronise your attacks from the various party members. Each character has a pin that is assigned to a specific button, these pins could be a deadly flame ability or a psych shockwave that knocks enemies back. If you have three characters then it could be ZL, X, and Y with some needing to be tapped repeatedly and others needing to be held down.

It seems easy enough on the surface, but managing six different attacks at the same time with varying input requirements was akin to trying to pat your head and rub your tummy while balancing a spinning plate on your toe. Being able to change the difficulty on the fly and adjust the options for a better chance of rewards is always welcome in my books as opposed to being locked into a decision early on.

A simple yet addictive notion of collecting pins unlocks different attacks, and each pin having a level progression encourages many different builds. If you manage to time your attacks right before their charge gets depleted, you can initiate a team attack inflicting massive amounts of damage. 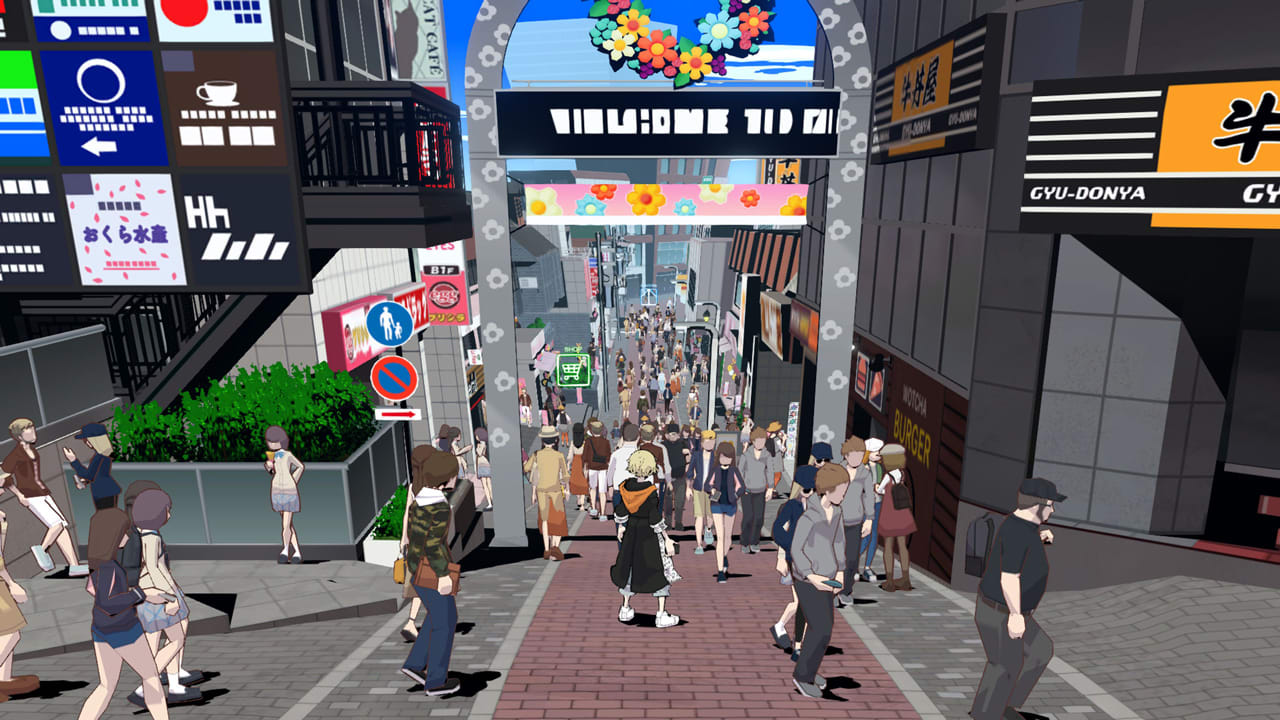 I wasn’t a big fan initially of the fixed camera angles that are permanently slanted while you move between the regions in the free roam portion of the game, although I would argue that this specific choice leans into the rebellious nature of the game and gives it a distinct identity. I do feel I should highlight that this is a heavy narrative-driven game despite the combat being advertised as the main attraction.

Frequently you will be treated to comic-book style conversation with stagnant images sliding in and out of frame as the characters talk. It can seem a little intrusive early on, however, the voice acting and writing helps to keep you invested, and being able to have the dialogue auto play gave me a chance to sit back and absorb the story.

For someone that never played the original, I fell in love with the world-building and concepts while subtle references to the original started to make sense the further I got. The combat can be short and sweet with some monumental boss fights that are so far out of this world I was itching for more. Getting to play this on the Switch made this a hard game to put down, and I found myself picking it up whenever I could for a quick hit.

NEO: The World Ends With You 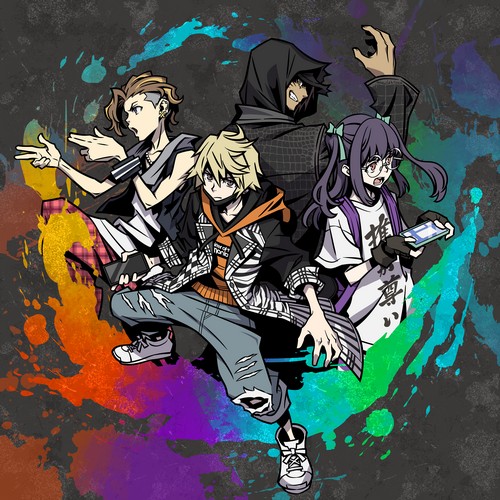 Rindo comes to the grim realization that his life is on the line when he is forced to compete in the so-called "Reapers' Game." There's no telling how this tale will unfold—but it's up to you to find out! Put your psychic prowess to the test as you duke it out on the stylishly animated streets of Shibuya.