NO STRAIGHT ROADS is an action, adventure game, placing you in the synthwave-inspired, futuristic world known as ‘Vinyl City’, a city corrupted off the power of EDM music via an evil syndicate known only as NSR. You play as ‘Bed Bunk Junction’, an indie rock duo made up of Mayday (guitarist) and Duke (drummer).

After applying, performing and failing at your attempt to reach instant stardom on Vinyl City’s popular talent show, ‘Lights Out’, Bed Bunk Junction make it their mission to take back their city from the tenacious company NSR, restore the power back into the citizens hands and bring forth the return of Rock music!

Each hero (Mayday / Duke) comes with their own specific set of moves and skills, which are thankfully explained and guided throughout the game. Mayday can slay the robotic / EDM-based foes away with her slaying guitar riffs, whilst Duke sets up gnarly combos inspired by his wicked skills on the drum sticks. 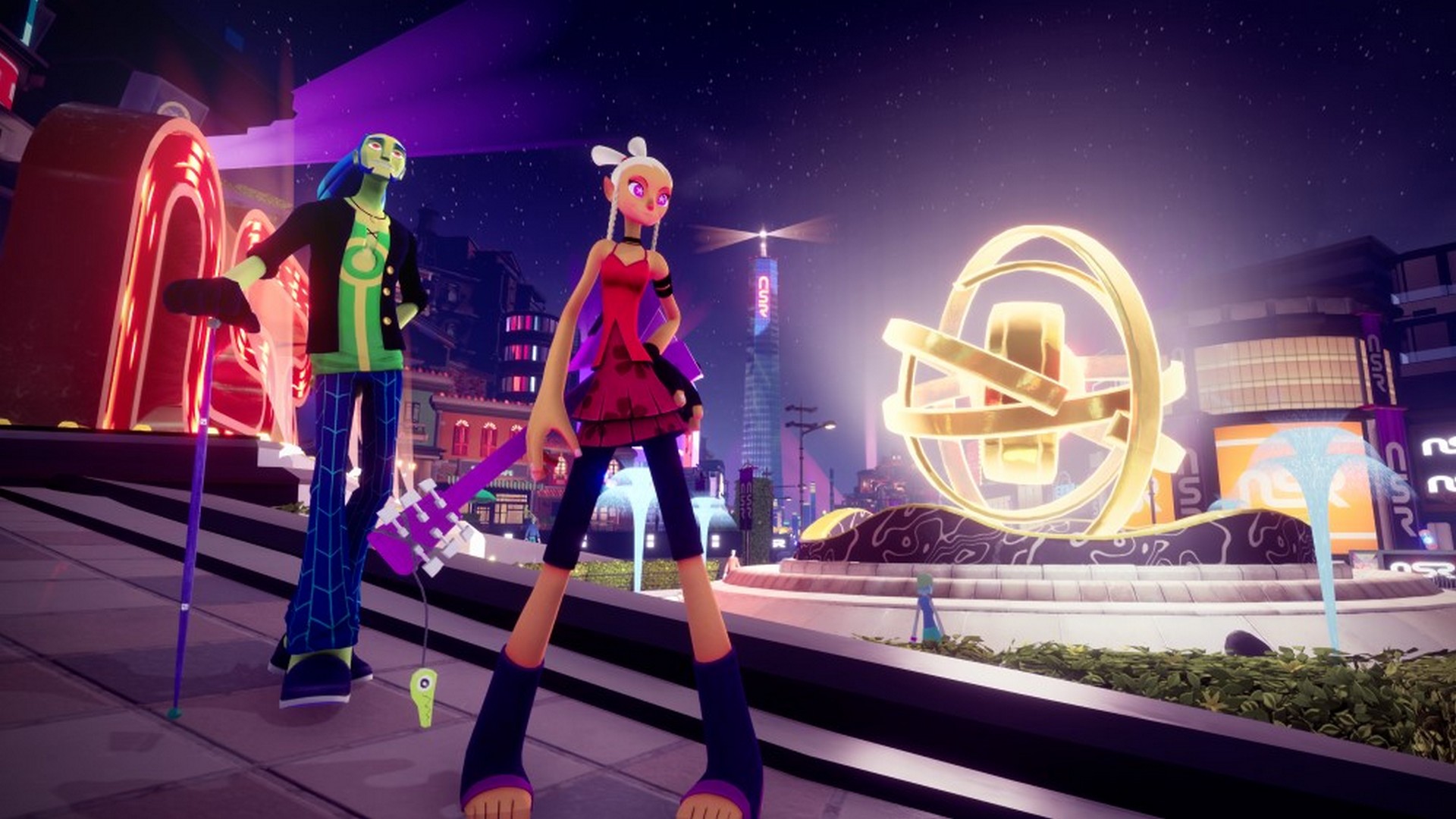 The gameplay is quite similar to that of Brutal Legend, a game which also had you play as a rock-music inspired protagonist. As the storyline progresses, you will eventually come to taking on certain district bosses. If you manage to defeat the bosses, you unlock (save) that district. Save all districts, you save the city! What’s addictive about these encounters is that they share a similar intense, yet creatively mesmerizing cutscenes and battle schematics that have a similar appeal to that of Scott ‘Pilgrim vs The World’.

Therefore, the battles are super-fast paced and extremely fun to partake in (even if you are getting pummelled), as each boss has a diverse approach and style to their battle, replicated in the appearance of their own district. The best part is that each battle is replayable, allowing you to retract, re-score and unlock further bonuses however it would have been nice to have a lock on feature for some of those missed combo opportunities.

Upon boss battle victories, a report sheet is shown which lists your battle rating. Ratings are scored via Time (Quick battle = bigger score!), Damage Taken (less damage = more points!), Combo and Parry Score (how many attacks did you send flying back to the enemy). S, A, B, C, and D are your rating range with S being the ultra-score to obtain. After you’ve been scored, a cavalcade of unlockables will reign down upon you (figuratively speaking). This ranges from in-game music tracks, weapon mods, memorabilia (usually an item / object relating to the boss you’ve beaten), stickers (which add temporary buffs to your weapons) and quest-related items. 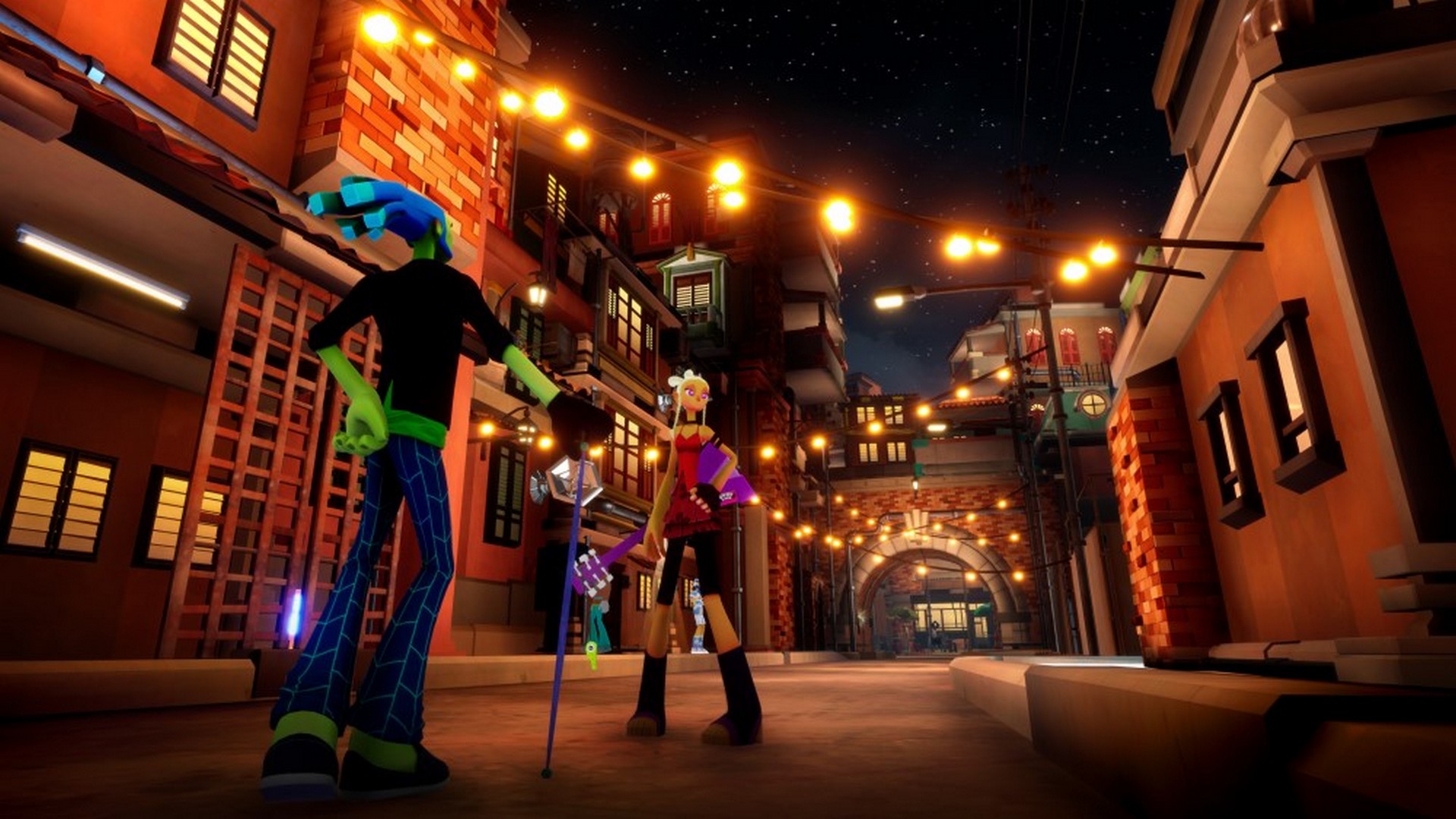 During this time, you are free to run around Vinyl City. As the city has been plunged into a blackout, you can help the citizens of the city by powering up certain areas via the use of in-city collectables called mini-qwasas (basically bottled energy). Other citizens may join you on your quest and take up residence in your sewer base. The sewer base is basically your post-battle area, allowing you to upgrade weapons, spend ‘fan’ points on new skills, learn about the upcoming boss and even feed your pet alligator. Yes, you read that right.

The art work of this game really does show a deep love and care for the nostalgic comic art style and vibe of action adventure games of the past. The effects are all showcased in a bright, vibrant way that make attacking, summoning, comboing and ultra-move unleashing all that much more enjoyable. Vinyl City reminds me of the art stylings of synthwave 80’s neon grids, with the soundtrack / layout of ‘Blade Runner’. It really is such a joy to explore and unlock more areas of the city, before moving on to the eventually looming boss fights however vague they can be, at times.

Do not sleep on this game! I highly recommend “No Straight Roads” for any retro-enthusiast and action adventure connoisseur out there. You’ll be addicted the second you hear the intro music. The story is original, the concept is easy to understand and the gameplay is super addictive! What more could you want?! Now, go forth and rock on!! 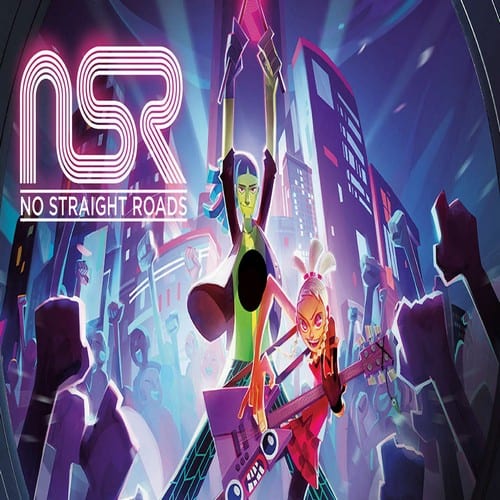 Published by: Sold Out Ltd.
Developed by: Metronomik

Take back Vinyl City - with rock!** Embark on a music-based action-adventure as indie rock band members Mayday & Zuke and lead a musical revolution against EDM empire No Straight Roads.