‘Obey me’ developed by Error 404 Game Studios and published by Blowfish Studios is a game I was super stoked to see when it appeared in my inbox. It’s no secret that I’m a massive fan of just about anything Blowfish Studios is attached to, so with that being said let’s get into it shall we.

Story
Starting off, you are introduced to Ammon, the Archduke of Avarice, having a discussion with his assistant Anna about an intruder in their domain and a betrayal by a character referred to as Ors. This leads your character, Vanessa Held, with her trusty sidekick HellHound Monty, to work her way through each of the 12 chapters to solve and unravel the conspiracy that is afoot.

Gameplay
Let me just start off by saying ‘Obey Me’ lures you into a false sense of security. I played on the normal difficulty thinking wow this is easy as I pummeled and stabbed my way through the first chapter of the story. It was entering Chapter 2 that you are introduced to more enemy types as you engage in battle and oh does it get more complex as some mines are thrown in as well.

Every chapter has Vanessa and Monty exploring the neon back streets and alleyways of the domain, finding their way hacking, slashing and even burning a way through enemies. After each battle encounter a grading screen will appear on the right of the screen, grading you on the amount of damage you received and also on if you died or not during a run through. I got the prestigious ‘SUPER SLAYER a few times but mostly ‘Assassin’ and can say this was probably the only time in my life I cared enough in improving my status in a game. 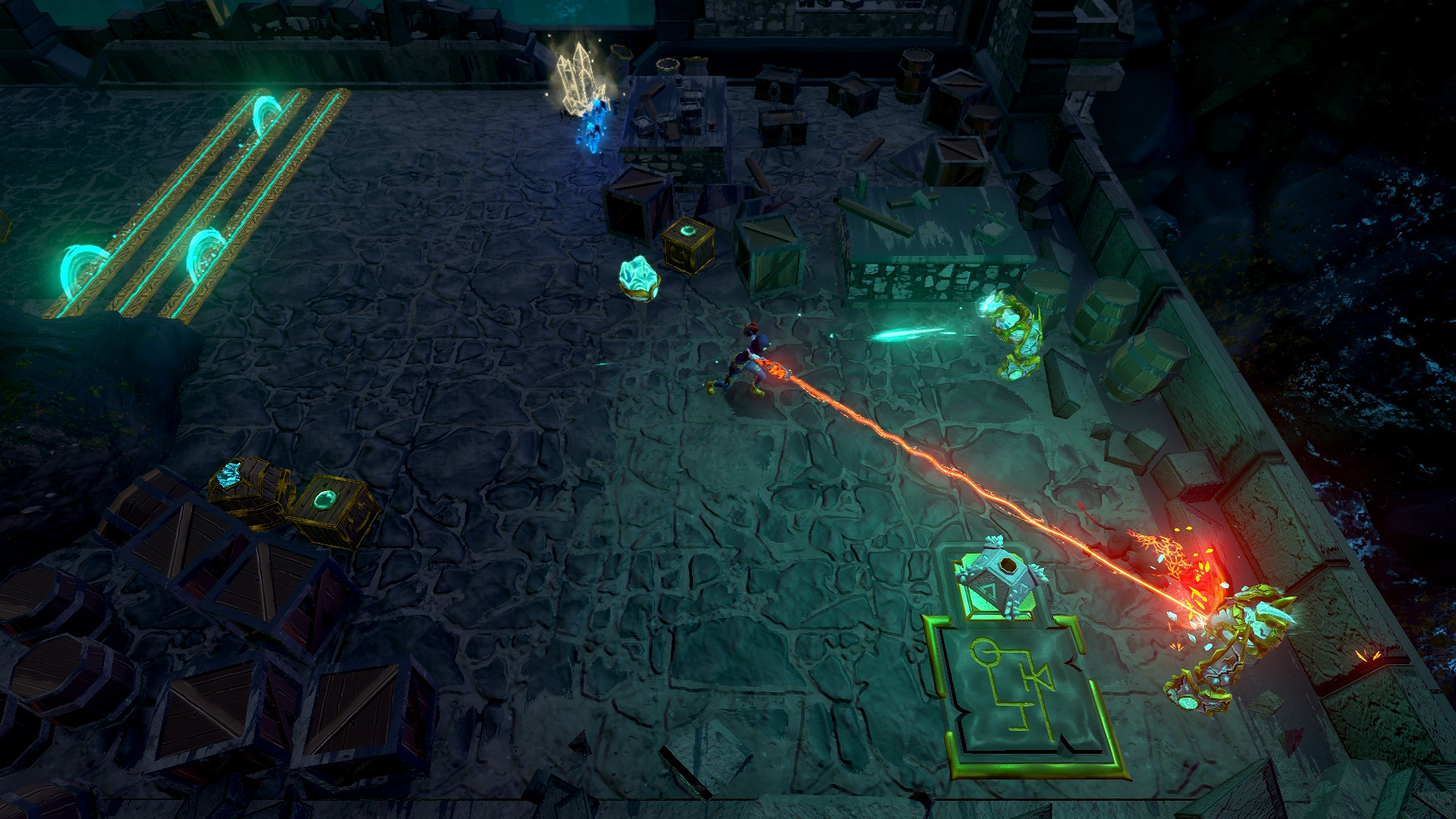 Making my way downtown, you can search for bank collectables; Astral Crystals (collect three will permanently increase Vanessa health), Soul Cores (Exp Points enemies drop significantly smaller ones) and lastly Spirit Crystals (Absorbing these helps power Vanessa’s Fusion Ability) will all increase your stats. Not only will you just find crystals but also some weapons to help the journey. I came across a lovely sledgehammer, to serious game changer for my sadist side.

Combat is brilliant. Good ole’ button mashing fun, with the ability to swap between weapons mid battle for some sweet action, it’s definitely a ride. Vanessa also has the ability to throw daggers and using the hammer gives her the ability to summon a creature to help her. The lively sidekick, Monty, during fights takes up that mantle but you can also have up to three minions of your own that will serve you till their death.

At times, Monty as an A.I. would be counter intuitive with him spitting fire balls that I would have to run back to him to launch at an unsuspecting enemy. This was the only flaw I had with him as once I unlocked his skill tree and a few others it made combos easier to remember and apply.

Controls
The controls are pretty straight forward like most combo button mashers, which I think a lot of people would easily be able to pick up and enjoy. (LB)(RB) allows you to easily switch between weapons and (LT) warps/teleports which is extremely helpful in battle or travelling through minefields.

(X) performs skills such as throw daggers or summon minions depending which weapon you’re using and (B) launches a warp attack, best used after smashing combos (A) Attack/interact/skip cutscene. (RT) will trigger and aim one of Monty’s special skills and (Y) will enter Fusion mode; filling the soul bar. Hitting (Y)will cause Vanessa and Monty to fuse to become a fiery demon slayer for a short time, depending how many bars you have. Something that will never grow old. 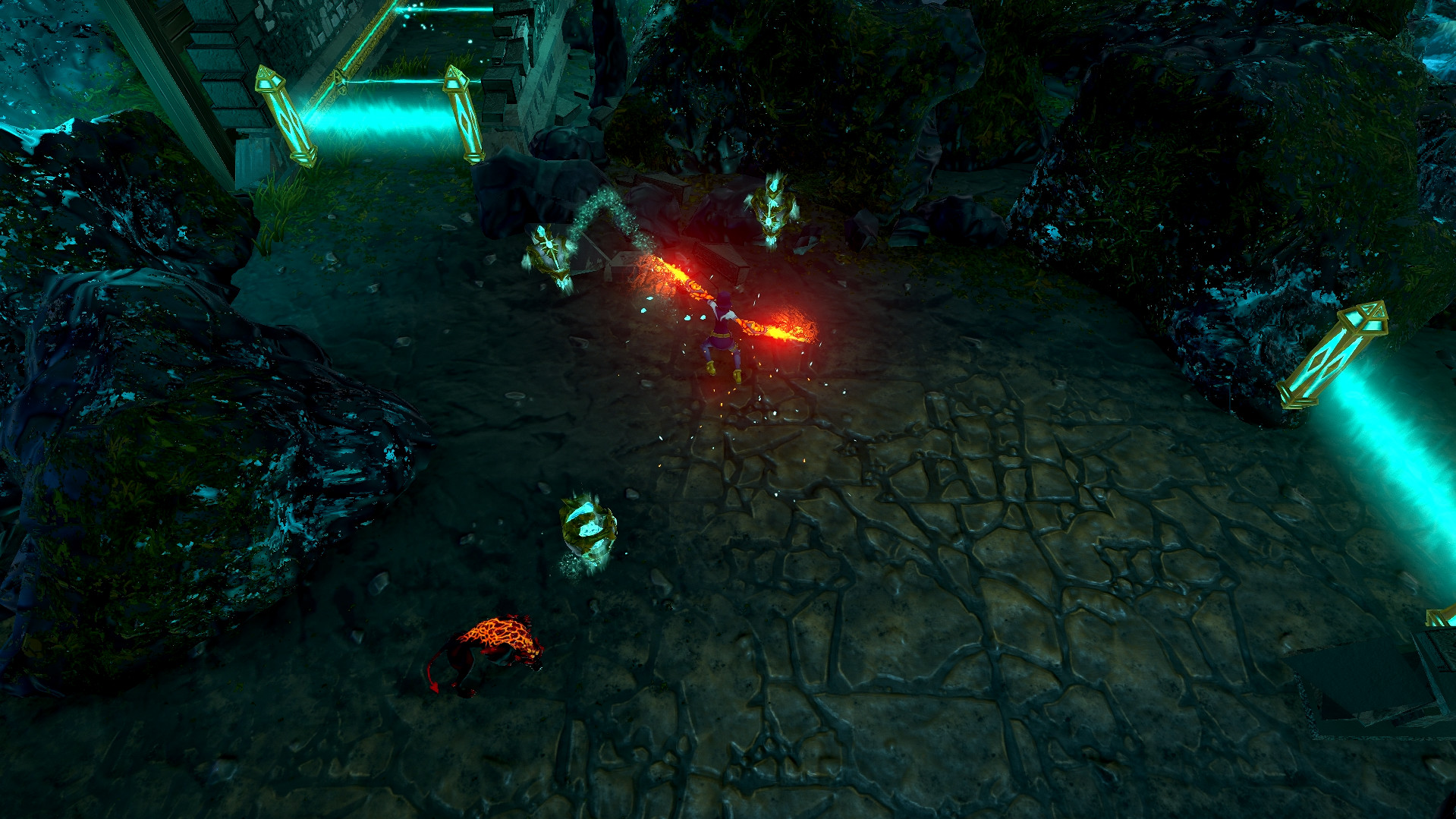 Visuals/Audio
The visuals were similar to an updated remaster of a Playstation 2 game, by no means is that a bad thing, as it brought that retro vibe of days past. On the Xbox One S it looks and runs bright neon colours not just on the levels but enemies as well, making each type stand out leaving me to try to remember the best way to take each one down in and in what order. The cutscenes are cool as well; usually shown as a still comic panel with text boxes and actual voice overs. I really dug this presentation choice as it brought so much character to the game.

The audio is another hit in my book. Upbeat and fun; I don’t think I ever heard a loop or repetitive track except when I was on a menu or I just didn’t notice which was quite enjoyable.

Conclusion
Now, while the friendly A.I. wasn’t all that helpful in battle as I said earlier,especially Boss fights, this game is still just downright fun. Even the banter between our two protagonists at times is enjoyable. Also, due to everything going on in the world with social distancing, I never got to try playing couch Co-op with another person BUT I did try using my feet but didn’t really work out too well… I do feel like smaller independent game developers are crushing it with games over the bigger companies lately, who lease the same repetitive concept year in year. If you haven’t played many indie games yet I definitely recommend giving this one a shot. 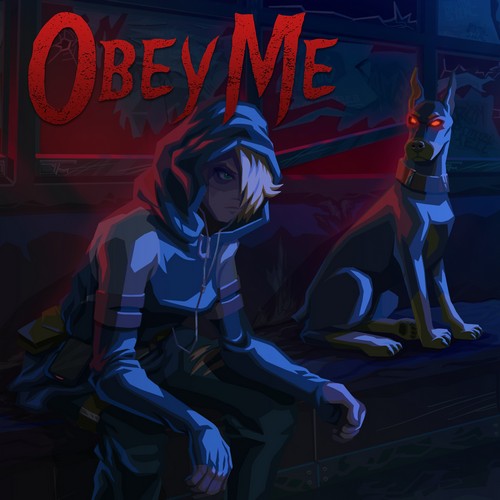 Set in the modern world, Heaven and Hell are locked in a millennial conflict for the souls of mankind. Vanessa Held, a lowly Soul Huntress in the infernal ranks, and her Hellhound companion, Monty, will tip the balance of war with their own hands.