Plants vs. Zombies: Battle For Neighborville

The battle for the garden got bigger with an all new sequel to Plants vs Zombies Garden Warfare 2. In Plants vs Zombies: Battle for Neighborville, an all-out battle between Plants and Zombies has escalated, and we are no longer in the Garden. With this latest installment, PopCap Games have gone back to their humorous and novelty roots, with no pun intended. From its gameplay to character designs, all the way through to game mechanics, it still feels like Garden warfare 2, but with a few little tweaks that offer more this time around.

Battle for Neighborville see’s you fighting for either side; Primarily focused on the Plants, but opening up to Zombies once you’re in Dave Manor. After the initial prelude, you can choose to visit Zomboss HQ, swearing allegiance to the Zombie cause and enlisting yourself. Similarly to Garden Warfare 2, each base is used as a hub for players to gather, allowing you to group up with friends, random players, or simply psyching yourself up before moving onto the next battle. 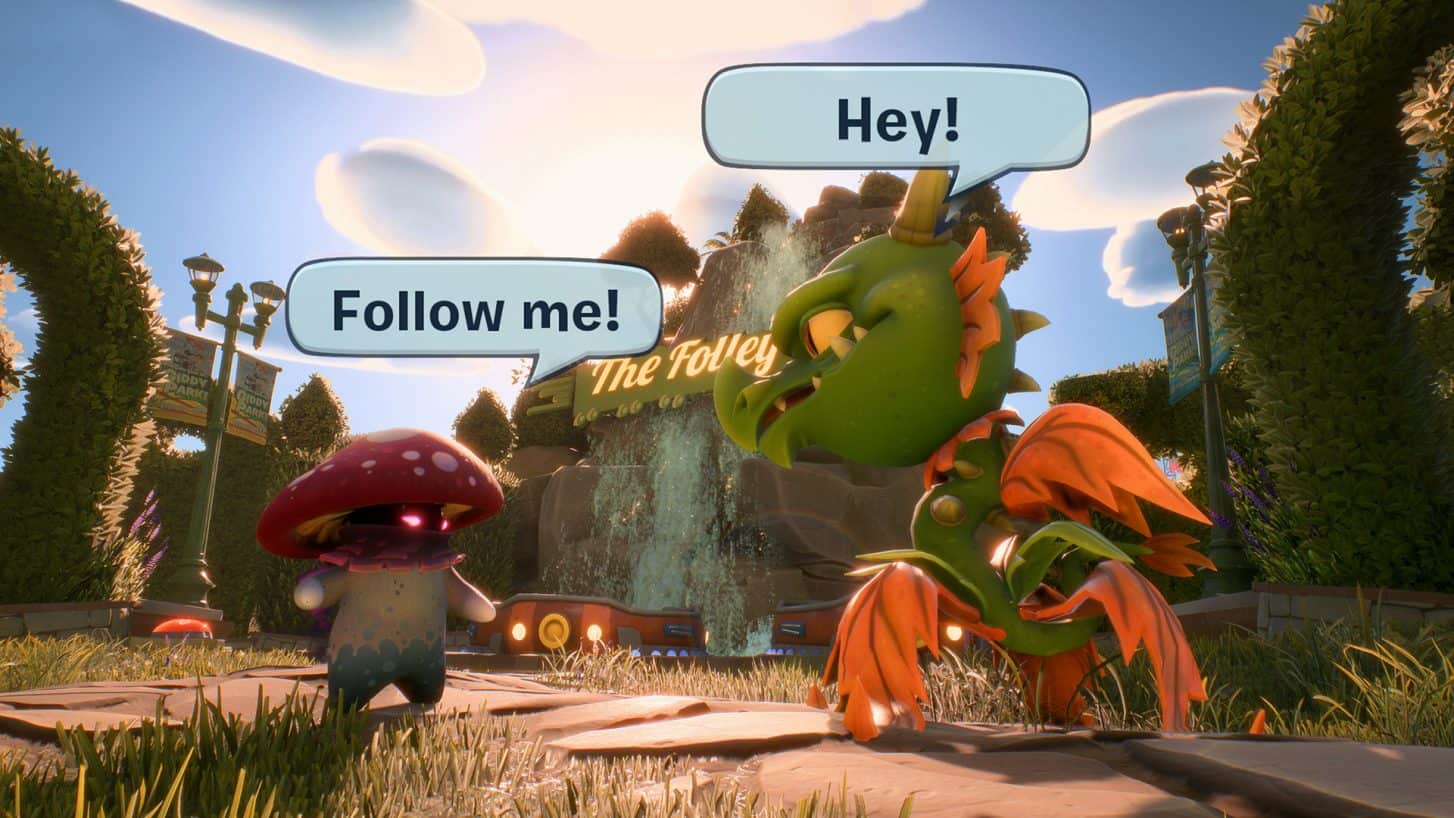 Visiting the local Carnival, Giddy Park, players will be able to easily adjust lobby settings while scoping out which rides can be used to create a battlefield advantage. Easy access to the multiplayer portal will grant players a choice of modes, including Battle Arena, Turf Takeover, Team Vanquish, Garden & Graveyard Ops and a Special Events Mode. For those less inclined towards PVP, Sundrop Hills in the town center, or Mountain Steep will grant access to Plant based missions, while Zombies will have to find Pressure Pier or The Weirding Woods.

Graphically, not much has changed since Garden Warfare 2. While they might have rounded off a few edges, much of the game looks unchanged, with its standard character designs and cartoon-like world. Fortunately, they have created some new characters for both sides, including some capable of flight. In a strange turn of events, PopCap Games has also introduced a new combined character mechanic, where you and your team mates can become one, an abomination more powerful than the sum of its parts. Another small thing I appreciated, is that at the time of writing this review, Plants Vs Zombies: Battle for Neighborville was celebrating their Halloween event and had the world decorated accordingly. A small touch perhaps, but I do enjoy when a game world changes based on holidays. 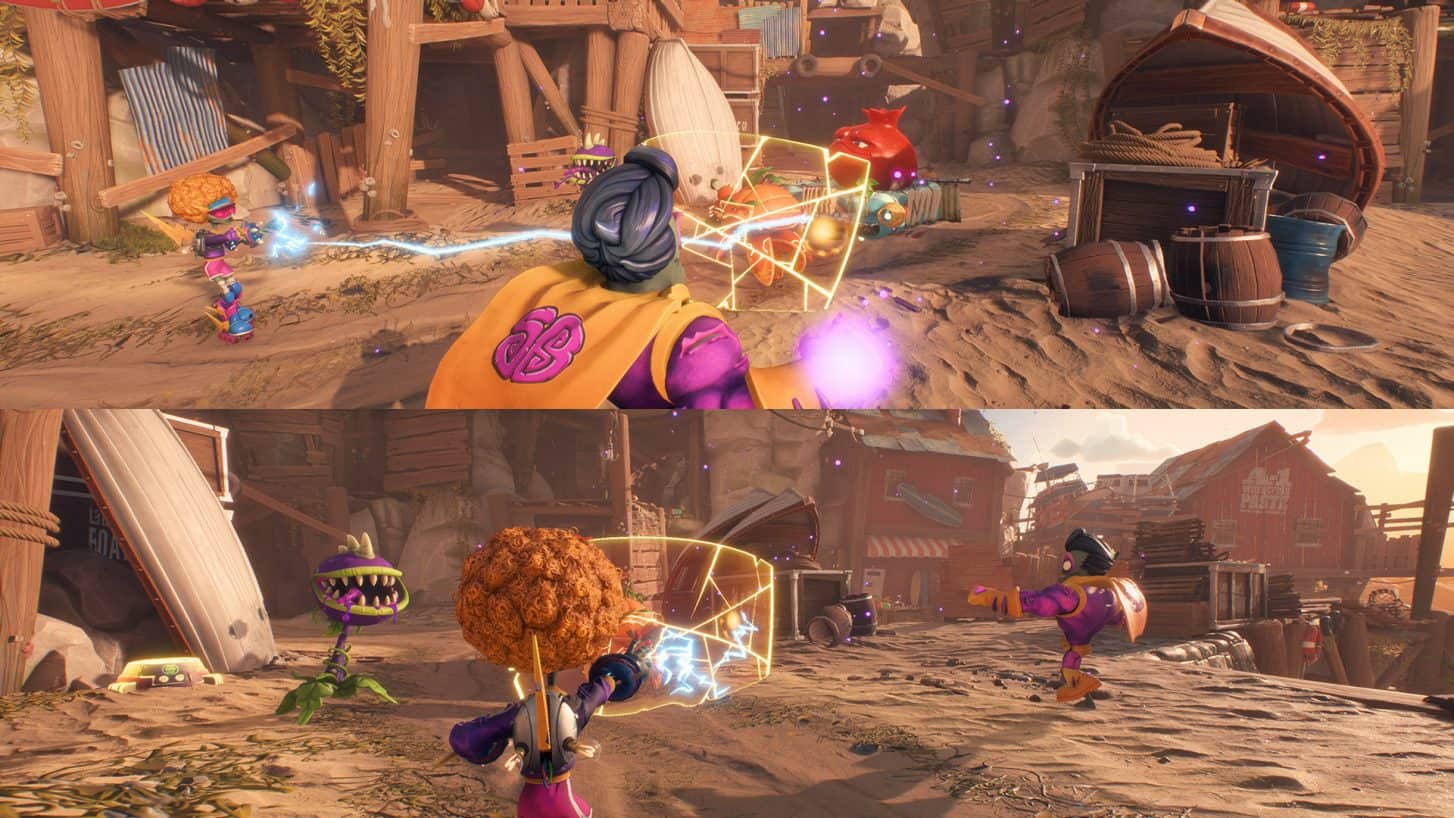 Controls are also unchanged, sticking with the tried and tested scheme from Garden Warfare 2. If you’re new to the franchise, Battle for Neighborville plays pretty much like any third person shooter you’ve ever played. Once you’ve worked out the control scheme, you’re pretty much good to go for any class, as while they have their own unique abilities, they all share the same control system.

Unfortunately, nothing has changed when it comes to audio – at least not from what I could tell. From the music to combat effects, everything sounds exactly the same as Garden Warfare 2. If anything, I found there were more issues with sound than in the previous installment, as I constantly encountered audio glitches, with sounds bugging out and sometimes failing completely.

Overall, nothing has really changed. Aside from a few extra characters to play as, or a redesigned world, we are basically playing a re-skin of Garden Warfare 2. The addition of a rewards tree certainly helps to make things a bit better. Having items you can unlock as you complete challenges is always fun and gives players something to work for. While nothing has really changed, the game is still really enjoyable and well worth giving a shot.

Plants vs. Zombies: Battle For Neighborville 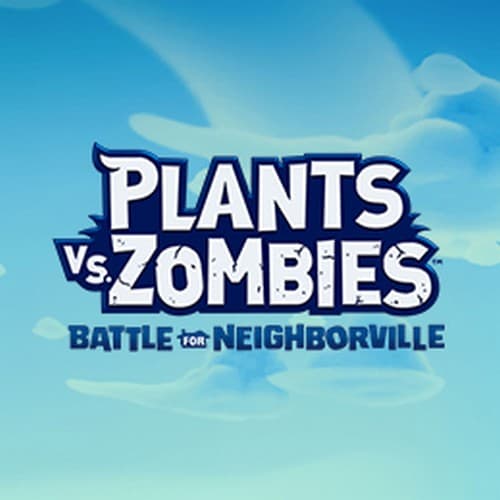 Welcome to Neighborville, where all is well. Except that a crazy new coniferous conflict between brain-less and botanicals is brewing! What are you gonna do – call the crops? Soil your plants? It’s time to kick some grass in the wackiest shooter experience between plants and zombies yet: Plants vs. Zombies: Battle for Neighborville™.