Rigid Force Redux is a classic shoot‘em up, developed by com8com1 and published by Headup Games, renamed from the original Steam game Rigid Force Alpha. Rigid Force Redux has had a fresh coat of paint and has been released for the Nintendo Switch. Anyone who has played or enjoys spaceship shooters this can be a great addition.

Rigid Force Redux has a great tutorial before you get thrown into the action, so regardless of if you are an old hat or new to the genre you can play the main game with all the knowledge and skills required. Your spaceship has an on board AI named Psye who helps out by giving hints and sometimes irritatingly letting you know you’ve been hit. On completion of the tutorial, you are told you need to go check on some nearby planets as something strange is going on. 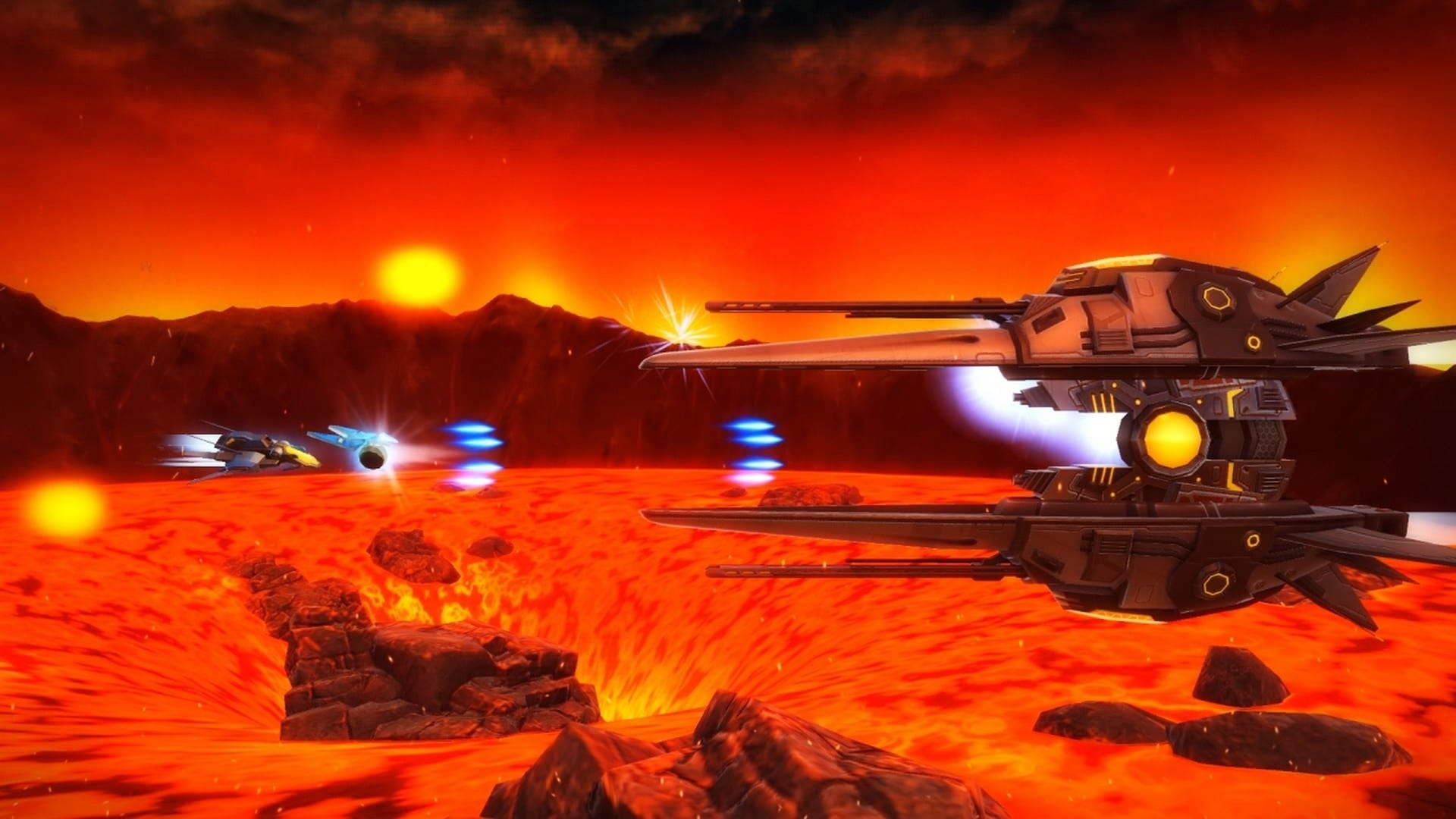 The story is not much to work with, but that is not really what this game is about anyway. Rigid Force Redux is a 2.5D side scroller, in that the ships and back ground are rendered in 3D and look amazing. You explore different worlds and landscapes, from inside a ship, to worlds made of ice or sand, plus more. Players will also have the choice in playing the arcade mode, which incidentally is much like the story mode, but without the creamy fillings in between. Accordingly, the music is predominately fast paced techno, with tracks changing as the game goes on, leading to a wonderful mix that matches the games art and play style perfectly.

Rigid Force Redux has some great features that are explained during the tutorial. As you defeat the enemy ships and monsters, green orbs are dropped and you will need to collect these to access some of the special moves available to you. You’ll want to save abilities such as a super burst of attack to clear a path quickly, or something vaguely resembling a windscreen wiper that quite literally wipes incoming fire away from you. The B button is used as your primary attack, generally firing in straight ahead, though extra mini ships can be added to your arsenal when you encounter certain figures on the screen called Force Shards. Some of these extras will change your firing ability, offering green projectiles that ricochet of hard surfaces, orange rounds that fire in a deadly cone, or missiles that will home in on targets as you fire your standard weapons. 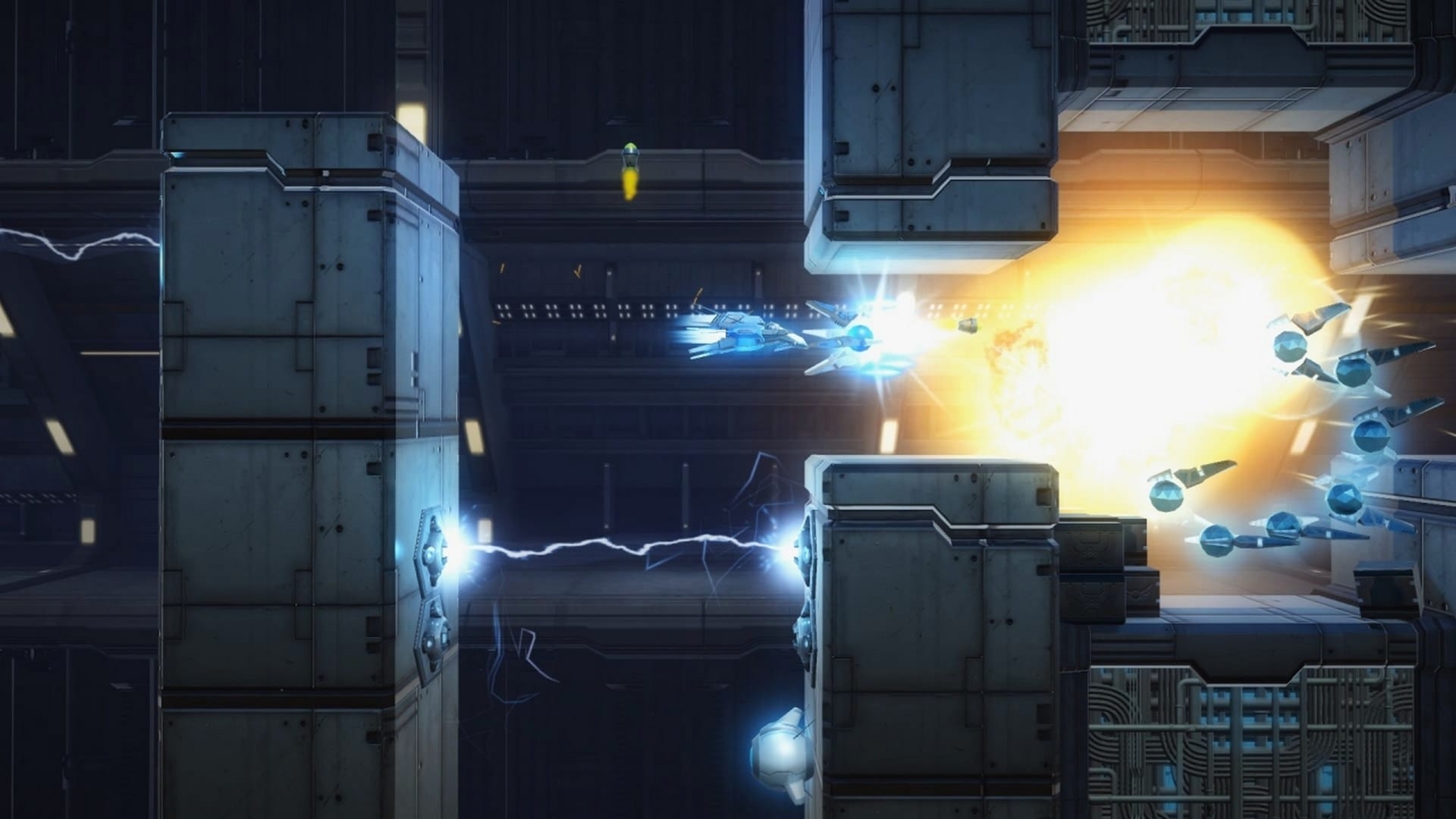 The game design is repeated in each level, with the first stage having you trying to get to the source of an issue or signal as you traverse that world, moving around obstacles and shooting enemy ships or creatures, while stage two is a boss battle. While there are several difficulty levels available, your ship has a shield that can take three hits before being forced to respawn. Players then get three respawns before the level restarts, followed by 4 restarts before it’s officially “Game over.” Needless to say, it’s quite forgiving no matter what difficulty you select.

Rigid Force Redux is challenging, but is very generous in how it keeps you playing. While I was only able to play the game on easy, I had a great time and really enjoyed the title. The intense pace of the music meshed well with the action during a game and keeps you excited, even if levels feel somewhat repetitive. The control scheme is nice and simple, meaning anyone can pick it up and play it right away, so if you’re feeling competitive, you can head on over to the global leader boards and compare yourself to everyone else. Whatever your preferred way to play is, Rigid Force Redux is simple and fun enough that I would encourage you to add it to your collection. 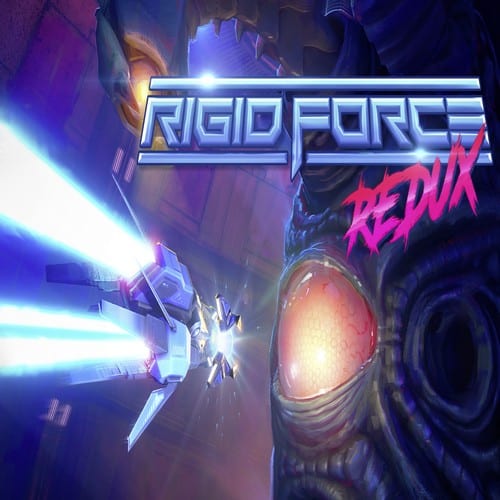