Ruiner, by Reikon Games and my favourite violent and quirky studio; Devolver Digital, is one of the best games I have played on the Nintendo Switch this year. Period. Initially released back in 2017, on PC, this Bladerunner fantasy I missed out on then, but heard so much about from a fellow reviewer. When I heard it was being released on Switch I jumped at the chance to get into it, and believe me, was far from disappointed.

This game definitely will fill your Cyberpunk 2077 hole, as it was recently delayed..again. Set in a distant dystopian future of 2091, the city of Rengkok is a cyber acid dream. Not all is well though in this future, as the large and corrupt corporation, Heaven, has mass control of the city with its army of henchmen. Queue our hero; The masked, silent (but oddly charming) protagonist so unceremoniously dubbed ‘Puppy’, by his quirky and mysterious backer, ‘Her’.

Our protagonist is on a mission into the surrounding facilities to find his brother, kidnapped by Heaven, and while he is there he is on a John Wick style mission to exact his revenge from the ground up. The story definitely had me hooked from start to finish with its quirky range of characters and intriguing dialogue. A simple story, but very effective in delivery. 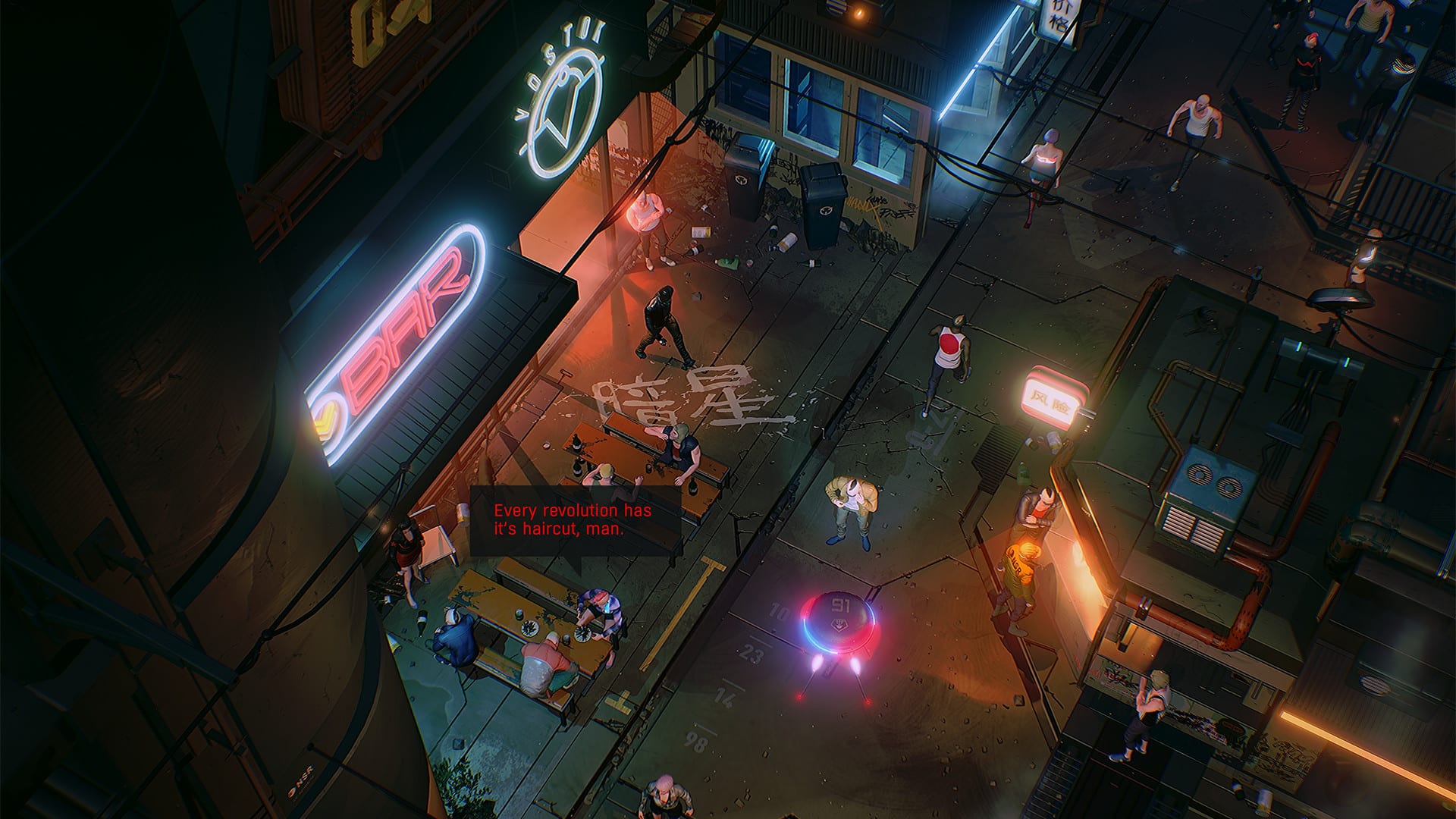 The moment you step into the game, it becomes addictive. A top-down, twin stick shooter; you must run with one while directional shooting and looking around with the other. Puppy can also use melee weapons and improved guns, both of which can be yanked off the bodies of deceased enemies or storage boxes as you blitz through the level. As you slice, dice and spray your way through waves of thugs, you will come across skill points. These will give you the opportunity to add extra abilities or a vast array of passives to our hero. These include things like a bubble shield to protect yourself from projectiles, Lich Kinging other enemies to fight for you, or my favourite the simple dash; muchly needed and included with an awesome ability to plot it across the floor for well planned out succession dashes.

The gameplay is all very fast paced and ahillerating, with each stage leading up to a boss to fight, that is oh so satisfying to defeat. The controls run like a dream on the Switch, but as usual I found the game more fluid to play with the Pro Controller, even in handheld mode.

There is also a hub like environment in between each level that also acts as a map of Rengkok city. This was a nice palette cleanser as it slowed down the game to upgrade your character and add plot devices. It was also nice to see here that you could walk around and collect minor side missions from NPC’s. This really fleshed out the story even further, ,making it feel like a lived in world and definitely added replay-ability. 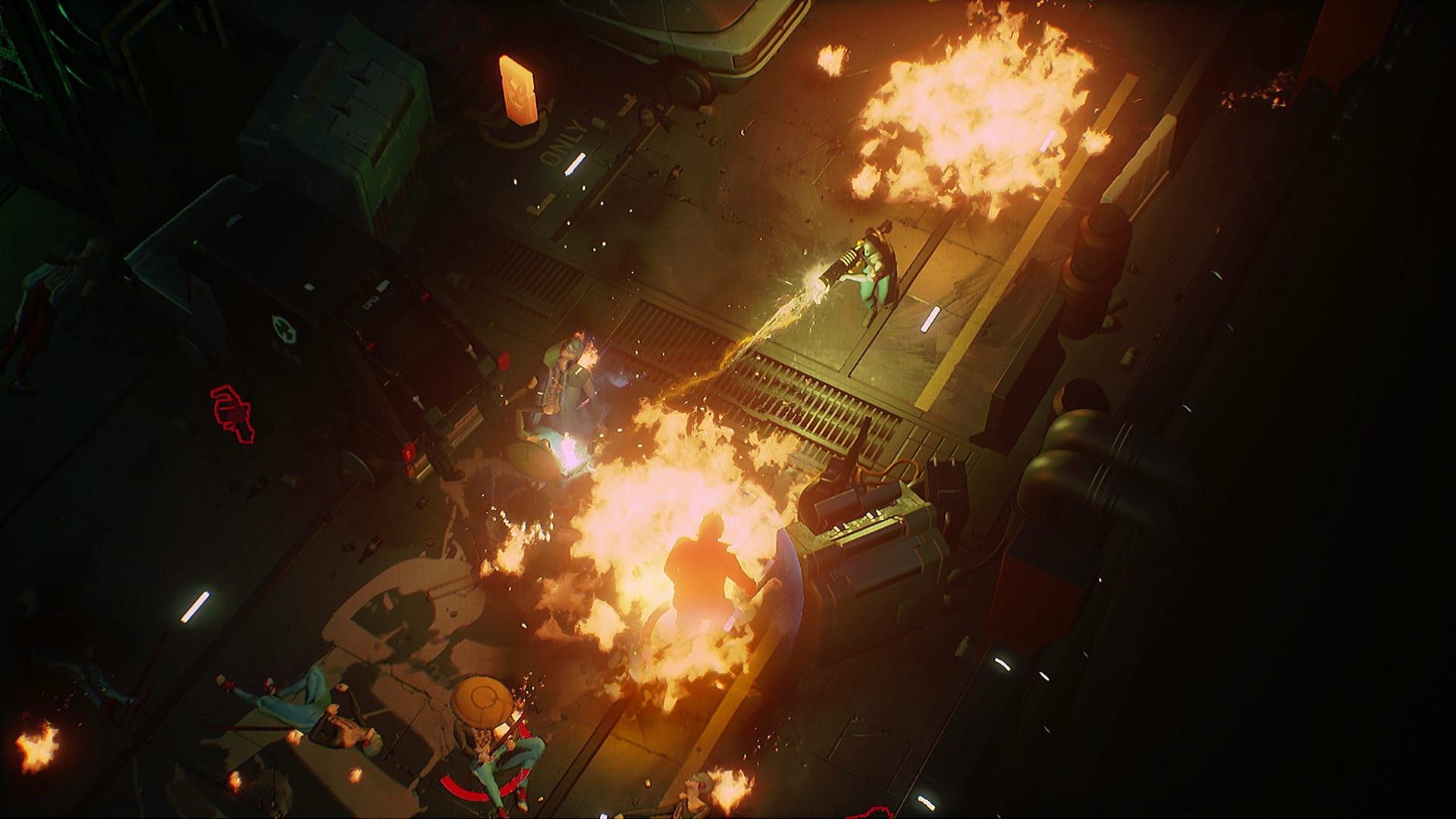 The graphics and overall atmospheric backing tracks are a symphony of neon grunge. Everything; the characters, environments and enemies are a dark and gritty hue with splashes of luminescent technological cel shaded animations throughout. When battling it out the screen is often highlighted in shades of red, really drawing you to the carnage you are about to unleash and contrasting the dim, bleak environment of our hero. The environments are nothing to dismiss though, as the world especially the hub is brimming with minute little details. From cats scurrying down alleys, bots whizzing through the air, there is definitely a lot to look at and take in. While it is definitely gorgeous to look at, in typical Switch fashion there is a graphic downgrade when docked onto a big television. One thing I did appreciate the most was the mixture of 3D cinematic cutscenes/stills and the cartoonish comic graphics that have been artistically thrown together in such an expert fashion.

The Synthwave and electro sounds of ‘Ruiner’ complement this world perfectly, with high octane beats during each level and sombre, very reflective music in the hub. Every little detail of this game has been polished for an intense experience.

Overall, “Ruiner” is a game that I highly recommend to multiple groups of people. You like top-down shooters, get Ruiner. You like futuristic sci-fi stories, get Ruiner. Heck, you got a Switch, get Ruiner. This title is a beautifully crafted journey from start to the end and I just couldn’t put it down. 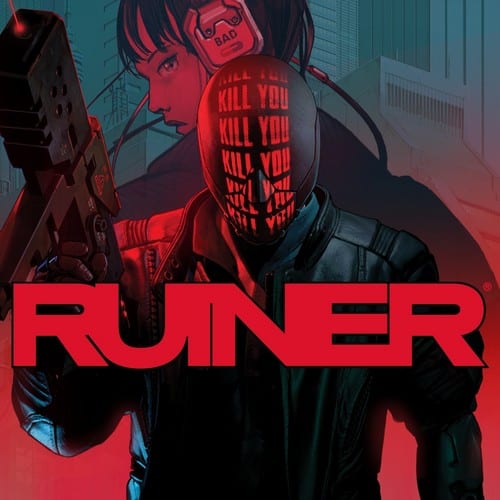 RUINER is a brutal action shooter set in the year 2091 in the cyber metropolis Rengkok. A wired psychopath lashes out against a corrupt system to uncover the truth and retrieve his kidnapped brother under the guidance of a secretive hacker friend.