Run Kitty Run is an indie game published and developed by Confused Pigeon Studios and as the name of the game suggested, you are a kitty and you must run to escape the maze you are in. The only problem is dogs patrol the streets looking to rip you apart, paw by paw.

Run Kitty Run was almost impossible to play, in theory it was meant to be my dream game; cute cats ducking and weaving between slobbering dogs getting level ups and spending coin on different consumables, but in reality, I experienced a game that was quite buggy and very hard to play to its full potential. I like to put time into these games I review, it’s only fair, but after hours of repeating the same 30 seconds and maybe achieving 2 minutes of gameplay over that span of hours became quite tedious fast.

The controls were super awkward; you use the right click of your mouse to tell your cat where to go and if you pull your mouse to the edge of the screen the map follows you. This often leaves you open to not knowing what dogs are in front and leaves you open to be hit, otherwise, you use the directional buttons on your keyboard to adjust the camera tapping as you run. This becomes an issue because you then can’t use the abilities you’re supposed to because they are used with the letters Q W E R. Unless you have the best keyboard skills known to man, this game makes it impossible to utilise all the features, unfortunately. 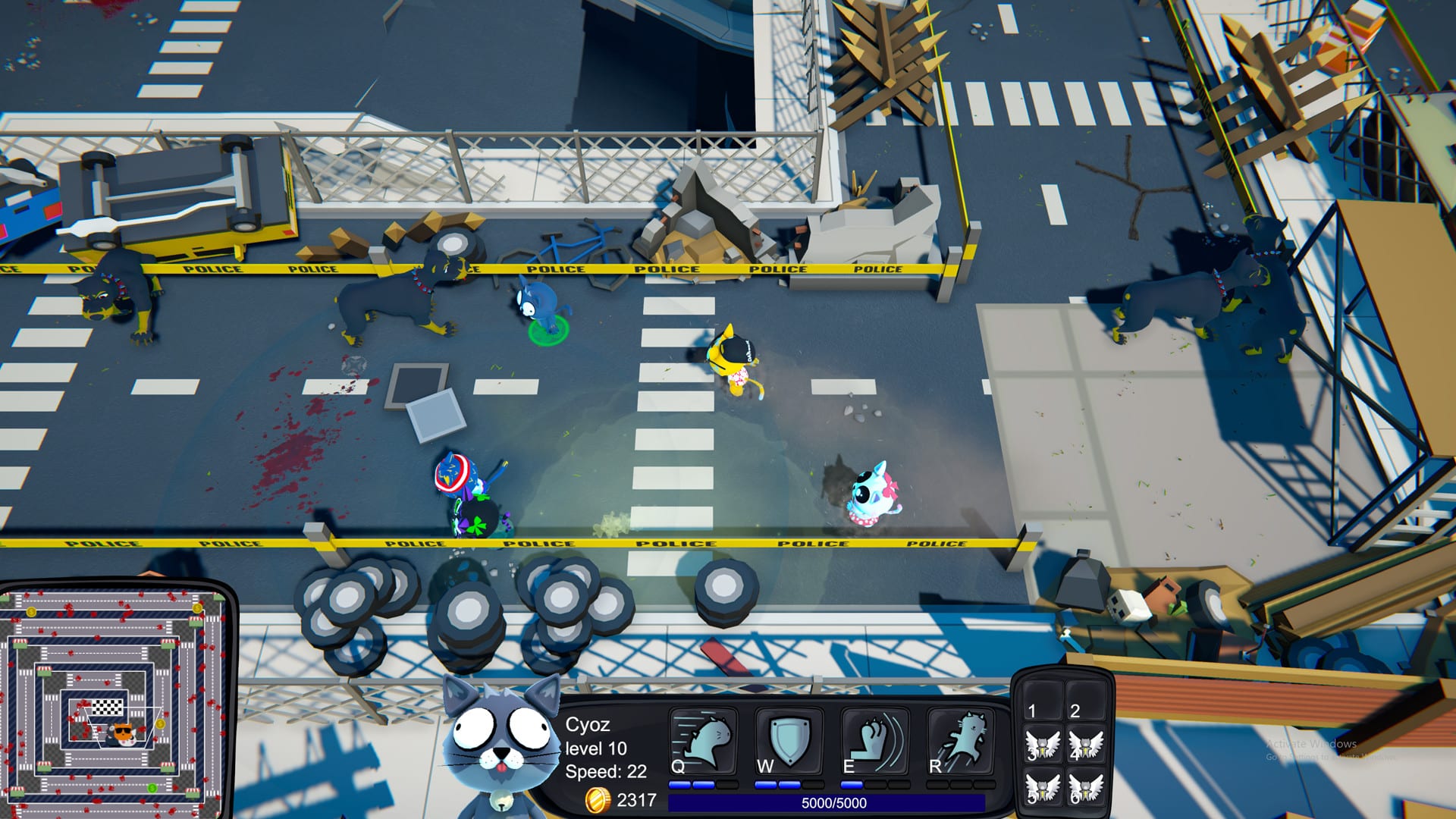 The game does offer a few different game modes for those who may be able to beat the normal mode, you’ve also got a Tutorial, Nightmare mode and Meowcalypse. You can play Singleplayer or join a random group of people or create a private group. Normal mode is normal dogs during daytime and the music is light rock repeated on a 10 second loop. Nightmare is at night time and the dogs now have red eyes and collars and the music is like a constant tapping repeated on a 10 second loop; the level isn’t necessarily harder as the glowing red can make it easier to see the dogs. Meowcalypse is also at night time and hell has come to earth as the dogs are now hellhounds. Flames and fire are on the streets too now and can also kill you.

The map for all these levels is the same, it’s basically a square box and you have to get to the centre. The streets are just straight lines with a fence keeping you in but in every corner of the street is a safe zone that the dogs can’t get too. Every top left corner of safe zone is a checkpoint, if you die you respawn there. In each of these safe zones are a little makeshift lemonade stand where you can buy items with coins, you can pick up coins along the way or from getting to a new safe zone. You can buy a few different things like a potion that brings you back to life where you died, a bone you can throw to distract the dogs, plus more. At these safe zones, you also receive experience that turns into points for abilities, that using the Q, W, E, R, keys accesses. They can increase speed for a short time, make you invincibility for a few seconds, produce farts that push the dogs away and lastly, a dart that propels you in a direction for a small jump. 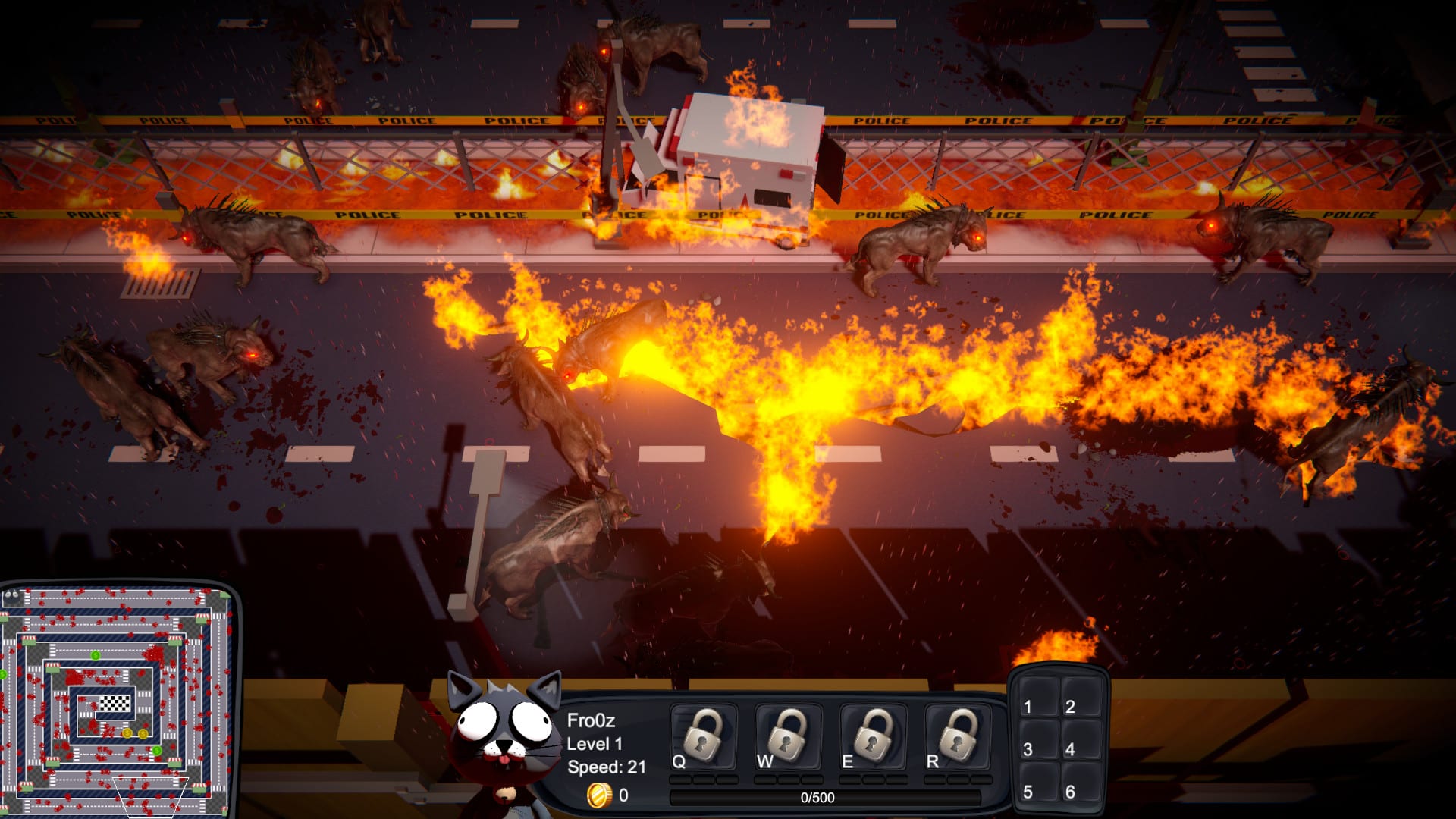 Now, even if you ARE an awesome keyboard warrior, the dogs (the little buggers) have no rhythm meaning they can’t be mapped out or you can’t watch for a sequence of moves. They don’t run at you but just move in lines across the screen. You may think since they are facing away, you’re safe, but alas NO, they bout turn and whack you, not out of malice but sheer annoying mechanics. They’ll also turn sideways, run for short bursts or even longer ones and all you can do is just run and hope your quick enough with your clicks.

The bugs in the game also make for frustration. The only times I got near the finishing line when I got hit by a dog, I respawned at a checkpoint and ended up trapped between 2 streets in the fence unable to move. This game doesn’t have a save point, just checkpoints while you’re playing. This meant I had to start the level AGAIN after each death. When the player respawns, your kitty just wanders off and because the camera takes you back to the starting point not your kitty/checkpoint by the time you’ve found it, they have been hit by a dog again, resting the camera again.

A couple times, I didn’t even end up at my checkpoint, but halfway through one of the streets and only noticed this because I was looking at the mini map on the left side screen. On top of all this, the game had a few typos, very lacking in the editing stage, I guess. It probably could have used a few testers before the initial release. 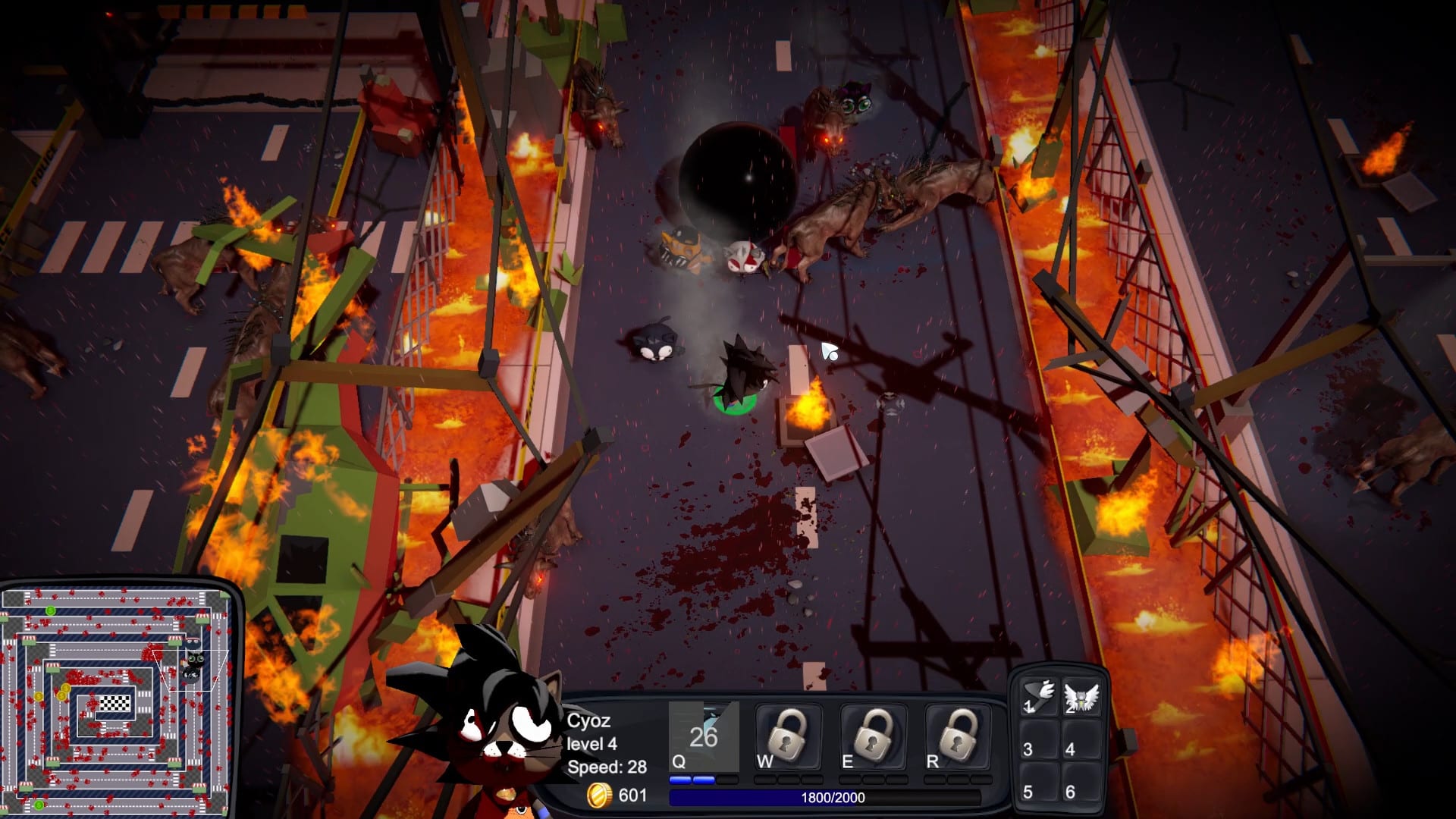 The artwork is simple but really impressive. The streets have debris lying around; from boxes to actual planes, and the dogs are exactly the same but detailed well. During all modes, you get sirens and traffic noises as well as the dogs growling and the cats meowing occasionally, the cat also meows if you get hit by the dog. Creating that atmosphere of a Cat vs Dog brawler.

You can also pick different character cats; you’ve got Aurora, Chad, Bobby, Meowsha, Catkaroto, Catros and Meowker. The final three are cat themed pop culture references; Kakarot from Dragon Ball Z, Kratos from God of War and The Joker. It looked like more characters could become available too. The designs are pretty cute the cats all walk on 2 legs and wear the cute outfits. Each character has a little backstory that seemed kind of out of place such as Aurora who is a sex addict and stalker, Chad the Cat who talks in the third person and is a jackass (Jackass is mentioned twice but spelt wrong the second time), for example. It felt a little unnecessary giving the cats mature aged backstories that really bares no impact to the game.

Overall, this game had heaps of potential but missed the mark by a long shot. Alas, I would love for someone to challenge me and tell me to “Get Gud” but it is undoubtedly obvious that Confused Pigeon Studios may need to go back in and fine tune some features. In the meantime, I just will wait it out and see what becomes of Run Kitty Run. 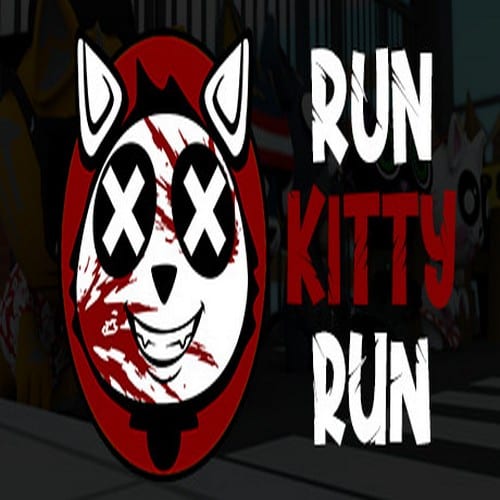 Run Kitty Run is a chaotic online co-op game that teams up to six players in which you and your fellow kittens must work together to get through maps filled with dangers. Use wisely your set of skills and purchasable items to aid you in this adventure.