Sam & Max: Beyond Time and Space

By Shane Fletcher on December 9, 2021 on Reviews, 7 More
close [x]
Tweet
No Comments

Ah, the old point-and-click adventure games. They come and go in popularity but have remained a staple of the gaming industry. Sam and Max have been in the game since the early 2000s, and the anthropomorphic freelance police force duo has been remastered… Again. Thanks to Skunkape Games, the remaster of Sam and Max: Beyond Space and Time is out now across all current platforms including Pc, Xbox, PlayStation, and Nintendo Switch

An episodic game which is a “season 2” style approach following Sam and Max: Save the World game, which was only recently remastered as well, offers multiple outings that need no prior knowledge to enjoy.

It may help though, as the idea behind Sam and Max are quite out there, with Sam being a 6-foot tall dog with a deadpan attitude and somewhat long-winded comedic delivery, feels like a parody of old-school noir detectives from the ’20s, while Max, the chaotic rabbit, who left unchecked could probably cause more trouble than the fiends they face. 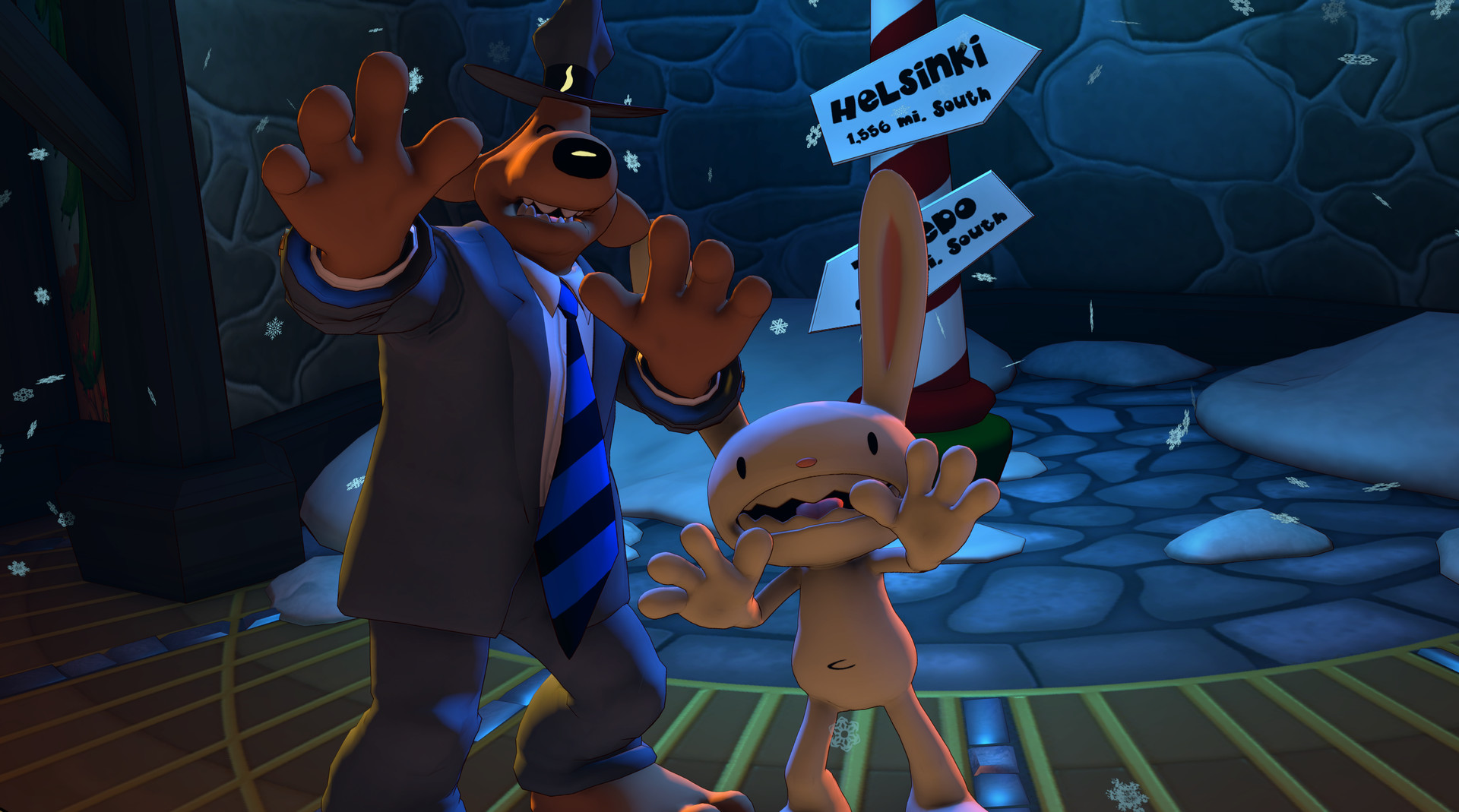 Originally a Telltale creation, this series is a more forgiving version of their games compared to the more recent Walking Dead series. While trying to solve the environmental puzzles or navigate the conversations there was little to no risk of encountering a game over screen. There was a lot more emphasis on the dialogue with every second line being as wacky and zany as the last one. Truth be told, not every single line was a winner, but its consistency was key to keeping the narrative weird and wonderful. I mean, it’s not often you get in a trivia battle with a talking statue head of Abraham Lincoln or a gruff cockroach in a stinky diner.

During the first episode, you will travel back and forth between home and the North Pole thanks to your more than capable police vehicle, the Dosoto. If that wasn’t weird enough, then why not deal with a possessed Santa Clause that has an itchy trigger finger. There were plenty of clever little clues that would all link back up in the end, but there were also a lot of vague and ambiguous situations too.

Having to travel back and forth wasn’t the most entertaining mechanic and often felt like there was a little too much padding. Quite often there are trails that lead to mini-games to progress the story, and while they can offer a chuckle, they didn’t really offer much other than being a little weird for the sake of being weird. 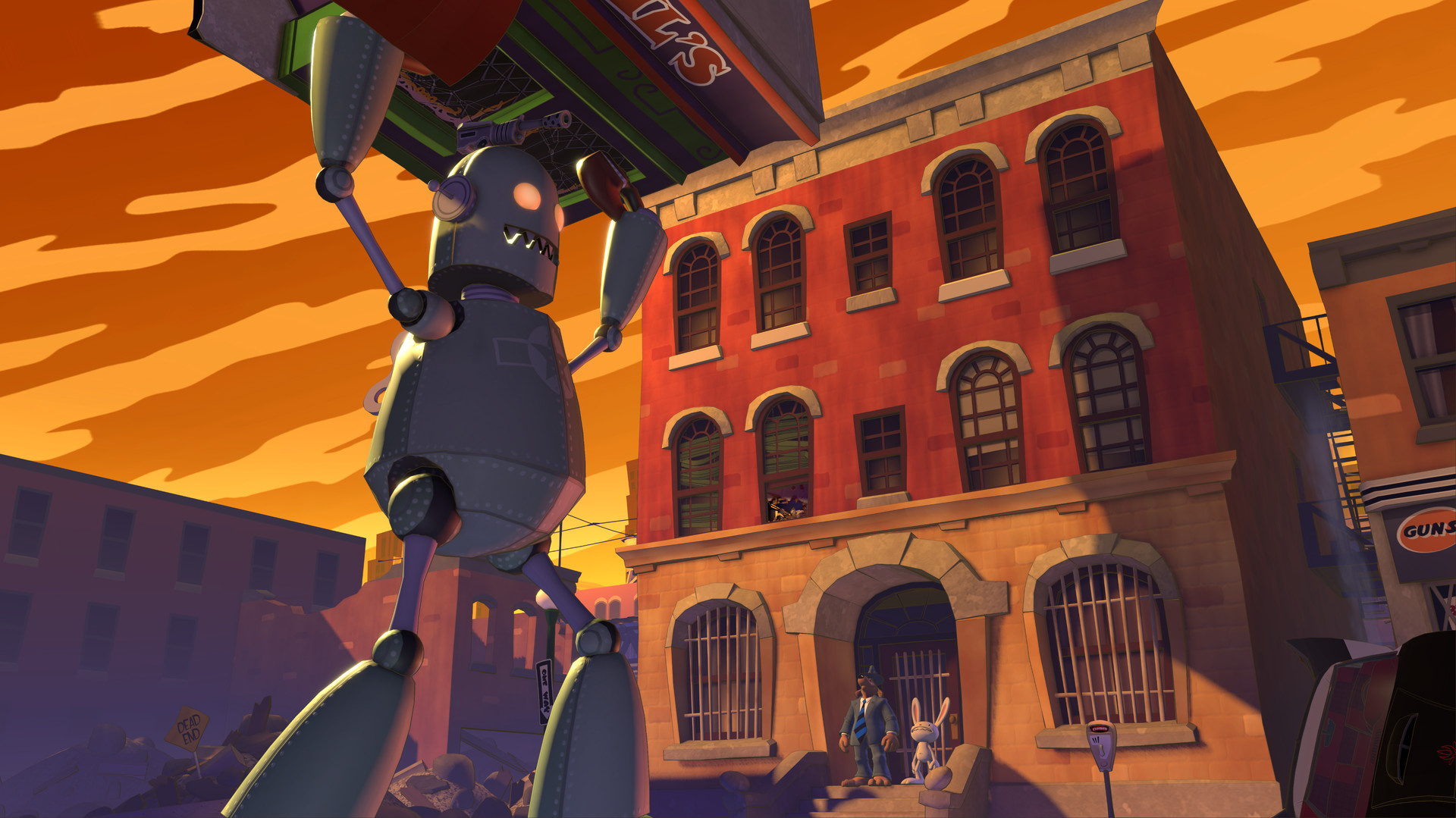 The distinctive art style of Sam and Max does add to the charm of the experience, and with the remaster it has become much clearer and more defined. The character models are much smoother but still maintain a clunky awkwardness about them. Even though you travel to and from through time, and travel from the North Pole to literal volcanoes, each playable area feels quite closed off and a little cramped. If it didn’t maintain a cartoony aesthetic, then it may not have worked, however, the jazz-inspired soundtrack and silly sound design form a complete picture when you marry it all together.

There were a few situations where I encountered some issues. A couple of locations would have frame rate issues and sometimes the music would cut out, not fixing itself until I left the area. Holding down L reveals dots on interactive items, but even when scrolling through them with the right thumbstick and confirming, it could still activate the wrong selection. There is a few options that have been added into the game under the accessibility settings. You are able to increase the hint level which will trigger Sam and Max to think aloud when you get stuck during a puzzle. The issues I faced were the hints often stated that I “had” to do something rather than “how” to do something. I do like to figure things out on my own, but more than once I just started scrolling through every item I could and clicking on things to brute force my way through.

A long-time fan of the series may get more value out of this remaster than a newcomer, but either party will still walk away with one of the funniest adventures from the 2000s. The five episodes available in this game will offer between 10-20 hours’ worth of gameplay, and being able to take it on the go with the Nintendo Switch was a great way to play.

Sam & Max: Beyond Time and Space 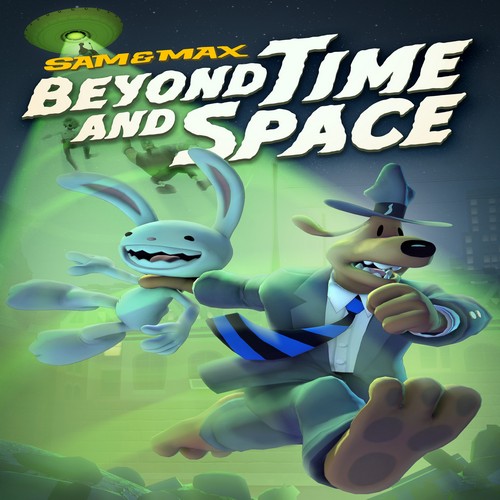 The Freelance Police are back on the crime beat in a newly remastered version of their second episodic season. Zombies will dance. Mariachis will sing. A giant battle robot will trash the streets.