‘She Remembered Caterpillars’ developed by Jumpsuit Entertainment is like an onion. On the surface it looks like a typical puzzle solving game, nothing too special, but as you dig deeper through the layers to the core, there is actually a deep narrative hidden within.

She Remembered Caterpillars is not a new game, being released in January of 2017 but has been ported over to the Nintendo Switch. A perfect decision in my opinion, as the Switch is definitely a console made for arcade like puzzlers. Gameplay is very similar to another indie gem, ‘Death Squared’ a game I thoroughly enjoyed and felt was very much underrated.

You play as a range of brightly coloured, cute microparasites called ‘Gammies’, that must use their colours and shapes (the colour blind have been thoughtfully included here) to solve puzzles on artistic islands and get to each of their own, little launch pads. You can swap between each quirky Gammy to traverse through a course of bridges and doorways that only allow certain colours through. You need a basic understanding on primary and secondary colours because eventually you develop the ability to merge Gammies to create new colours and new possibilities to solve these sometimes simple, sometimes difficult brainteasers. This was a very creative and interesting game to play and really took another angle on a traditional puzzle game.

Gameplay aside it was the hidden story that had me even more intrigued to keep playing. In between each level are what first seems as random bits of nostalgic rambling, but they soon become very detailed insights to the inner going ons of a tormented soul. It has themes of love, loss and death and dealing with the after emotional pain. While these quotes seem oddly placed at first, as they progress and you jig saw them together, you see the overall picture and the release the puzzles deliver for the writer of the narrative.

The game is broken up into acts and a varying number of levels in each. All up there is 40 plus levels that are at times very frustrating to complete, but after a lot of trial and error you do get there eventually. While there are a lot of levels they don’t have much replay value, as once you solve them, there isn’t much incentive to go back and play them again. Another reason people may not enjoy this game is the fact the pacing is driven by you. You may sit there for ages solving a puzzle, you may get bored by the lack of action and you may be the one to put it down and never play it again after giving up on a level.

The game runs like a dream on the T.V. and in handheld mode, but this time I did prefer seeing it on the big screen with a pro controller, so I could take in all the intricate details in. To be honest I felt like I could visual my strategies to complete the level better. Crazy right?

The visuals are hauntingly beautiful in this game. While they are simple, it is almost as if they are tell there own silent story of despair. The background art is uniquely hand drawn adding to that personal feeling that the embedded narrative already establishes. Looking like a calmly painted watercolour painting, the soft music and soothing sound effects compliment it perfectly.

Overall, She Remembered Caterpillars is a beautifully peculiar puzzler that is oozing with personality, character and heart. This is one cute little game that will certainly have you thinking more than just about its puzzles. 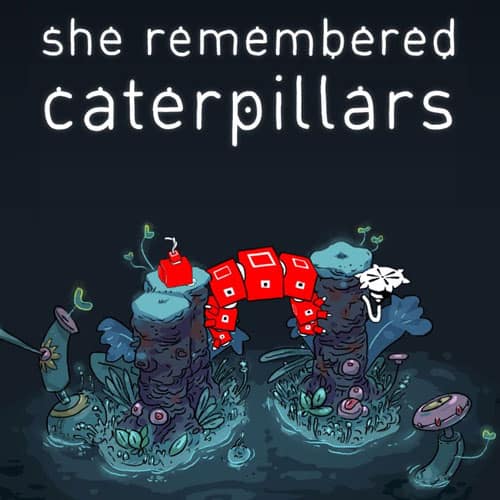 She Remembered Caterpillars is a color-matching puzzle game with an unsettling fungipunk aesthetic. Set in a phantasgamorphic world of writhing caterpillars, brightly-colored Gammies, and living architecture, the game will have players eavesdropping on what appears to be one scientist’s quest to save her father.