Sniper Ghost Warrior: Contracts happens to be the fourth entry of the Sniper Ghost Warrior series from CI Games, a Polish video game developer and publisher based in Warsaw. Since its founding in 2002, CI Games has created a number of budget conscious games, but is best known for both the Sniper: Ghost Warrior, and the Lords of the Fallen series.

I had no idea what I was getting into with this title, as this is my first foray into the Sniper Ghost Warrior franchise. Not that I’ve been avoiding it, I just haven’t been big on simulation type games where everything is taken into account. I am quite happy to simply point and shoot. BAM! “Enemy down. Where are the rest of his friends?” This is more of a, “Right, he’s there. I’m this far away and the wind is 8kms an hour going West. I’ll have to aim here for a head-shot.” Here I was, thinking it was just another shooter game and I’d be the One Man Army of Anarchy. Needless to say, things didn’t go as planned. So how did I fare? Read on and find out.

Single Player/Contracts
Starting off the game, I was quickly drawn into the story as the narrator identifies himself only as the ‘Handler,’ and gives your bad-ass assassin for hire the code name, ‘Seeker.’ The first mission you receive is pretty much the tutorial, with the ‘Handler’ explaining about the mask they have sent you. Effectively working as your HUD, The mask works in numerous ways. From acting as binoculars, updating objectives as you complete them, or displaying the extraction points on the map after completing your mission. I usually had five or six objectives each map at any given time, ranging from assassinations, to challenges and bounties. 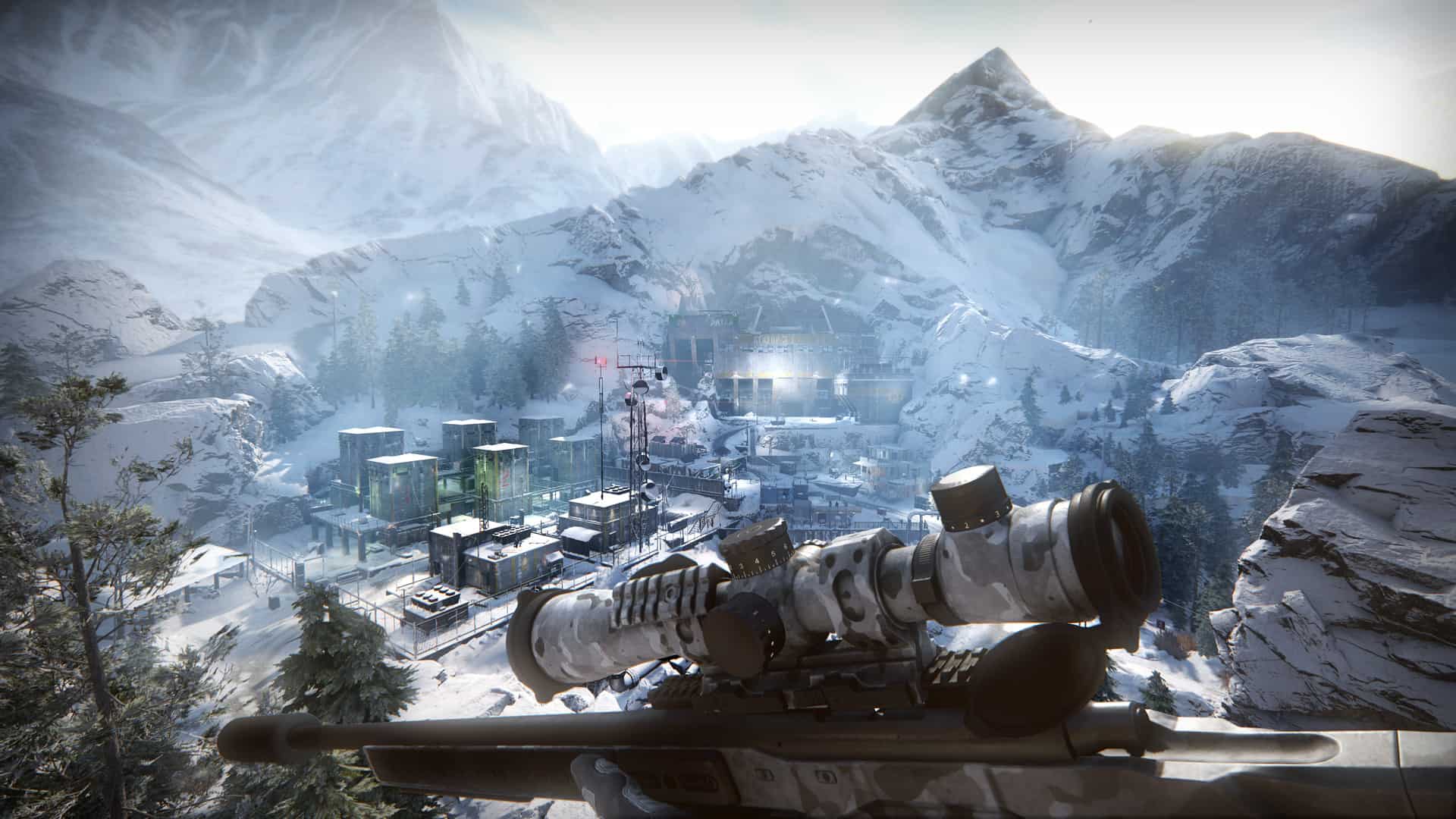 As you’re working in the harsh and unforgiving environment of Siberia, your area of operations could be anything from snow covered mountains to enemy strongholds, lush forests or frozen lakes. Filled with open ended missions on decent sized maps, you will have quite a bit of time to admire the scenery while you traverse back and forth looking for the best way to complete your objectives, avoiding enemies ranging from the traditional soldier to armoured behemoths toting heavy weapons, or even worse, a rival sniper trying to steal your contract or take the bounty on you. There were quite a few times found myself restarting a mission, struggling to find where they were hiding before they had a chance to turn me into another corpse, just like the soldiers I had been destroying.

In saying that, on completion of objectives or bounties, you’ll be rewarded with credits to be used in upgrading weapons and equipment, including the chance to upgrade the technology in your mask; tech that makes you able to hear conversations between soldiers or easily identify weak points on vehicles.

I have been saving for the personal drone, its extra sensors would surely help me in locating those pesky hidden soldiers, reducing the number of times I’d wander into a doorway only to be filled with shotgun pellets. On top of upgrading your weapons and load-outs, you are also given the option to purchase special ammo; EMP rounds, lures, trackers, or my personal favourite, Explosive rounds. Just what a silent assassin like me needs. 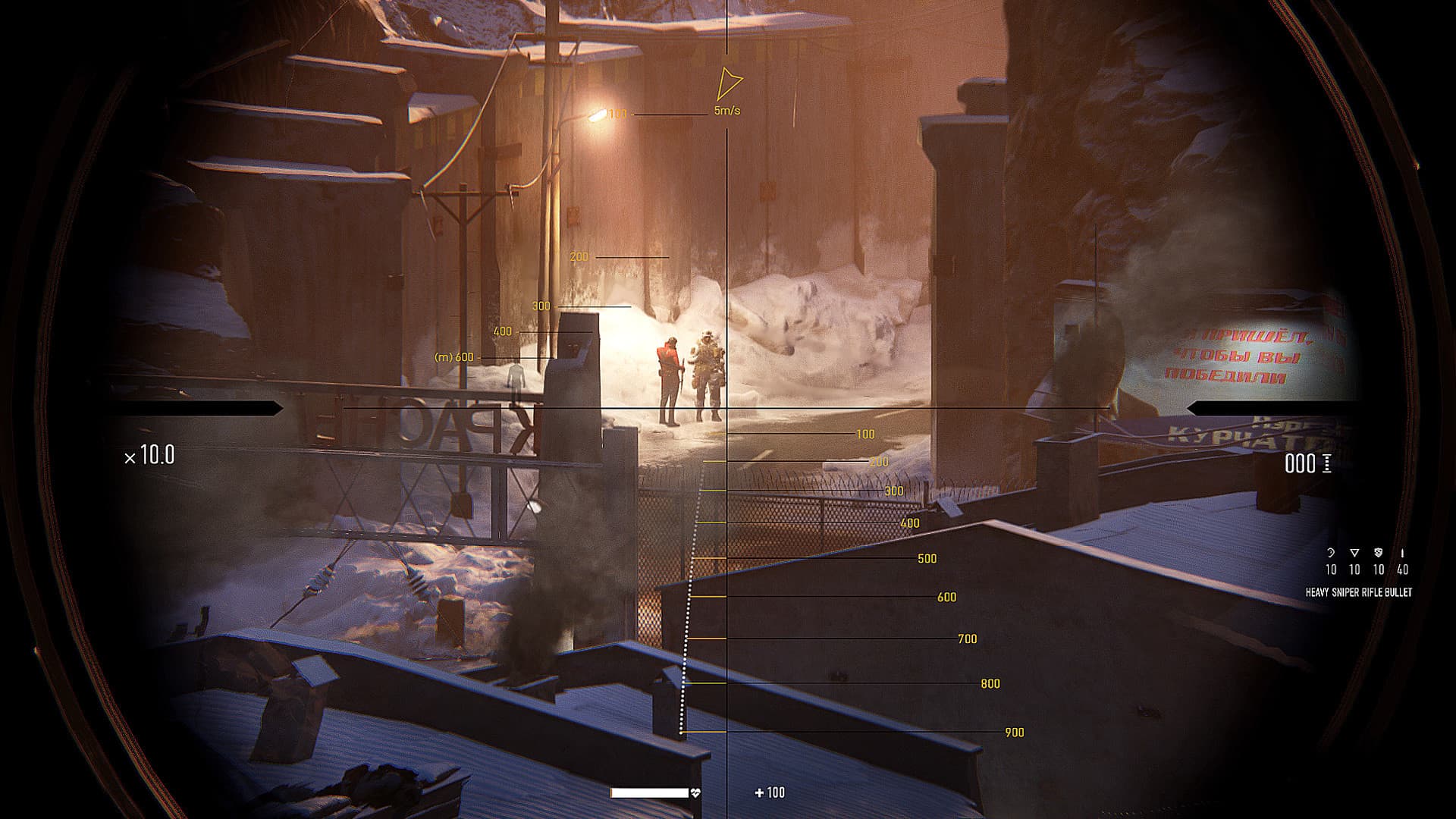 Gameplay
I played this on the Xbox One S, and the maps look amazing. This was fortunate, considering I’d spend on average 40+ mins in a single location. This would depend on how lucky I was with finding auto saves. Dying on my way to an extraction point, only to find my last auto save was 30 minutes ago with all the enemies back up and patrolling made me rage a little more than I care to admit.

Even when I tried to play the game as intended, taking my time moving into position unseen and planning my shot, I found the AI seemed to lock onto my position the instant the body was found; a hail of bullets peppering the lighthouse while mortar shells rained down. There were other times, carefully lining my shots and steadying my breathing, I’d pull the trigger and nothing would happen.

I’d spam the button to shoot thinking it was my controller, only for the rifle to work perfectly fine when fired from the hip. Other times while zoomed in on a target I’d notice they would be carrying invisible rifles – what kind of technology is this?. One saving grace is the bullet cam; a slow motion video that started making me laugh uncontrollably, shooting an enemy in the arm to watch it fly through the air, or a head-shot that resulted in four or five different pieces and bloodied brains decorating the surroundings. It was insanely enjoyable and made me forgive the other issues I had encountered. Pure gold! 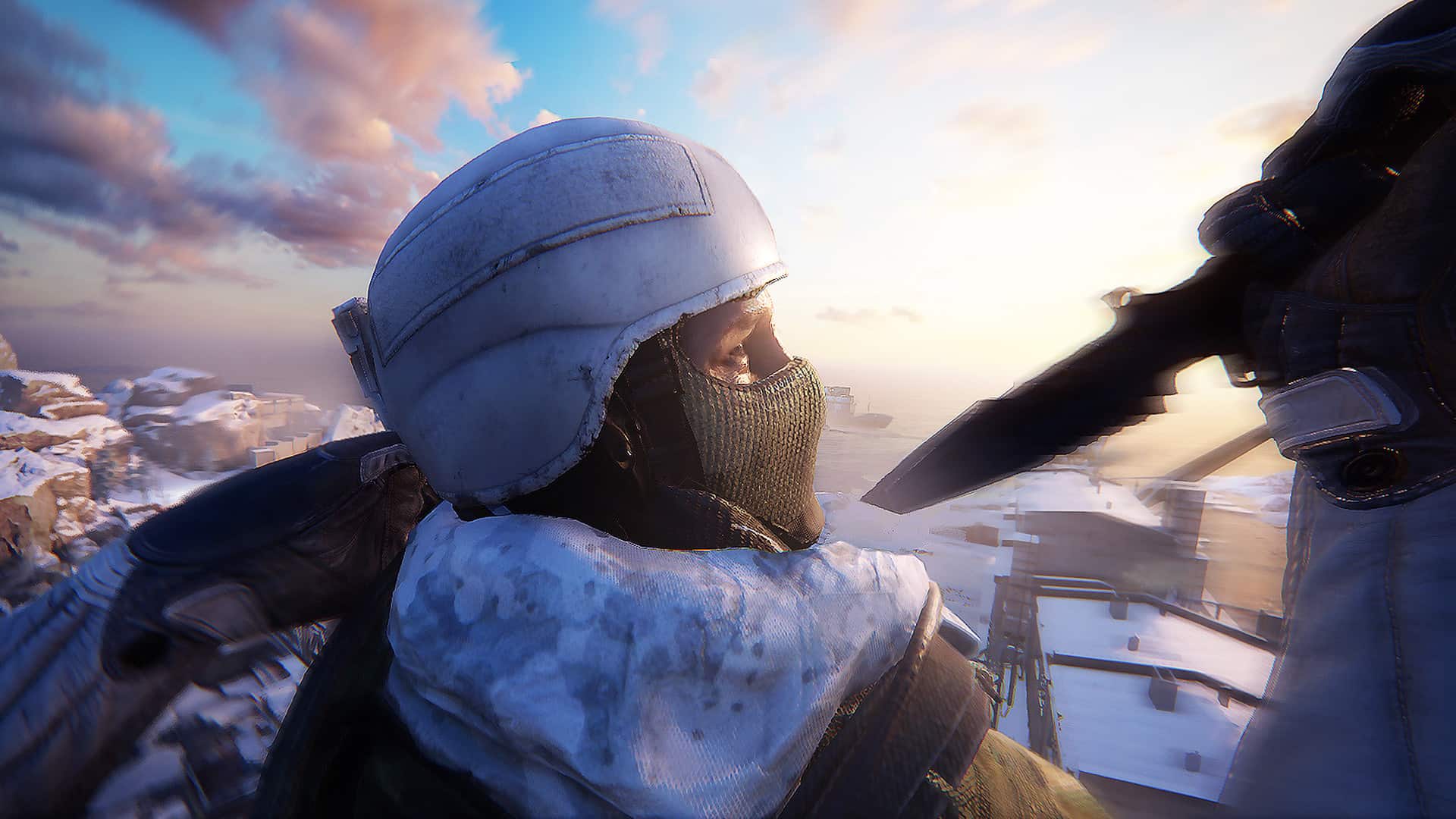 Visual/Graphics
Sniper Ghost Warrior: Contracts is very appealing visually. I quite enjoyed travelling back and forth in all the maps, especially after removing the threat of death. It was great not having to worry about anything until reaching my next mission objective, taking in the sounds of snow crunching under my feet, or gazing at the night sky, shining with the Northern Aurora lights. Lighting within the game was amazing, with buildings and enemy compounds looking suitably war-torn. The only thing that really pulled away from the graphics, for me personally, was the existence of vans that had seemingly been added on a whim, looking completely out of place.

Controls
I’m sure you know how shooter games work by now. (LT) will have you looking down sights, while (RT) will pull the trigger. It’s simple stuff. The fun starts with the tutorial, which is quite a bit to take in. Learning to predict movements, check for wind speed and direction and accommodating for bullet drop, stuff that is best explained in the tutorial. If I was to try, it’d be like someone was trying to teach a frog to fly.

Critique
In saying all this, I quite enjoyed my time with Sniper Ghost Warrior: Contracts, with an exception for the rage-inducing deaths before reaching a save point. The missions and bounties were highly enjoyable and rewarding, while the slow motion bullet camera was outrageously amusing. Trying to judge and take in all the factors for a kill were a little irritating for me, so I’ll be going back to the tutorial and actually paying attention. Now that I have a bit more time to enjoy the game, I’m going to see what other mayhem I can unleash. Until next time, peace! 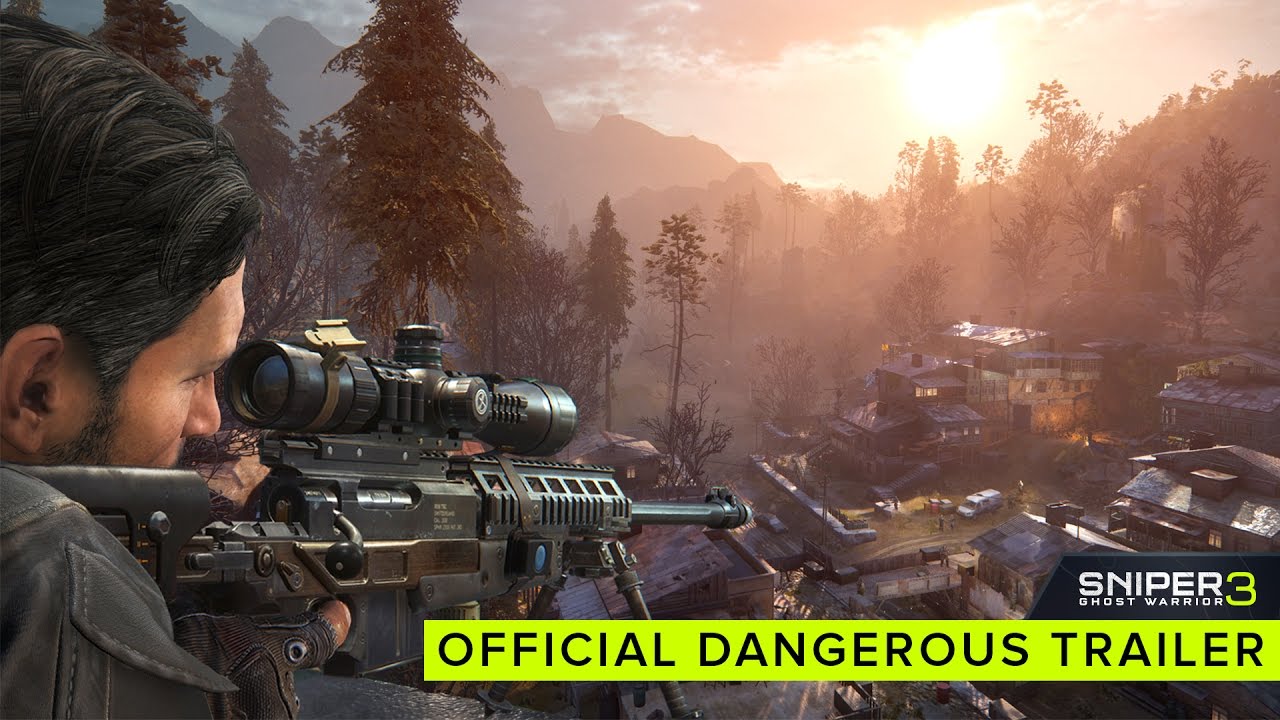 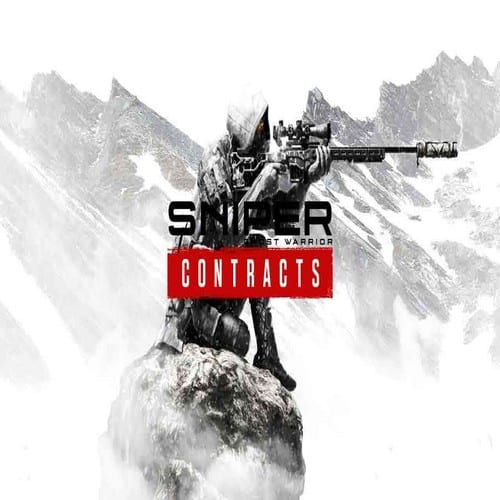