By Mathew Lindner on June 4, 2019 on Reviews, 6 More
Tweet
No Comments

When you tell people you work as a reviewer for a gaming website, they generally get very excited, “Oh, you get to play all the cool games before they’re released!” or “Oh I’ve always wanted to do that! It must be so easy!” The reality is quite different. Now don’t get me wrong, I am forever grateful of this opportunity and as anyone else in the group will tell you, it is an incredibly rewarding experience.

While we do get to work with some incredible companies and we all look forward to AAA season, there are a few overlooked downsides. We can’t play the games the way others might. We play the games a different way; a way that is more exploring every last detail as fast as possible instead of playing to enjoy it. Some games are really easy to write for, and others… well… You struggle to bring yourself to play them, and writing anything about them becomes all the more difficult. Unfortunately, this is where Super Cane Magic ZERO by Studio Evil for the PS4 comes in, and we’ll start with the main reason I struggled to play. The music. My ears were assaulted with an eight-bit soundtrack from the very beginning while the bright screen flashed “Press Something.” Following the simple instruction I started the game. More eight-bit music blasted my poor ears and I was greeted with slides of text and pictures that change too quickly to appreciate. When I finally had a chance to do something, I was treated to a horrible noise representing the characters speaking. We’re not off to a good start, but on the up side, the music changes with each different location you visit.

The artistic style of the game is a mixture of the Adventure Time cartoon and something you’d expect to see drawn by a six year old. The playable area is reasonably detailed while characters are little more than a circle for a head, a rectangle for a body and a couple of sticks for legs and arms. This kind of fits in with the writing for the game, and you’ll be expected to read a lot of it, as there is no voice acting in the game at all. It is crammed full of jokes and silly conversations you may have found funny when you were nine or ten. Bright colors, simple characters and walls of childish text? I’m starting to sense a theme. One thing that Super Cane Magic ZERO does offer however, is reasonable game-play. Aimed at groups of younger players, you can play the story mode with 3 other friends. Each player given the choice of “class” as would be typical with any RPG out there, with healers throwing candy around to restore the health of allies; area of effect attackers causing an explosion of bacon in their immediate vicinity, or the crowd controller freezing opponents with her minty-fresh breath. Players will be able to level up their chosen character and pick skills from a very restricted skill tree while playing through the story. Unfortunately this is punctuated with excessive loading screens.

I had to sit through a two minute load screen with the game telling me that “remembering to take multiple breathes while gaming” was a “pro tip.” I’ll give you one for free here: The game focuses heavily on mashing your attack button, waiting for your enemy to collapse, and picking them up and throwing them at other enemies for maximum damage. As a side note, for those who are more interested in PVP, you’ll also be given the opportunity to show off your skills in the Arena mode, where players can throw their prized champion at other players and fight for dominance. Nothing really special here. As I said in my introduction, sometimes you are given a game that is difficult to play and even harder to write about. Super Cane Magic ZERO was one of these, and while it may appear that this game is horrible based on what I have written, its target audience would most likely disagree. I would expect that my workmates eight year old daughter and her friends would find it absolutely hilarious, and the art would be “like, so cute!”

As a game that appears to be designed to get younger people playing RPGs, I feel it has certainly done its job. It’s perfect for young gamers, with enough bright colors to draw them in, and levels short enough to keep them interested long enough for parents to catch a much needed break. You’ll just want the kids playing in a completely separate room, with the volume as low as possible. 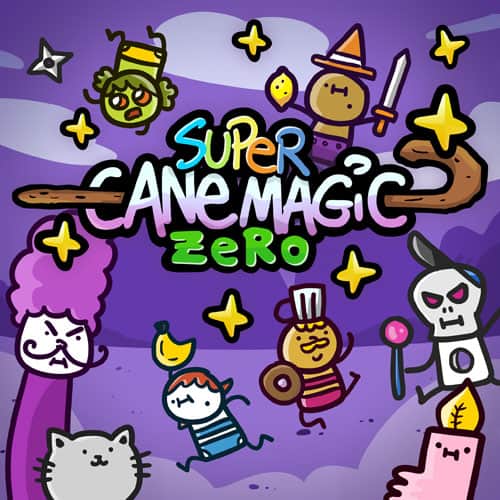