Sword Art Online: Hallow Realization – Deluxe Edition on the Nintendo Switch is a port of the original game released on the PlayStation 4 and PlayStation Vita in 2016 and was published by Namco Bandai Entertainment and developed by Aquria. It is also based on the hit anime series Sword Art Online, an online game where players can also be affected in the real world where the game’s story takes place after the end of that story arc. The Deluxe Edition includes exclusive digital content with Warriors of the Sky Update and Abyss of the Shrine Maiden Season Pass.

The game begins by customizing your avatar which you’ll develop and upgrade throughout your adventures. By default, you’ll have the series’ main character Kirito to edit to your liking. There are a wide range of customization options such as your own unique name, gender, height, hairstyles, facial features and different colors for almost everything. You will also be allowed to pick your desired weapon from the start including swords, daggers, axes, spears and more, but you will be able to collect more weapons as you progress throughout the game, as well more outfits since at the beginning you will only have Kirito’s iconic trench coat. You can also simply play as Kirito as he is and head straight into the game. The story begins with an animated cut-scene of Kirito in a familiar world where he was once trapped. He meets a mysterious girl with a cryptic message, “I am back in Aincrad” which then leads into an in game cut-scene with familiar characters from the franchise Lisbeth, Silica and Asuna battling a large beast. Your avatar will then appear to assist them and begins the game-play tutorial. Here players will learn the basics of attacking, defending, strategies and teamwork to take down enemies. The battles are more than just simply attacking monsters until their health bar depletes, you will also be encouraged to coordinate your team to work together and land devastating group attacks for maximum damage. The tutorials can be slightly unclear and difficult to understand, but incredibly rewarding once you get the hang of things and pull off epic team combos. The bigger the combos, the higher the damage.

After conquering the beast in the tutorial, you will be transported to The Town of Beginnings where players can organise their quests and upgrade their avatars through various shops using in game currency. You will also be welcomed by the series’ many familiar faces. The town has over 300 characters you can interact with, but it doesn’t feel like there’s much happening in this fictional community and feels outdated especially when compared to other online open world online games. Majority of the cut-scenes throughout the game are simply still shots of the characters speaking with very little animation, however the developers did go the extra mile of giving all the main characters voice overs (in Japanese with English subtitles) giving the game more life. These cut-scenes can start to drag not long after and make you feel like you’re barely playing the game, but die hard fans of the franchise are more likely to enjoy lengthy dialogues of their favorite characters. After exploring the town with Asuna, you’ll be able to select your quest which is where the real fun begins.

There are various unique locations to explore with a variety of different monsters to battle with to gain loot and XP for upgrades. The upgrade system will feel complicated and overwhelming at first and will take some time to get used to if players are willing to commit to it. In your quests, you will have your target monsters to take down with your team, but there will also be other monsters around to hunt down if the player chooses to. Linking up with other players online is encouraged using everything you learnt in the tutorials to battle the various large beasts. As you progress further in the game, the monsters you’ll encounter will increase in difficulty and can earn even bigger rewards. Conquering these beasts can be really exhilarating and rewarding, but may start to feel repetitive after awhile. You will face some unnecessary obstacles such as the camera not cooperating and the environments such as large trees in the foreground obstructing your view of the action. The game does feel similar to the Monster Hunter series, but unfortunately pales in comparison to highly successful franchise by Capcom which offers so much more.

The game’s graphics was clearly catered for the PlayStation Vita version and left mostly untouched with the ports to other consoles. The visuals are crisp and clear when comparing the different console versions to each other with very little difference between them. However, the graphics do feel outdated even on the Nintendo Switch which is capable of producing higher quality visuals than the PlayStation Vita.

While there are many other games in the genre that offers players a much more immersive experience, fans of the anime series will find plenty to enjoy in Hallow Realization that will make them feel part of the world of Sword Art Online. 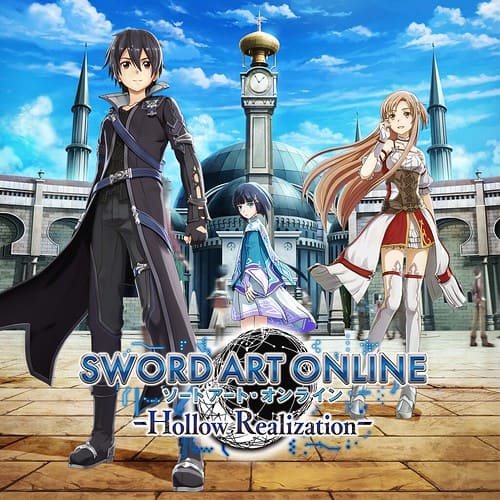 Sword Art Online: Hollow Realization is a video game developed by Aquria and published by Bandai Namco Entertainment for the PlayStation 4, PlayStation Vita, and Windows PC, based on the Japanese light novel series, Sword Art Online.