Originally released in 2016 on Steam and PlayStation 4, the turn-based strategy game about space survival is now available on Nintendo Switch. Published and developed by Choice Provisions with Zach Gage as the lead designer, Tharsis puts players in charge of a spacecraft and a team of up to four astronauts, on the first manned mission to Mars. During their journey, their spacecraft gets hit by a meteorite storm and the crew must resort to extreme measures in order to survive.

The game begins with a very helpful tutorial explaining how this unique game works. Tharsis has some board game elements with dice rolls relying on luck to successfully complete the game. Each crew member has their own area of expertise with advantages and disadvantages, constantly coming into danger with the spacecraft being damaged by space debris. It’s up to the player to overcome these threats and try to keep everyone alive against seemingly impossible odds.

The gameplay heavily revolves around dice rolls, which means the player’s success or failure is purely left up to chance. There are eight sections of the spacecraft from the cockpit, medical bay, laboratory and more that require constant maintenance and repairs depending on which sections are damaged. Each crew member gets one turn each per mission and damaged sections are highlighted by a number that displays the level of repairs required. The number displayed is the total number of dice needed to repair the damages. 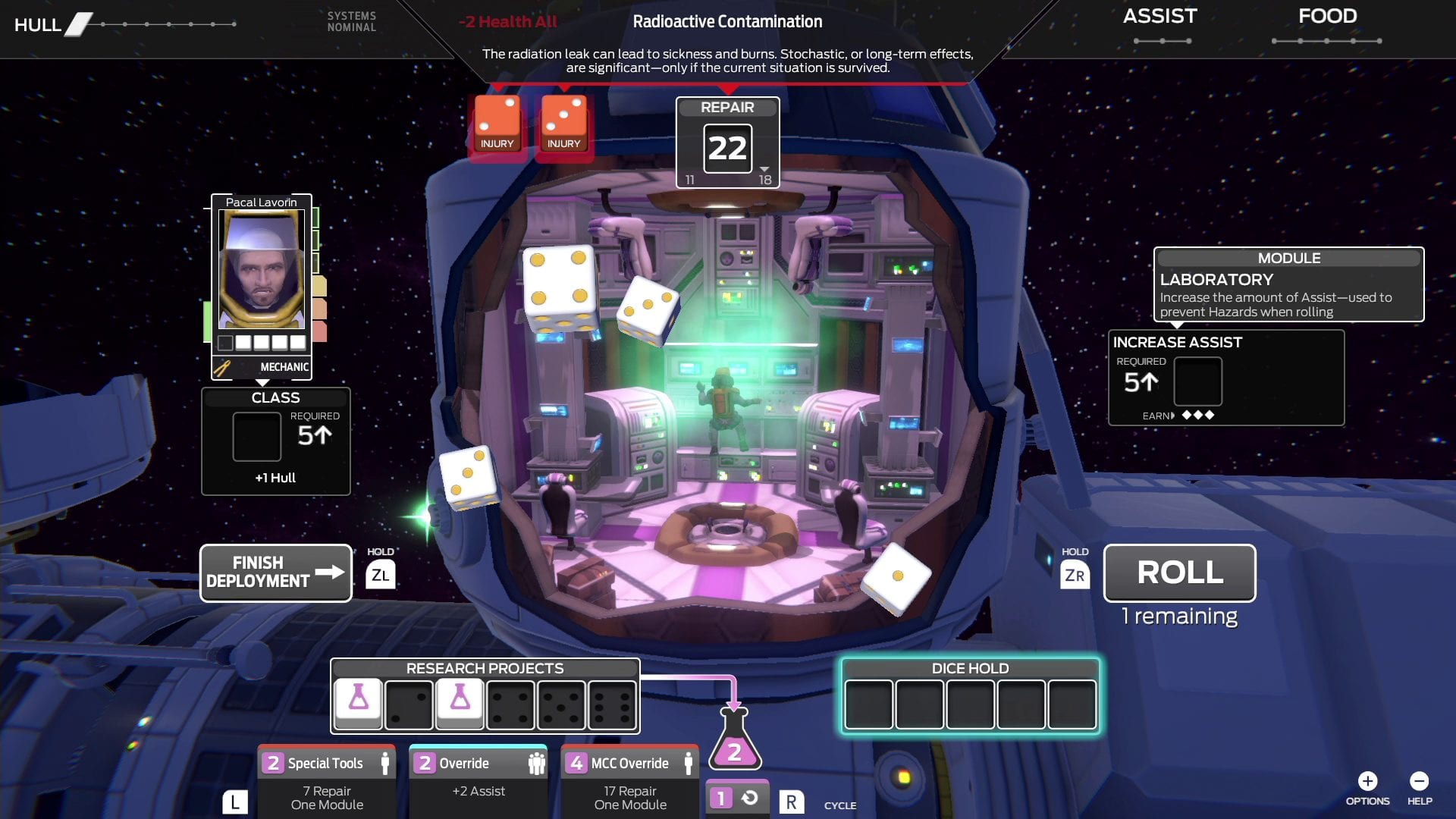 Crew members can have up to a maximum of five dice and three rolls per turn, requiring players to roll a total number in dice rolls to match or be above the damage number to prevent further damages to the spacecraft. After each roll, players can even hold dice aside they feel will benefit them and roll the remaining dice again to try get higher numbers. The dice can also be used for research, replenish the crew member’s health and harvest food which is important for future missions. The lower a crew member’s health is, the less dice they have to roll in their turn. The higher the dice rolls, the better chance there is for players to do all the above, but lower dice rolls will make these decisions incredibly difficult. It’s up to the individual players to decide which strategy they feel will work best and get the crew (or what’s left of them) safely to Mars.

If maintaining the spacecraft and keeping crew alive wasn’t hard enough, players will also have to monitor the stress levels of each crew member. Lowering their stress will help them maintain their composure and perform their tasks safely and efficiently. High stress levels can cause them to lose their sanity and possibly even harming themselves as well their fellow crew on board. Between each mission, players will be able to feed the crew to replenish their health and get more dice rolls, but only if there is food available. Another option for sustenance is called cannibalism, which is eating the remains of a deceased crew member who may have died in a previous mission. There aren’t actually any visuals in the game of human meat being eaten, which isn’t necessarily a bad thing. Seeing it in action would be very unsettling and could give the game a higher age rating. 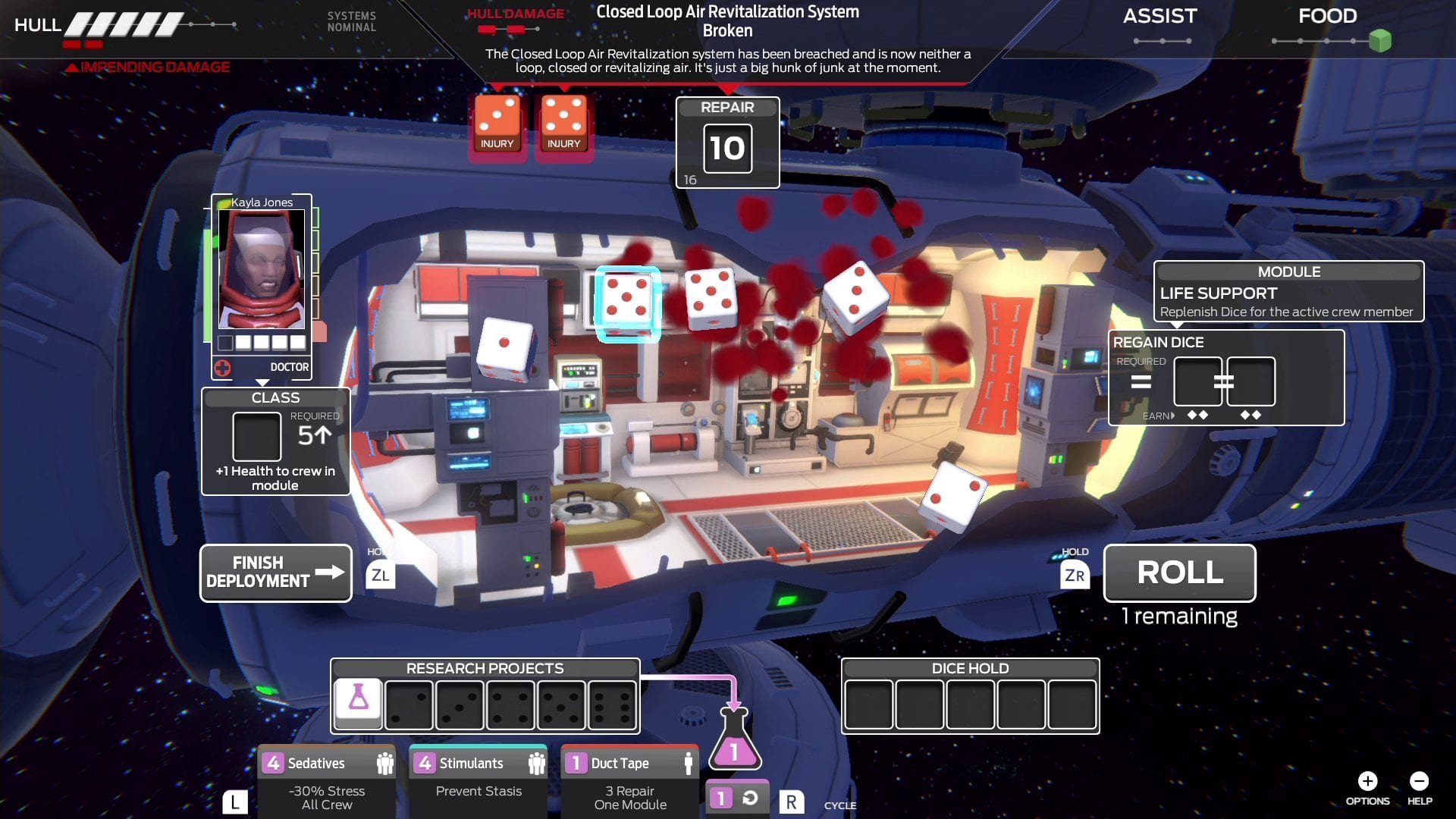 Resorting to consuming human flesh to replenish health will really raise the stress levels of the crew and bringing them back down to a sustainable mental stability will be quite a task. Crew members that have chosen Cannibalism to survive, will actually have bloody red dice that’ll leave blood drops on screen when rolled. This is a nice little touch that helps illustrate the desperate measures the crew have to use just to stay alive in outer space.

The game’s graphics does a good job detailing the spacecraft, its damages and the facial expressions of the crew. The crew’s faces may look outdated like a game from the early 2000’s, but their facial expressions really help represent their current mood depending on their condition and stress levels. The music during gameplay can go from upbeat techno to something deep and unsettling depending on what is happening which adds to the emotion of the game. Cutscenes will play between each mission with a narrator speaking about the current events along with very detailed artwork illustrating the scene. The stress levels of the crew can even affect the ending of the game.

The major downside to Tharsis is that success or failure of the game is very much left up to chance. Players will have to rely on pure luck to reach the end of the game. A space survival strategy game would feel better if players were given proper choices instead of relying heavily on dice rolls, which just doesn’t feel right. The idea for Tharsis is definitely an interesting concept and they are definitely onto something. A sequel to the game with the same concept, but provides more choices over dice rolls would be a game that could appeal to more players. Having said this, Tharsis can actually be an addictive game which gives it a lot of replayability. 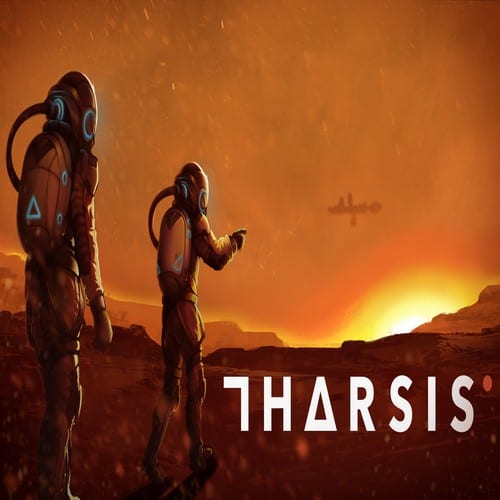 Succeeding in Tharsis requires you to make the best of what you have, even if it happens to be a pair of snake eyes. Certain factors may be outside of your control, but that doesn’t mean they can’t be overcome. Tharsis is not a game about facing the odds. It’s a game about changing them.