After its initial release 3 years prior, developer Aquria have listened their fans by re-releasing this classic game, under the guidance of the Unreal Engine 4. As such, the remaster presents newly upgraded visuals, a new playable protagonist and a bundle of both supporting cast and additional game endings!

A floating woman, wrapped in a white angelic-like attire, greets you asking for your gender and your name. Upon choosing and entering a name, the figure states her name is ‘μ’ and she will be taking you to ‘Mobius’, aiming for you to ‘forget all bad things’.

The opening cinematic reveals a Japanese style school, in which a graduation ceremony is being held. Various class members are called to the podium on stage, addressing the students on various topics. Eventually, your name gets called and you are given the option on which topic you’d like to talk to the students about (Welcome Students / Talk about the Future / Talk about the School).

Upon choosing an option, your character reacts with a gasp. Looking out at the sea of students, it appears that a few members of the graduating class are starting to glitch out, taking on different shapes and forms. What’s even more unsettling is that your character appears to be the only person noticing these strange occurrences taking place. Like any sane person, your character decides to get the hell out of there, post haste! As you exit into the city, the angelic figure of ‘μ’ is performing a musical act close-by, to the adoration of various citizens. Mid-performance, ‘μ’ notices you and flies to your position. As you try to flee for the nearby train station, ‘μ’ states that she ‘has only made the city so far’ and that she’s ‘not allowed to let anyone out’. What’s even more bizarre is that she states, out loud, why you would want to leave, considering she’s erased your memories?! What is going on?!

‘μ’ reveals that you are in city called Mobius, or Miyabi as the citizens refer to it. Just as ‘μ’ goes on to talk about the city, a golden sprite zooms into the scene. A virtuadoll named ‘Aria’ is revealed, immediately irate at ‘μ’. Aria demands ‘μ’ return to a place called the ‘Metaverse-es’ immediately. ‘μ’ declines, flying away from you both. Having just witnessed their singing sensation fly off into the sky, fans of ‘μ’s concert are furious at you, looking for a fight. Aria suggest you run, which given the fact that you have no idea where you are, why people’s faces are morphing and taking into account the number of angry fans wanting to fight you in broad day light, isn’t the worst thing to hear thus far.

As you turn around the corner, you bump into another student by the name of Shogo Satake. He states that he, too, can see the morphing faces. As Aria greets your new pal, nearby former concert go-ers spot you, suddenly sprouting robotic limbs / armour. Making me think,what kind of a city is this?! Aria chooses now as a good time to conduct an emotionally driven interview with you. But, with her bad timing notwithstanding, this is done as a method to unlock your hidden power. After answering some multiple choice questions, you return to the game to find that you can now summon your own robotic arms and guns to do battle! After completing a tutorial-esque battle, you come to find that Shogo is a member of a group known as the ‘Go-Home Club’, of which their members seek to escape this supposed virtual reality at any cost. Up against them is ‘μ’, who is revealed to be an AI of Mobius, and the ‘Ostinato Musicians’, capitalizing on ‘μ’s music, harnessing it to brainwash the users of Mobius, keeping them nullified to the actual reality surrounding them.
But that is just the tip of the Mobius iceberg… TCE: Overdose is essentially an RPG, which includes turn-based style combat. Think Final Fantasy style, but with an awesome difference.

Your main weapon is summoned, digital style guns, combined with a flurry of your punches and kicks. The main encountered enemies are known as ‘Digihead’, who are beings that’s have exposed dark mud, spurred by internal thoughts / emotions of pain, turning its host into a hostile, irregular formed creature). As you fight against these creatures, your character gains experience per the end of each fight, adding to their level. Upon levelling up, the character is rewarded with ‘skill points’, allowing you to pick and choose how to spend the newly acquired points.

As previously mentioned, the awesome difference in TCE: Overdose’s fighting schematics is that of an element known as ‘Imaginary Chain’. Imaginary Chain showcases a demonstration of your (+ allies, if applicable) attacks, plus your enemies’ attacks for a few seconds. At first glance, this element can seem a bit overwhelmed and a tad confusing, but after a few tries you’ll begin to wonder why other games haven’t thought of using this divine option earlier! You can pick and time your moves to your will, allowing you to time your attacks (or counters) precisely, gaining an opening or setting up for future damage via the ultimate move, ‘Overdose Skill’.

The battle system comes in 3 phases:

• Select Action:
Execute your choices with X button. Choose an additional skill (attack / spell) to perform a Chain Action.
• Chain Action:
Choose up to 3 actions to complete a chain. This can vary between attacks, Catharis effect and support.
• Imaginary Action:
Shows a demonstration of the anticipated outcome of both yours, your allies and your enemies attacks for a few seconds.

Your actions are broken down into the following categories:

• Action:
Special moves e.g. Emergency Barrier (a quick shield buff) & Dashing (quickly move to a targeted place on the battlefield)
• Catharis Effect:
Attacks that damage your enemies. This category also includes counters to your enemy’s attack, allowing you to follow up with either an Action or Support, thereby creating a Chain Action.
• Support:
Skills that provide buffs/debuffs to your allies/enemies respectively. The controls in TCE: Overdose follow that of similar RPG games. Thankfully, unlike other games in the RPG category, the third person camera does not react ultra-sensitively, nor does it get stuck behind in-game objects, allowing you to remain encased in the Mobius world, if you will. The game does a stellar job of walking through any additional control you may / will unlock throughout the story mode, keeping you relaxed and allowing you to fully embrace the in-coming changes, rather than flooding you with heavy text-based screens, which cause nothing but confusing overload. With the induction of Unreal Engine 4, TCE: Overdose, the game takes leaps and bounds from its predecessor on the PS Vita. With an increase in frame rate, beautifully detailed worlds and battles that suffer from no lag what-so-ever, the new engine was the blessing that TCE: Overdose sorely needed.

What’s even more impressive, is that the design and graphics of TCE: Overdose feel straight out of a Japanese anime, making it feel like you are indeed living inside of an animated world. Former games based on anime are sometimes hit and miss, either overdoing their animations or having their characters too overdrawn for comfort. The only downside to the newly presented imagery of characters and scenery, is that at times the in-game models don’t accurately represent either the dialogue or the scene playing out before them. Reacting somewhat deadpan to dire in-game scenarios, can may hinder your experience and momentarily take you out of the game and leave a bad taste in your mouth.

The sound design is above and beyond. With the soundtracks, there is tonnes of heavy competition in the RPG world, with various games in the series producing songs and moments that continue to live with us, many years after playing the game. The on-screen journey through various buildings and maps may seem elongated at time, but with the backing track of pure emotional and simplistic sounds that accurately represent where you are / what you’re going through, time flies by immensely fast.

With an amazing battle system, upgraded graphics and a plethora of new characters and story outcomes, TCE: Overdose provides a strong revitalization to this classic title. With an extensive story, various side missions and continuously being dropped with huge surprises along the way, TCE: Overdose is a must play game for RPG enthusiasts and anime lovers alike. 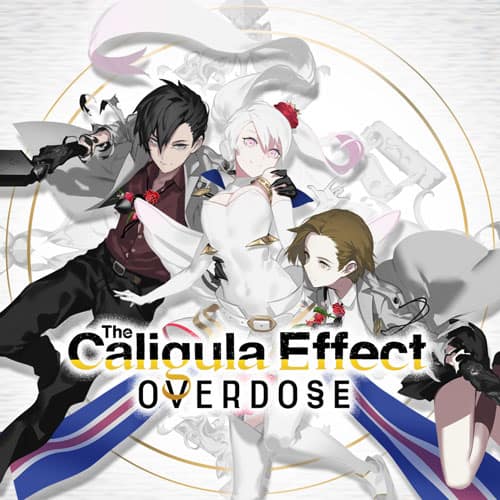 An idyllic world that exists for the sake of letting people forget about the pain and problems of reality. In this world created by a sentient vocal program, μ (Mu), reality and fantasy has become blurred, allowing people to relive their high school years in bliss. Yet in this seemingly beautiful and perfect world, something is amiss. Escape from this false paradise with your fellow students and return to reality in The Caligula Effect: Overdose!