The Church In The Darkness

The Church in the Darkness is set in the late 1970’s, with you taking on the role of Vic, an ex-law enforcement officer, whose nephew Alex has joined a religious cult run by Isaac and Rebecca Walker, leaders of ‘The Collective Justice Mission’. Labelled as radicals by the US government, they relocate to South America, where they set up a utopia in the jungle called Freedom Town. Vic and the rest of the families left behind are worried about those who’ve run off with this cult and fearing for the safety of his own kin, Alex, Vic must infiltrate this town and uncover what truly is going on, before it’s too late.

‘The Church in the Darkness’ by Paranoid Productions, has a story where the motives, beliefs and actions of the preachers change every time you play, based on the way you play and the choices you make. This has an effect on the outcome and changes the story as the game offers multiple endings. You’re given the option of gender and skin tone to customize who Vic is but it doesn’t really define the character though, as the dialogue is very gender neutral. The game style is a top down, shooter/survival and it strongly reminds me of Far Cry more specifically 5, which even though was based on a cult and was a shoot and loot, the sneaking and hacking all certainly felt like Far Cry which I wasn’t expecting. If you ever wanted a top down version, here is the game for you to go to.

You start of with a choice, the choice of either a med kit or a pistol, but every time you ‘EXIT” the game whether it be from death or by just finishing a play session, some of the items you collect throughout are unlocked. There are 10 items in total that you can unlock and select as your main one item for your next play through.

Having these choices really keeps the game fresh. If you feel you’ve stuffed up and don’t like your story’s direction the deeper you get in, just end it and start fresh. The freedom to play with an attack head on aggressive first approach or as stealthy as possible next is a really interesting concept. Don’t like it, just stop and restart gameplay and create a new path, so simple and effective.

The controls match most top down shooters in comparison, with the targeting/aiming moving really fast. There is no setting to adjust the speed but they have a targeting lock on that attaches to the enemy which helps balance it out. Sneaking, depending on difficulty, allows you to see where your enemies are looking which is helpful for low level players. The atmosphere is maintained by wildlife sounds to make the jungle feel alive with bugs, birds and other creatures tweeting and creaking. The cults have dialogue running over speakers and alarm towers across the map which promotes how much control and reach they have through Freedom Town. There is a basic music track that comes and goes from time to time just to add to the overall feel.

The overall look, now this is interesting, as it feels like they were being a bit short handed and budget because you barely see the characters and environment close up. The detail is minimum, all of which are somewhat flat colours and tones, feeling almost like something you’d expect from a PS2 game. It is very odd but it works really well.

Overall, the deeper you get into ‘The Church in the Darkness’ the more confusing it gets. It keeps pulling you in with no real direction to what needs to be done except to just find Alex with any means necessary.

The Church In The Darkness 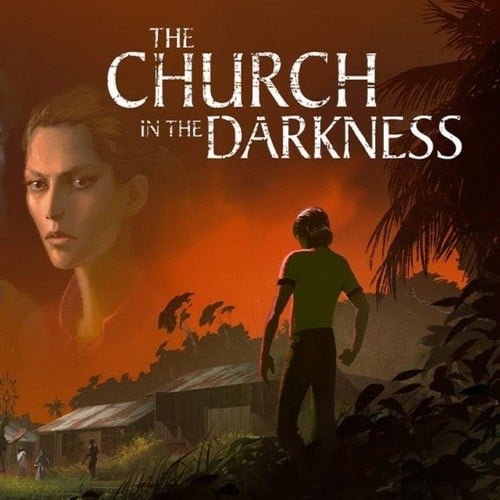 The year is 1977. Your nephew Alex has joined a religious cult and moved with them to the South American jungle. It's up to you to sneak into the commune, find out what's really going on, and decide if you need to get Alex out.