We’ve all experienced it before. A horrible feeling where you’re on your own and time seems to just drag on. Friends are busy with work or other priorities and we feel alone, a longing for company. If we can manage to keep ourselves occupied, we seem to not notice the lonely feelings and before we know it, it’s the end of the day and we’re off to bed. The Longing, now available through Steam for PC, sums this up nicely.

Studio Seufz have developed this tasty little title that perfectly demonstrates how keeping yourself occupied can affect the way we perceive time and the effects of being alone. Playing as a Shade, a last ditch creation by the King of a once spectacular underground world, you are tasked with one simple quest; to awaken the King after he sleeps for four hundred days. Published by Application Systems Heidelberg, The Longing plays in real time, giving you the option to do as much, or as little as you want.

As the Shade, you’ll be able to explore the great caverns, collecting books to read or gems to decorate the simple nook allocated to you as a room. This labyrinth of caverns hides all manner of collectible items, including simple mining tools, mushrooms and pieces of musical instruments, all designed to keep the Shade occupied as it waits out the four hundred days the King will sleep for. Expanding and decorating your little cave will help it feel more homely, further influencing the passage of time. 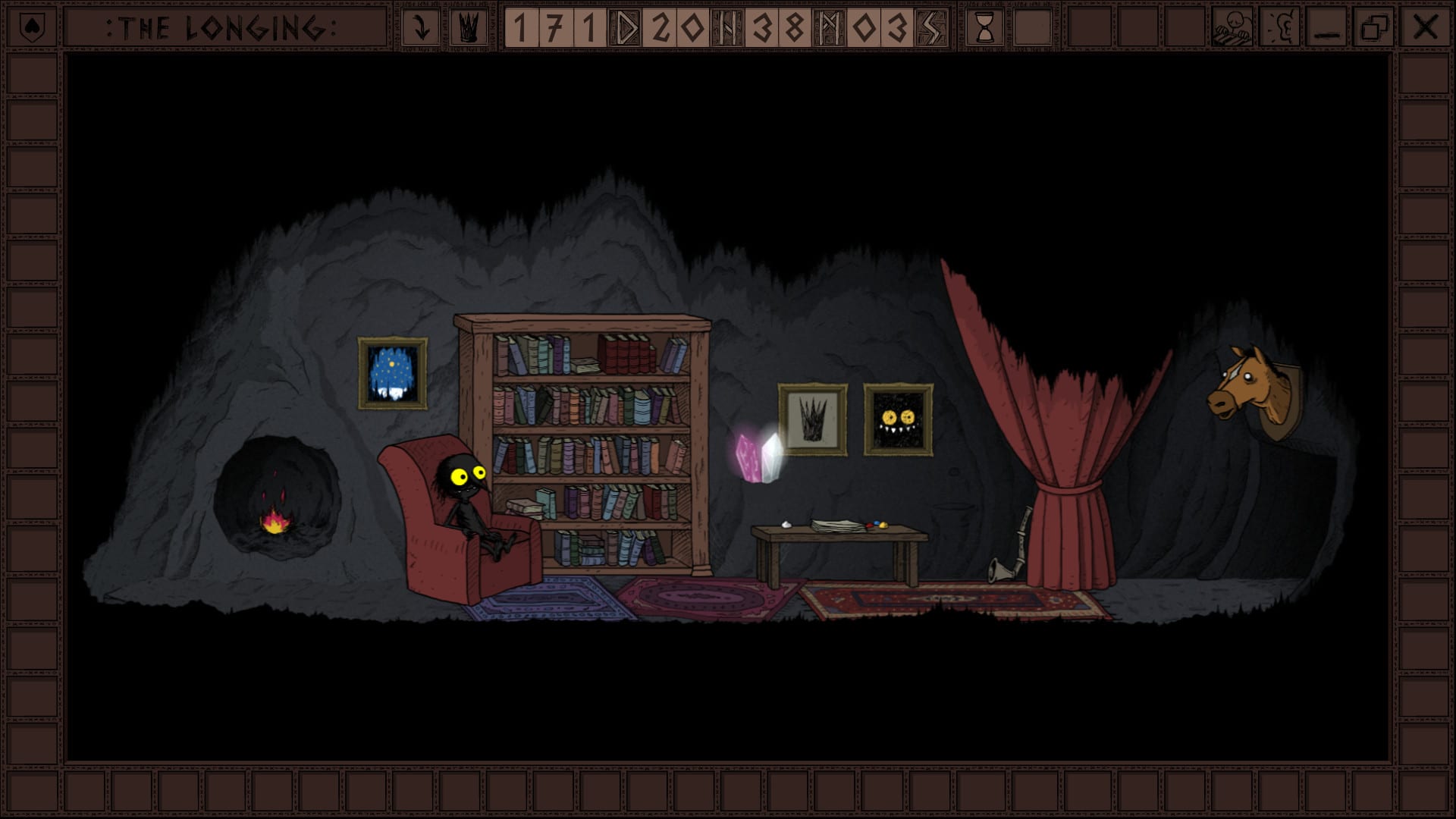 The Longing sports a very simplistic graphics set up, vaguely reminding me of the animated version of Lord of the Rings which was released back in 1978. The hand-drawn backdrops and simple animations lend themselves entirely to the style of game, enhancing the feelings of loneliness that the Shade is suffering. A minimalistic colour palette emphasises the few brighter colours you’ll find dotted throughout the caverns, cleverly drawing your attention and helping you appreciate the simple things in life.

There is very little in terms of audio, as befits a game based on being alone.You’ll have the rhythmic tapping of your feet as you walk through the empty caverns, the occasional rustle as unseen vermin scurry about, or the King’s breathing as he slumbers. Very occasionally you’ll hear a monotonous drone of something that vaguely resembles music, but unless you have collected the pieces of a musical instrument, you’ll be alone in near complete silence, really pushing the fact that there are no other characters within the game.

The Longing is a very simple game to pick up and play, as all you will really need to do is point and click with your mouse. All actions, including walking, picking up items, or clambering on rocks to make your way around are done with a simple click. Brief prompts will pop up as you move about the world, letting you know there is something you can interact with, and depending on the type of object, this could potentially take real-time hours to complete. One particular door took in excess of 2 hours to open, a particularly daunting task when it comes to real-world time. 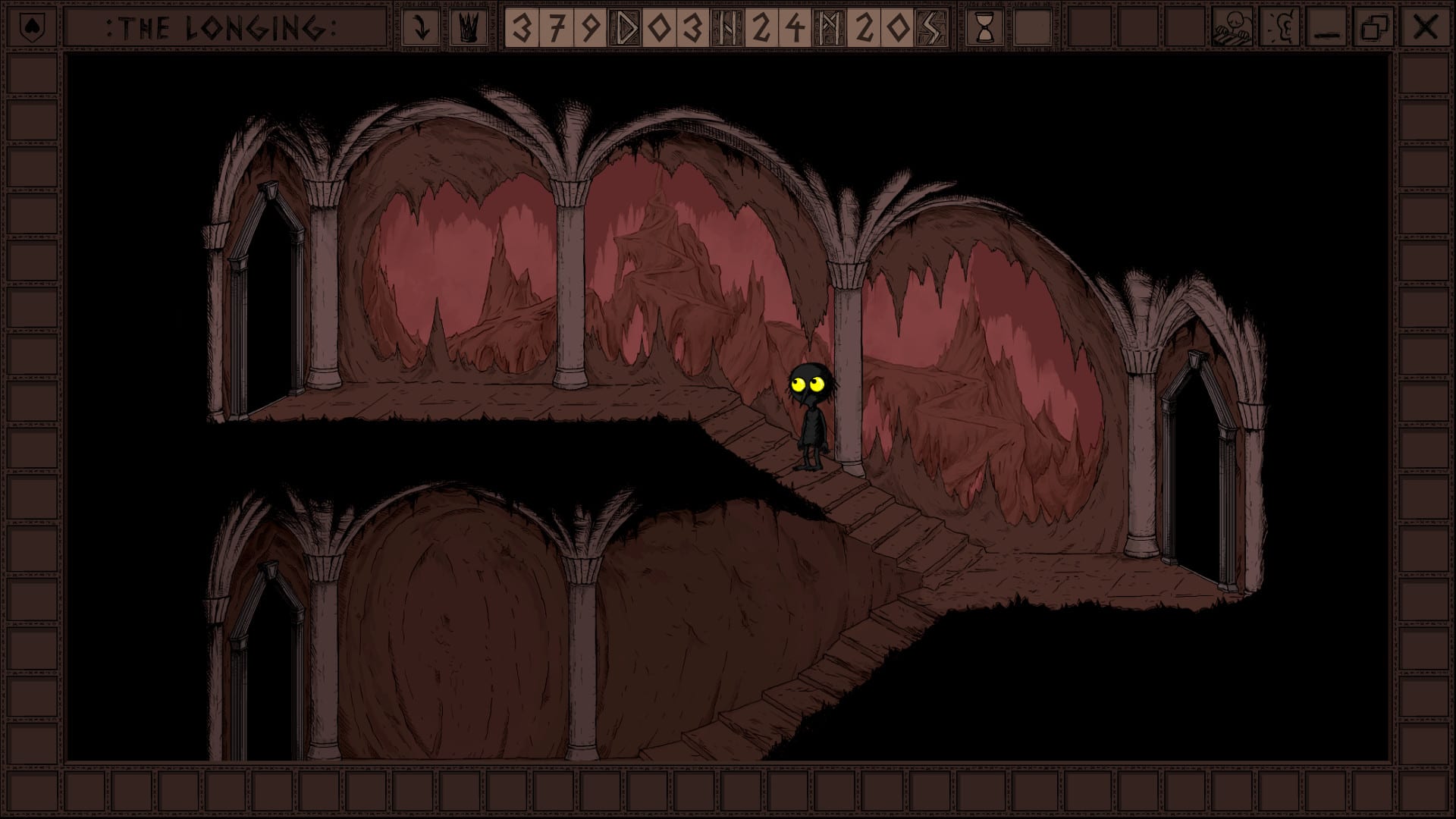 One mechanic I did find particularly interesting, aside from the previously described ability to speed up time by keeping active, is the fact that The Longing will continue to count down even after you’ve closed the game. For all intents and purposes, you could start your game, wait out the real time four hundred days, and then return to awaken the King. I don’t feel like this would be a particularly pleasant experience for our little character, as he seems to work in a way similar virtual pet, thriving on your interactions, or feeling lost when you’re not around. Fortunately, he doesn’t need to eat, sleep or wash up, otherwise we would all be horrible parents.

The Longing is a beautiful game in it’s simplicity. While it lacks the exciting aspects of many other adventure games, and it might have you wondering “what’s the point?”, you feel like you’ve accomplished something when you see the countdown timer at the top of the screen move faster than normal. The Longing has a way of showing that we are in control of our lives; that what might seem to be a meaningless task can be just as rewarding as something we take for granted. Keeping ourselves busy will help us deal with the feelings of helplessness. I know I have felt this way on a number of occasions, and The Longing only proves that no matter how meanial something seems, it can truly affect our perception of life. 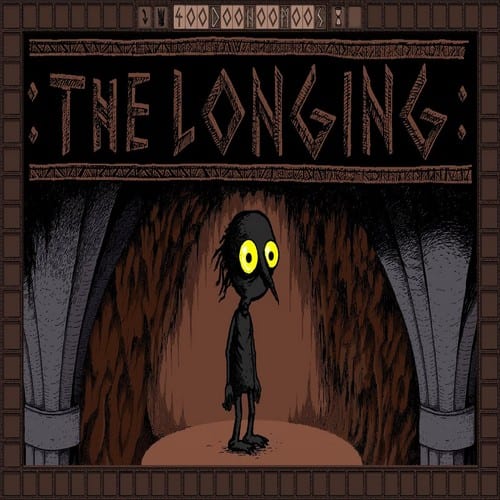 An unusual mix of adventure and idle game. In utter loneliness deep below the surface, it's your task to wait for the awakening of your king... for 400 days.