Everybody was kung-fu fighting……
Okay, now thats out of my system. I can move on with my review. The Messenger launched first on the Playstation 4, and is later coming to Windows & Nintendo Switch. This is a fun side scroller that’s a tale of a ninja.

So here you are, you’re a ninja! You’re no Chris Farley, you’re the real deal! But one day a village that houses many ninjas is attacked by an evil king, a scroll is passed onto you by a member of the village who then appoints you as “The Messenger” It’s your mission to deliver that very scroll to where it belongs.

Come with me now on a journey through time and space, to a retro world where a ninja known as “ The Messenger” kicks some ass! This is a typical side scrolling adventure game, you’ll play as a ninja who possess the skills to kill anyone in front of him with his mighty sword. You’ll jump, run and climb walls across all levels. Levels are mostly different, some outside and others indoors and underground. Some levels even have moments where going underwater is either optional or mandatory.

As you play through each level you’ll defeat enemies with your sword from little bats, skeletons, turtle men creatures to dog like creatures that shoot fireballs. There are more but I’m keeping this nice and sweet. You can die from all those but also get squished by moving sections of the walls and floor or even spikes that can impale you, so watch out for those elements. Although a lot can kill you, thankfully every so often a save point doorway is seen, just walk past it and you’ll see top of the screen say “saving”. After playing through each level you’ll meet a boss, and you’ll need to defeat them. It’s much easier than you’d think but if you find yourself unable to take down any of the bosses down just pay attention to their pattern which never changes. It’s rather an easy game to play, but even I died from time to time, a green bottle item can be seen and walking over it will pick it up and add to your health bars if you aren’t already completely full.

Upgrades can be purchased in game. Time shards can be collected and picked up from dead enemies and hitting lamps with your sword. The special collectables you can go around hunting for are green medallions. If you collect all 45 of them you’ll unlock something special.

There are really two parts of the game. “The past” represented in 8 bit graphics and the future which is shown in 16 bit graphics. The game does change later on, but that can be left as a surprise. This is a colourful game, that is a stand out. As for the audio, like the visuals, you’ll head towards an old school retro music direction.

I’m a lover of most game genres, but I do love my side scrollers. The Messenger doesn’t look like much from the images on the store, but having played it I thought that this game could sell loads of copies. It branches out to us oldies, retro hipsters as well as someone looking for a fun, side scroller. 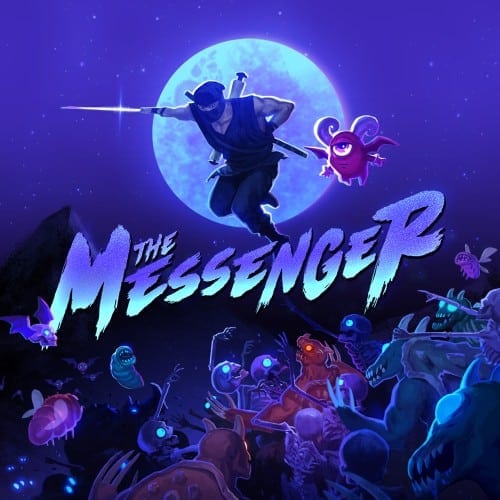 As a demon army besieges his village, a young ninja ventures through a cursed world, to deliver a scroll paramount to his clan’s survival. What begins as a classic action platformer soon unravels into an expansive time-traveling adventure full of thrills, surprises, and humor.