I have never really played any TellTale style games. I think I gave one a shot, but I didn’t enjoy it, so much so, that I don’t even recall the name of it. To me they always felt slow and one directional.

I know this isn’t always the case, but I’m the kind of person who will avoid a complete genre based on a single experience. Being a game reviewer however, this isn’t something you can just decide to avoid and it’s all in a day’s work, you have a job to do. Enter The Padre.

Developed by Shotgun with Glitters and produced by Feardemic, The Padre promises to deliver a retro-style, horror game punctuated by quick witted, pop culture referencing humour, and deliver it does. Playing as Padre Alexander, you’ll embark on a holy mission to find your former mentor, Cardinal Benedictus, and bring him back to the Church. According to a letter that someone slides under your door, only you have the specific set of skills required for this job. The perks of being a part time Demon Hunter, I suppose. Leaving your convent, you’ll make your way to his last known location in Mississippi – a very creepy, abandoned mansion. Pulling from its retro roots, The Padre sports a surprisingly well detailed, 8- bit environment. Featuring a similar artistic style to Minecraft, worlds are beautifully created with exceptionally detailed blocks, expertly placed together to create suitably creepy environments. Delightfully grim lighting and eerie flame effects help push the demonic influences on the mansion, giving a wonderful sense of old school horror. Even the characters, as basic as they may be, are easily recognizable for what they are. The first encounter was quite obviously a zombie, even if it is wearing an old ball gown. Another was quite obviously a dark reflection of your character, offering up the question of what agreements did you make to get where you are now?

Gameplay for me was a little lackluster. As mentioned before, it follows a similar play style to the likes of Life is Strange. From a single camera angle, you’ll move your character around the immediate area, searching out clues and solving puzzles as you go about, interacting with items of interest by pressing whatever button just so happens to pop onto the screen. I did find it a little difficult to manoeuvre through doors while playing, as the character himself moves fairly quickly about the play area and quite often I would end up too close to the door, leading to the action button not popping up. Now given I have never really played any Telltale type games, only watched it being streamed, I can’t say I’ve seen much in the way of “real time” action. The Padre gives you the opportunity to lay the smack down on your enemies in real time. You’ll be able to wail away with a crowbar, hack them to pieces with a chainsaw, or shoot them from a distance with your prized pistol. The style of combat on offer did lead to an amusing, if slightly, frustrating experience, as multiple enemies would leave me feeling very overwhelmed.

Firing a weapon was not much easier and often gave opponents time to close on me, as aiming a gun when the camera is in the opposite corner of the room was not particularly easy. A red directional cone would appear, giving you a sense of direction, before a small “loading” bar would appear above the target’s head. Perfectly timing your shot will lead to more damage, but it also gives the enemy ample time to reach you. I was pleasantly surprised by the sounds in game, completely expecting to read walls of text while over simplified sounds played in the background, but this is not the case. Padre himself sports a genuinely gruff voice, given what he has seen and experienced in his time and has plenty of dialogue on offer. Creepy music plays softly in the background, while ambient noises set the tone for what is a very spooky environment. While not following the retro theme the rest of the game has on offer, it certainly didn’t take away from the experience – If anything, it helped create a more sinister theme and really helped to draw me in further.

From real time combat to puzzle solving, a rich and compelling story to a retro feel, The Padre is a very well put together game, offering something for everyone. The old-style horror is enough to have you wondering what will happen next, but it isn’t so scary that people who dislike the genre will avoid it. Even Stacie said she was interested in this one, and that’s saying something!
The Padre is definitely worth looking at. 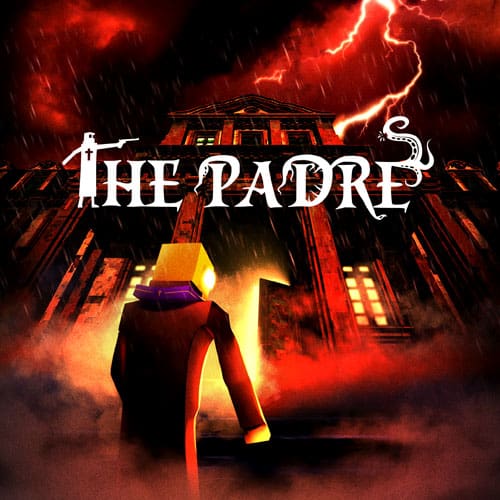 Published by: Feardemic
Developed by: Shotgun With Glitters

The Padre is a retro stylised 3D horror adventure game tapping deep into the roots of classic horror games.