By Mathew Lindner on October 19, 2020 on Reviews, 8 More
Tweet
No Comments

Imagine being stranded on an island, washed up on a beach with nothing but the shirt on your back. Do you think you could survive? With the steadily increasing list of survival games, I think most people feel like they’d have some idea. I mean, you can simply punch a tree to get some wood, put a few pieces together and the wooden pick axe will allow you to mine stone, right? If only it were really that simple.

Brought to us by Team17 and Sold-Out Software, the same team who The Escapists, The Survivalist is another resource gathering survival game that leaves players washed up on the shores of a seemingly deserted island. Players will need to gather the islands natural resources, collect food and train monkeys to build up their home base before venturing out into the wild, exploring beautiful biomes and discovering the islands secrets.

Much like many other survival games, players will need to focus on gathering resources and making sure their character doesn’t starve to death. Players will have access to a very basic set of recipes that will help them get started, with more opening up as players build up their base. The recipe tree initially looks really easy to open up, but this quickly fades away as you start to need more exotic materials such as metal, which is not the easiest thing to find in your immediate vicinity. 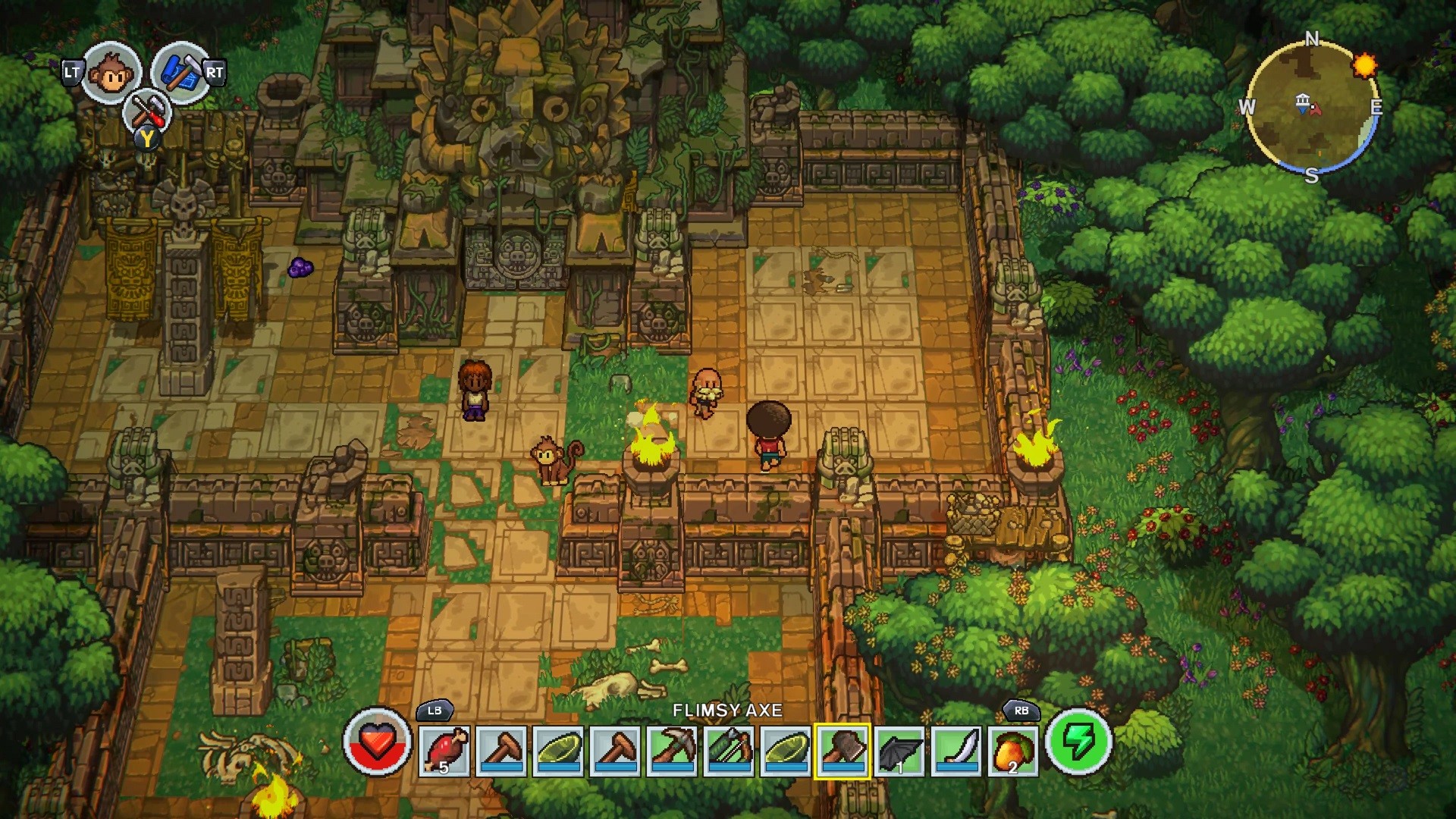 As you explore the world, you’ll come across monkeys that you can befriend, which then allows you to equip them with tools and teach them to perform the more mundane tasks such as mining or building. In saying that, the player will still need to collect the resources, as well as loading up the materials for whatever recipe you want them to build. For a lot of the smaller jobs, such as turning a piece of wood into a handle, the player is better off doing these themselves, but for larger tasks, such as building the forge, using your army of monkeys will allow you to continue exploring.

Using the same pixel-art as The Escapists, The Survivalist is actually quite beautiful to look at. The different biomes are impressively detailed and the buildings dotted around the island are spectacular in their simplistic styles. Playing from a perspective similar to that of the original Pokémon games however can be a little difficult. There were times I had mined resources, but I wasn’t able to easily locate them as they had fallen to the ground behind a rock facing, so it was more of a case of “Mash the buttons until I pick everything up.” While I can appreciate the old school RPG style of play, I feel with the type of game this is, it really could benefit from being able to partially rotate the camera in certain areas.

The in game music is very tropical in its sound, which given it is also in tune with the pixel art style of the game is quite the feat. The sound effects used on the other hand are much more modern in how they sound, with your footsteps changing dependant on the surface you’re on, or the ocean’s waves splashing about on the shore line. There are other aspects that are more in line with the 16-bit style of the game, with power up noises similar to what we heard back in the days of Sega Megadrives and SNES consoles. It’s quite the pleasant mix, and as odd as it may feel, the different sound effects and music all tie together really well and work hand in hand with the game style. 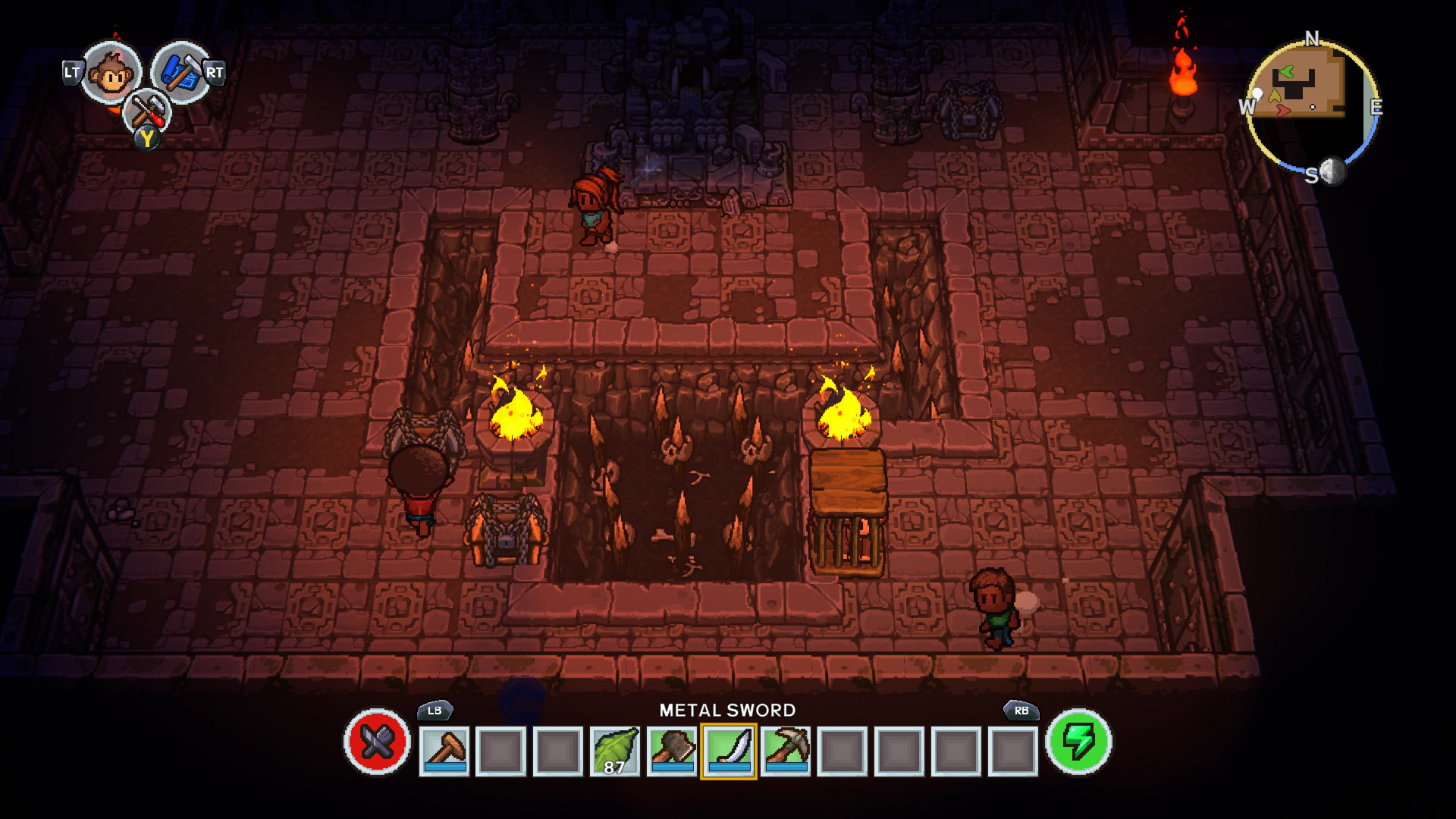 While players can tame monkeys and teach them to perform basic tasks, this style of game is much more suited to multiplayer, and this is where I feel this style of game really comes into its own. In my experience, working with a team of friends is much more enjoyable than constantly ordering the monkeys to do the job for you. When you first try and create or join an online game, it does appear that there are a couple of different game types available, but this really isn’t the case. Modes like Building and Treasure Hunting are basically just there to let you, or people who may be joining your game know what the host is wanting to focus on. Once you’re in a game, you can really do whatever you want. You’re not really bound to any one action.

With its Pegi 7 rating, it is clearly aimed at younger people. The Survivalists is a bit of fun, but it didn’t keep my attention for too long as it did feel very young. It doesn’t take much to keep your character from starving to death, with fruits being readily available allowing you to make a simple smoothie that almost replenishes your health. The addition of monkeys that will mimic your actions is a pretty cool concept, especially for younger players who aren’t really able to play online, and the fact that there are multiple islands and an abundance of procedurally generated biomes will mean that no two games will feel the same.

I didn’t play The Escapists, but if The Survivalists is anything to go by, I think Team17 and Sold-Out Software are onto something with their games designs, moving towards an age group which is often overlooked by developers, though I know the nostalgic RPG feel will probably draw in some older players as well. 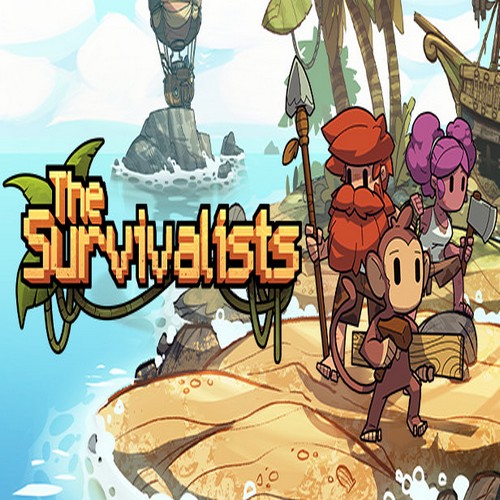 A living world full of surprises, secrets and danger awaits in The Survivalists, an adventure-filled survival sandbox set in The Escapists universe. Explore, build, craft and even train monkeys with up to three friends in a desperate bid to survive. Have you got what it takes to be a Survivalist?