As a kid growing up, I used to love diving in the sea or a swimming pool and having that weightlessness slowed down sensation that you feel whilst being underwater. How time seemingly slows down, all your actions are intensified and any underwater play fights are genuinely like you’re forever stuck in slow motion.

The team at Moonray Studios seeks to make that underwater combat ideology their entire focus of their game. Yes, there may very well be other underwater games out, but Tidal Shock does something that no other game has done yet: a full-blown underwater shooter!

Being that this game is currently in Early Access, there’s no direct ‘story mode’. You have a choice of male or female character then you lobby up and await a game. Upon the game start, one of the most intriguing features of Tidal Shock is that you start off riding a torpedo. Ironically, it’s very much a sink or swim item. For example, if you choose to keep the torpedo upon game start, you gain a speed boost. However, you also run the risk of the torpedo spontaneously exploding and damaging your health if you get shot or decide to slam head first into the ocean wall. 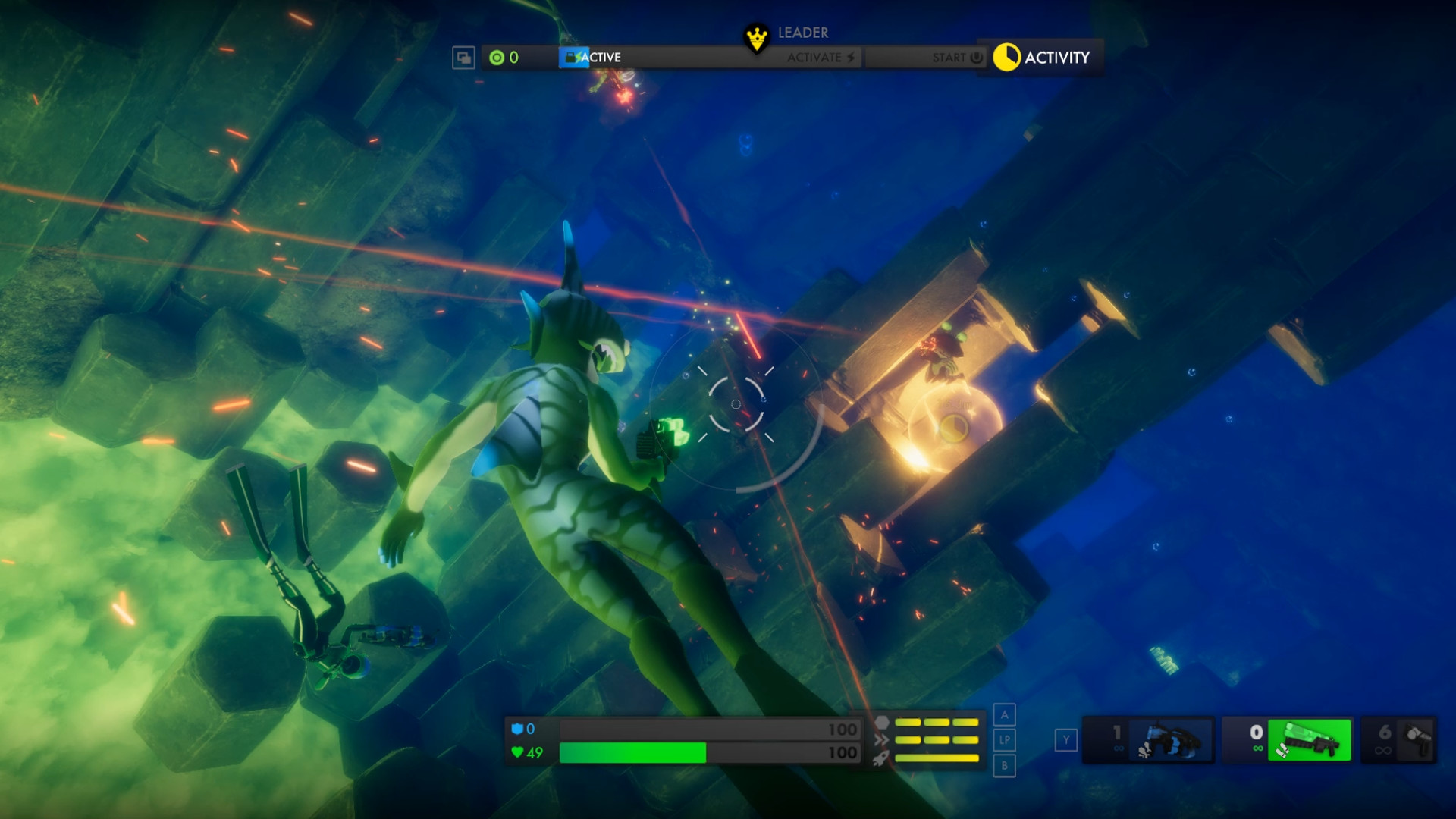 Tidal Shock combat has a similar feel to that of Fortnite. It’s a high intense, colourful action that’s very much fast and in your face. Instead of blueprints and building options ala Fortnite, you are given a deployable shield that allows you to block certain weapons as you slowly advance towards or escape the field of battle. At the moment, there’s a fair number of variable weapons available to blast your way into action. However, its action isn’t enough to carry it into diversity. It still feels like a generic shooter that is seemingly flooding the market right now. One can only wish that further updates will allow this game to stand on its own, and that the underwater element will play a much heavier role, rather than just a quick torpedo ride / ‘swimming instead of running’ style game.

Tidal Wave’s colour scheme is absolutely fantastic. It’s got an 80s synthwave / bright neon colour vibe to it that really is visually so captivating and engaging to swim around in. The playable characters, guns, bullet streams / explosions carry a very animated, cartoon vibe (again, much like Fortnite) that allow it to be comical and incredibly fun. The sound effects also carry a high energy, cartoonish style sound to them, which complements the visuals perfectly.

The background audio I experienced in-game was a very funky hybrid of Hawaiian style beats with a bass/guitar rift paying homage to 007 James Bond of the 60’s era.

If you’re a fan of the current shooters on the market, and are looking to experience a new style, then definitely check out Tidal Wave with its fast paced, gun them down style! An underwater arena shooter with a shocking twist. 8 players battle in a classic respawn arena to capture the reactor and boil the competition!