In the middle of the 2020 pandemic, Urnique Studio managed to debut a quaint little puzzle game called Timelie on Steam. This same little game has now made its way onto Nintendo Switch and I couldn’t express anymore how much of a perfect fit this is. A little girl and her cat, lost in a Realm of Nowhere, with little more than each other and the power of time at their fingertips. Chilling stuff and a great premise for a stealth puzzle adventure.

There are only so many ways you can reinvent the wheel when it comes to puzzle making, and Timelie has hatched a clever little design. Each room layout tasks the player with getting from one side to the other. Seems simple enough, but then you must throw in the killer robots that are quick to get in your way, complete with a cone of vision in front of them to indicate their line of sight. I would have liked to see a bit more variation in design and movement, but I suppose keeping a consistent measure was important to the game structure.

To navigate the room, there are a series of dots lining the floor. Think of them as a set of grids so you can space out your movements one step at a time. Using this template is very important because you need to time your movements to the letter. A direct path isn’t always the best decision and a few extra steps can help you circumvent a roaming guard who will also be following the same movement rules as you. 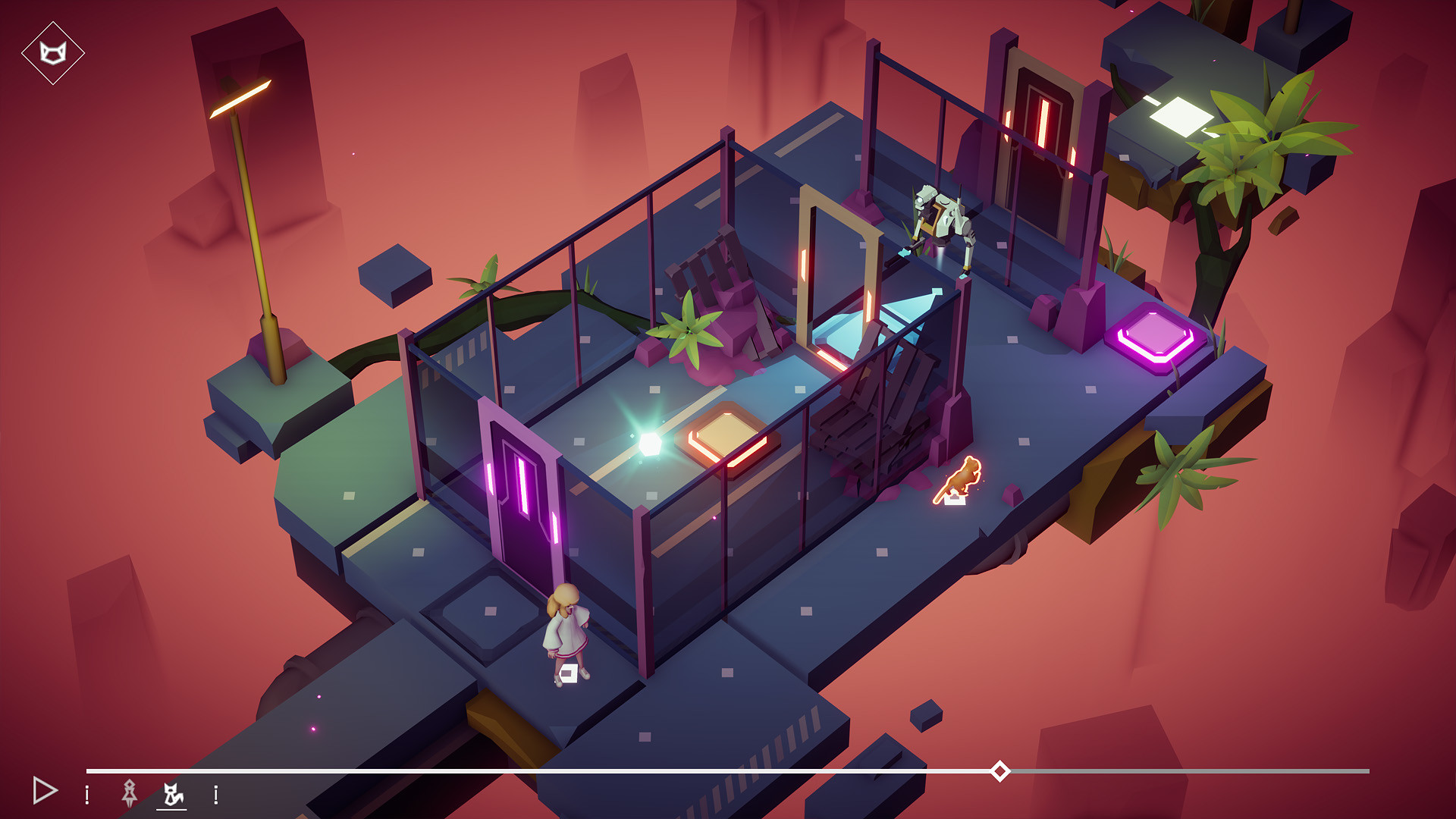 The third-person camera work allows you to inspect the entire location, and with the Nintendo Switch edition, you can pan the screen around and select the location you want to walk to with the touch screen in handheld mode. I know it may sound gimmicky, but it was by far my favourite feature of the game. I would still have to use ‘Y’ to interact with items or hold the ‘ZL’ to use my powers, but the controls were overall very light on and allowed me to pace myself without having to juggle 8 buttons at once. The other feature which gives this game its own personality is the time control options. You only have a set amount of time per level, but you can use that time to fast forward and watch the movements of the guards in the room. Once you are confident or have a plan then you can rewind to the start and see if your plan is viable.

Pretty early on you meet up with a cat, which was awesome by the way. You can alternate between the two characters and use the cat to distract the guards for you to slip by. Each level slowly increased the complexity and I even had to start planning the paths of the Girl and her cat at the same time, before letting them play out in real-time to complete the later levels. You will have a limited set of powers that will expand the more you explore, and you can isolate sections of the levels to rebuild broken bridges or manipulate the paths in your favour.

The team at Urnique Studio has even thought ahead about failure and made the game automatically rewind time if you fail or walk into the eyesight of a guard. Quick resets kept me from frustratingly having to restart an entire level that other games in the genre run into. A neat little optional feature is also available once you have successfully figured out the course, you can watch a successful run without all the stoppages and failures. 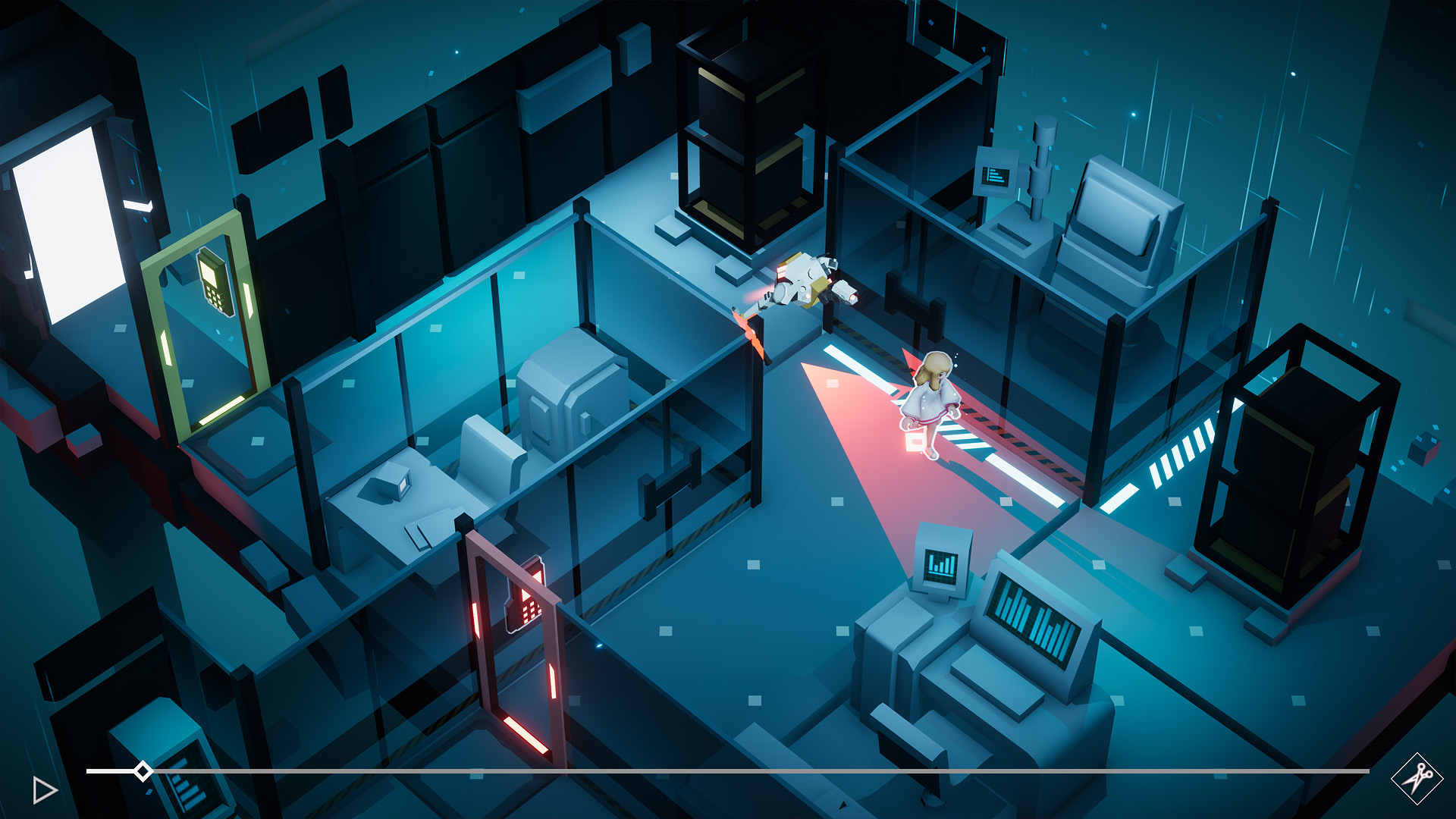 With such innocent cover art picturing a girl with flowing blonde hair and a white gown, I got a much creepier and mysterious vibe from Timelie when I started to play. I wouldn’t say it was on the same level as say, Limbo, and I don’t believe they were aiming for that either, however, the minimalist design in the environments floating in the abyss was a pleasing combination. The bottomless void below the platforms emitted a cool blue glow and the puzzle pieces pierced the darkness with colour-coded neon lights.

It was a very well-thought-out design, and they needed to be able to convey these feelings from the environments while pairing with Lo-Fi and ominous music, as that is where you will find most of your sense of fulfilment. There isn’t exactly a narrative to follow outside of that, but I was still invested in finishing the puzzles and was intrigued by the voiceless protagonist all the same.

Spanning 5 chapters with options to return for greater rewards for flawless runs of the rooms, this neat little package can offer a few hours of satisfying gameplay. With the Hell Loop DLC in the works, this Nintendo Switch edition has found a good home, and its abstract design fits right in with other Nintendo exclusives. 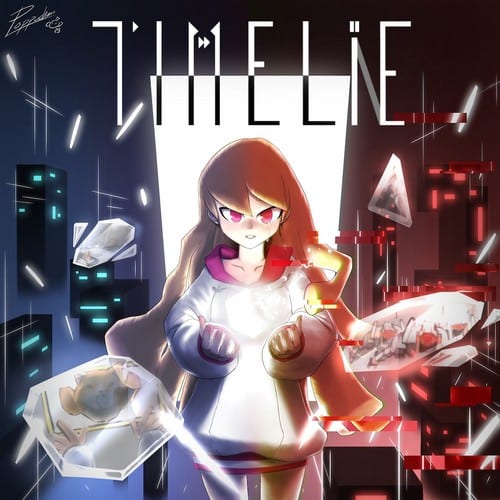 Control time like a media player and work with a mysterious cat as you solve puzzles and uncover the secrets of a strange, surreal world. Sneak, solve, and escape…together.