By StacefaceMayhem on May 12, 2019 on Reviews, 8 More
Tweet
No Comments

Quirky games. Yeah, I have time for them. Its hard to reinvent the wheel and indie companies try all sorts of ideas to make their game stand out. Now this had me curious… what possibly could be the connection between a bartending simulator and a cyberpunk dystopia?

Released initially back in 2016 on PC, VA-11 Hall-A: Cyberpunk Bartender Action by Sukeban Games has finally made its way to the Nintendo Switch. Essentially an indie novella with a bartending mini game thrown in, this is one title you certainly need to have an open mind playing.

Enter the character Jill. As Jill, you must work your ass off in a bar known as Vallhalla, infamously dirty, smelly and an all-round dump located in a cyberpunk paradise of a city called Glitch City. In a culture where humans are spliced with nano-machines, Jill is struggling to pay rent and if customers don’t start coming in and buying her boss’s overpriced drinks, you will lose your apartment. Using your charismatic skills of conversation and proficient ability to mix drinks, you must lure as many people as you can back to this potential up and coming, social hot spot, so you can earn a wage and live a life of luxury… finally. As I mentioned before despite this being a bartending game, the focus is more on the conversations you have with customers. The more they like you, the more they like the bar, the more they like the bar, the more they spend on drinks. When a client asks for a drink, you are then thrusted into a mini game where you mix ingredients with the flair of your shaker. Most are simple but some may require things such as on the rocks, aged, double strength or a certain blend style. Mixing drinks is the only real interactive part of this game, and it is very easy to master from the get-go.
The conversations are what fuels the story.

With its neon, futuristic aesthetics, each character has a somewhat social commentary on the conflicts that Glitch City is facing. The only control you have on this ability to make them divulge information is how drunk you make a costumer, or whether they like you enough from the correct order you made for them. The fact you don’t have the option to pick conversation prompts is the game’s biggest downfall. The conversations are too linear, giving you the feel, you have lost all control of the direction of the narrative. I just wish they had added just a few more things that were interactive to engage the player. The narrative is interesting though. Touching on issues such from the media controlling the information we view in everyday life, to governing bodies using force to keep society into line, it all seems like a distant future not far from our current own. I did enjoy reflecting on these fleeting moments of realness, but then was often pulled away by the cringe-worthy sexual talk of the prostitute-like android that would enter the bar ever so often. Its fine to have content about sex, drugs and rock’n’roll ,hell I’m all for it, but this seemed a random stab at being edgy that just fell way too wayside, especially when you may have previously just spoken to someone about the hardships of maintaining a social pecking order, not 5 seconds before.

The pixel art is to die for, well for someone that enjoys the classic look visually like me. The colours are a bright, neon dream set amongst the dark, gritty undertones of the bar. The characters are actually really interesting to look at too and match with their character arcs, definitely a highlight of the experience. This all fits in very well with the space-aged, vaporwave music, that you can cleverly pick yourself via a menu that gives you access to the jukebox that plays in the Vallhalla. The ambiance of it all really did want me reaching for a smoke and a frothy beer myself.

Overall, while VA-11 Hall-A: Cyberpunk Bartender Action isn’t an amazing game, it surprising had me interested for a lengthy time. The visuals are stunning and the music have been used in a fabulous way to set the atmosphere of the time and space. While not a game many will enjoy, the tales and experiences of the characters are certainly something worth listening too. 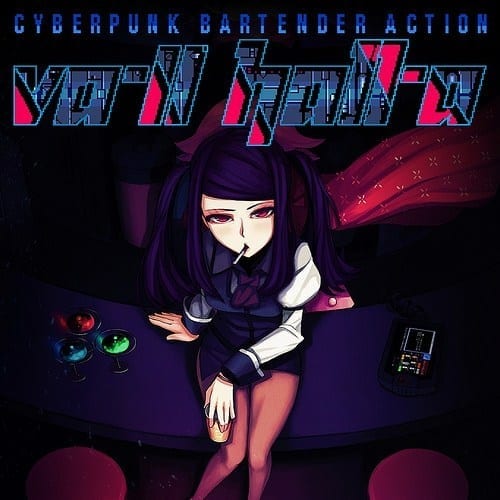