By Christopher Hubac on February 12, 2020 on Reviews, 6 More
close [x]
Tweet
No Comments

Valnir Rok is an indie game developed by Encurio and is currently in early access. I normally find it hard to review games when this has to be kept in mind, however this is unfortunately the standard I have to abide by, as I cannot accurately review what a product may be when it is currently in a state deemed worth reviewing by the developers.

Some gripes I have may carry over well into the proper release, but then again they may be addressed. I will be reviewing what I experienced with the game in its current state.

While the user interface does it’s job fairly well, it is held back but some minor issues. The first issue is that two of the dialogue boxes pop up over each other in the startup screen. The graphics menu and the server browser both appear on the same screen, and neither has the option to easily close them off, which is sloppy. Instead, you must click “servers list” in the bottom left to close the list. Not the most intuitive decision, but I’m making it sound far worse than it is. A better solution would have been for the server list to only appear when the player presses the server list button, or better yet, both pop ups could be allocated to their own section of the screen, instead of overlapping each other. 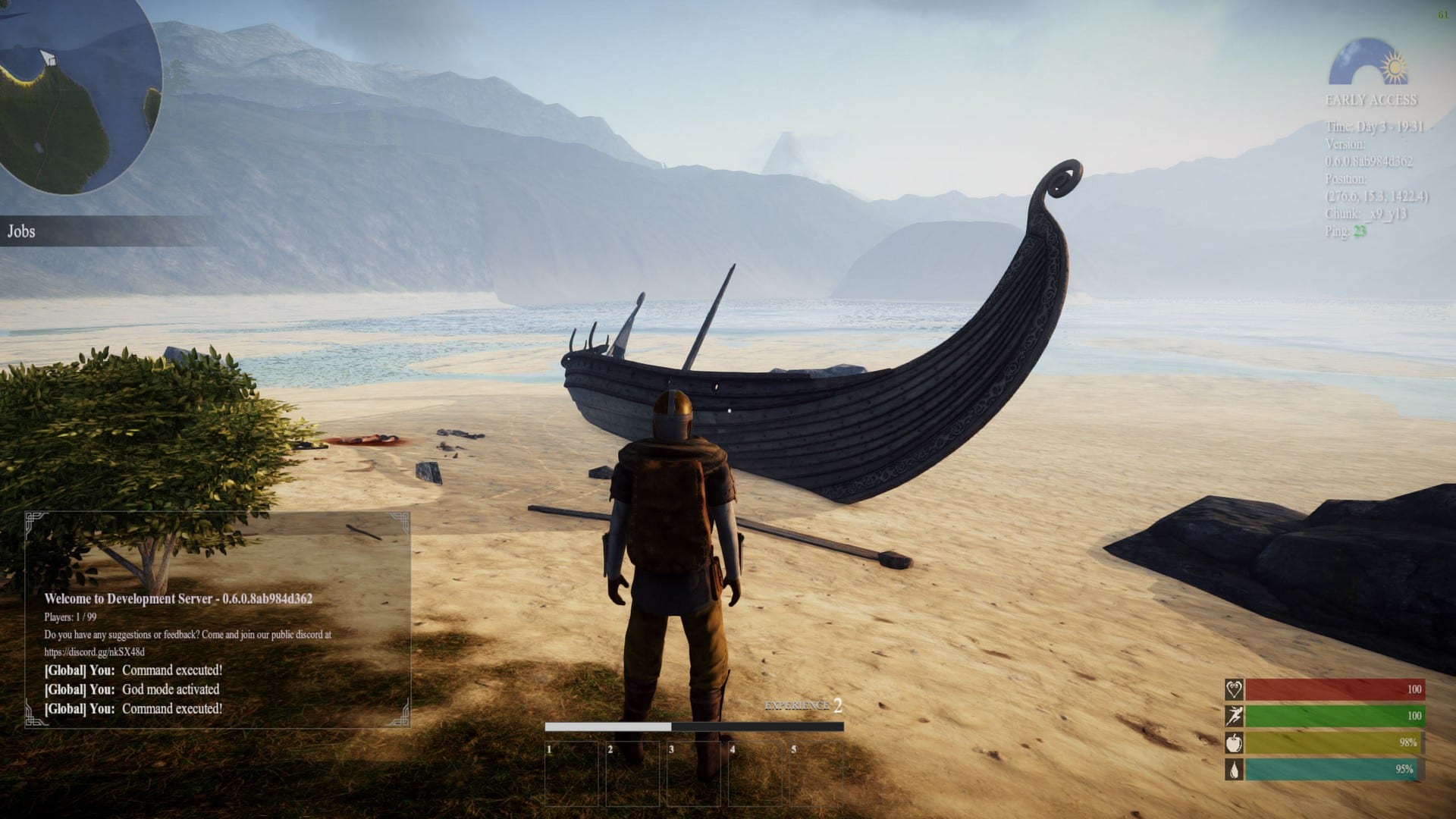 The character creation tool is functional and fine, though a little restricted for choice. Naturally the most enjoyable part of creating a character in any game is pushing the sliders to their limits, which is what I did. As a result, I present to you Yalmark.

Secondly, you’ll also notice there is white text on white snow in this screenshot. Fortunately the font choices and menus throughout the rest of the game are simple, effective, and above all, readable.

The gameplay is very similar to other survival games. As such, you have sprinting, jumping, attacking, shielding and crouching as your means to interact with the world. Jumping at this stage doesn’t really appear to do anything other than be an animation, and the characters’ footsteps continue to play, even as your feet leave the ground. A small annoyance, but nothing game breaking. Playing the game itself is more or less broken up into foraging and battling. Unlike other survival games, the battle system is a little more fleshed out, with dodgerolls, shielding and charge attacks instead of the usual strike when in range and hope not to get hit. Valnir Rok is played in 3rd person, which allows for a greater range of vision when doing tasks, but I can’t help but feel it forced the mechanics to play a little strangely. For example, let’s assume you want to cut down a tree.

In most games, you’d approach and start attacking with an axe. In Valnir Rok, you have to walk up to the tree and press the interaction button. This prompts your character to be locked into place playing a unique chopping animation. This isn’t necessarily a bad thing, as you can cancel out of it immediately, but it just seems like an unneeded additional step for something that could have been as simple as attacking the tree with an axe equipped. Had this game been done in 1st person, I doubt this would have been an issue. I feel that must be a programming thing instead of an immersion thing, as there is no animation for drinking water. 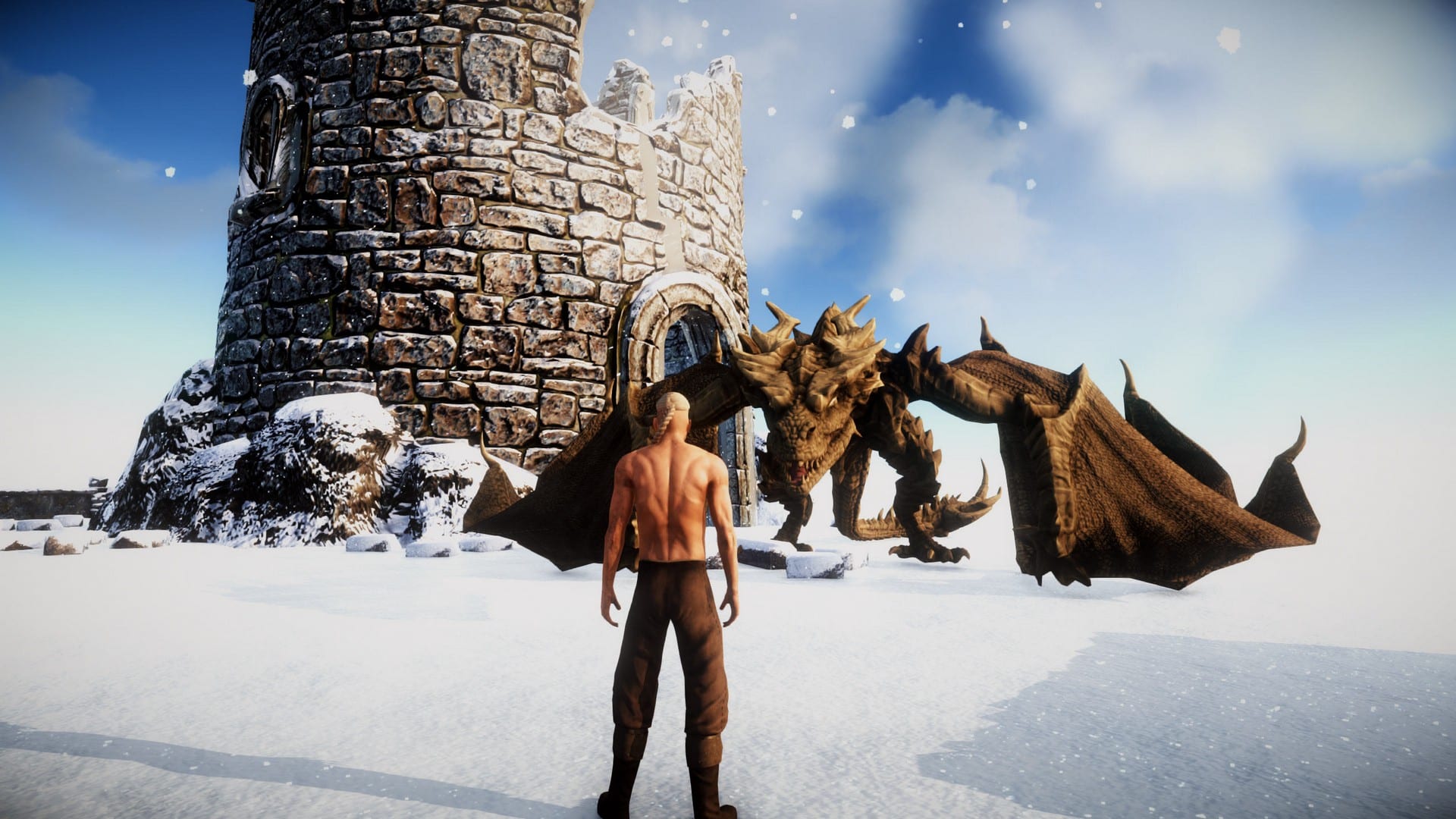 As is to be expected with survival games, you have a weight limit that affects your mobility if you go over it. The only real setback is being unable to sprint, which isn’t much of an issue until you need to start combat, as your character’s walk speed is fairly good anyway.
It is always necessary to suspend disbelief in these situations, but I can’t help but wonder where my shirtless, backpackless character is storing all these items. Your character can also be affected by the environment. Being cold causes a nice ice texture to appear around the edge of the screen. It however is a bit barebones in presentation, and could have grown onto the screen from the edges instead of simply appearing.

The artstyle of Valnir Rok unfortunately resembles too many other games in the same genre. A realistic style, but with reasonable graphic capability makes the game not really stand out much from other games like Rust or DayZ in its appearance. Despite this, the game certainly does have a very nice atmosphere, complete with a good lighting engine that helps boost the visuals, even on the lowest graphical setting. It really does give a sense of a wide open world to explore. A big problem I ran into while playing this game (on low graphics mind you) was the constant frame drop. It never ran smoothly, even when there was a bare minimum on the screen. 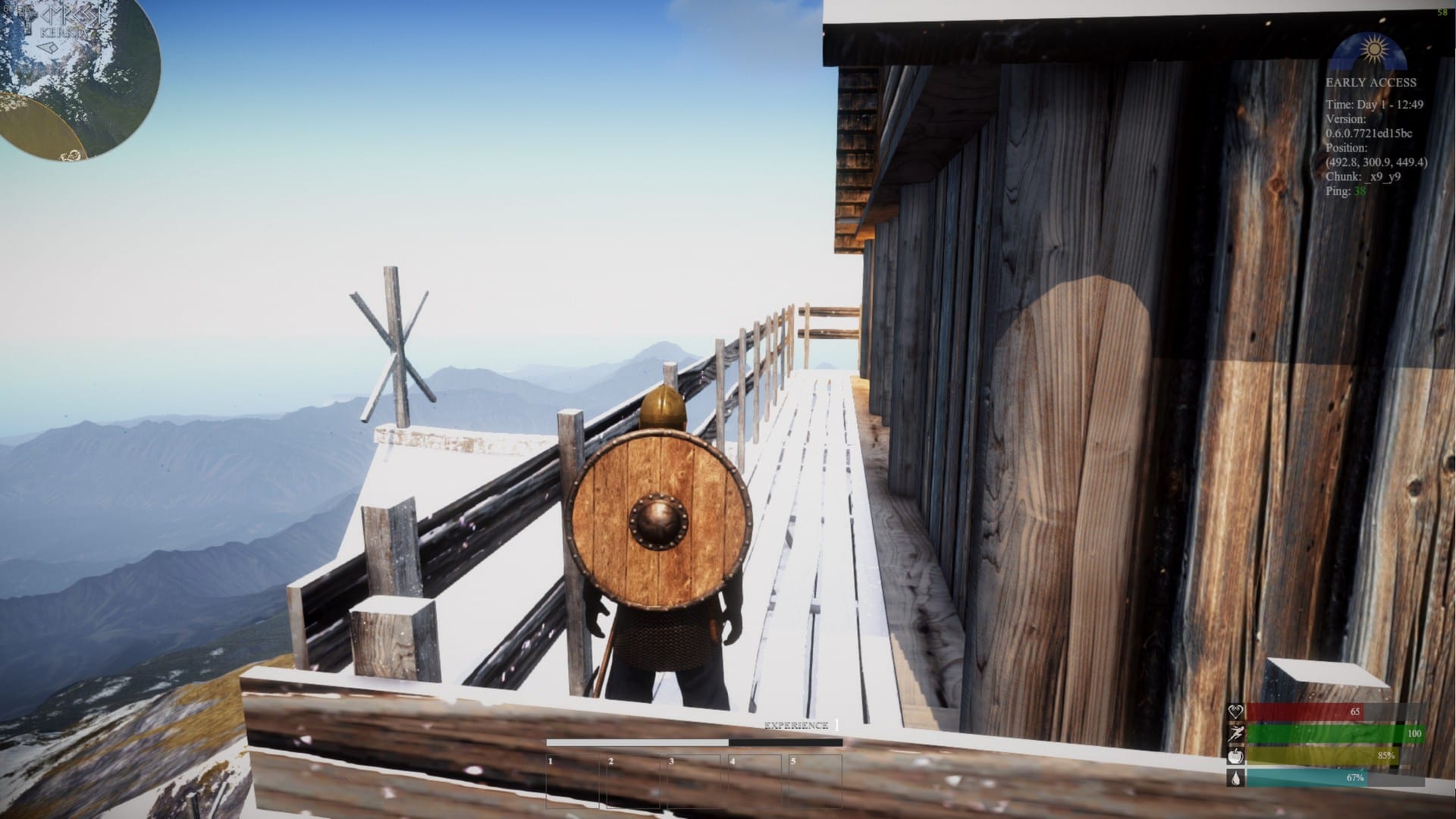 The sound in Valnir Rok is competent, but at times a bit overbearing. Many sounds play at the same volume, and despite being in a 3D world, don’t seem to play from different directions, although this may be an issue with my hardware. As mentioned earlier, I also noticed some issues with sounds continuing to play when they weren’t necessary.

I ran into a few instances of minor details I have issues with. My first gipe is the character creator. The character bobs around a lot and only stays still when adjusting features, which sounds good on paper but doesn’t reflect well in motion. I appreciate something different going on, but I would have prefered the character stay put during the whole process.

At one point in my game I got stuck on terrain, so I decided to use the teleport feature in order to reset my position. After a small countdown, I got transported to another starting point on the map, but it was halfway across the island. This at first didn’t seem to be much of a problem, considering tutorial NPCs give the same quests all over, but my main problem is that I wasn’t asked if I was sure or not. Imagine accidentally hitting that option in the pause menu when out with a bunch of friends, only to irreversibly be thrust to the other side of the game world. 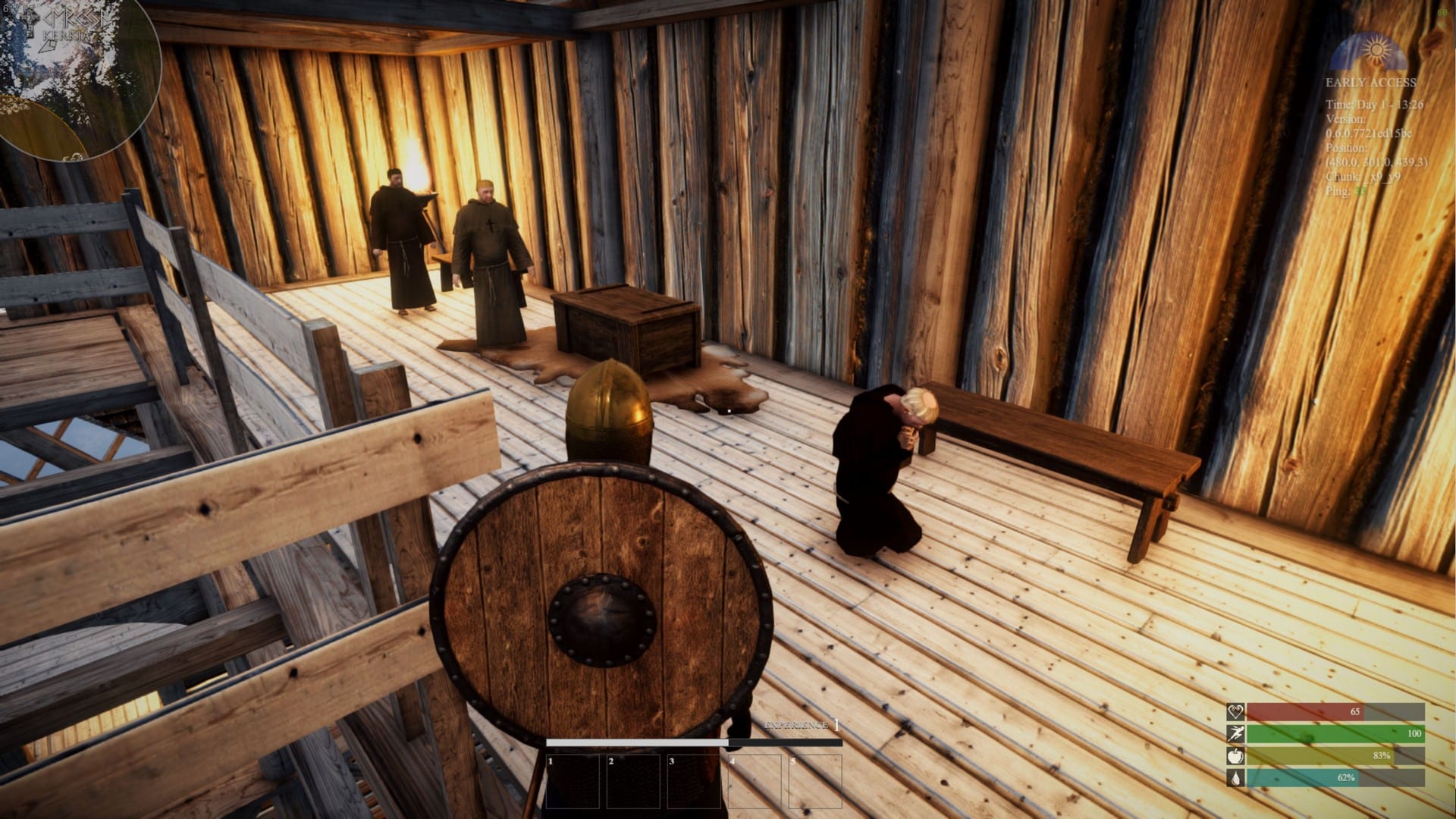 While it would definitely be preferable to not be able to be stuck in the terrain, I understand that in games like this it is an unfortunate reality, and having an option to teleport out is a good thing. I certainly do appreciate the timer though, as this prevents it from being abused by players teleporting out of combat situations.

Something that was a bit troubling was how the game handled your items. Items will show their durability in the inventory, but this doesn’t appear when equipped, so it was hard to tell which item you were actually using.

Finally, a small detail I noticed, is that when you run out of breath the outside of the screen flashes in an olive tone. Since your characters stats and stamina are shown in a similar green, this makes it a little harder to read.

Although Valnir Rok is clearly unfinished, there is still a lot to enjoy, even if it’s a bit barebones in its current state. I appreciate that they’ve mixed things up a little, with the theme being Vikings and Norse mythology, as well as having NPCs, but it still has too many shortcomings in its current state.

If you’d like a chance to win 1 or 10 Valnir Rok Steam codes, head here and fill out the entry form. Good Luck. 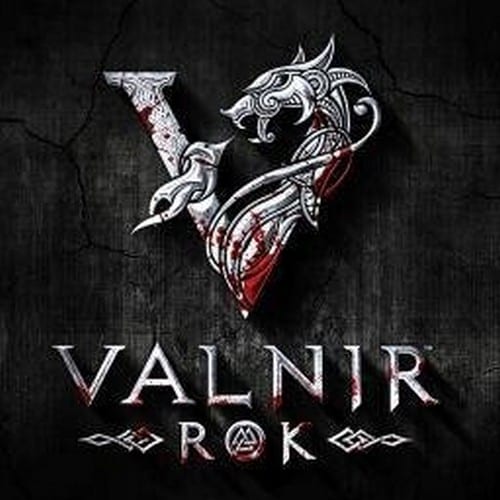