Whipseey And The Lost Atlas

Blowfish studios, the independent, Australian video game publisher are back, not long either, after dropping a previous extremely fun title, ‘SubDivision Infinity DX’. I was given the pleasure of playing and reviewing that too which is available on their website, so I was definitely excited to get my hands on their next creation. Can Whipseey instill the same entertainment and blow me away? Guess you’ll have to keep reading to find out!

So here we are. Lounging back in my chair, drink in hand, I was ready to give this bad boy a go. The moment I pressed start I felt a wave of nostalgia caress its way over me, taking me back to the goodness of my 16-bit filled childhood.

The game opens with a short starting animation of a young boy opening a book then being sucked into its very pages, turning into a little, pink balloon that whips everything (I had a similar girlfriend once…Ah nostalgia), called ‘Whipseey’. Straight out the gate, the first level is loaded, and I was left soaking it all in. With a very Super Mario 3 feel to it, this slide scroller has vibrant, bright colours, a vast array of different types of enemies and fun combat play. Starting with 5 lives, that you will need, believe me, you will bash enemies and collect their coins. Other than his obvious whipping, Whipseey can use it’s head lash like a gliding helicopter, the other controls are super simple and are listed below:

I quickly fell in love with this game but just as quickly it started turning to rage as I started dying in the same room over and over again. 4 days later, after the shifting of controller from hand to hand to try and multiple deep breaths later, we eventually got there.

In the top left hand of the screen is your standard health bar. This allows you to take only a few hits before losing a life, unless it’s spikes which will kill you instantly, even by the touch of one tiny little pink foot. Boy was I worried this review would only be of the first level, the level of challenge is that real. It was making me question my gaming ability, and I should because it was a nine-year-old who put me to shame but also revealed a glitch in the matrix. On this fateful play, I noticed a glitch in which the health bar was gone, and I was like a god. Enemies couldn’t see and I was like a ninja striking from the shadows, they never saw it coming. Only falling down a hole would kill Whipseey. The glitch did stay through the first play through, but thankfully was gone after another initial boot up. While it was fun playing that way, it wasn’t the way the game was intentionally designed to be played but was just a technical flaw I experienced.

The game has checkpoints thankfully, a must in most game genres now a days, best thing to do is utilize them. Another wise thing to do is to collect as many coins as you can, as 100 means another one of those precious life extensions. While the coin count returns to zero to begin for the next 100, trust me you’ll need as many extensions as you can get, especially with the boss fights. Just remember, watch for their patterns, then die a whole bunch of times, still. The Lost Atlas has a range of different levels with their own challenges, with each feeling very distinctive, for example, snowy landscapes and towering castles to cutesy forests and sizzling beaches. Each with a customized feeling and enemies’ boss, the forest level really reminds me of Spiny from Mario Brothers but juiced up on steroids.

The bright, Flamboyant Pops of colour are reminiscent of the early home consoles; NES, SNES and Mega Drive, any fans of games on those consoles will love the graphics of Whipseey. It really is a hit of 90’s nostalgia, though it does make me worry that today’s young gamers wont appreciate or enjoy the look like I do, since they seem to want is 1080P HD blah blah blah. Still a cracker of a good-looking game.

All in all, my time with Whipseey And the Lost Atlas was fun, a little rage inducing, but hey, what game isn’t nowadays. Plus, it’s also a single player experience, I LOVE that. The throwback to retro games is all that comes to mind playing this game, I may pop on my emulators and dig out some classics. I certainly will be playing Whipseey again, without the glitch, to continue to hone my abilities. If you’re a fan of the Blowfish Studios like I have become, or challenging, fun, side scrollers in general, you’ll definitely enjoy this new fabulously pink outing!

Whipseey And The Lost Atlas 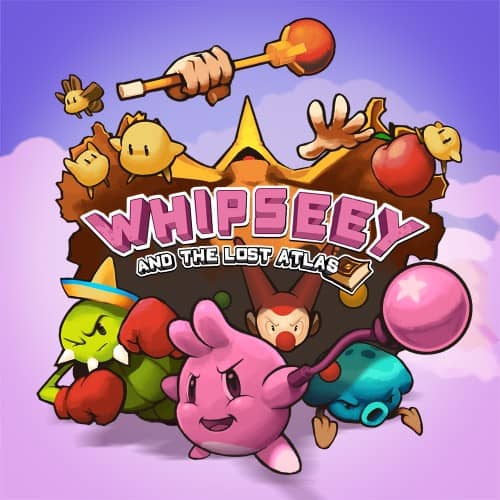 Published by: Blowfish Studios
Developed by: Daniel A. Ramirez

Jump and Whip your way through this epic adventure to help Whipseey solve the mystery of the Lost Atlas in this retro inspired action platformer.