By StacefaceMayhem on August 29, 2020 on Reviews, 7 More
close [x]
Tweet
No Comments

‘Windbound’ by 5 Lives Studios, is a survival game that pulls out all the stops on ocean fairing and scourging across the 7 seas. Published by Deep Silver and Koch Media, this title is available as of now on PC and all consoles, even the Stadia, but did it let me live out my Disney Moana dream?

You play as Kara who is separated from her tribe after a huge sea monster destroys her boat as they journey across a perilous ocean. Washed up on shore and a little worse for wear she must now find her way back to her people with only a mythical oar. With this newly acquired tool she must travel far and wide to unlock the keys to the past, to get to where she truly desires to be. Kara is quite a likeable character despite no dialogue, which is good as the story at times is so slow and pushed to the background that you forget it is even there till you reach a cutscene.

Basically, your main objective is to survive; survive as you scavenge, survive the oceans, survive on your own, very typical survival game really. Your first chore, because let’s be honest, NO ONE likes a list of jobs to do in a game but we are all a sucker for punishment, is to collect resources to then craft your first seaworthy vessel, while keeping your vital signs kicking. With this boat, you are then able to extend your adventures, beyond your own little island and off far into the distant sunset. Like similar games of this genre, everything you need to use must be built with resources you have collected including weapons, fires and other useful tools. You then must take your toolbag of junk and tricks from island to island to ignite 3 totems then sail to a sacred island to close out the current chapter. This mysterious place, shrouded in an aura and hiding secrets, is where you will have to choose one perk for the next chapter, so pick well as you only get one. 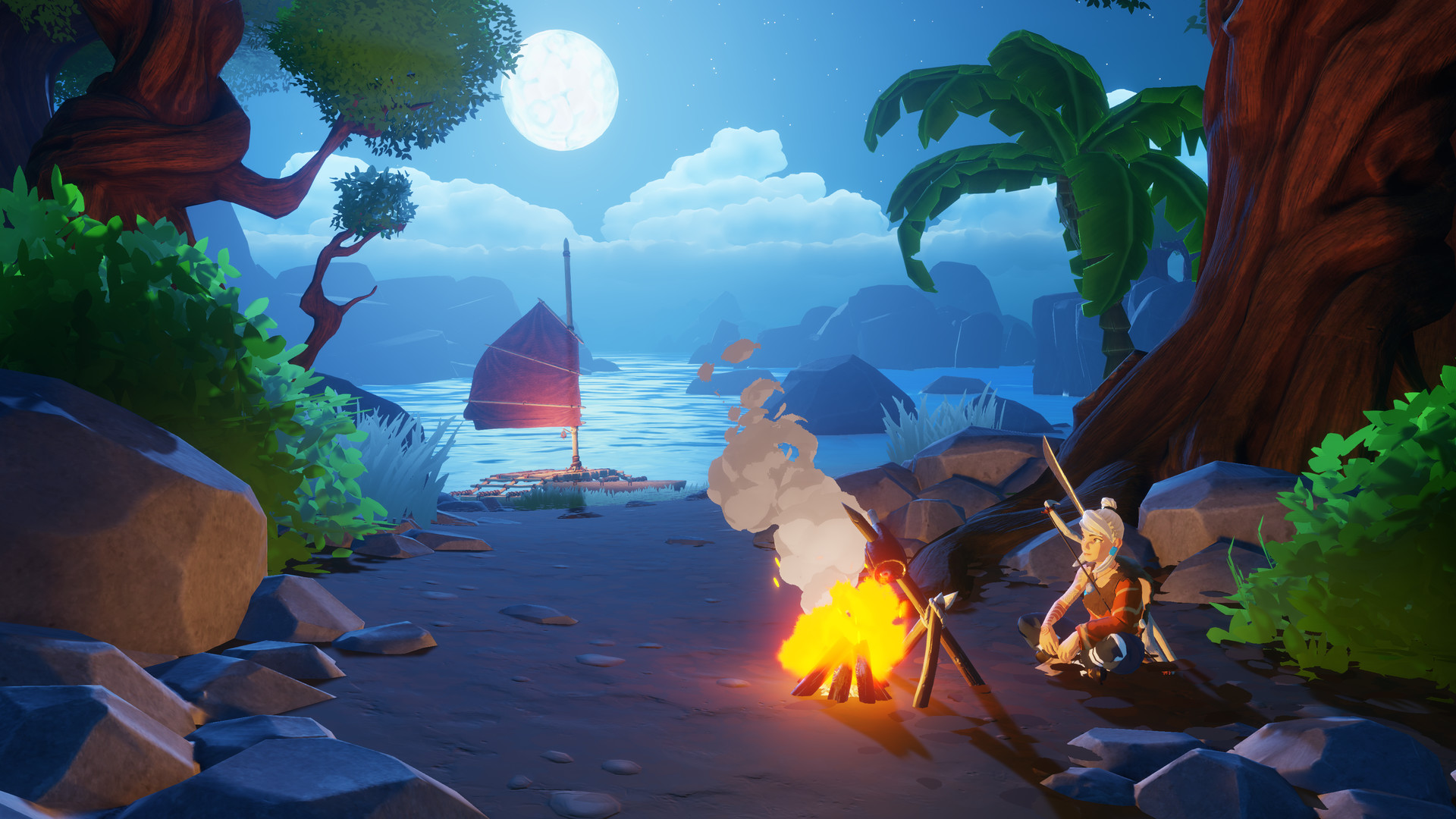 As well as crafting you must manage your own hunger and stamina. While I found the health quite easier to sustain despite food going off faster than you pick it, stamina is a real issue in the game. Stamina simply drains too easily. You can’t run more than 1 minute without it fully depleting which then in turn starts chipping away at your health bar then causing real issues. This, in turns slows the game right down especially at the start when you want to hook the audience in because it takes so long to do anything.

Even when a perk is added to sprint longer from the holy gods with an offering, you don’t get much more reprieve. Another element that pulls you right out of the game is the pure length it takes to cook, bake or tan anything. If your island is depleted, you have nothing to do but wait there like a dodo, which gets very tedious, very quickly.

Sailing the boat is definitely a highlight, as you take to the waters and have to steer it through coral reefs and jagged rocks. Upgrading the parts feels some actual sense of accomplishment as you stable out and make it handle better on the choppy waves. Steering it is fun to master as you balance out raising and lowering, tightening and loosening your main mast against different directional wind patterns. It was very Sea of Thieves like, and so enjoyable I could have literally just calmly sailed from island to island and been happy. 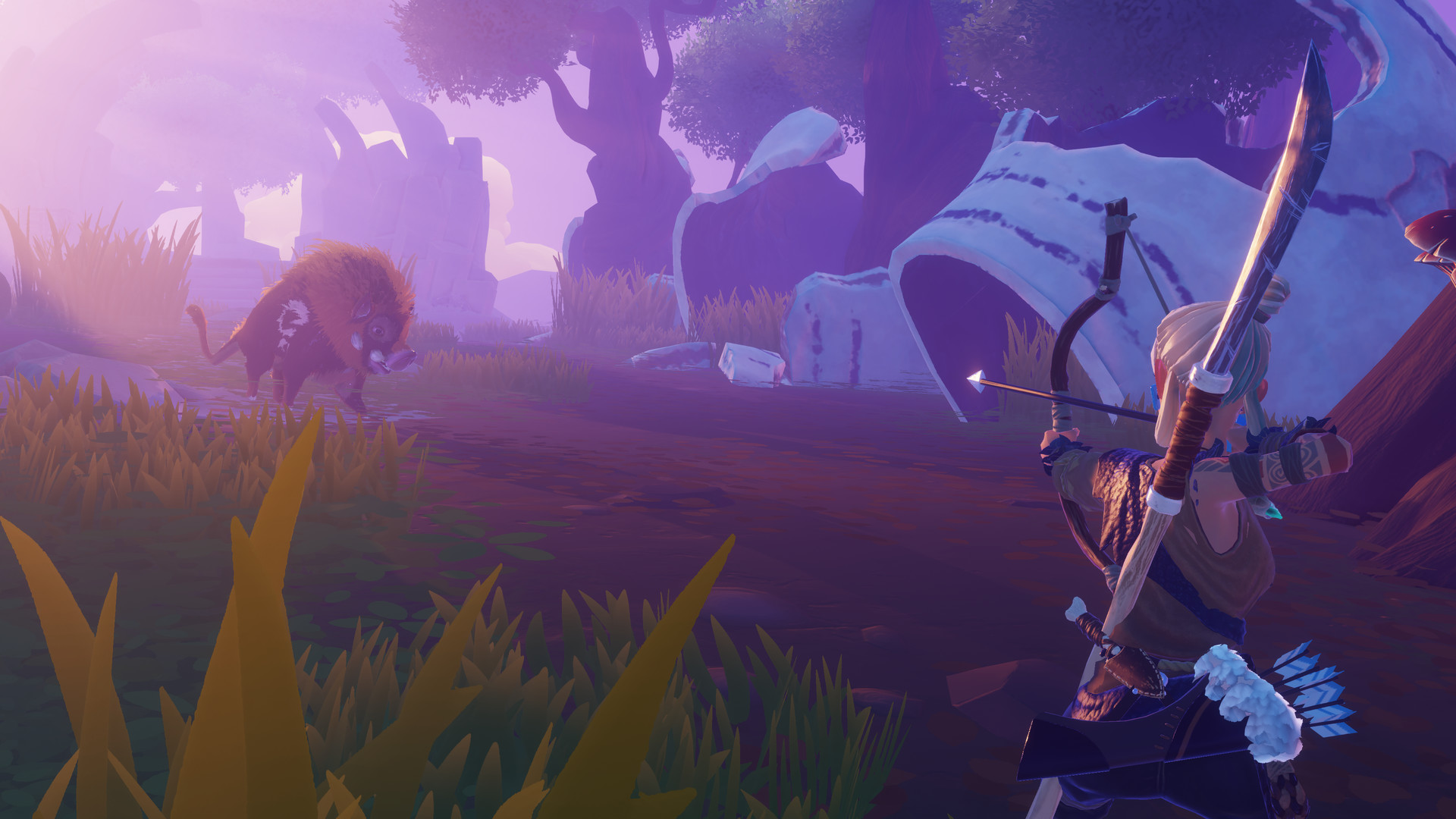 The combat is very simple and at times pretty fun as you dodge and dive in the thralls of battle, however this can also be a let down by the fact the enemy creatures can often be cheesed into dying as they are pretty dimwitted. The lock on was a god send though and a muchly needed feature. Frustratingly and the most perplexing design feature is the fact when you do eventually die you completely lose your boat. I don’t mind going back to the start island, or even losing my materials, but having to rebuild a boat I spent ages on each damn time, in Storyteller Mode nonetheless, made me irritated beyond repair numerous times.

The artwork is quite pretty with beautiful hues of watercolour-like cartoony shades, that shift in and out of focus on the horizon. Storms simmer in the distance and waters crash on rocks in such a serene way that is very admirable. While the music complements the graphics well with calm and tranquil music while exploring and jarring during combat, it is much like the overall game; not overly complex or memorable.

Overall, Windbound is a solid affair but just doesn’t quite put the winds in my sails, more like a light breeze. I did enjoy my time with it but often found myself more frustrated towards the end as fatigue of redoing everything set in. Windbound definitely dips an adorable toe into the waters, but without that sense of accomplishment throughout, it lacks a full blown splash. 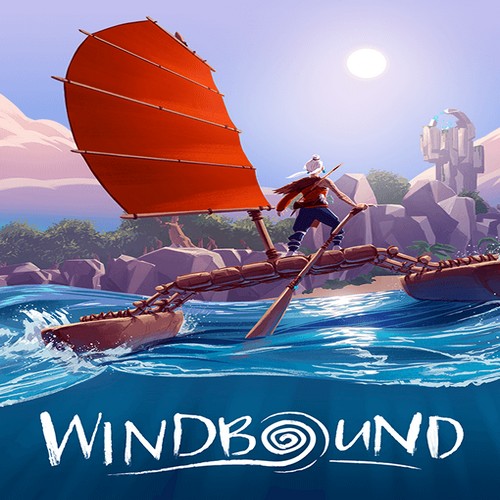 The Forbidden Islands are Calling, Unlock their Secrets. Shipwrecked on an island, explore, adapt and navigate the land and perilous seas to stay alive.