Witch Thief tests your speed, maneuvering and timing in this fast-paced shooter. Where every move can bring you one step closer or one step away from reaching your goal of obtaining the ancient Grimoire. The music really gets you going and keeps the heart racing for more, with visually amazing gameplay that looks like a magic light show for your screen.

As I said, the music really gets you in the mood and going for more, upbeat rhyme and a real focus to match the overall atmosphere of the game. With a lack of a story line at the start besides that you are Witch Thief and your goal is to defeat waves and waves of enemies to obtain the ancient Grimoire. It’s a push towards a Simple and fun focus of the game for anyone to pick up and play.

Most enemies look (besides from a color change) and feel the same only offering different attacks. It’s when you come to a boss that the real business end of the game comes into play, especially when you find yourself screaming at the screen with death after death as you take everything before that for granted.

But to backtrack again, the Visual effects are on point. Not just with the spectacular light show but with the games “anime-esque” animations that dominates the game characters looks. When in the heat of battle, you can be forgiven for thinking you are in a dragon ball z battle. Except Goku is played by an attractive young female witch that can throw more power balls than vagetta on a good day and to mix that with the game’s soundtrack, makes that the keystone of the game’s overall experience.

With the same speed and intensity of most shooter games that keeps you coming back for more, developers Cardboard Keep brings a visually stunning game. If you enjoy other shooter games like Cuphead or the classic Metal slug, I say give Witch Thief a go. 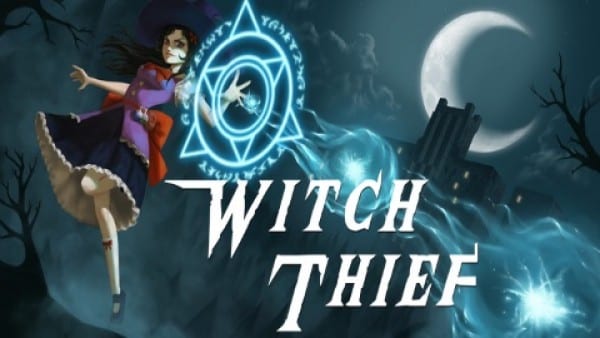 Play as the snarky Witch Thief, on her quest to steal all the magic she possibly can! Naturally those who have the magic don't want to give it up so she does what she does best. That is, kicking in the front door and taking it all anyway! Dodge duck and weave through terrifyingly intricate patterns of magical projectiles as you seek the greatest treasure of all. The Ancient and powerful Grimoire!