It’s creepy, it’s kooky and it’s definitely all together spooky! I have braced myself to experience and endure this up and coming horror title and let me tell you, it doesn’t disappoint!

GAMEPLAY
WORLD OF HORROR is an upcoming horror, adventure hybrid game, heavily drawing influence from old point and click / bit-tone heavy games of the 80s and 90s. Set in 1980’s Japan, you’re presented with a slew of horror-based mysteries involving ‘Eldritch Gods’ that have been plaguing Japan. Each mystery is overseen by a total of 5 different protagonists, with 12 different mysteries to play through and, hopefully, solve.

Each mystery is set with a different location and a main antagonist from the other realm to take down and defeat. These are all extremely well presented, and the black and white imagery of a tall, ghostly woman who’s been rampaging through the local high school with a pair of scissors may seem tame to read, but visually, let’s just say I’m glad I was at home and in reach of spare pants.
Successfully solving a mystery rewards you with a key. When all keys are collected, you are tasked with travelling to an in-game lighthouse to deter the ghastly supernatural entities to the best of your human ability. Why a lighthouse, I hear you ask? Well, I can’t reveal every mystery, now can I?

In-game, you’ll be provided with a ton of options, actions and tasks whilst solving each mystery. Investigating the surrounding areas, collecting random objects and performing rituals are just some of the options given to you during your playthrough. You can progress whichever way you want, but doing some detective work prior to summoning the main villain via the ritual may be your best course of option.

Turn-based combat is another factor of this game. Naturally, I mean, it’s not like you can really negotiate with the undead, now can you? It would be a bit anti-climactic in the end if you could, really. Hi ghoul, can we work out a way for you to not cut the heads of people? Over some tea, perhaps? The combat does a stellar job of making you think quickly on your toes about how best to approach your latest enemy. There are a ton of menus and complementary actions to sift through and choose at your leisure. This can range from going all-out attack, playing it defensively or relying on an ally to do a bit of the grunt work.

GRAPHICS + SOUND
The art work of this game really does show a deep love and care for the nostalgic art style and approach to the games of yester-year. Developer, Panstasz, has really taken the time and devil-in-the-detail approach to providing a thoroughly thought out and accurate recreation of that era, thereby giving the game an in-depth and immerse playing experience. The sound is the real MVP here too. 8-bit is alive and doing very well in this title as all in-game sounds have been recreated to also revive and relive the retro era of sound. Explosions, actions, attacks, screams, background audio and in-game soundtrack all have an 8-bit compressed miditone vibe to them, which is absolutely fantastic!

CONCLUSION
Do not sleep on this game! I highly recommend ‘World of Horror’ for a retro-enthusiast and horror buff out there. You’ll be addicted the second you hear the initial ‘load up’ screen. The point and click, mystery solving aspect is a really time investor! Just, maybe, don’t play with the lights off? 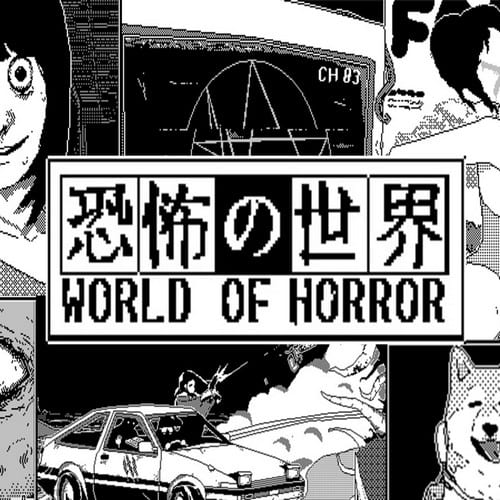 Experience the quiet terror of this 1-bit love letter to Junji Ito and H.P. Lovecraft. Navigate a hellish roguelite reality with turn-based combat and unforgiving choices. Experiment with your deck of event cards to discover new forms of cosmic horror in every playthrough. The inevitable awaits...