Zombie Army Trilogy has been out for some time now, since 2015 in fact, but like many games already in the marketplace, it has made its way to the Nintendo Switch.

I will get straight to the point of my review. I’m not really here to review the game a whole as such, but more the Nintendo Switch part of it.

Due to the age of the original game, graphics on the Switch are very much the same as the PC version. Both docked and undocked mode look perfectly fine. And in my many hours of gameplay, I notice zero graphical glitches. With the state of some previous ports to Nintendo Switch, this is a great start. 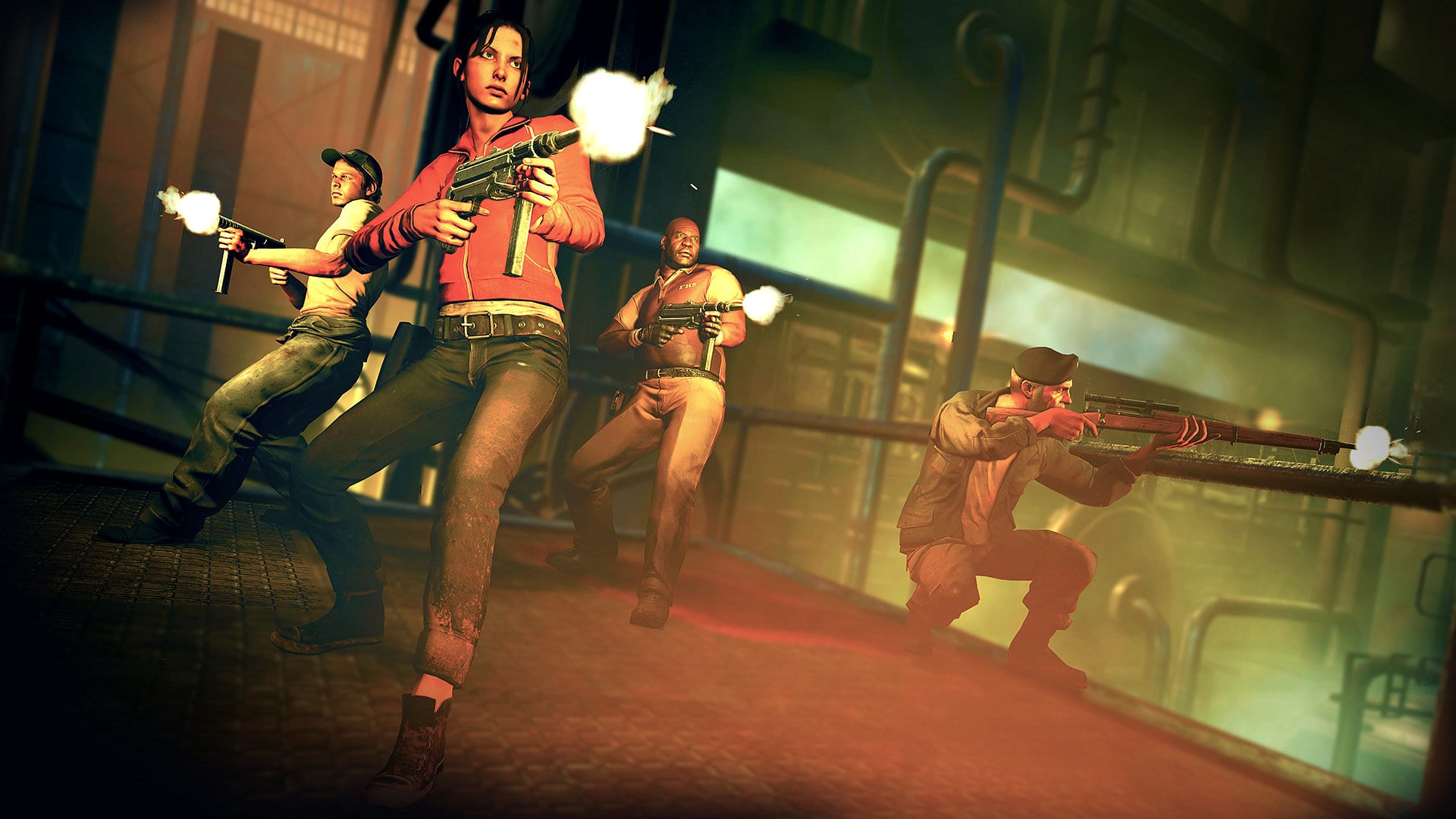 The controls is where the game falls down. Or to be fair, the Switch falls down. It is not fair of me to take any points off the crappy joystick controls of the Switch on the JoyCon’s. The sticks are just simply too small and too short to offer any sort of accuracy in any shooter of any kind. It’s not so bad if you are machine-gun-spraying zombies, but to use a rifle, looking down the sight for that long head shot is just frustrating.

There is also the option of using the Switch’s motion controls to aim, but even that is just underwhelming, albeit better. Better, but still does not offer a full range of motion when you need it the most.

Jump to a Pro Controller or similar and then you hit a sweet spot in controlling your zombie-destroying character. Accuracy is on point; movement is actually as advertised now and the game now is played how it was meant to be.

One thing I did like was battery life in undocked mode was pretty good too. At 3hrs, I would most likely lose concentration before the battery went kaput. In saying this though, my Switch is probably a year old now and who knows what state of health my battery is in.

Forgetting about the game for a minute, as far as ports go, Zombie Army Trilogy has done a wonderful job. Yes the controls suck, but this is the fault of the JoyCons, not the game. Grab a pro-style controller and you’re good to go. The visuals are not the greatest when compared to some games of today, but this game is 5 years old and is not claiming to be “Remastered” but simply added to the Nintendo Library.

For those that haven’t played the game yet, on any platform, keep reading for the rest of the review on the game itself.

For everyone else, 5 out of 5 for the port, just do yourself a favour and use a pro-style controller.

Zombie Army Trilogy tells an alternate tale of Hitler as he commits suicide and lets rip a zombie apocalypse on the world.

Playing through the myriad of chapters, about 18 in total, you will quickly learn stealth is not important, nor is it required. Not even a bit. You can simply grab your shotgun or machine gun and have a whale of a time blowing limb from limb, zombie after zombie.

While I do say stealth isn’t required, like all zombie games and movies, they are still attracted to sound. The louder you are, the more you attract. So, keep that in mind as you get carried away laying down piles of zombie hoards.

You do also have rifles which; even at close range are not totally awful either. 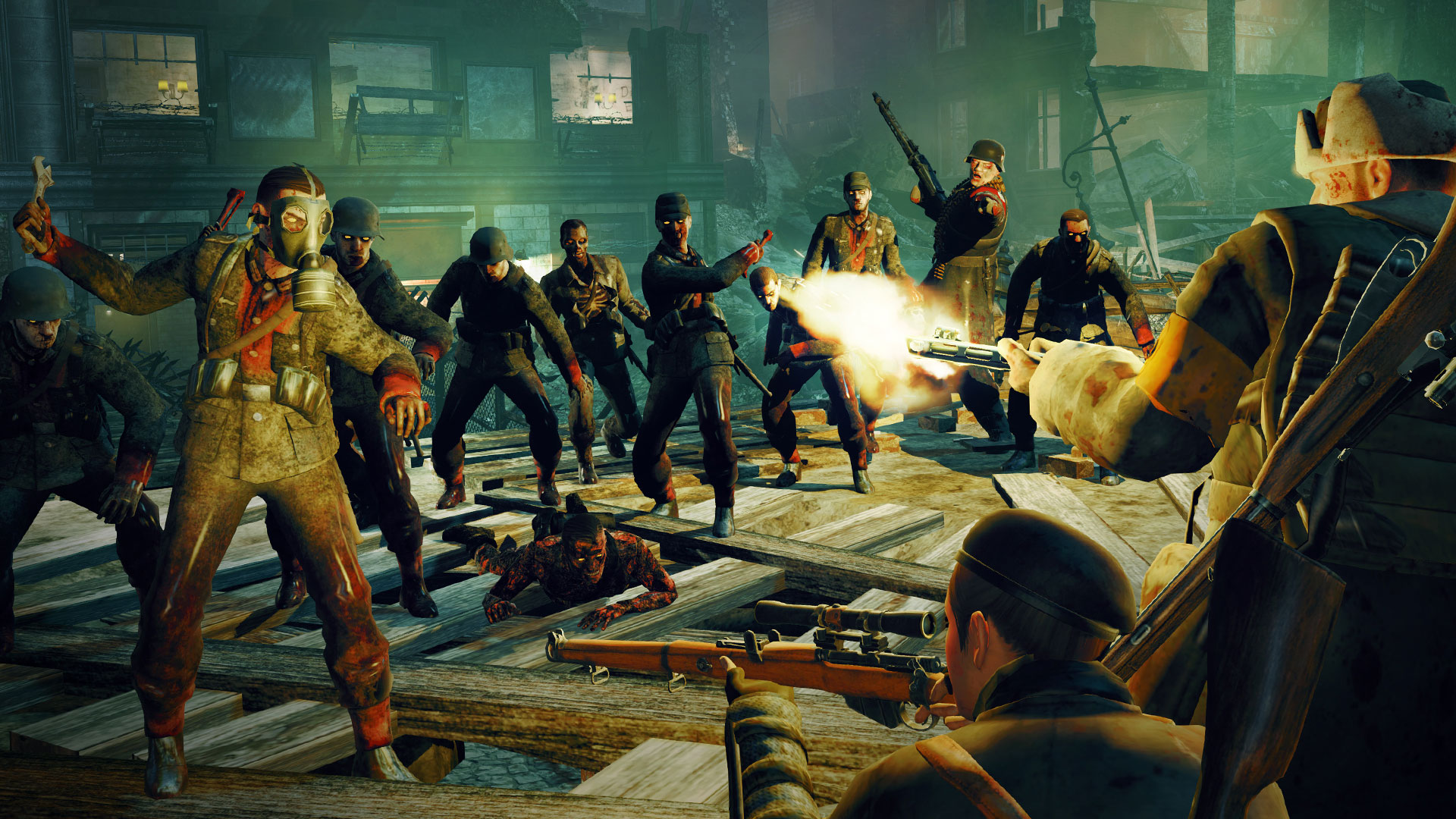 As chaos ensues, you will get pushed back. You will get overwhelmed and you will die. If you dig in to your arsenal of weapons a little further, you can throw some paint-the-walls-with-zombie-guts grenades or better yet, to slow them right down as you are making a hasty retreat, you can put down some trip mines or drop some dynamite. Dynamite won’t go off unless you shoot it, so remember that tip.

If you do get a zombie gnawing at you, you can kick them off. It isn’t super slick in terms of game mechanics, but it works.

Speaking of zombies, well it is a zombie game after all, the variety of said zombies are much. You will be facing the simple dead soldiers ranging to heavily armoured ones. And some will even be well equipped with weapons, so beware! The environments in which you will face these hordes is well ranged also taking place in different city types and also in forests that should only exist in nightmares.

Campaign is great and one of the great parts of campaign is can play it co-op with mates. Even now, co-op campaigns are still few and far between but have been making a comeback in the past 12 months or so. Next you can head to horde mode and you will be faced with wave after wave of zombies. Horde mode doesn’t require any objective completion or missions to be done but rather, you just need to survive! Be sure to have some trustworthy partners for this mode so as you can survive as long as possible!

Zombie Army Trilogy is not a new game, but it is new on the Nintendo Switch. Overall, this is great game to get your hands on and now you have yet one more platform to play it on. Kind of a win-win situation of you ask me. 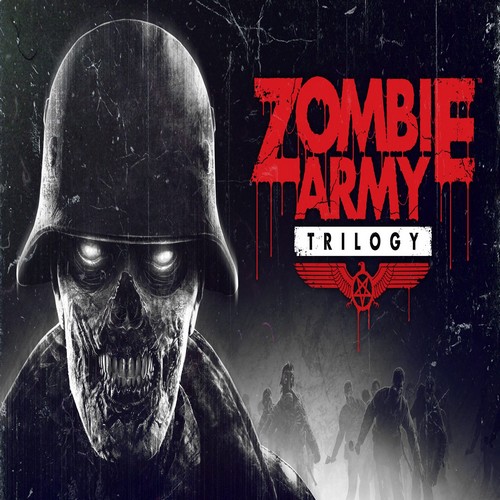 Zombie Army Trilogy is a pulse-pounding third person shooter with three epic campaigns, a heart-pumping horde mode, and intense horror action. In the dying flames of World War II, a legion of undead super soldiers threaten to overwhelm the whole of Europe. Fight alone or team up to save humanity from the zombie menace Battle through three epic cammpaigns across 15 demon-infested missions. Play solo of fight back to back in online or local wireless co-op for 2-4 players. Dare you take on the challenge?