By StacefaceMayhem on November 6, 2020 on Reviews, 6 More
close [x]
Tweet
No Comments

Chickens and Noir, what possibly could be a stranger combination in an investigative title. ‘Chicken Police: Paint It Red’ developed by The Wild Gentlemen (well played I saw your names in the lore) and published by HandyGames, is just that, a murder mystery, ‘who done it’ game featuring none other than your feathery friends as the main star. This game was right up my alley, and I snapped it up straight away as it culminated my passion for all things furry, crawling, and flapping with my intense love for Sherlock like, noir, buddy cop classics.

Players will be shocked when the title opens up on our brooding hero, Sonny. Sonny Featherland is no typical copper, he is a chicken. An anamorphic, chicken-human hybrid. This feathery detective lives in a world where every animal is seemingly mutated with human bodies and co-existing..almost perfectly. Mr. Featherland is the former lead detective of the Chicken Police, serving his leave out in his dusty old apartment, nursing his bullet hole to his comb.

Very clique to the style, but oh so awesomely, Sonny enters to find a classy dame waiting for him in his office, her mistress is in dire distress and unfortunately dating the biggest mobster in town so only Sonny can be the one trusted to help. With the help of his buddy and all-around renegade partner, Marty, Sonny must solve the mystery behind these threats before body bags begin stacking up! Despite the vintage 1940’s tropes, the story is just so damn likable and fresh that I just wanted to keep knowing more and more. It does have some very long-winded sections that could be wrapped up faster but regardless it is a very addictive tale. 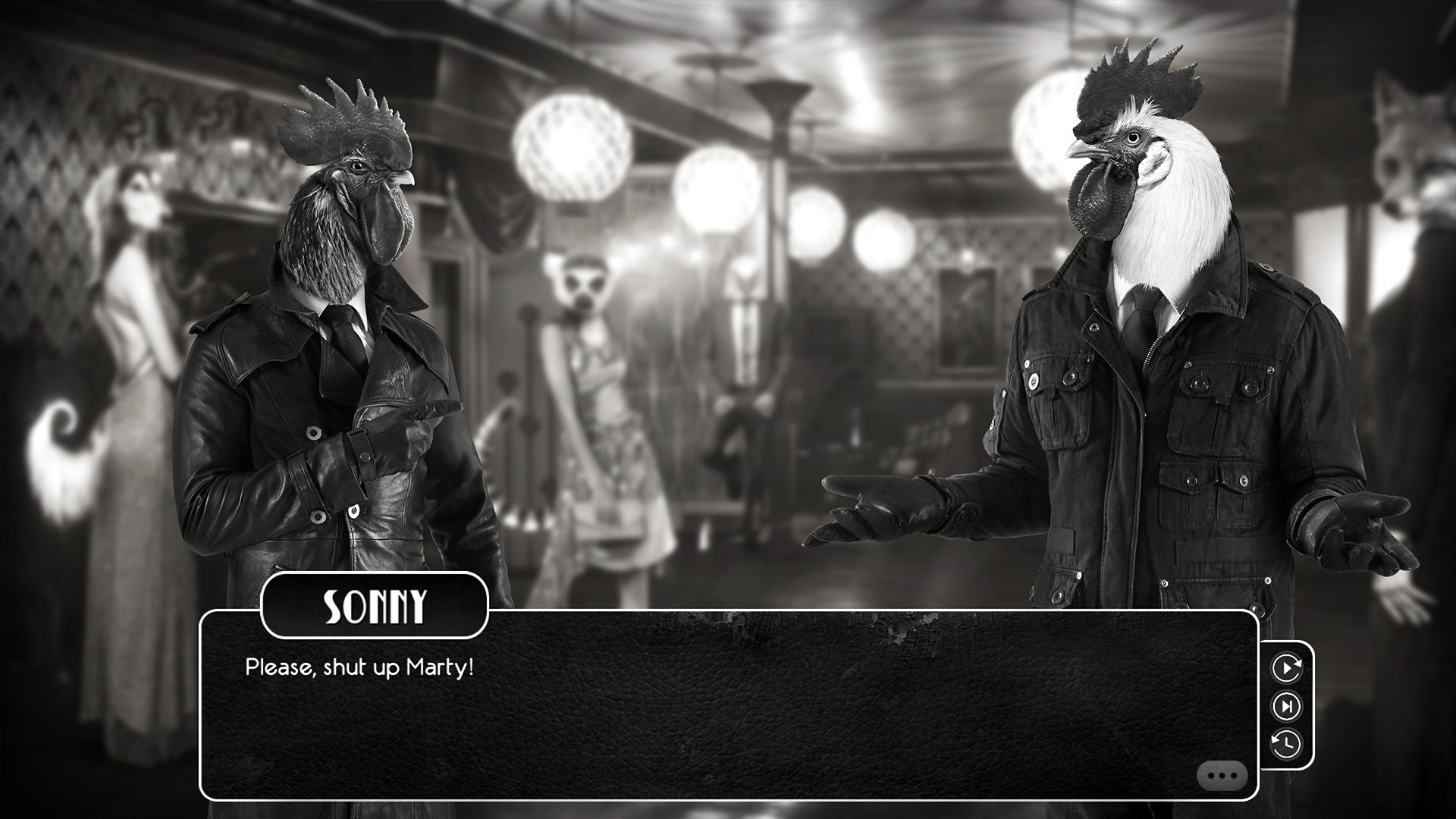 The gameplay centers around a typical point and click tale like games of the past such as ‘Monkey Island’ or ‘Sam and Max’. Very simple. Each area is split up into scenes where you collect evidence using your questioning and deductive skills pushing your detective meter into positive or negative. This ability will help you build an impression of a suspect and indicate to you whether your investigation is going well or not.

At the end of the sequence of events you get a questioning rank, outlining your focus accuracy and how many questions you needed to make the chickens cluck… get it. Oh, don’t worry. You are also given a map of locations and a journal to organize your case notes and evidence like you are some kind of Dick Tracy. There is a range of side and main missions to complete but make sure you get to all those side missions as they close as you progress through the main story.

The game is a sight to see and is absolutely gorgeous as it slams all your senses. Draped in hues of black, grey, and white, it is very Sin City like as it uses colour pops to bring the environments alive. There is something so creepy but unique and endearing about photographic heads of animals imposed on human bodies and really make you question yourself as you watch a charismatic rat or a cat swing their womanly curves across the screen. 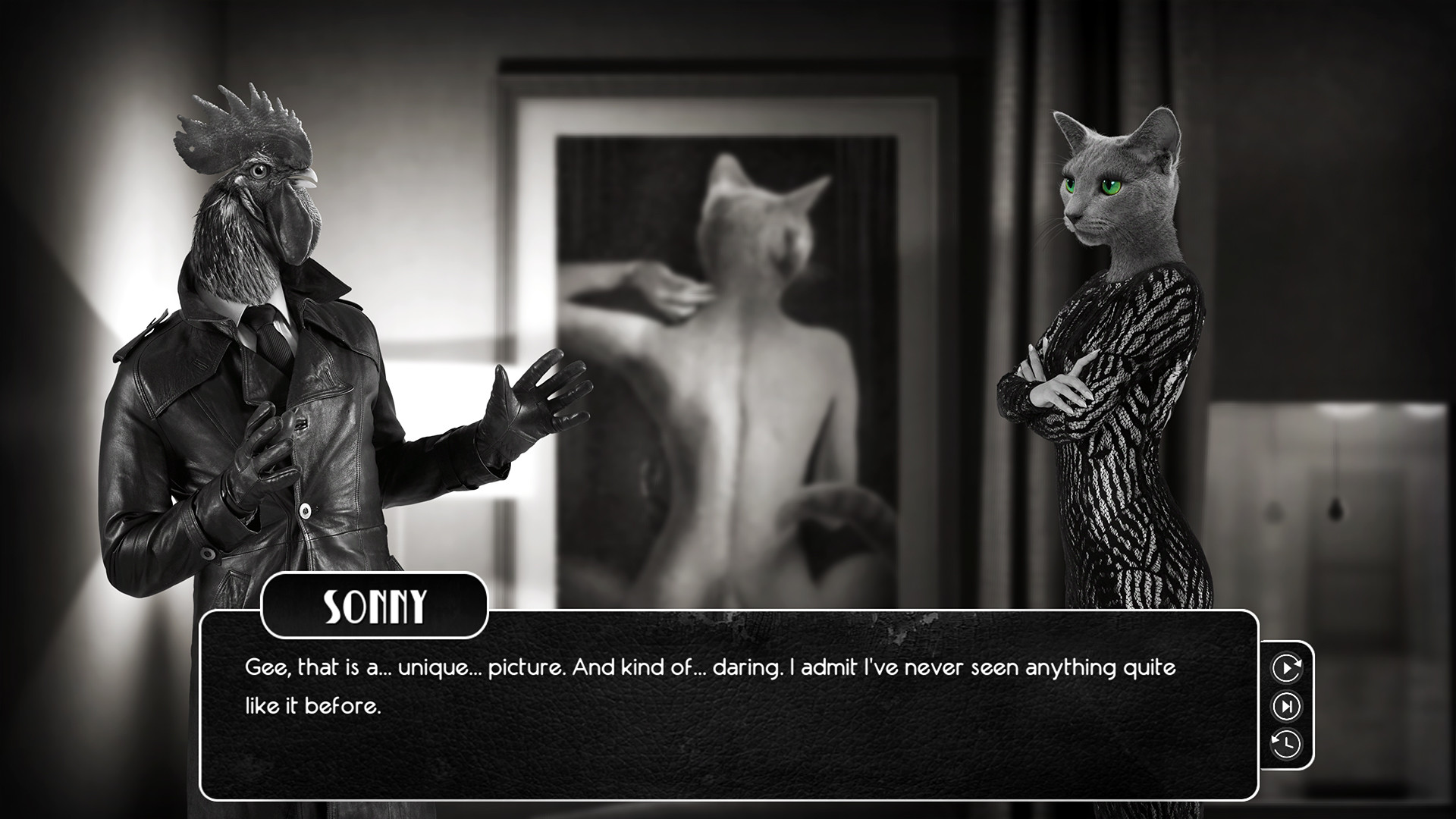 The use of still images on moving backgrounds is such a quirky style. I dig it. The voice acting albeit cheesy is amazing with 1940’s buddy cop twang, with plenty of feathery puns to add that extra layer of cheddar. The music also adds to the time era and is very eclectic of the Noir scene with the club environments and menu filled with the pipes of sultry female singers and jazzy backing bands.

The game was very clean and crisp in development though sometimes the dialogue would lag out a bit when it was trying to load and update the case status, this would halt the flow of conversation but thankfully not for long. There is also the inclusion of slight mini-games such as a shooting range, but I find these don’t add too much value to the game either and also halter the flow of the story unfolding.

Chicken Police: Paint It Red is easily one of my favorite titles of the year. I picked it up on a whim as I was attracted to the quirky art style and noir genre but boy was I impressed with the tale and gameplay that tagged along with it. What the cluck are you waiting for? Get on the case and sniff, scratch, peck and claw away at this murder mystery. 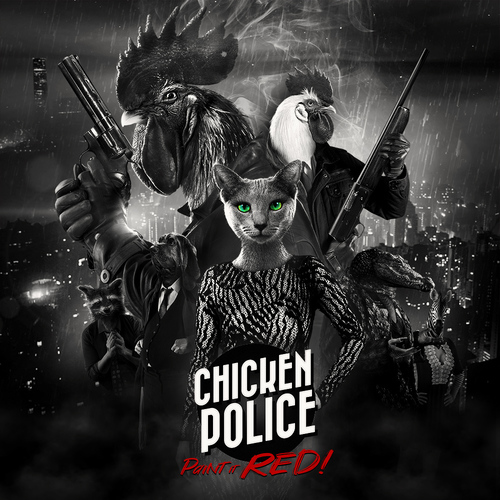 Published by: HandyGames
Developed by: The Wild Gentlemen

A wild tale of love, death, chickens, and redemption! Chicken Police is a buddy-cop noir adventure, with a carefully crafted world, a gritty story, and lots of absurd humor. The game mixes elements of classic adventure games with visual novel-style storytelling