Coffee Talk is no exception from this, you create your own name but essentially you are the owner of a nightlife coffee shop in Seattle. Your clientele are a range of different supernatural characters, werewolves, vampires, orcs and many more colourful characters. Coffee Talk is just that a talking simulator, the idea being you follow and grow attached to different NPCs and the stories they have to tell.

The game doesn’t really require much of a tutorial as the mechanics are pretty simple, you just click across the screen to either continue a conversation or access your phone. What was a pretty cool mechanic was that your phone gave you access to a couple “apps”; a music app, where you can control the music that plays through the coffee shop. The downside to this was their were only around 5 different songs and they all were coffee house music – soft jazz and rock. On the topic of sounds, they were spot on. When you brew a cup of coffee you got the sound of steam and pressure that are common in a coffee shop, really adding that atmosphere. 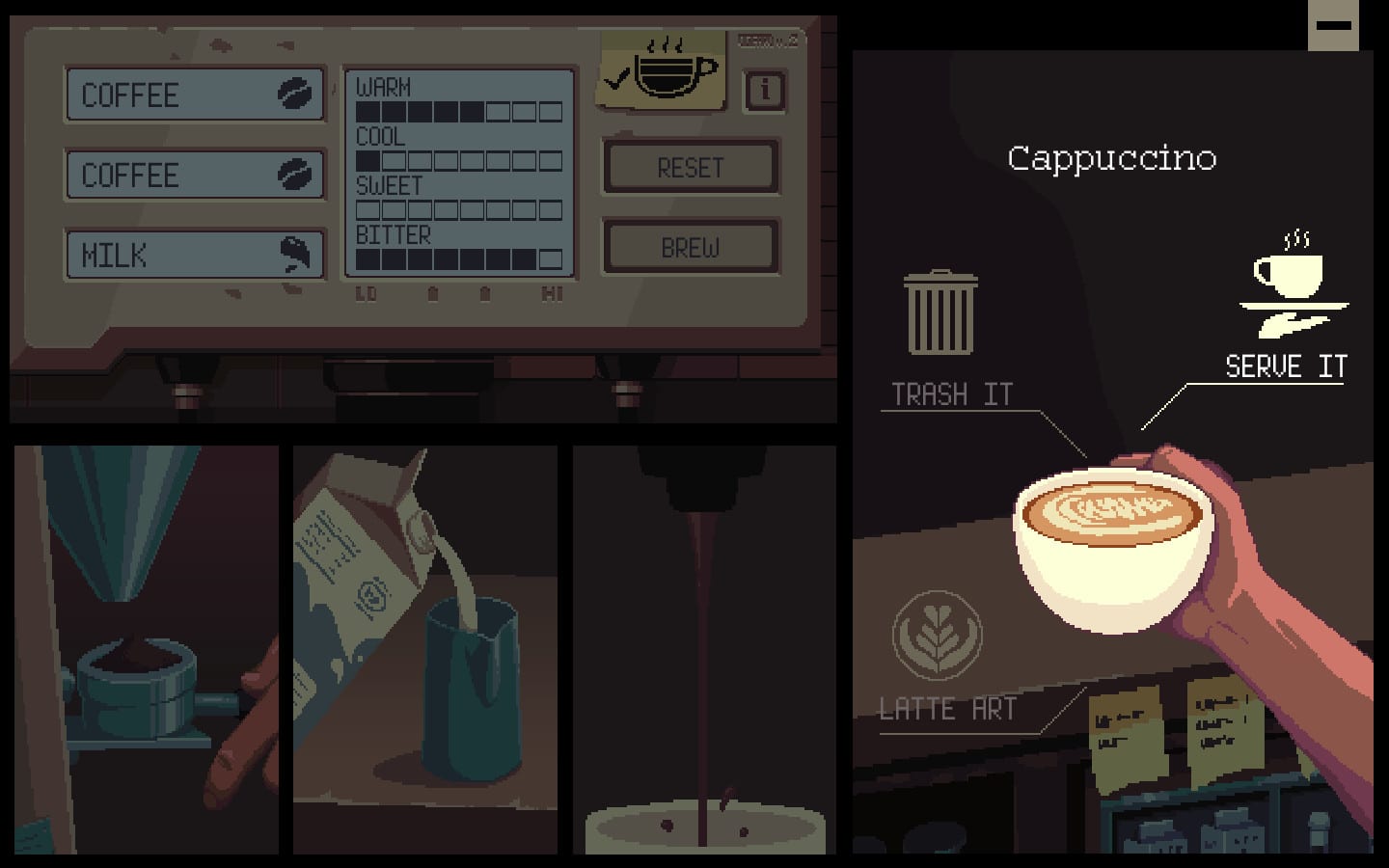 Your other apps were a barista guide aptly called The Brewpad, that showed different coffee and beverages. This list develops with you during the story as different characters ask you to make different drinks, from Espresso to Chai Lattes. If you forgot how to make something you can just check the app. Another app was the local newspaper; The Evening Whispers, providing stories that change with each new day. The final app is much like Facebook called Tomodachill, linking characters as they come into the coffee shop showing a bio with birthdates , general info etc.

The art style is a lovely pixel style, incredibly well detailed from the characters to the shop itself. Each character has been beautifully created and made uniquely with some characters easily recognisable as say an orc such as Myrtle in her lovely shades of green, while Hyde the vampire was incredibly pale. The coffee shop has characters silhouettes walking past the coffee shop and a nicely detailed background of coffee paraphernalia, adding that homely charm.

When you are asked to make a drink your customers may tell you exactly what is in it so when you go to your pantry you just select from the ingredients, simple enough. Other characters will test you and ask you to surprise them or offer only one or two ingredients leaving you to fill in the blanks. My only issue with this aspect of the game was even if you got the order wrong the characters just say that’s not what I ordered, you apologise, and they say that’s ok. There isn’t any real ramifications for making an error and this kind of bothered me. A cute idea they added was the Latte art mechanic, so if you made a drink with milk foam on it you could add some latte art on top. Again, no ramifications for doing a rubbish job but it was kind of fun trying to figure out how to make a picture out of foam like a legit barista would do. 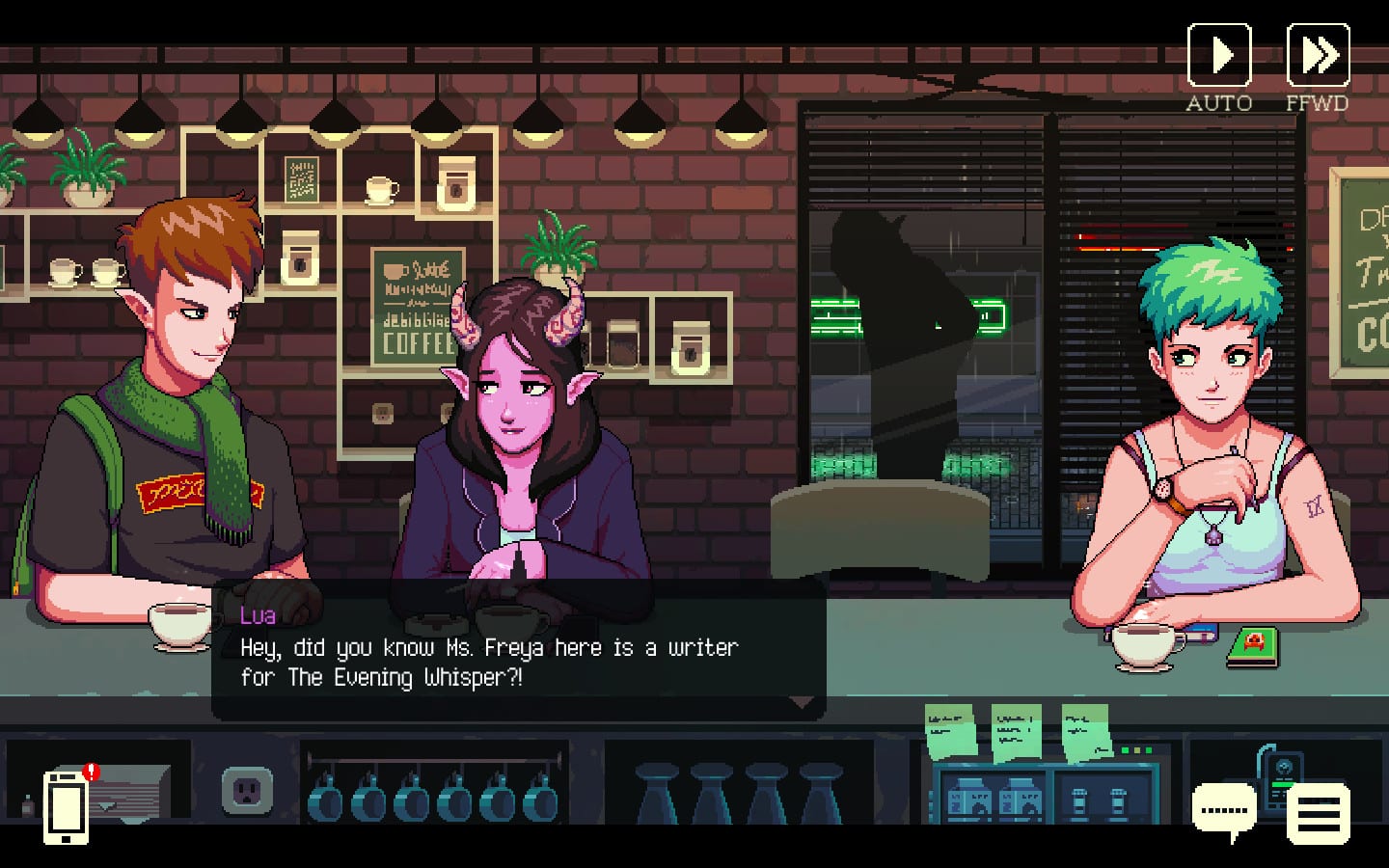 Story wise, some of the stories were a little weird with some discussions being very MA15+ in themes such as pornography, but a lot of the subject matter could be related to things many people go through. Toge Productions chose to address these themes through fantasy such as using an Elf and a Succubus as a way to tell a story of racism and how a family can create a lot of drama when they don’t approve of who you are dating, or a Werewolf veteran with PTSD and anger issues. A good masking of sensitive issues albeit not suitable for children.

I haven’t played a Talking Simulator like this before so I would have preferred to actually have speech bubble options and make the story move in a direction I could control, instead of just being an audience member who occasionally made coffee. In saying this, the game just works. I became intrigued by how the stories would go and I continued to test if I could keep making incorrect beverages!

If the story mode isn’t for you, you also have Endless Mode with two different applications, Free Brew, which involves you making whatever beverage you want and have your patron tell you it looks great again.. as if that doesn’t get annoying fast. Challenge Mode as the name suggests, gives you an order to make and you’re timed, with a happy face or sad face the indicator of your success depending on your effort.

Overall, a good game, but with its harsh themes and non consequential game play, this will not be a title enjoyed by everyone, and that’s ok. 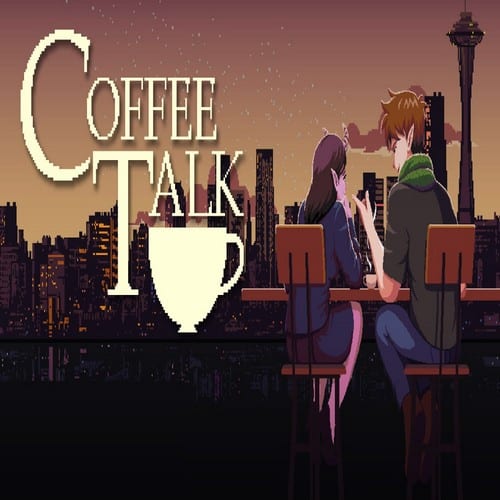 Coffee Talk is a coffee brewing and heart-to-heart talking simulator about listening to fantasy-inspired modern peoples’ problems, and helping them by serving up a warm drink or two.