It seems that finally the Nintendo Switch is gaining more games to its ever growing library of games as each week goes by, the latest is an older Steam/mobile game titled Crashlands.

So what’s the story of Crashlands? It’s a galactic adventure and you play as Flux Dabes, he’s the hero of the game. His normal job is a delivery driver and the package you have at the start of the game is interrupted by some douchebag alien and well from then on your time is spent fighting the bad guys, crafting items that’ll help you survive and you aren’t alone, your trusty sidekick “Juicebox” will lend a hand and keep you company.

This game isn’t new, it’s been on Steam ever since 2016, it’s even still available on iOS as well as Android devices and it’s time for the Nintendo Switch to join the club. It’s a game that truely suits the Switch, I favoured playing in handheld mode over docked just because of the style of the game, there wasn’t a need for a big screen. You can create a Bscotch ID that grants extras like leaderboards, unlockable perks and cloud saving, it’s free to sign up and worth the time to make an account.

Crashlands can be a game played alone or with a friend in couch co-op. The genre for Crashlands is a mix of RPG/Action Adventure. It’s both published and developed by Butterscotch Shenanigans, a company that was founded in 2012 and have made a number of mobile games aside from Crashlands.

Your time playing you’ll fine yourself exploring a vast area crafting tools and weapons, there is a day night cycle which gives a cool effect especially at night time. You’ll do many quests along the span of the game. There are a number of difficulties to play, easiest, well balanced than a medium-ish difficulty and hard.

Crafting is a must and the main factor of the game, without crafting you won’t get far from the start of the game. It almost felt like I was playing a much simpler version of Fallout, the way you go around gathering items to craft and build armour amount other things needed for survival.

When it comes to the overall size of the game it’s three large areas, there each called Bawg, Survannah and Tundra. Each of those three places have different looking enemies and other factors. Fighting is also something that’ll happen quite often the hardness of enemies will depend on the difficulty choice you went with prior to starting the game.

This isn’t a highly detailed game visually, and that’s fine with me because I totally like the cartoon style, the game does look better in handheld mode over docked but it’s still a good looking game in docked mode on the Nintendo Switch. The HUD shows things like the time of day, Flux’s health as well as other things like the map and quests.

It does come across as being a mobile game, but on the Switch that’s totally acceptable it’s also why I was super comfortable playing in handheld mode, however it’s a game that after a few plays had me a little bored though. 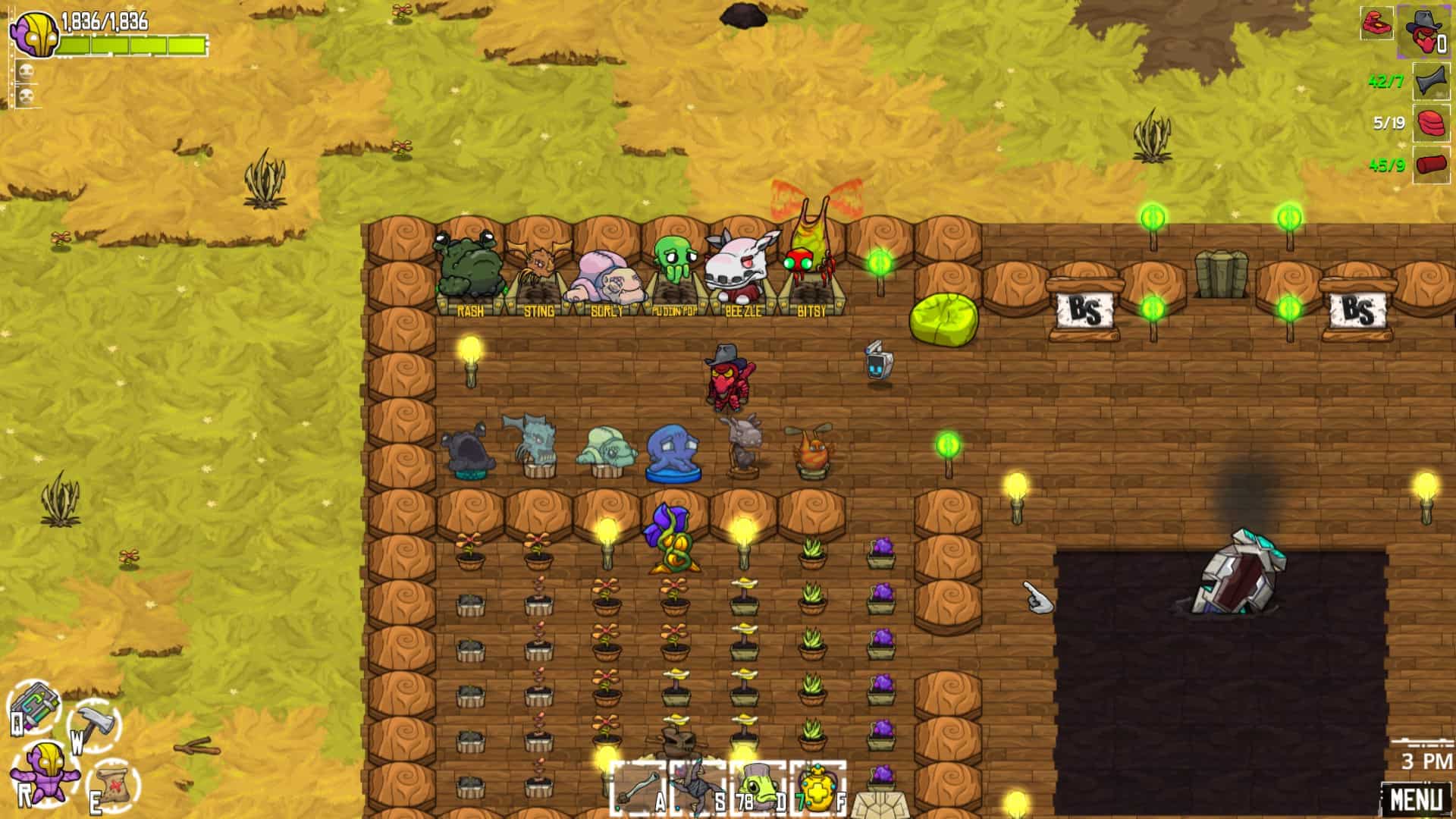 Crashlands is a story-driven crafting ARPG set in an outlandish world of hidden magic and high technology. Fight and tame alien beasts, craft resources into menacing weaponry, befriend the locals, and go toe-to-chin with a world-domineering maniac.