Escape From The Universe

In the year 104, of the Universal Galactic calendar, after the Earth’s destruction, human survivors are spread out across the universe, doing what they can to stay alive in the extreme harsh conditions of a war-torn galaxy. Players will take control piloting a spacecraft traveling through the universe in this top down, side scrolling shoot’em up, reminiscent of classic arcade games such as R-Type and Gradius.

On initially starting the game, the main menu might feel limited but it does get you straight into the game. The gameplay is very simple and easy to learn, yet still challenging with more difficult levels to unlock as players progress through. Moving around the screen will change the speed of the spacecraft. Left of the screen is the lowest speed and moving towards to right will speed up the spacecraft. Each level will have a variety of enemies to battle, obstacles to navigate around to prevent damage and most levels will have a boss at the end with certain conditions needed to defeat them. The speed changes can make it difficult to manoeuvre around safely, but also can work to your advantage especially in levels with a time limit. Even with only one button to shoot enemies, players will have to play strategically rather than just attack head on. Power ups are also available for regaining health, shield to absorb damage and slow down time which allows players to get ahead and eliminate more enemies on screen. The game also uses credits for either continuing from your last point on the level before dying or more importantly to upgrade your spacecraft. Credits are earned by completing levels, but still have a limited use. This encourages players to play smart and stay alive to save up their credits for upgrades, which will make the later levels easier to complete. The upgrade system is simple and easy to use, giving your spacecraft the stronger weapons and armor it needs. Missions are divided into Plot Quests which progresses the main story and Side Quests where players can earn extra credits before taking on the tougher levels. This also gives the game more replay ability.

The graphics may look bland at first, but works well with the game’s retro, sci-fi theme. The solid colours are simple and not as detailed as other games of its genre, (even games from the 80s era) but do a good job of helping players single out what to attack and what to avoid. Anything pink is destructible and anything green is invulnerable and best avoided. The different layers of colours makes it easy to distinguish between background and foreground, and the separate layers of stars moving across the screen helps illustrate the speed you’re travelling at. The simple, techno music also really fits the game’s aesthetics pleasantly enough. One major downside would be the story, which even though is a really interesting concept, it’s not presented as well as it could be. There are no real cut-scenes, just on screen text explaining the current events. It feels more like it’s getting in the way and slowing down the game’s flow than progressing it. Even simple still images illustrating the story would’ve made the story more uplifting and engaging, but players are more likely to skip through them quickly, realizing the story doesn’t really have any effect on the actual game.

Escape from the Universe is a simple, retro, arcade style shooter paying homage to the many classics of its genre. Even with the fairly average story-line, fans of those classics games will find plenty to enjoy and feel right at home in this indie game by CAT-astrophe Games.

Escape From The Universe 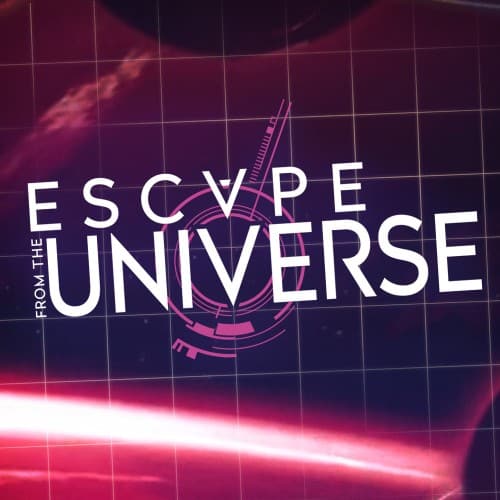 It’s year 104 of Universal Galactic Calendar; after the destruction of the Earth, human survivors are scattered all over the universe, trying to persevere in the hostile environment of the war-torn outer space.