One of the oldest sayings still about is “don’t judge a book by its cover,” and it has never been more prevalent than my experience with Greak: Memories of Azur. Developed by Navegante Entertainment and published by the legendary Team17, this visually alluring side scroller adventure game both kicked my ass and left me begging for more. Sprinkle in a pinch of RPG mechanics, slap on a bunch of puzzles to conquer, and that cute little book cover now holds a substantial work of art behind it.

Once upon a time, having a hand-drawn art style was groundbreaking. To be able to accurately portray a picture come to life was unique. Nowadays, it is much more common and it has forced Navegante to think outside the box to bring back that unique feeling. Opting for a sketch style aesthetic, with a minimalist approach to character detail, it allowed the colourful clothes to pop against the plague-ridden sepia tones of the world rotting away behind you. Their faces are nothing more than two dots for eyes but through carefully placed shading and character movements, I was able to experience more emotions from body language alone than some games can deliver through dialogue.

It was a clever way to disarm the player into letting their guard down. I convinced myself this would be a pleasant walk in the park. I don’t normally like comparing games directly to other games, but I probably should have learned from Hollow Knight and Ori that a cute-looking game can be tough as nails. However, it wasn’t due to a particularly difficult combat regime. While varied, it was not a steep learning curve. It was the sudden realisation that I would eventually have to control Greak and his two siblings, Raydel and Adara at the same time with one controller, using shared inputs. To say I didn’t break a nervous sweat during some of these encounters involving a literal handful of micro managements would be a lie. 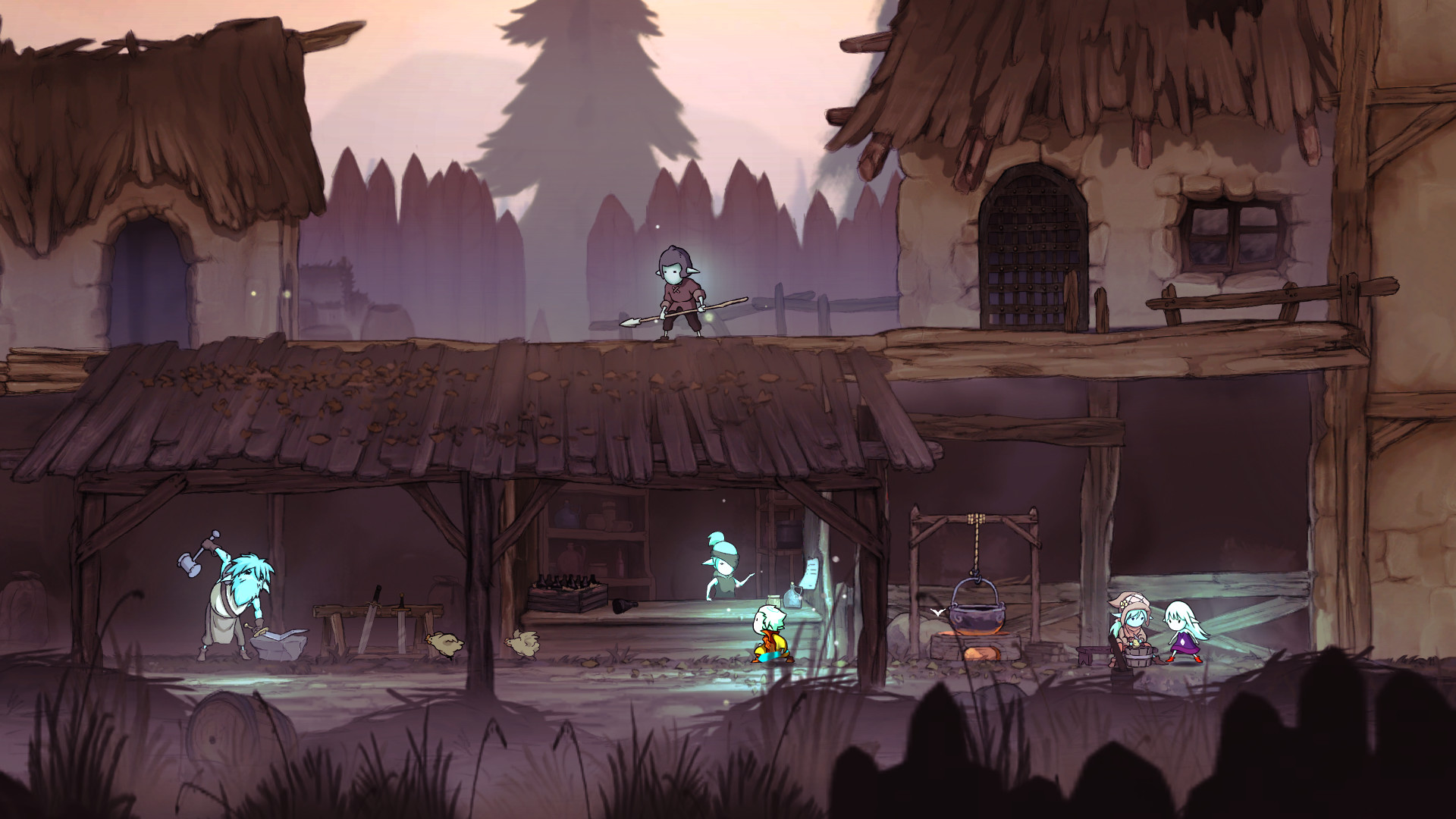 To be fair, it sounds more daunting on paper than in practice, but it was definitely a mental exercise in itself. There is only one button for your standard attack which means it is more about timing than trying to punch in a combo of different attacks. Being able to dodge emphasizes the timing aspect of combat as you run circles around enemies whittling them down. A layer of complexity is added by having to manage and switch between the three characters with the D-pad to utilise their different abilities and keep them from certain death.

Greak is a short agile swordsman with a double jump who can use basic slash attacks and a crossbow for ranged attacks that require bolts for ammo. Adara is a magic wielder with an intrinsic ranged attack and a floating jump. The last character you unlock is your bigger brother, Raydel, who is a more cumbersome version of Greak, but boasts a hefty shield and grappling hook to traverse the land in a way the other two can’t.

It was a challenge at first to keep everyone together and alive as you can either control one character at a time or hold the left trigger while next to them for you to control the entire party. They will follow your direction and jump at the same time as you do, keep in mind each character has a different jump ability so there were multiple times I had to let go of the left trigger and re-gather everyone to sync up properly. Sometimes it was easier for me to control one at a time to get through a particularly finicky platformer section, but other times you are forced to manage everyone at once. They will defend themselves if left alone but nowhere near enough to survive without a player interference, and if one member of the party dies, you all do. 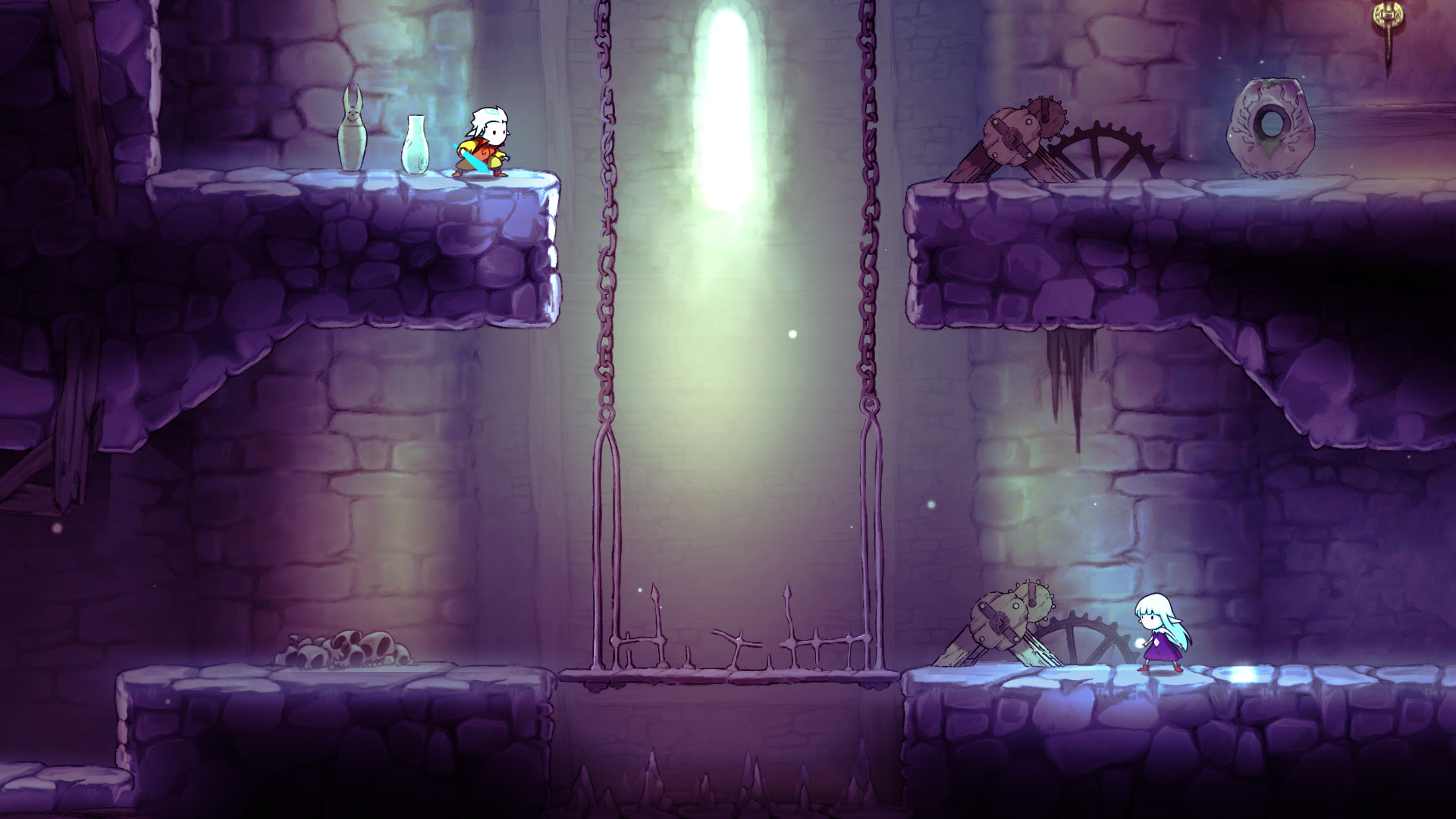 It wasn’t immediately apparent, but having grown accustomed to games holding your hand and not trying to rock the boat, Greak: Memories of Azur was a refreshing take. Traversing the decaying lands of Azur and helping out the remaining Courine people fend off the evolving threat of the Urlags was palatable to the world-building. If anything, it did a solid job in giving me a reason to keep going even after reuniting with my lost siblings, in hopes of repairing the mighty airship to leave the wasted lands of Azur.

A lot of aspects of the game were geared towards letting you experience the lands of Azur without interruption. Melodies would follow you through the brighter areas and slowly wind down to an unsettling silence as your footsteps echo off the cave walls. Other than an overworld map there was little to guide you through the increasingly intricate areas and more complex puzzles. Yes, that can be a deterrent in some cases, but I felt that it was a deliberate game design choice for a more reminiscent element to games of old. I had to scratch my head and experiment a bit with some of the puzzles too, might I add, having to throw everything but the kitchen sink at it and use all three characters was deeply satisfying once it clicked into place. The fast travel and save system could have done with a little tweak as I felt they could be agonisingly far apart sometimes causing a frustrating backtrack when one of my characters died.

While not being the longest time investment, clocking in at around 10 hours of direct gameplay, not including curious exploration, the time spent in the lands of Azur was memorable enough to warrant an extra play through to see how different the experience was, given what I know now. I could definitely do with more of the pre-rendered cutscenes, which if they decided to elaborate on, would be a worthy contention against the likes of Studio Ghibli. 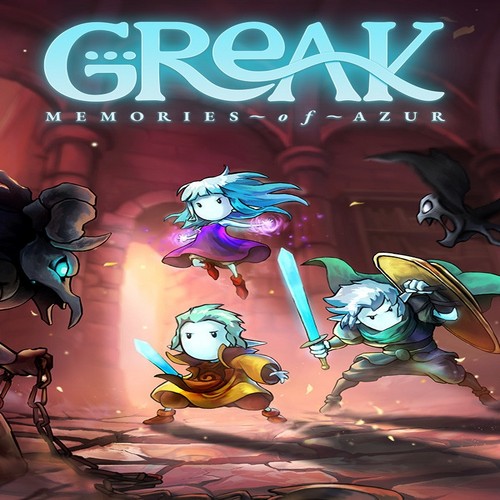 Greak: Memories of Azur is a beautiful single-player puzzle platformer adventure. You will take the role of three siblings: Greak, Adara and Raydel to guide them through the lands of Azur.