Hello Neighbor has been around for a while now but recently released on Xbox One. Back in 2015 Dynamic Pixels Kickstarter campaign fell short of its goal, but that didn’t stop Dynamic Pixels. Over the past two years or so, they’ve released several Alpha and Beta builds which have attracted a lot of attention via Youtube and Twitch streamers.

Hello Neighbor is split into three acts, and set over the span of several years. The game begins with the simple instructions of investigating your neighbour’s house across the street, but you don’t know what for exactly. After hearing some strange sounds coming from within your neighbors house, which all seems very unusually concerning, your goal is to snoop around and figure out what is going on over there.

So what kind of game is Hello Neighbor? It’s essentially a stealth game with randomly generated environmental elements along with your AI neighbor whose behaviour and location can be manipulated by certain triggers. Your main task is to get inside and unlock a conspicuously well-secured door. But first you must located the key to said door by overcoming a few obstacles. An example of these triggers and obstacles are being able to shut down the power to his house using the breaker switch on the exterior wall which will have your neighbor go outside to investigate. This will give you the opportunity to climb in through an open window and sneak past a security camera which you’ve just cut the power to. Dynamic Pixels boast their game’s “Advanced AI” but there are some tips I can give you to help you out. Want him to stay away from a certain room? Just let him catch you a few times in say, the bedroom or kitchen. He’ll then start to focus around those rooms for a while before giving up and going back to his normal routine.

Anything you’ve picked up, moved or put in place before you’re caught will still be there when you spawn back into the game, so don’t worry about having anything reset after being caught. You can typically get back to wherever you were last doing within seconds, there’s no punishment for being captured. Something Hello Neighbor does really well with the online community is generate online discussion. There are forums all over the internet with people banding together trading secrets and solving puzzles. It’s a good sight to see and I myself got involved to find out what I could about the backstory of Hello Neighbor.

Now, while I’ve been happily playing through and sneaking around Hello Neighbor for several hours, you can smash through the game in around an hour or less once you know what you need to do. But it is Hello Neighbor worth your hard earned $40? That will depend how you plan on playing it. Explore and take your time trying to understand what the hell is going on in your neighbor’s house, then yes. Though, if you plan on rushing through the game using online walkthroughs, then not at all. 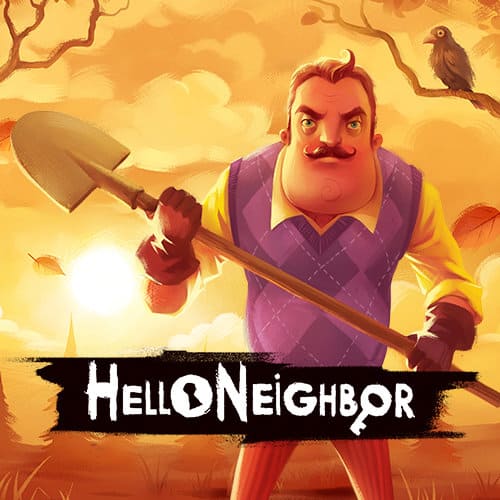 Hello Neighbor is a stealth-horror game about breaking into your neighbors house. Play against an advanced AI that learns from your actions, and counters them. Find out what horrible secrets your neighbor is hiding inside his basement.