This is a collection that gives you not only one Hitman game but two, Blood Money and Absolution. These are only playable on PS4 and Xbox One, and only in digital format. Blood Money is a whole 13 years old and as for Absolution, it’s 8 years it’s junior. This collection was also kept top secret until it’s announcement in early 2019.

Hitman as a franchise has 9 games under its belt, and this is the second title Warner Bros has published. Across all games you always play as one character and he’s iconic in the gaming world and isn’t someone to bring home to mum either.

His name is Agent 47, he’s 6” something, has a bald head and eyes that could pierce your soul, and killing doesn’t bother him as it’s his job.

Blood Money doesn’t really have a story that drives the game into anything else other than making you feel as though you’re going from one place to another and just killing targets and moving on. This is actually one reason why I’m not that fond of it, but Absolution has a story and it drives you from start to finish, and does connect with Blood Money as it takes place after those events. All Hitman titles have always been heavily based on stealth gameplay, Absolution on the other hand let that go a little allowing you to run and gun to some extent. Both games require stealth and both have a good game plan depending what your route will be to successfully complete your missions. Stealth isn’t the only difference between the two, health is your enemy in Blood Money because if you get sprang and you’re shot up enough you’ll die and you’ll need to restart your mission. Absolution instead gives you the opportunity to use medicine cabinets around some areas, these stand out and are bright green, there isn’t many but enough that if your health is low they’ll help you out.

Hitman as a franchise is known to be difficult to play, but people who thrive on stealth probably play these games with there eyes closed, but if either are too easy or too difficult they have a number of difficulties to play on.
You can’t just play Hitman, you need to think like one too. Both these games require you to blend in by changing outfits or fooling others around you to think you belong there. Timing is also something to be wary of, you don’t want to spook someone causing bullets go flying. You can kill, or subdue people whatever it takes to complete your mission. You’ll also need to hide those bodies inside cupboards and boxes. Weapon choices also matter, you don’t want to go into a building shooting an unsuppressed assault rifle, it will draw attention and it’s the negative kind. Weapons you can use can be anything from assault rifles, pistols, knifes wrenches and more. The iconic Silverballers were my personal favourites when I had them. Fans will notice fairly quickly when starting up Absolution that something’s missing, that being the Contracts mode, it’s missing due to licensing issues. As for the controls I thought Absolution won that by miles, they just worked. Aiming to kill was done with ease, Blood Money really made me work for that perfect shot even though controls were apparently adjusted.

Now, I’m at the part where I’m rambling on about visuals and performance, so strap yourself in. Prior to launch it was thrown in our faces on twitter and reddit that this was 4K 60fps. This is somewhat true, both run a solid 60FPS but the whole 4K isn’t what you may think. I don’t want to over complicate readers with resolutions so i’ll just touch on this lightly. The PS4 Pro on a 4KTV outputs 1440p but upscales to 4K. On the Xbox One X, on a 4KTV it outputs at 1800p upscaling to 4K, so it’s not native 4K. On a standard Xbox One’s it’s 1080p and on a base PS4 it runs at 1296p, even on a 1080p screen. Strange I know and this is coming from IO Interactive A/S themselves. The UI for both games is a native 4K, and the HUD for Blood Money has changed but unless you’ve already played it you wont pick up on it. Cut scenes are untouched, meaning they are left in there default resolutions. I played this on a PS4 Pro and on a 4KTV and it’s pretty impressive. I own the 360 version of Blood Money and I compared that to the new version and holy crap. The overall enhancements are higher resolutions, they both run at 60fps instead of 30fps. Textures have also being upgraded, shadows and lighting, super sampling, controls have all been touched up too.

This was a last minute announcement in January 2019, just a couple of weeks before it was available to buy. I was pretty sure with my knowledge that this wouldn’t be a cheap game, and I was right, pricing is $85 on PS4 and $91 on Xbox One. Yes, it’s pricey for such old games but they are enhanced after all. It’ll just depend on how much of a fan of the franchise you are and if you’re willing to drop that much on this collection.

I played both extensively and I wasn’t disappointed with the games. Absolution stands out more in my opinion but Warner Bros. Interactive Entertainment and IO Interactive A/S have pulled off a decent enhanced collection. 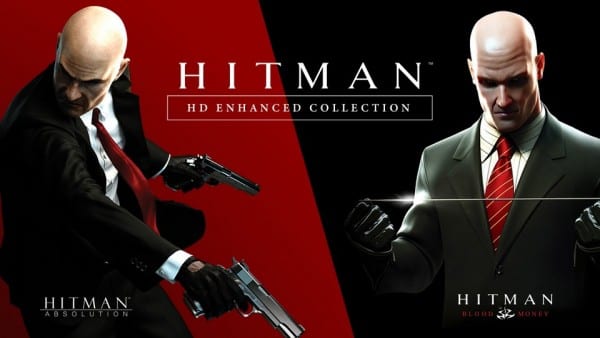