One of Nintendo’s biggest franchises, The Legend of Zelda, is back with its latest entry as Hyrule Warriors: Age of Calamity. Published by Nintendo, who created the game all the way back in 1986 and Koei Tecmo with development by Omega Force, who is best known for Dynasty Warriors, the game that created the game genre known as “Mousu”. Mousu is actually a Japanese term for 1 vs 1000, meaning players will take control of one or a small team of characters to take down large armies of enemies. The Mousu style of game has also been used with other popular franchises including Samurai Warriors, Warriors Orochi, One Piece, Gundam and Fire Emblem.

Age of Calamity is actually a successor to Hyrule Warriors released on the Wii U back in 2014 which also uses the Mousu gameplay style. This Zelda game is also a prequel set 100 years before the events of the highly praised ‘The Legend of Zelda: Breath of the Wild’ released on Wii U and Switch back in 2018. This latest entry tells the story of the Great Calamity, a great war that was alluded to in Breath of the Wild between Hyrule and Calamity Ganon, that lead to the fall of the kingdom. The overall story is surprisingly really well done for a spinoff game and sets things up nicely for Breath of the Wild.

Players will first take control of Link, as various other characters from the Zelda series become available for the 1 or 2 player hack and slash action. Each playable character has their own unique moves and abilities to aid each other in battle. 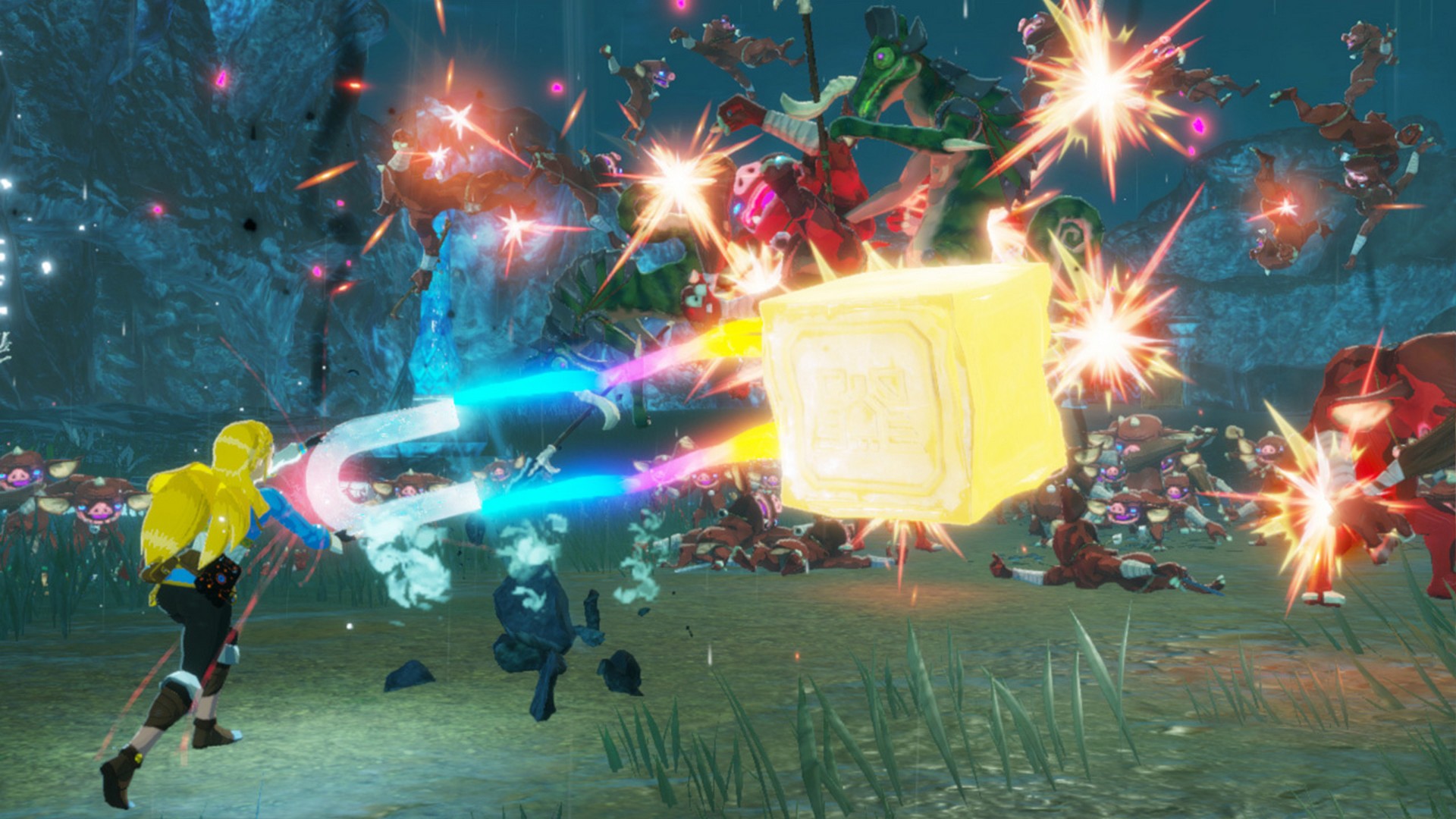 Beginning the game, players will be put right into the action with helpful tutorials along the way, as they must take down what seem like overwhelming odds, with large hordes of enemies charging towards you. This creates the feeling of being in a real medieval war, making for a thrilling experience. Fighting enemies in Age of Calamity is definitely a different experience when comparing this to Breath of the Wild, were fighting a single enemy early on in the game can be a real challenging task. This does make Link feel weaker in comparison; however, he was asleep for 100 years between the two games.

The battles are fast-paced, exciting, and very satisfying seeing large groups of enemies as they’re taken down by the heroes. Being able to perform long combos feels incredibly rewarding and being able to easily cancel out of those combos before a nearby enemy takes advantage of the situation, is definitely helpful to get the upper hand in battle. Upgrades become available to each character as the game progresses, which will be essential to take on the bigger threats later in the game. Certain missions actually allow players to operate the Divine Beasts seen in Breath of the Wild and is definitely something that makes this Zelda game stand out from the rest.

The boss battles are very intense and exhilarating with each having their conditions in taking them down. They become more and more challenging, but aren’t completely unfair and feel incredibly rewarding after successfully conquering them after a hard, long-fought, epic battle. 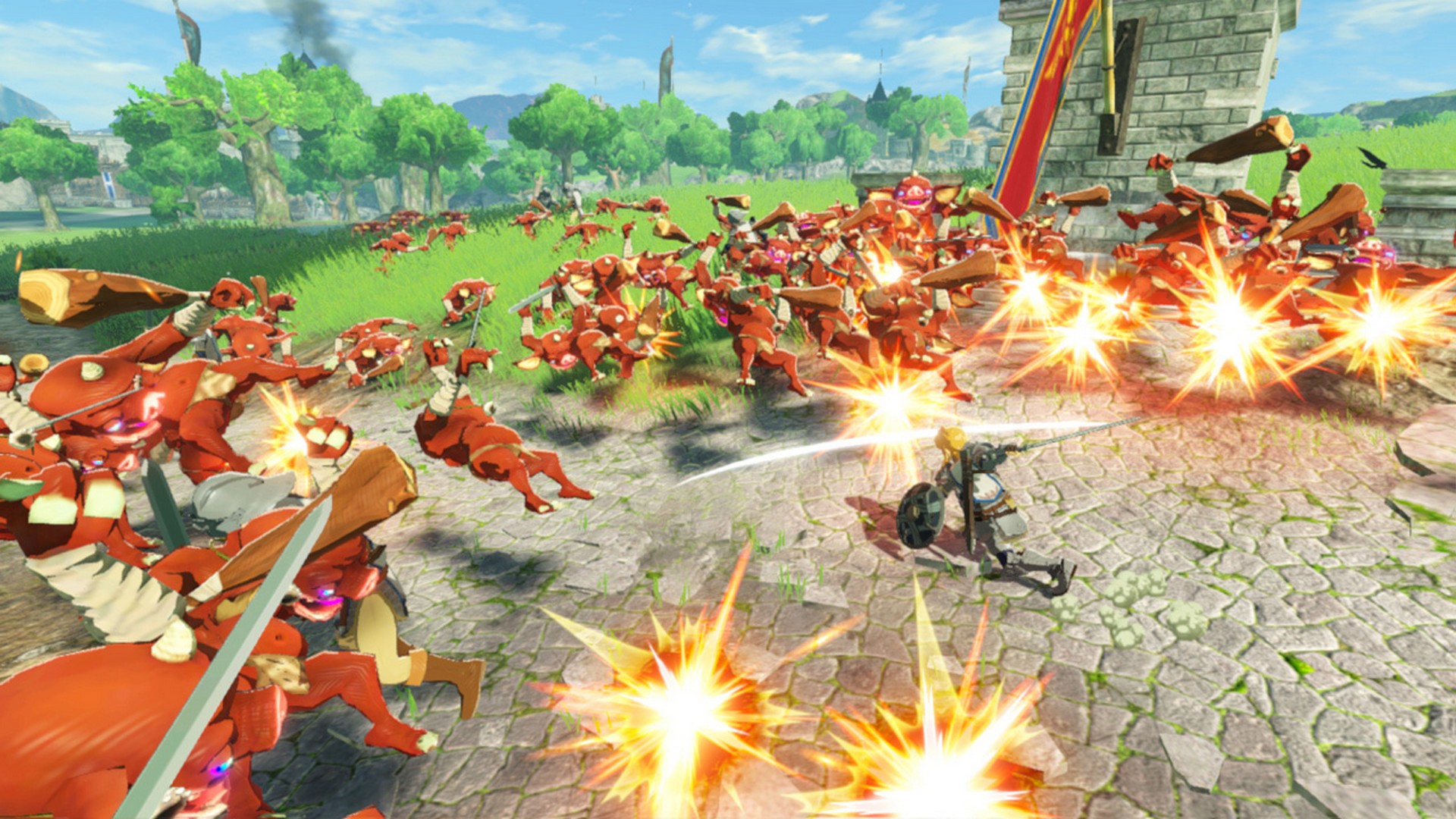 2 player mode is available almost any time in the game for double the fun. Having an extra player really does help with difficult tasks, but it does make the overall game feel a little too easy, which some may see as a negative, however, this isn’t a big issue and doesn’t have a huge effect on the game’s fun factor. One or both players can switch between any of the available characters during the missions at any time. One big downside is that there is no online multiplayer available, which is a real shame, especially with the ongoing world crisis.

The first Hyrule Warriors game also didn’t have online multiplayer, so it’s a wonder why its successor doesn’t have it included.

The game uses the same cel-shaded graphics as seen in Breath of the Wild, bringing back its bright, vibrant and colourful art style. When 100’s of enemies appear on the screen at once, the framerate does drop slightly which is one of the limitations of the Switch hardware however this seems to become less noticeable the more you play and doesn’t hinder the experience too much. The animation is fluid and does a fantastic job illustrating the battles, character abilities and effects. The slow-motion moments add just that little extra impact to the experience.

The game looks just as good in docked and handheld mode, though, in handheld mode, there was some confusion with how it’s supposed to work. There was a prompt from the console that the Joy-Cons had to be detached before proceeding with the game, which meant the screen had to be sat down on a surface. This defeats the purpose of it being a handheld game, making it really inconvenient to play on the go but re-inserting the Joy-Cons back into the Switch after taking them out allowed it to be played handheld without any issues. Other players may not have had this issue, but it was a confusing experience and hopefully will be patched in an update or rectified for future games. 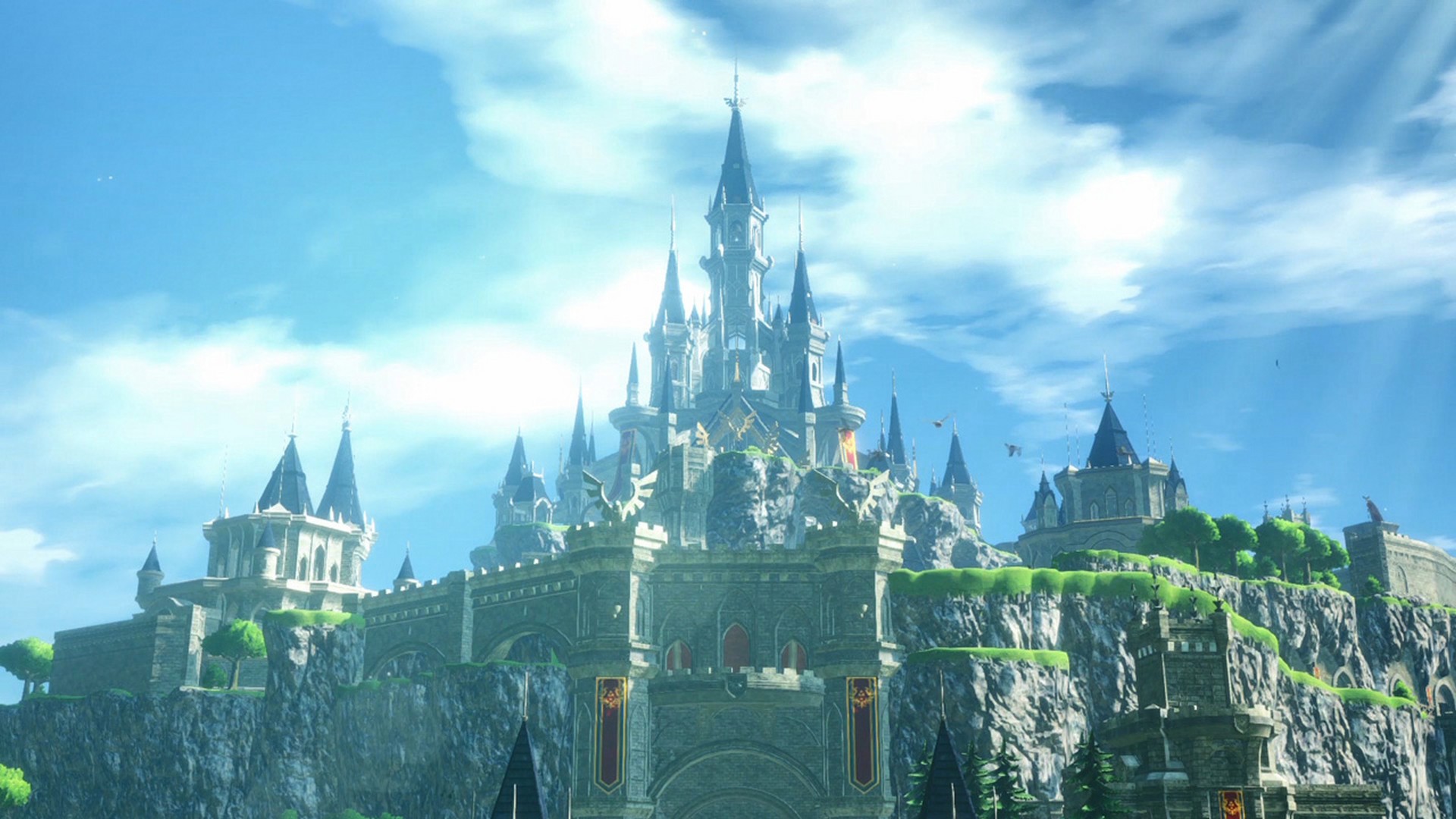 The Zelda games didn’t have any voice acting (not including the CD-I version) and were very text-heavy for their dialogue scenes until they finally decided to implement it in Breath of the Wild. The English dub doesn’t quite seem to fit for some characters, for example, Zelda’s voice (performed by Patricia Summersett who reprises her role from Breath of the Wild) doesn’t feel like it suits her, as it sounds more like a very modern British accent than something that would suit the time period of the Legend of Zelda games. The voice feels like it would better suit an older sister of Zelda. While it’s not the worst voice acting around, the game could definitely do with a lot of improvement though there is an option to change the voice audio to Japanese and even other languages. Players may prefer the Japanese dub with English subtitles as is the case with watching animes. The music, however, has that classic medieval Zelda feel and really compliments the gameplay.

The UI during gameplay is very well positioned, spaced out, and doesn’t feel intrusive to the player. It will help keep track of your character’s health and special meter. The map in the corner of the screen definitely helps direct players to their next goal and destination on the large battlefield.

Hyrule Warriors: Age of Calamity is definitely a unique and thrilling experience. Playing for long periods may feel repetitive for some and there may not be any dungeons to explore or hidden treasures to discover, but fans of the franchise will definitely enjoy this Dynasty Warriors style game with various characters from The Legend of Zelda. 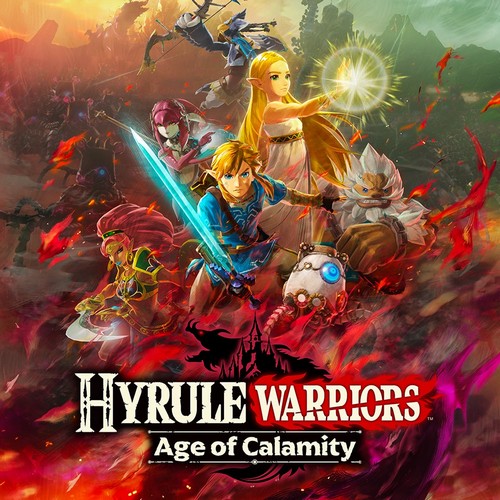 Join the struggle that brought Hyrule to its knees. Learn more about Zelda, the four Champions, the King of Hyrule and more through dramatic cutscenes as they try to save the kingdom from Calamity. The Hyrule Warriors: Age of Calamity game is the only way to see firsthand what happened 100 years ago.