Here I am, back again with another review, this time with Ice Age: Scrat’s Nutty Adventure. Based on the Ice Age’s movie character Scrat, the often unlucky saber-toothed squirrel now has an adventure in his own video game by Just Add Water studios and Outright Games. Now, often movie games don’t transfer well into the game universe but Just Add Water have done Scrat justice, read on and find out more.

Starting off my nutty adventure in typical Scrat fashion, opens with him chasing and struggling with a nut. In typical Scrat luck, it ends up in a hollowed tree trunk falling right through into an ancient temple. I was intrigued straight away, I soon discovered through on-screen text that my prized acorn has been accepted as tribute and is now locked inside an ancient Scratazon Temple, just my luck. Playing as this furry little fool, the only way to get it back is by making my way through the map, one section at a time, while finding and collecting the legendary crystal nuts (yes, I am that immature, giggling whenever I found one) at the end of each level. Along the way there’s also hidden statues, as well as missing relics, collecting these bestows Scrat with a new and special ability, the first being a very helpful double jump. I came across a decent selection on enemies along my progression and using Scrat’s Jackie Chan style moves coupled with my amazing rock throwing skills, make sure even those pesk flying enemies cop it too. 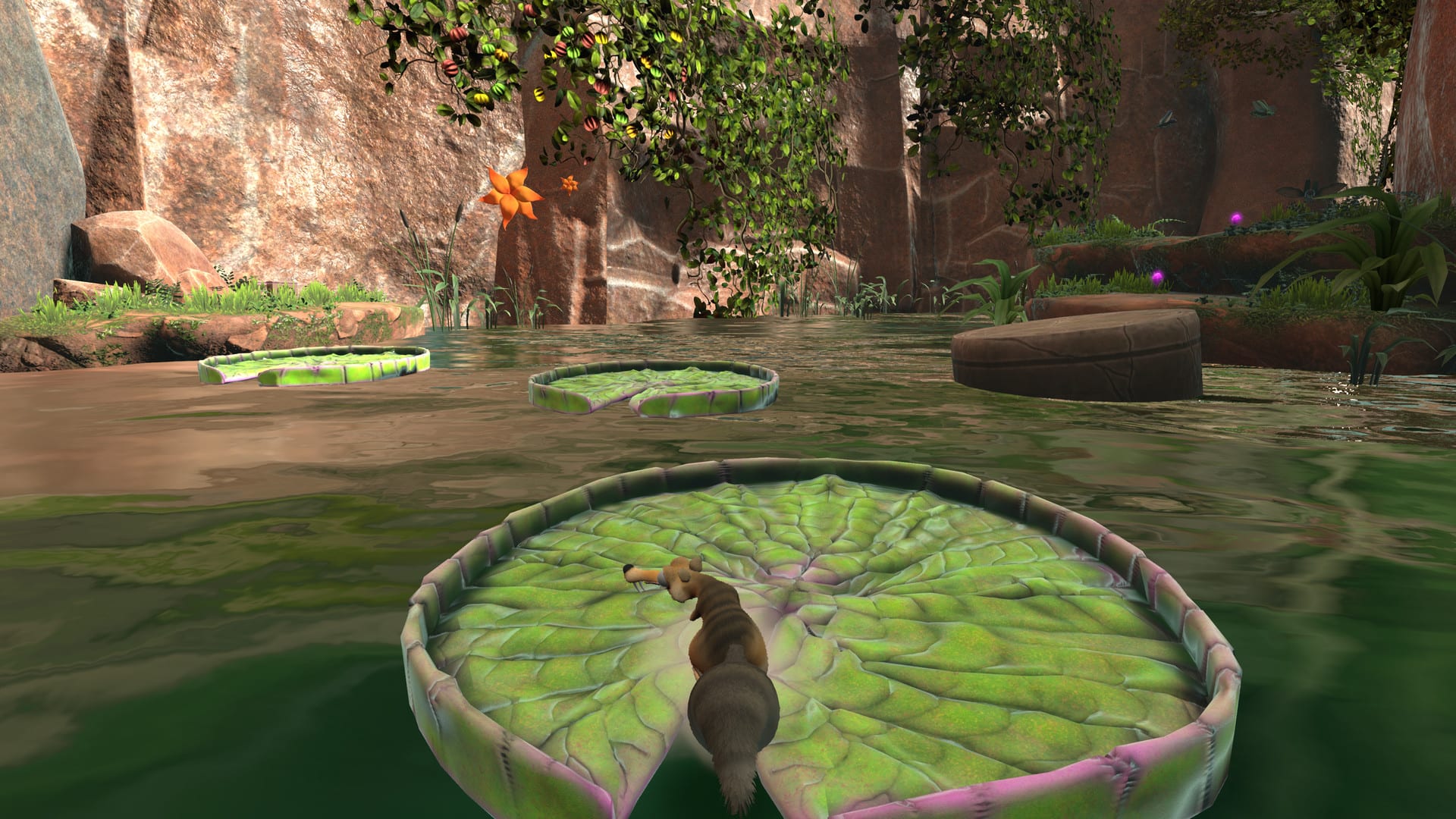 Playing is very reminiscent of the likes of Crash Bandicoot or Spyro and being a fan of those types of games means Scrat’s charm immediately started to rub off on me. You are required to collected diamonds via smashing boxes and beating up enemies. You can also ‘boing’ up the sides of cliffs and plant your butt in geysers to be shot upward into the sky. Every minute was highly enjoyable and yes, as most people know I can be highly immature, so whenever there was a wall jump section of jumping back and forth up, that adorable little noise from the wall jumped make me giggle hilariously.

The controls are incredibly easy that even my six-year-old son could pick it up within seconds of grabbing the controller. He may not have done too well with. Utilising basic moves such as (LT) Aim, (RT) Throw, (LB) Sneak, (RB) Dodge Joystick movement, (X) Attack, (A) Jump/Accept and (Y) Interact. My point is, its really that simple.

The only thing I didn’t really like was the camera angles. Wrestling the controls of it usually meant moving around to weird angles, to the point I couldn’t see where the enemies were. An enemy lock-on button would also had been handy. Just minor annoyances. 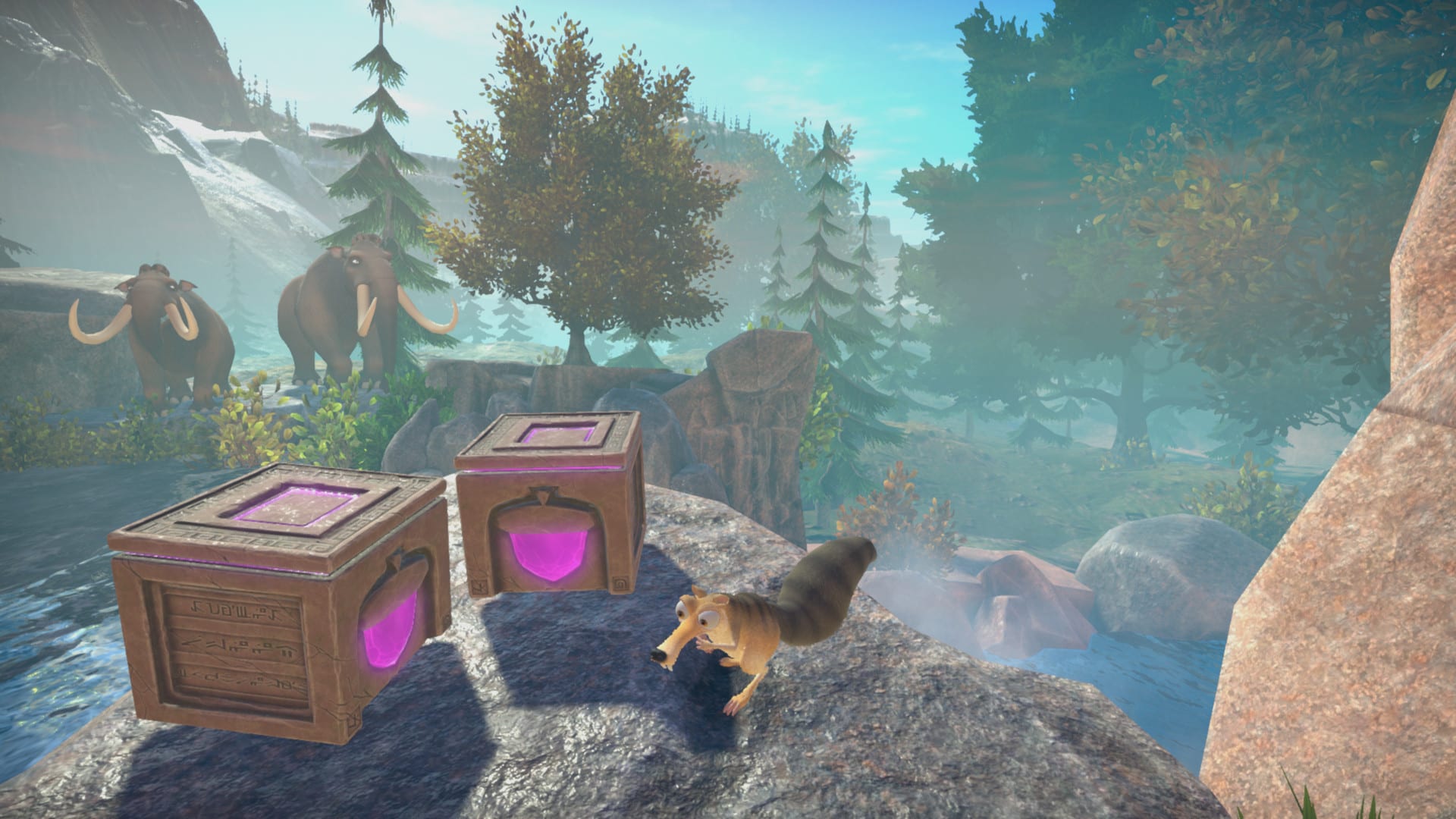 The game looks great on the Xbox One S. Each location looks crisp and clear. Scrat and all the enemies are bursting with detail to surprisingly, with even my son pointing out that across the river Manny the Mastodon and his wife were in the background which I found to be a brilliant idea. It was a nice little nod, that if my son didn’t point out I’d have simply overlooked. The music was also very whimsical and not repetitive. The tempo does change however when I entered my first boss fight, letting me know it was about to go down as I took on two rhino characters I’ve seen in the movie.

I highly enjoyed my time playing this, despite it appearing like a child’s title, it was a game I definitely could bond with my kid’s over. The laughter and the fun was priceless in itself. Now in saying that, it may be easy for children but it doesn’t mean adults won’t enjoy it or find it easy. Searching for statues and relic pieces was entertaining enough. Definitely a good family title, perfect for Christmas. Peace. 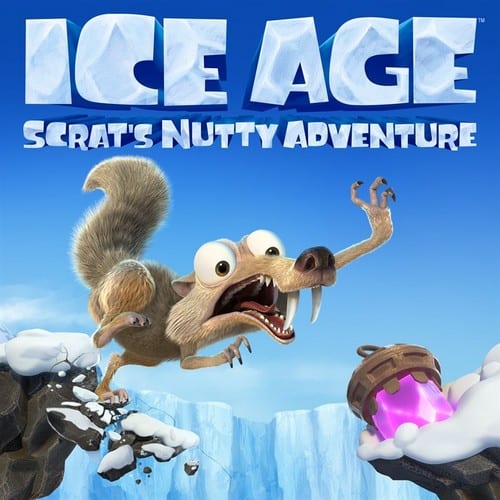 Scrat’s on a brand new quest! Sabre-tooth squirrel Scrat is on a nutty quest! His prized possession is locked inside an ancient Scratazon Temple – and the only way to get it back is to retrieve four legendary Crystal Nuts, scattered across the land.