Let’s be real for a quick second: Video games based on movies very rarely pay off. When the loves of ET, Jurassic Park & Back to the Future all bomb out as gaming titles, there’s little wonder why this stigma is still around today. So, when E3 dropped the knowledge of a new video game based on the epic John Wick franchise was being made, the gaming community across the globe shut their eyes and tightly crossed their fingers, praying for a sign of hope.

John Wick must be one of the best trilogies in cinematic movie history. Their action sequences will perplex you, whilst the storyline will engulf you. So much so that you’ll inevitably drum up the thought of ‘Man, it’d be so cool to be John Wick!’ Well, Good Shepherd Entertainment has heard your thoughts and are proudly presenting to you: John Wick Hex!

(MOVIE SPOILER WARNING: IF YOU HAVE NOT SEEN THE JOHN WICK MOVIES, POSSIBLE CHARACTERS / STORY PLOT LINES MAY BE REVEALED)

John Wick Hex is a top-down view tactical game, designed to put you into the mind and therefore lead the choices & actions of John Wick. You play as John Wick, a contract killer with an impressive reputation as a legendary hitman. Set before the events of the first movie, John is hunting down a man named Hex. Charon & Winston reprise their roles, seemingly allying with Hex

you absolutely must jump in and play as Mr. Wick 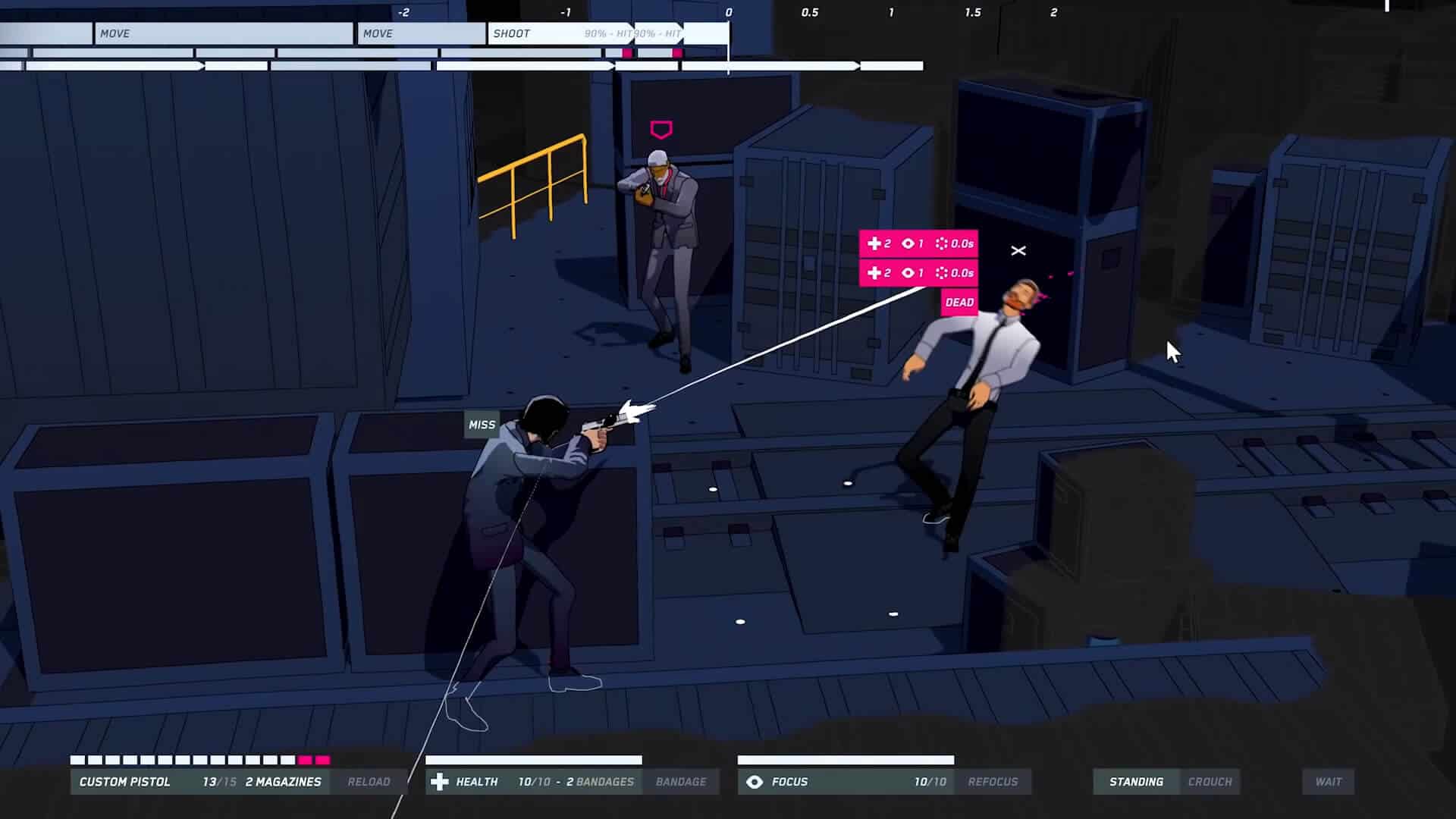 In-game, each battlefield/scenario presented before you have different paths and objectives, with the main goal being to get to the end of the map. You can make as much, or as little, noise/killings as you want, so long as you reach your end goal.

The map has little hexagon shapes to which you can choose to move to. Some moves are limited to 3-4 spaces. When John (you) encounters an enemy, time freezes and a variety of options appear at the bottom of the screen. This can range from a move to crouch, roll, etc. However, selecting an enemy provides an array of different options: attacks. These can range from punching, pushing, shooting, throwing your gun, etc. Each attack costs focus, with each ‘shoot’ action costing ammo.

Your health plays a vital role too, no health is normally a game over. To lengthen the life of Mr. Wick, ‘bandages’ sometimes appear on the map. To collect them, simply hex-a-walk your way on over and collect them. Using them to heal will be considered an action, so it’s advisable not to heal in front of an enemy who is aiming a gun at you.

It should be noted that each action you choose has a varied amount of time required to complete the action. For example, shooting may take between 1.2 and 1.8 seconds. The enemy you’re targeting will also reveal their choice of action, and through a steady process of time-based mathematics: if your action takes longer than the enemies, you’re going to get hit! So, make sure you tally up your time, focus and health before proceeding with your choice of target elimination. 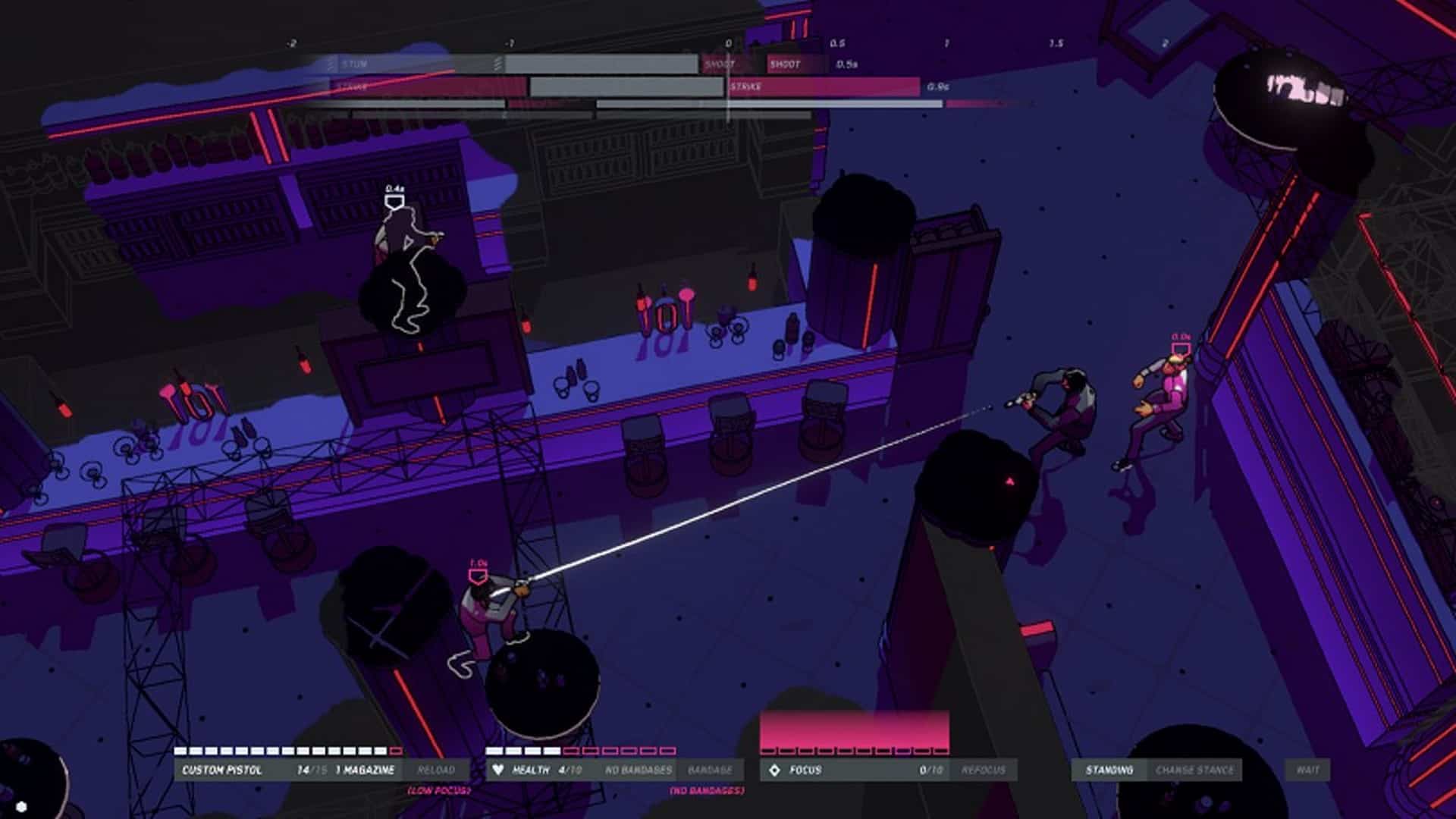 John Wick Hex has very simplistic controls, the majority of which are reserved for the mouse: click to move, scroll and click to choose an action, etc. The keyboard showcases the usual WASD keys to use for exploring the map.

The art styling of John Wick Hex is kind of strange. It’s a mix of cell shading, like that of Borderlands fame, but it also shares a similar comic book-esque feel. Not that anything is wrong with that, it just is very different to look at. After a few minutes of in-game play, the art tends to blend in with the action, therefore it’s not as noticeable as when first sighted. The levels are drawn and detailed in their own unique way, giving the same grunge-noir feel that was portrayed in the movies.

The sound is immaculate in recreating the audio soundtrack of the franchise. It’s dark, ominous blade-runner inspired music with the onscreen cutscenes and ramp up the intensity during the in-game tactical choices. A real treat and the devil in the detail bonus point is having the voice actors from the film reprise their roles. Too many movie-based games have the actor/actress likeness but use a terrible knock off voice to try and save face. Thankfully, John Wick stands on its own in movie-based gaming, right at the peak!

John Wick Hex is a lovely complementary tactical shooter game, set as a prequel to the films. If you’re a fan of the franchise, then you absolutely must jump in and play as Mr. Wick as he sets the tone for his upcoming tales. The art direction is beautifully unique, and the soundtrack keeps your audio senses engaged, and you’ll find yourself humming the music long after you’ve turned off the game. 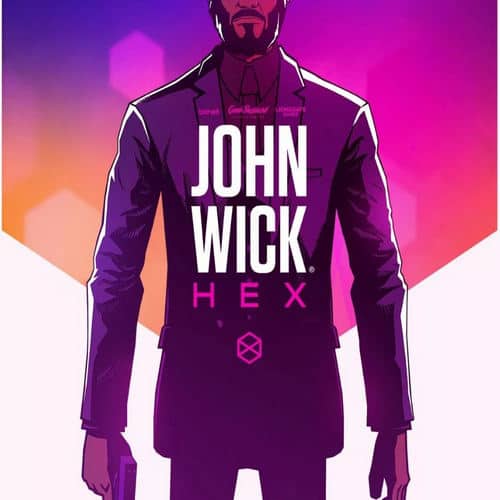