By Christopher Hubac on December 2, 2020 on Reviews, 8 More
close [x]
Tweet
No Comments

King of Seas’ is a charming little look into an up and coming cross-platform game developed by 3D clouds. The game so far is simply a preview, but from what’s on display, it has remarkable presentation and polish. I’ve barely started and already I have high hopes for this game. Let’s see what the rest of the preview has to offer.

Starting the game you are treated to a nicely animated scroll with a voice-over explaining the game’s scenario. It lingers a bit longer than I’d prefer, normally I’d rather the story is shown through gameplay but I think this works well for this particular game. It fits the theme well and it is very well made. The final shot of the scroll shows each segment of the story as one big collage which fits together very nicely. After the story exposition, you are left off where the optional tutorial would have ended, with whichever protagonist you chose being saved after a mutiny occurred on their former ship.

The game sees the player take control of one of two shipwrights, Marylou and Luky. Neither choice affects the game in any way, as these characters simply act as the player’s avatar. They are the child of the king who has recently been found murdered, and after being accused of the one who did the deed, they are cast out only to be saved by Captain D Morgan and Leeroy. Not too far in and these characters ooze charm. Their beautifully drawn text accompanying images are rendered with a lovely watercolor look that I truly adore. Each character looks like they could have originated from a Roald Dahl book, or, at least another quirky kids book you’d likely find from a scholastic book fair. 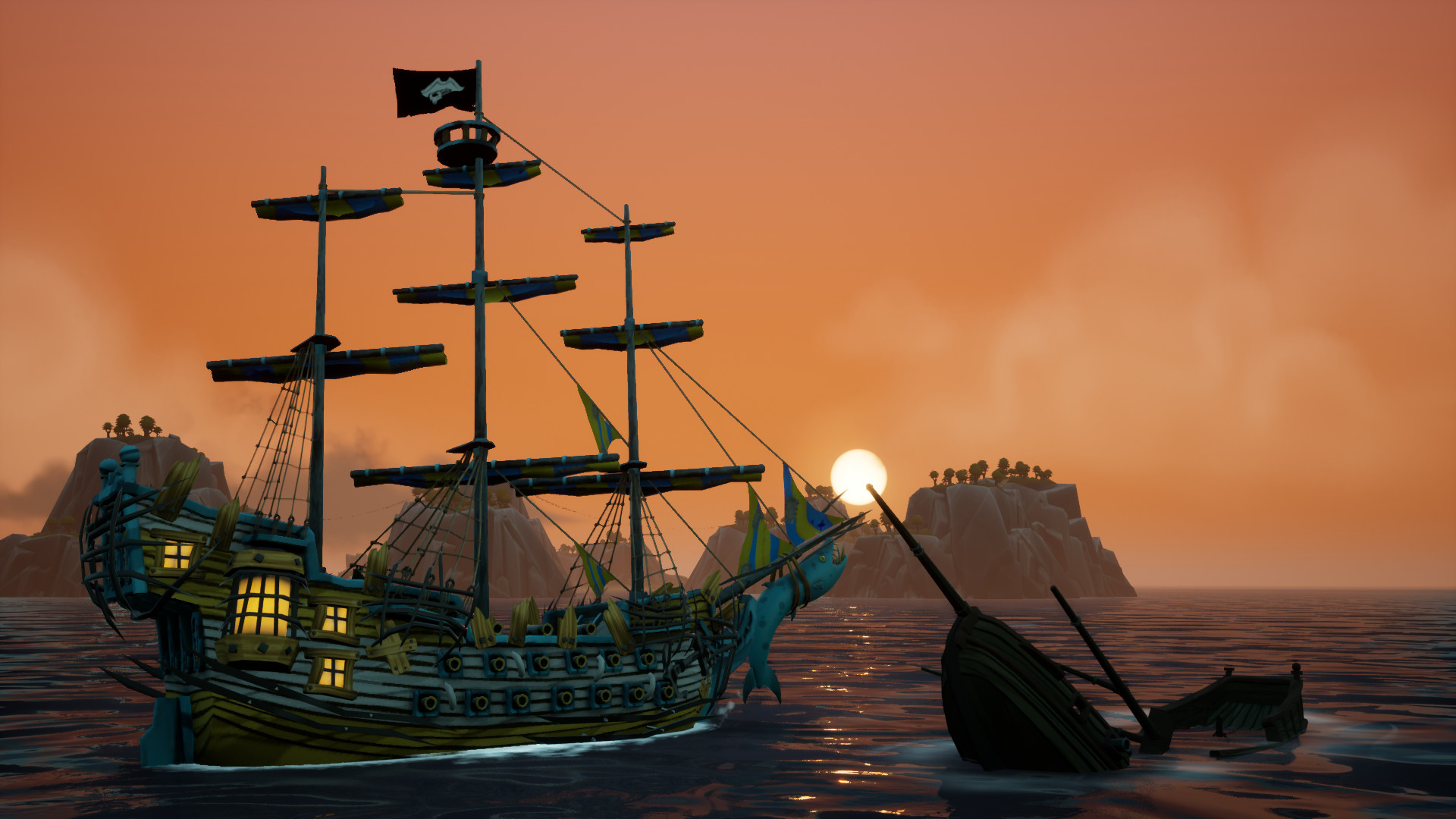 The gameplay of King of Seas consists of sailing and firing. The hud suggests a wider range of motions, however, we have only just started out. You control the speed of your ship by raising and dropping sails, which allows for some very fun maneuvering through the oceans and around obstacles. The boat has four sail levels, none, 1, 2, and 3, with each subsequent level gaining speed, but at the loss of control. This isn’t a problem because shifting between sail levels is very responsive and precise, allowing for the aforementioned quick turns on lower levels out of a fully speeding escape, to be very easy.

Of course, moving at different speeds isn’t the only thing your ship can do. Players can shoot cannonballs out the sides of their ship using either left or right arrows. This is a lot of fun to pull off, as players must judge on the fly where the cannonballs are going to hit for maximum damage. With the enemy ship and your ship moving at different speeds, and both ships only being able to damage one another from the side, positioning is key in this game. The cannonballs also spread out after firing, so that’s another factor to consider when attacking. You do not run out of basic cannonballs, but each side has a cooldown for your crew to reload the canons. There is much more to upgrade about one’s ship, but that is to come later.

Wind direction also factors into how your ship controls and responds to the direction it is facing. Much like our own ocean, the sea is littered with debris and treasures that are able to be picked up by sailing into them. They can be castaways that replenish health by becoming crew, experience points, or explosive barrels that must be avoided. 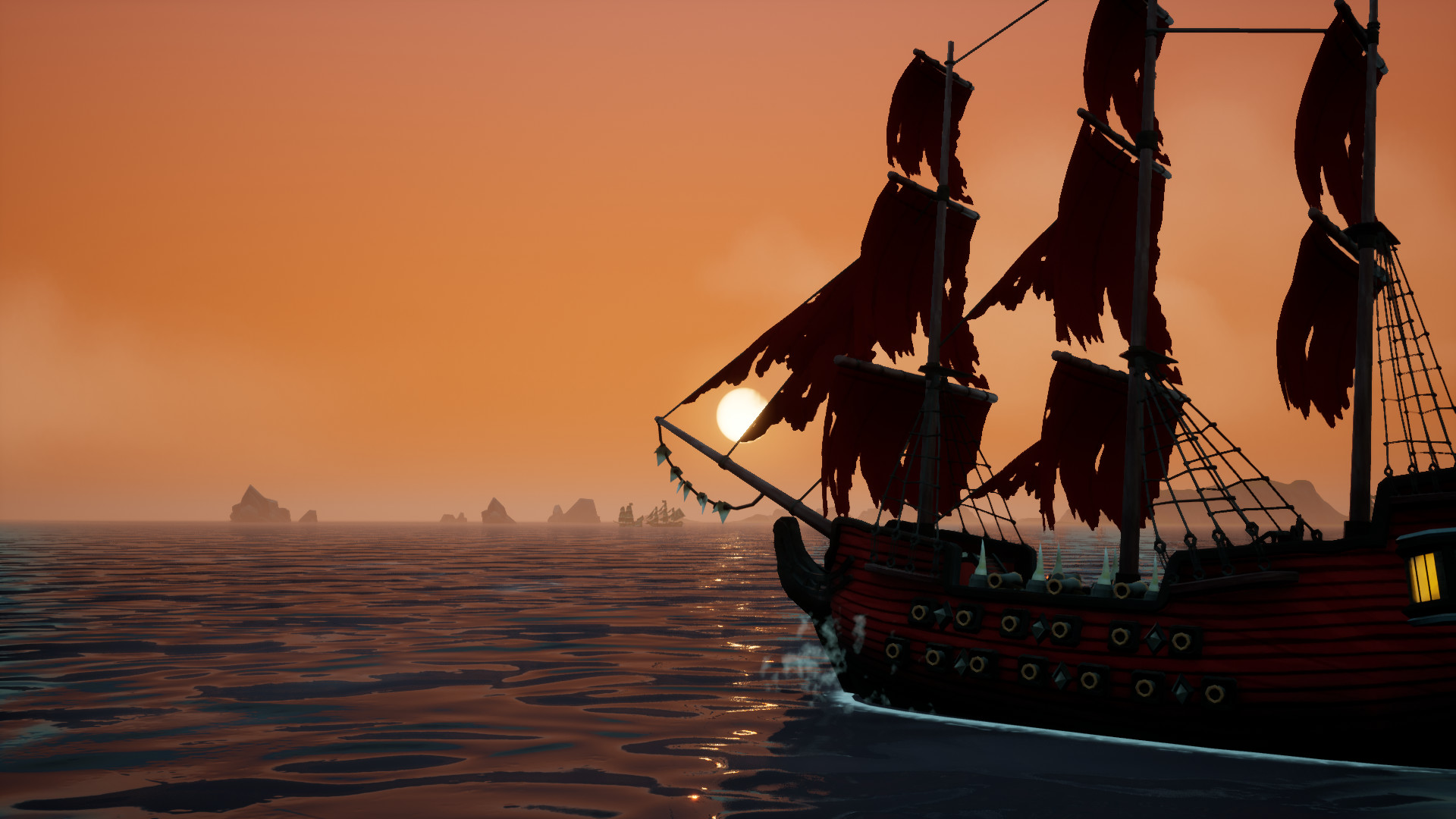 After a short tango with an enemy ship, you are to start on a quest for delivering wood. Players land in Eagle’s Den, a seaside village, that has lots to offer. In Eagle’s Den, there are even more fun characters to discover, however one is a bit of an oddity. The Bonobo’s Beast Bank is run by, well, a Bonobodo, or at least, a very monkey looking fellow. So far nothing else in the game has been as outlandish as a talking animal, but it doesn’t seem out of place in the slightest. That’s the magic of a solid art style and good writing. Even a bizarre idea such as this can fit in fine if executed correctly. I will speed through the other sights the town has to offer.

This game’s art style is very pleasing to the eye and blends incredibly well with the music to create a nostalgic sort of feeling. When playing I feel like I’m games of the early days of the internet like Runescape, but of course with much greater graphical finesse.

The music of this game is very pleasing. An older style, that invokes sea travel and a time before modern technology. It is calming and nostalgic and fits the game world perfectly. Each track is catchy and potentially memorable, however, so far nothing has truly stuck with me yet. Each track is accompanied by the rolling waves as they crash to shore, which compliments each song nicely. Sometimes the music would get going only to peter out before anything actually happened. It honestly was a little disappointing to set sail with a triumphant tune, only for it to stop before it even gets going.

Overall, King of Seas was a very fine experience, and I look forward to the full game, which, based on my experience here, I will highly recommend. 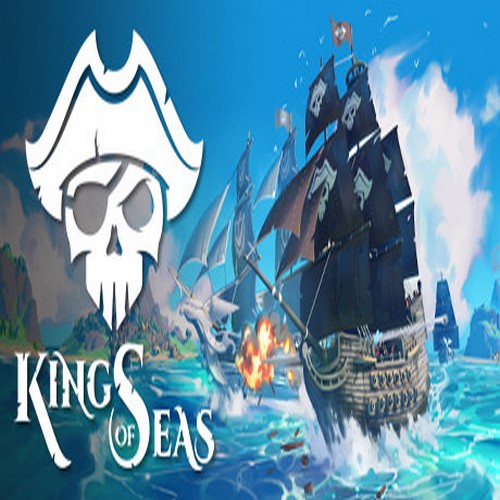 King of Seas is an Action Role playing game set in a procedural pirate world. An epic adventure awaits you in a fantastic world, dotted with fights, lost islands and treasures. A universe that will keep you anchored as you struggle to become the king of all pirates.