Kirby And The Forgotten Land 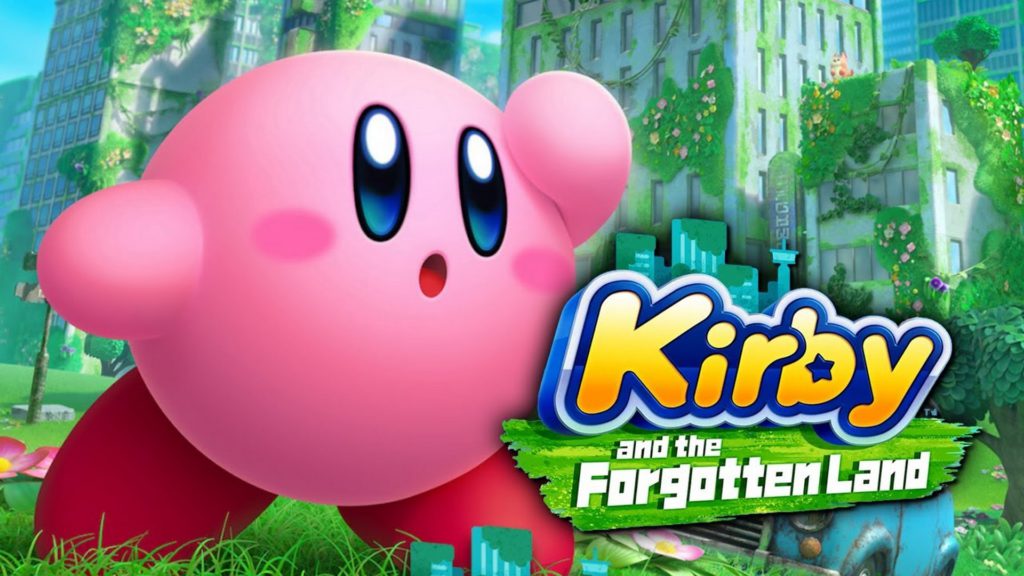 The very first Nintendo game I ever played was Kirby’s dreamland, and it absolutely blows my mind that this little puffball is turning 30. HAL Laboratory have marked this special occasion with Kirby’s most ambitious adventure yet, ‘Kirby and the Forgotten Land.’ It is here, that we get to experience a wonderful 3D world. Launching exclusively on the Nintendo Switch, this action platformer title highlights Nintendo’s legendary sense of imagination and creativity that have made them the household name they are today.

Considering Mario made the leap into the 3D world almost 20 years ago, to universal praise, I am surprised it has taken this long for Kirby to make the same leap. As I mentioned earlier, Kirby is breaking away from the side-scrolling gameplay he is famous for, allowing him to explore his world in new and exciting ways. There is, however, a small caveat to how much freedom you get. The level design is closer to the linear ‘Mario 3D world’ game as opposed to the larger spaces found in ‘Mario 64’. In saying that, having a structured level to follow from point A to B with numerous hidden paths, secrets, and events to be found in each stage, was hardly anything to scoff at either.

The opening cutscene sees our hero desperately chasing a host of friendly Waddle Dees as they are abruptly torn away from Dreamland through an inter-dimensional rift. Waking up in a foreign landscape of a civilisation not unlike our own; with modern building structures, cars, and machinery. The exception, however, is that these lands are slowly being taken back by nature, and are inhabited by wild beasts. I could watch an entire movie based on the art style in the story cutscenes, the voice acting was absent, but the musical themes and expressive animations were more than enough on their own.

I do think it is safe to say that Kirby is by far one of the most unique characters in the Nintendo ecosystem. With an adorable demeanour, the pint-sized pink ball can absorb and copy the abilities of many foes and turn their powers right back around on them. These copy abilities have always been a staple in his repertoire and have never been more engaging than they are here. 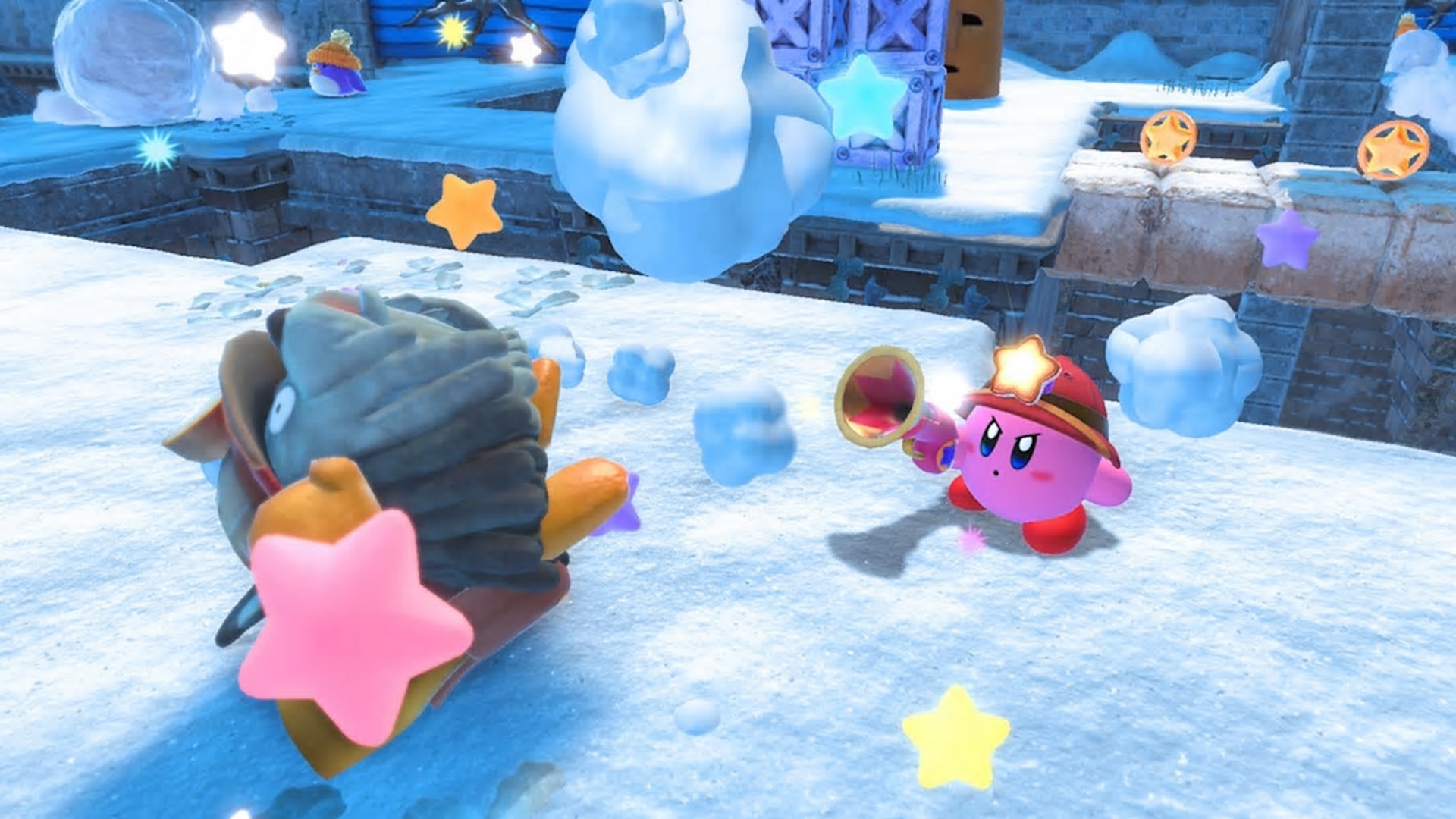 The opening levels see the tried-and-true nature of Kirby inhaling the little dumpling-sized enemies and harnessing their powers to bust out his own sword, throw some bombs or use the power of a tornado.

The wonderful addition to this game when compared to previous titles, is that you can upgrade each copied power. There is significant value in replaying levels you have already completed as well, either to beat your high score or find specific areas that required a certain copied power you previously did not have. There will be optional ‘treasure road’ levels that offer time trial events with a dedicated objective that rewards you with upgrade materials for your copied abilities. We get to see the old formula get shaken up even further in the form of the new ‘mouth mode’ which enables Kirby to take over certain inanimate objects.

While it does seem innocent enough, seeing Kirby inhale a car and stretch his form to fit snuggly over the top of it, was both adorable and slightly disturbing. Once I had adjusted, it was all laughs from there as I puttered around the level, smashing into breakable walls. My experience only grew more vicarious from here. A set of stairs can also be consumed after which, has you waddle around and flip onto enemies, or brace against a wall to climb into a hidden location. Every item that was part of the ‘mouth mode’ added a significant function, contributed to puzzle-solving or was simply good fun to use.

An intuitive control scheme is the driving force to keeping such a well-balanced experience intact. This is especially true when you could be changing power-ups and move sets multiple times in one mission.

The ‘B’ button inhales an enemy and once inhaled, it then lets you use the same button to perform the action of the copied power. If you want to switch out, just hold ‘Y’ and you will spit it out and return to being regular Kirby. No matter if you are in normal mode, or currently have a power-up, holding any trigger or bumper button blocks, and a flick of the thumbstick lets you dodge. I think it’s a little too powerful as it can tank a hit from any boss or slow time with a perfect dodge.

Each location has a running theme that will be constant throughout the stages contained in that area. The first area is a grassy wilderness on the edge of civilisation that has seen vibrant growths cover the buildings around me, while crystal clear water can be seen taking up some of the real estate at ground level. Snowy tundras exposed chunks of ice strewn about the landscape, while puffs of frozen air could be seen emanating from the game characters. 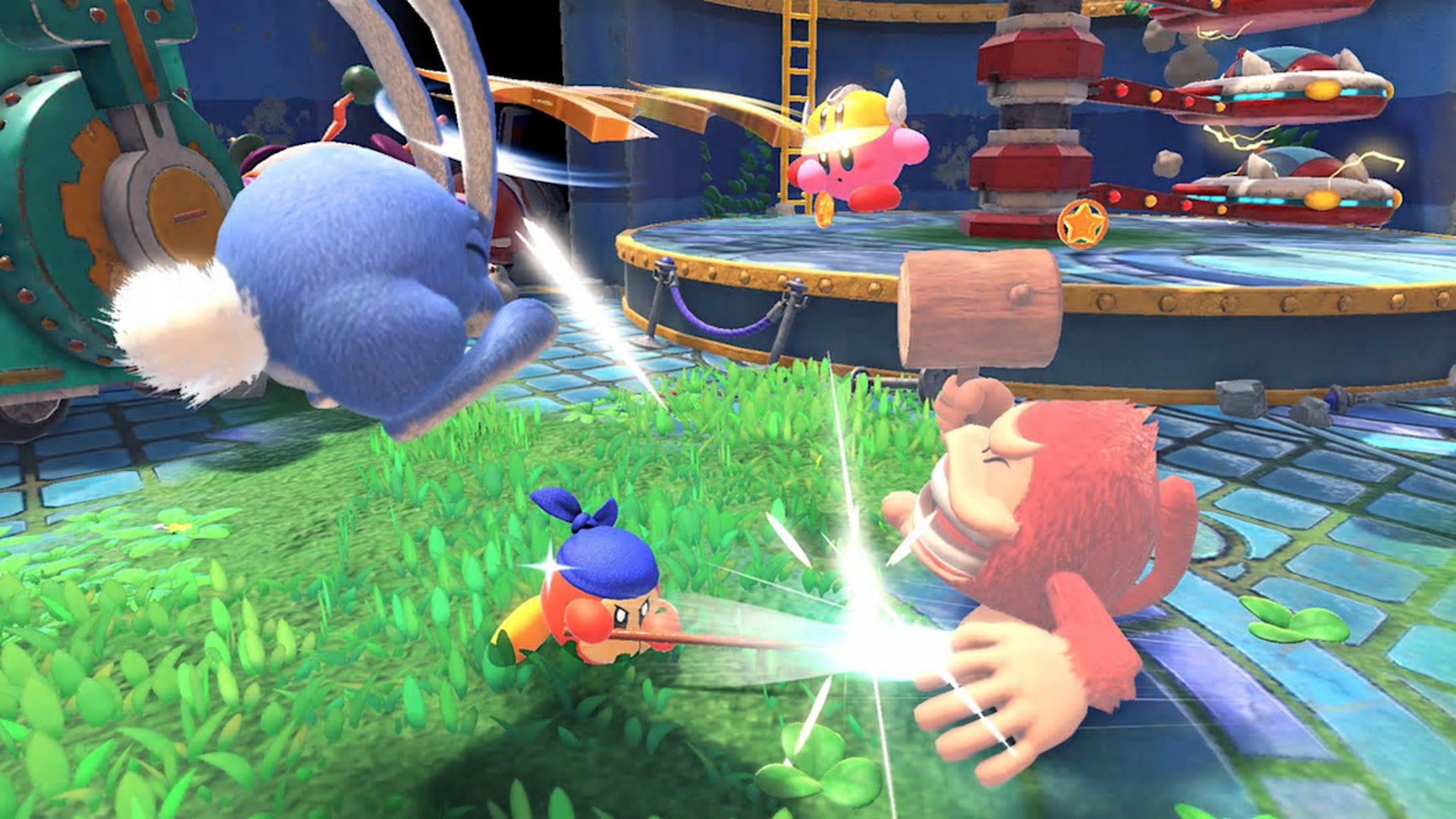 In general, it is a beautiful-looking game in either handheld or docked mode. The draw distance is not the greatest, and objects in the distance seems to stutter a little, but the fixed camera work generally kept you focused on the action right in front of you. It was rarely an issue that I focused on for too long.

I enjoyed revisiting the previously conquered areas, as each stage has 5 objectives per location that all lead to saving more Waddle Dees. It could be as simple as find tulips, or it required me to cut down a traffic cone atop a ledge for me to consume, which gave me the ability to use the slam feature to break a water pipe and find more hidden Waddle Dees.

My home base of operations would slowly open up with new shops, mini-games, and even Boss colosseums as I save more and more friends. It helped to unlock new locations also. It was an enjoyable loop that was always rewarding.

While Kirby and the Forgotten Land was not overly challenging, even on the harder of the two difficulty settings, it is nice to know that there is a ‘drop-in/drop-out’ co-op option for some added help when needed. One of the toughest Waddle Dees is able to be controlled by player 2, but they are rather hindered compared to the multitalented Kirby. It was still a welcome option, but I feel it is more tailored towards someone that isn’t as confident in their gaming abilities and just wanted to be included in the fun.

Kirby’s new adventure is a home run of epic proportions! It is more than just a successful entry into the long-running franchise, it is also a fantastic addition to the Nintendo Switch gaming catalogue in general. Kirby and the Forgotten Land is yet another reminder that Nintendo can continue to be a consistent powerhouse, despite the limitations of the Switch console. The dream is built on the powerful exclusives and Kirby is officially back in business!

Kirby And The Forgotten Land 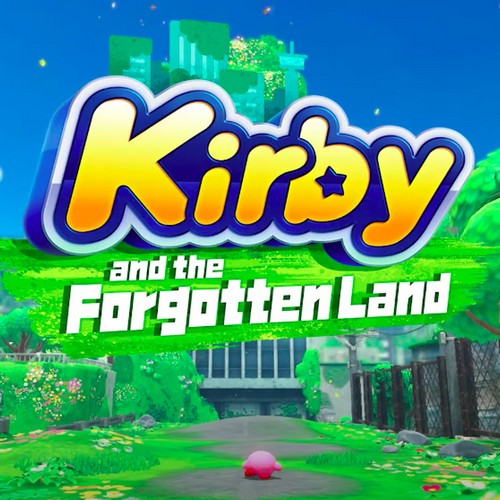 Explore Natural Plains either solo or with a friend, take on the mighty Gorimondo and get a taste of Kirby's new 3D adventure.