Monster Hunter Rise is the sixth main installment to the franchise made by Capcom. It delivers the Monster Hunter hits to be expected and is out now on the Nintendo Switch, with the PC version set for early 2022 release.

I will not be using the trend of World vs Rise; which is better? They are different games. World was designed to be more story-driven and introduce new players, and Rise is focused more on the roots of Monster Hunter but is the keeping new elements that worked.

Monster Hunter Rise uses a traditional Japanese theme with character, weapon, armour, and monster designs. The player character’s first outfit is very samurai/ninja inspired, and the main village hub also has a pleasant era-themed style to it featuring stalls and temples, but for those that want to make their character’s armour as bulky as possible, most of the craftable monster gear is still available and covers other eras and styles. The Rathalos gear still looks the best for a beefy-looking character in my opinion.

Monster Hunter games are not majorly known for the narrative, instead, they are more focused on monsters and hunting them, so any interactions with characters in the main village seem to be fast and short. Gameplay is easy to learn while also being hard to master for certain weapon types. New gameplay features are the wire bugs, which are used to traverse areas and help climb large structures. They can also be used in combination with weapons to deliver massive strikes. Along with the returning Palico companion, Palamute’s make their debut and are the best hunting companion you could ask for. Being able to ride the Palamute means you can track down the target faster and without needing to stop to recover stamina. 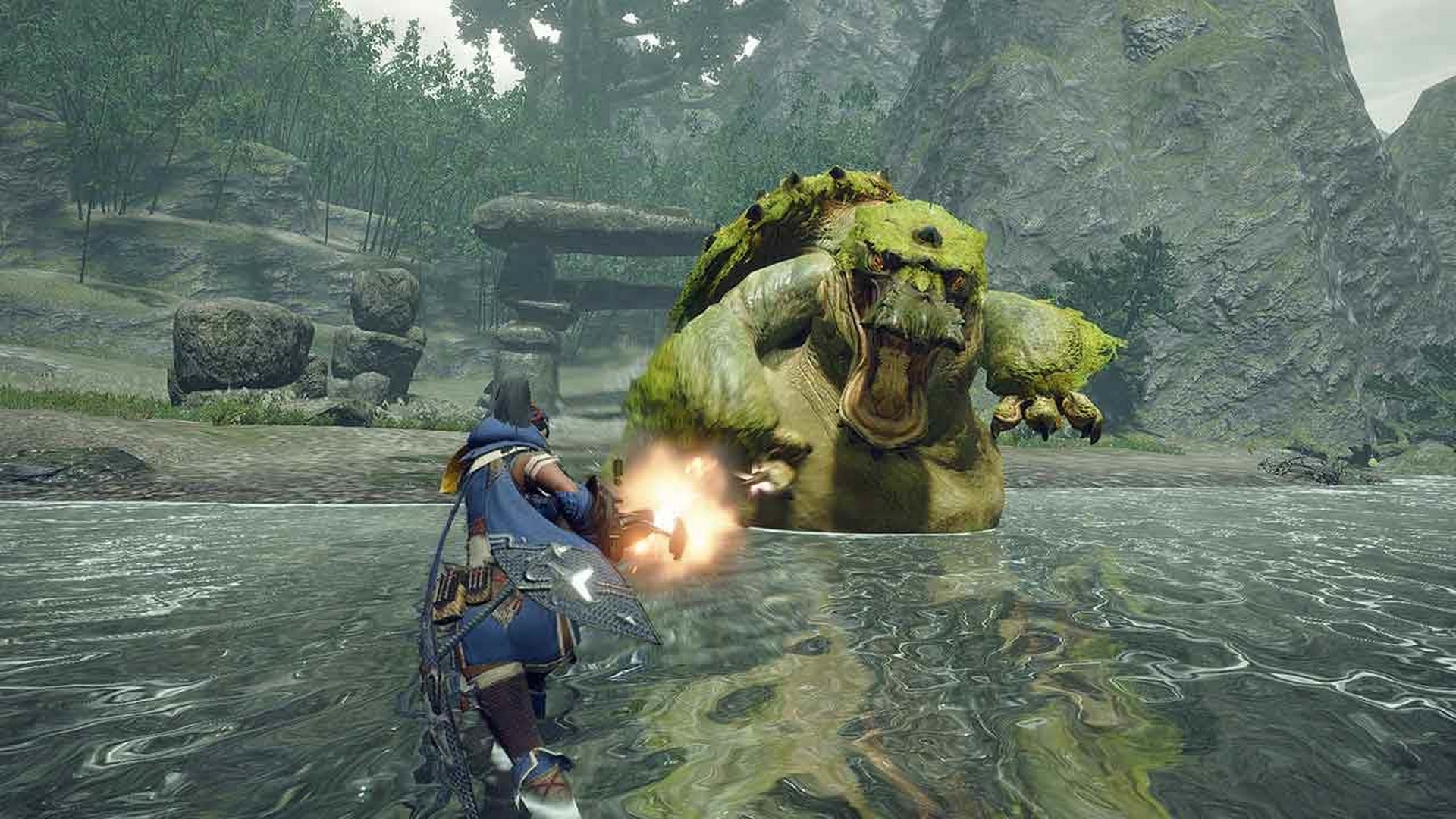 The mounting system has had a change. When a monster is weakened, you can mount it and control where it goes and what it does until it breaks free from the player’s control. From making it run headfirst into walls, to attacking other monsters, it is a great new system to learn and strategize. They’ve also added a new game mode called Rampage, where the player will have to defend a series of small walls and then the main gate from waves of monsters. You’ll move between fortifications around the level where bows, cannons, bait, and even hero summons can be used to help drive back the onslaught of the monster waves.

So with the old familiar company of the feline Palico, and the new edition of the canine Palamute, hunters are ready to take on the range of monsters that need to be hunted down. The minimap has had a change where it will now track each major monster on the level, so if you are struggling to get some good damage done I suggest waiting until the other apex creature is in the same zone and let them fight it out.

The chances of one of the monsters becoming dazed are high, and this will allow you to mount it so that you can keep attacking the other monster to get big hits dealt. There is a total of 11 new monsters added into Monster Hunter Rise, with a grand total of 61 monsters in all. There is plenty to hunt as you progress your hunter rank, and there will be harder hunts to reflect the player’s skill. 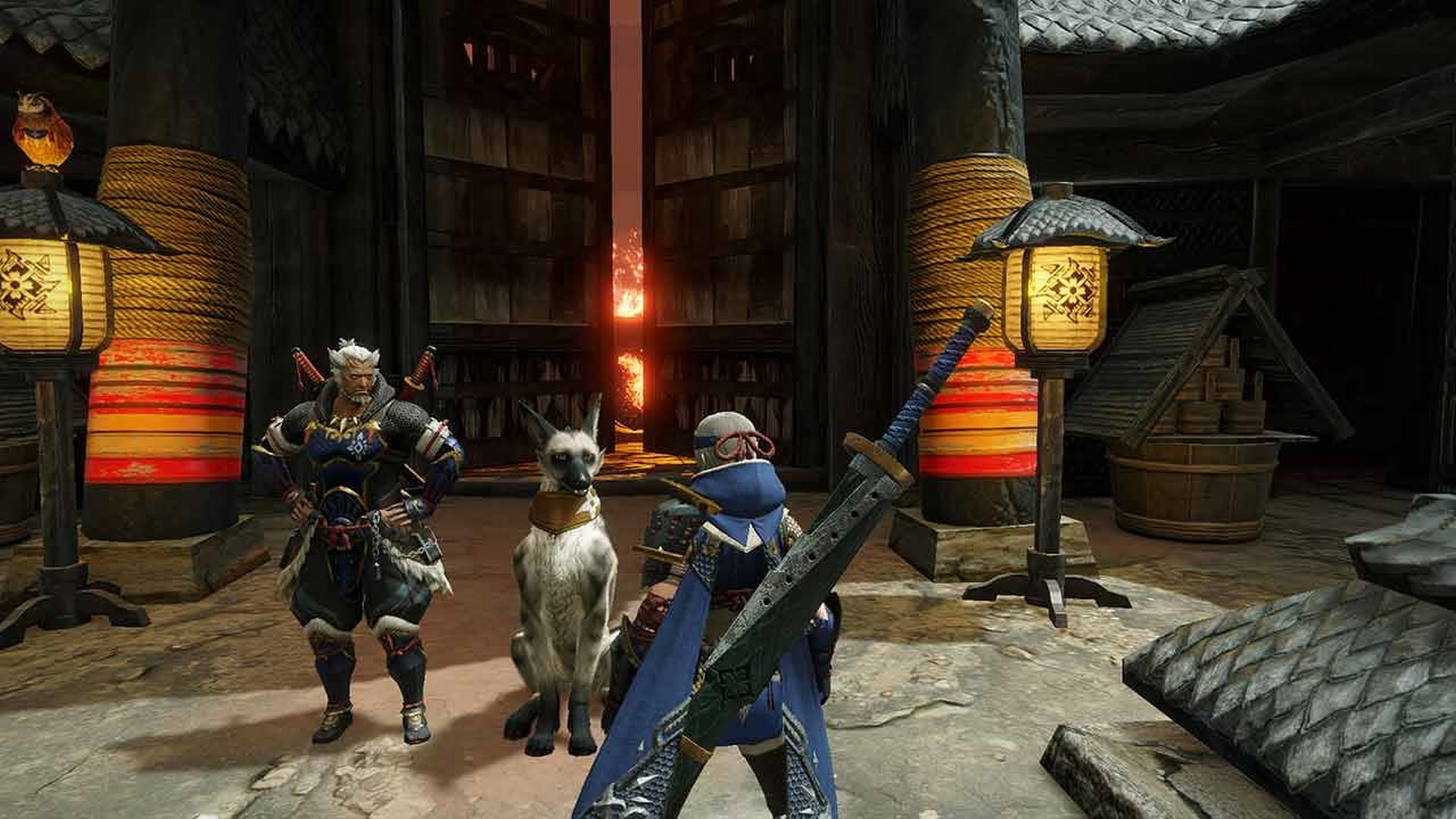 Controls for Monster Hunter Rise are quite easy to pick up and learn but there are advanced move sets that use the newly added wire bugs. If you are familiar with the switch button layout, then you will not accidentally press the wrong buttons like I did thinking it was mapped like an Xbox controller.

The audio and visuals of Monster Hunter Rise are fantastic. The music blends perfectly with the Japanese samurai/ninja era vibe that they have gone with, and when you first load up you are greeted with a pleasant harp instrumental with soft female vocals. In regards to sound effects, there was nothing that seemed out of place or out of sync. From the impact sound of a blunt weapon bouncing off a hard surface to the small meows or barks that the companions give off in and out of combat, nothing was overlooked audio-wise.

I am glad that Monster Hunter Rise has taken a few things from World to keep expanding on, but am very thankful that it has gone back to the old way of less story, more action. Being able to watch the cooking Palico team whenever I went to the canteen will never get old, but I wouldn’t mind if the photo mode was a little more user-friendly, as I never really got to snap any good shots of my companion. 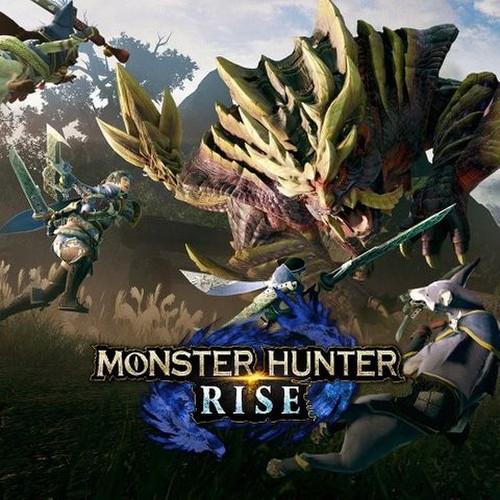 Set in the ninja-inspired land of Kamura Village, explore lush ecosystems and battle fearsome monsters to become the ultimate hunter. It’s been half a century since the last calamity struck, but a terrifying new monster has reared its head and threatens to plunge the land into chaos once again.