We all like to think we’d be able to escape a situation. You watch a couple of horror movies, see how that one person manages to survive, and think to yourself, “Oh, I would have done it this way and we would all have survived.” First of all, it’s a movie and you’re watching from an outside perspective, somewhat calmer than the people being hunted. Secondly, it’s a movie! They usually have subtle details throughout the scenes that have you screaming in frustration at their apparent stupidity. For the majority of us, the reality is that if we were in a stressful situation like this, we’d probably miss those details as well.

Unlike its predecessor, Monstrum 2 is completely multiplayer. Developed by Team Junkfish, up to 4 survivors can test their wits against a single, player-controlled, monster. Starting a game will require a minimum of 2 players, and one of these players has to be the monster. Fortunately for the survivors, the number of objectives is scaled according to how many are playing, starting with three for a single survivor, and seemingly scaling by an additional 2 per player.

Monsters on the other hand have the choice of 3 different monsters, all with their unique abilities. I don’t like the idea of a player being able to choose to be the monster, nor do I like the idea of them being able to choose their monster. I feel that the player controlling the monster should be selected at random, or perhaps the assigned monster is done so at random. 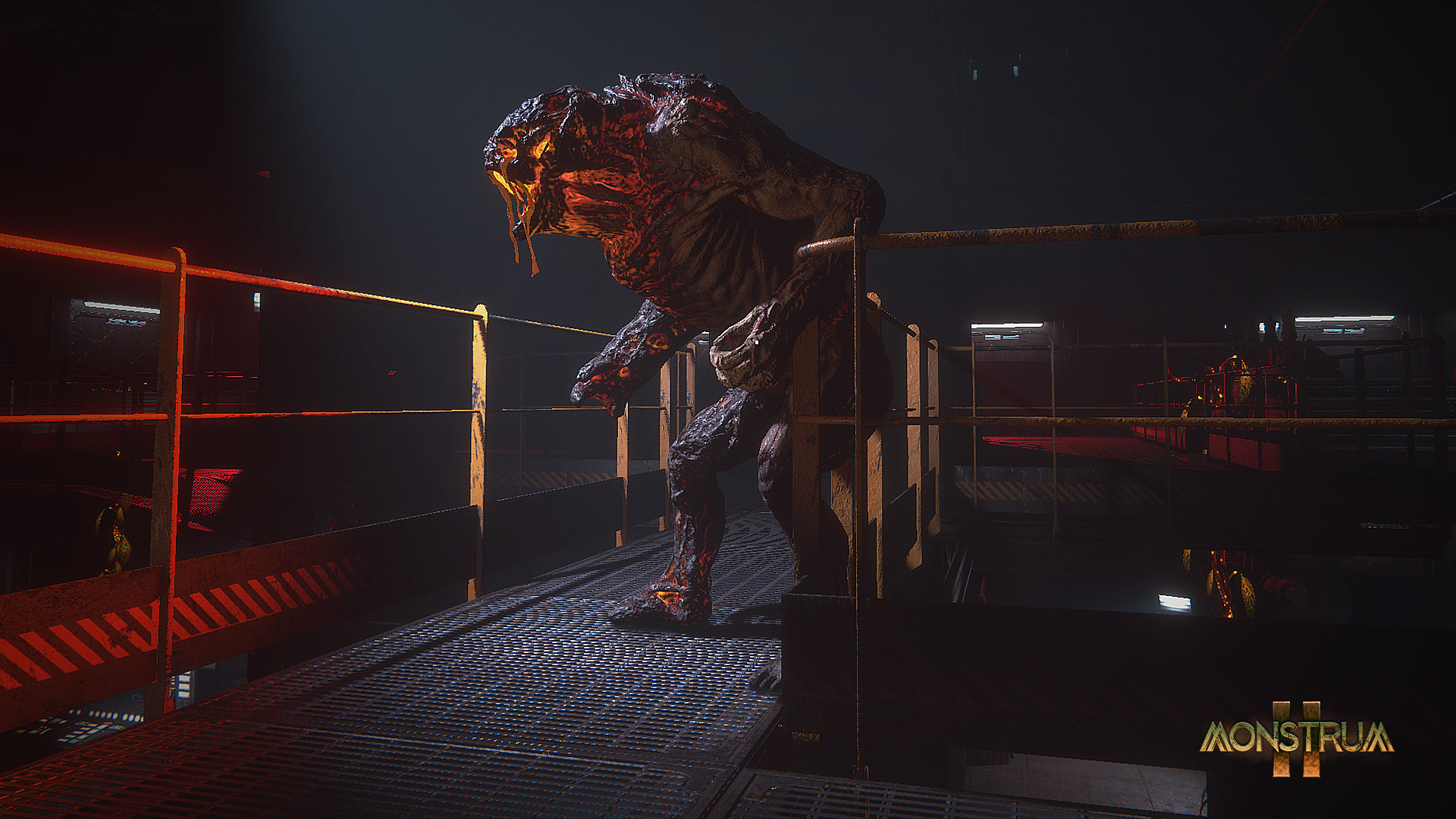 Once the game starts, players are expected to cover several procedurally generated objectives within 15 minutes, and each of these objectives has a mini objective associated with it. To open the path to escape, players need to re-connect the power from several switches before moving onto the next area. Some switches will be as simple as interacting with them, while others will require you to time events or use items dotted around the map, such as a welding torch to repair a hinge, or an identification card to open a particular door. Ideally, players will work together to find and overcome these objectives, as the game doesn’t offer much in the way of direction other than some cables that just look like their part of the scenery, or a hovering icon when you’re within six or so meters of a switch.

Even with these very basic hints, our little testing group found it quite difficult to find what we were after, with some objectives seeming to spawn inside the walls during a couple of our games. Should the players manage to complete these tasks, you’ll then need to make your way to the method of escape; a submarine or a helicopter, depending on which one the game decides to use at the start of your mission.

We only managed to do this once during our games, and this was simply because our monster at the time decided he was going to eat his dinner instead of hunt us. Preparing the submarine for escape was another set of objectives in itself, having to move it into location, open the doors, and then lower it into the water. While the levers required were once again highlighted, they all seemed to do the same thing, so it was only a matter of time before Jimmy finished his happy meal and came to find us. 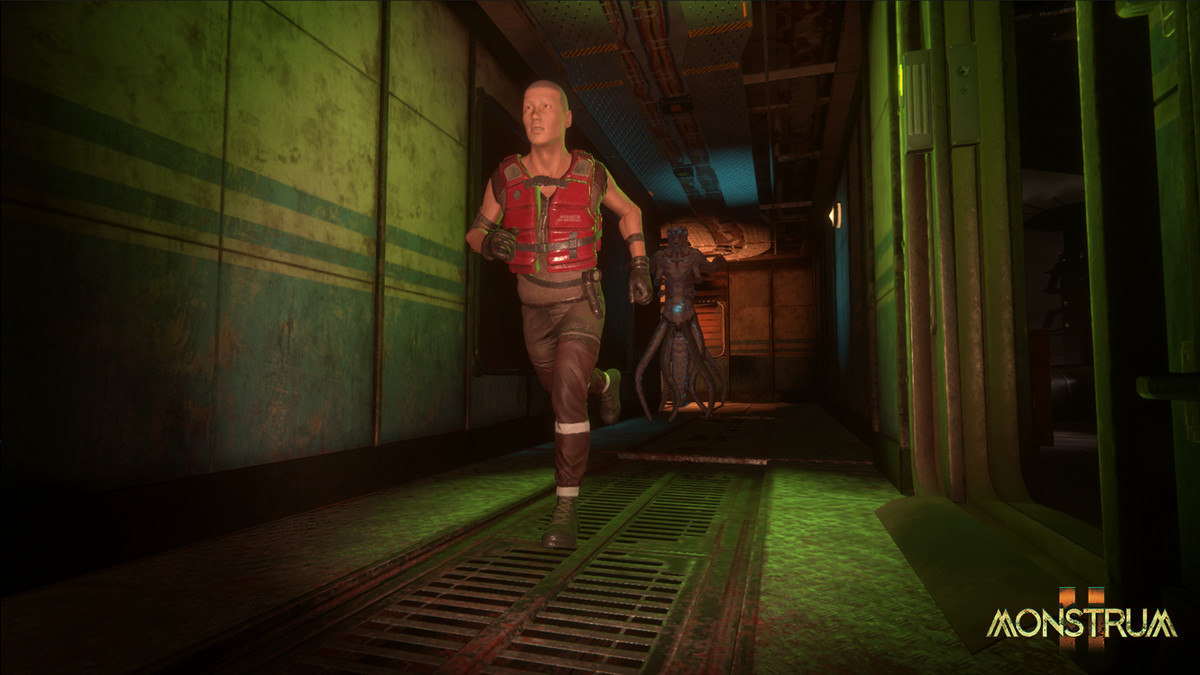 Returning from the first game is the Brute, a giant creature able to smash aside objects, charge headlong into enemies, and emit a horrifying roar that works similarly to echolocation, displaying the survivor’s last known location on the screen. The Bhagra is a new character; a small, dog-like creature that can hang from the ceiling, track survivors by their scent, or pounce great distances to pull them to the ground. One could expect that this would probably also be the fastest creature on foot, but its movement speed was easily comparable to that of the survivors.

The final monster we had access to is the Malcosm, a strange tentacled monster that can phase through certain objects, see through the survivor’s eyes or drop sentinels – strange egg sack looking things that can detect the survivors, cause them some damage, and allows the Malcosm to teleport to them.

Being an early access release, the controls are a little bit janky, particularly when it comes to movement. For a game that is all about moving quickly, the standard controls make this quite difficult. As with any FPS-style game, the shift key will have you sprint, but to perform a slide to avoid the monster’s grasp, you’ll need to hold this and the left ctrl key at the same time. With the Malcosm being the slowest of the currently available monsters, the ability to teleport should be your best friend, but doing so will freeze you in place for a few seconds before it happens, and then another slight delay immediately after changing locations before you can move again. It’s also interesting, and somewhat confusing, to find that the interaction key is F, as the usual E button is there to activate the torch the survivors all seem to have. As the play area isn’t that dark, the torch isn’t necessary, and picking up the giant glow sticks is pointless unless you’re planning a rave. 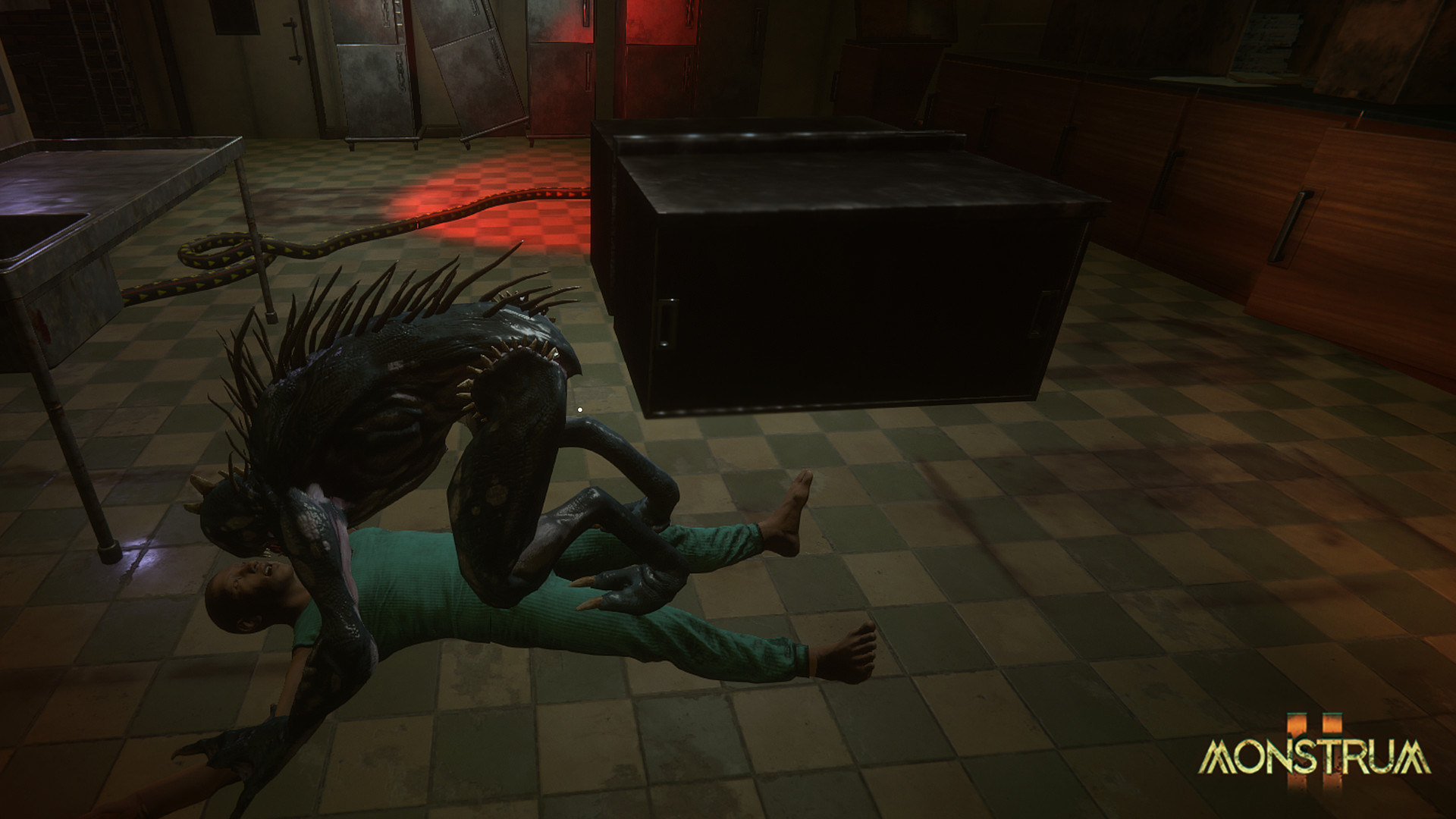 Now, I will admit that Monstrum 2 does have some nice graphics. The Sparrowlock, being the giant oilrig-come-research facility looks exactly how’d you’d expect an abandoned metal structure to appear. Jagged edges are covered with rust, while paint bubbles away revealing the corrosion caused by seawater. The floors appear to be slippery from constant sea mists, while boxes and other debris are littered about.

The character models, particularly for the monster, are very well detailed but have a few animation issues. I noticed while playing as the Bhagra that its attack didn’t seem to have an animation for me, though the survivor’s perspective was of me shoving a large tongue down their throat. The Malcosm’s teleport didn’t feature any special effects or animations – it just simply appeared. We also noticed that dead survivors didn’t seem to render properly either, with the head seeming to pull back into their torso with that wonderful stretchy flesh glitch.

Monstrum 2 has potential, there’s no doubt about it. Unfortunately, it is let down by janky controls and a lack of direction for survivors, but this isn’t a released title – we are still very much in the early stages of early access. As it stands right now, our little group had more fun running around and trolling the monster, still trying to complete the objectives, but focused more on seeing just how long we could survive. If they give the survivors a little more direction in what needs to be done, perhaps reduce the playable size of the map, or even reduce the number of tasks in total, players won’t feel so hopeless while playing. All we can do for now is wait and see what changes Team Junkfish might implement before Monstrum 2’s release. 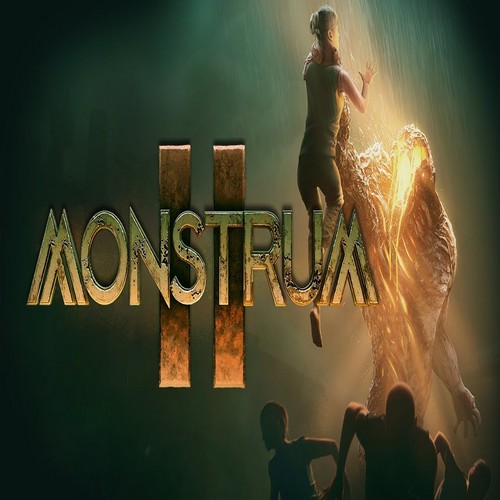 Monstrum 2 is an asymmetric multiplayer survival horror that pits a team of prisoners against a terrifying monster. It combines tense first-person stealth gameplay and fast-paced adrenaline-pumping chases within a procedurally generated environment that changes with each playthrough.