From the amazing humans and Mudokons over at ‘Oddworld Inhabitants’ comes this beautiful reminder that there really is no expiration date on a quality game. 23 years after the original “Oddworld: Abe’s Oddysee” introduced us to our favorite gangly, slightly funny shaped, blue hero Abe, Oddworld Inhabitants have teamed up with the creative geniuses at video game developers ‘Just Add Water’ to bring Abe to the Nintendo Switch through “Oddworld: New ‘n’ Tasty!”. So grab your favorite tasty snacks, preferably without the Mudokon meat, and get ready to find out why I think this game should definitely be in your Nintendo Store cart.

This gorgeous game was a complete ground-up rework from the original, so clearly they did more than just add water! That being said, the developers at Just Add Water did an amazing job at ensuring that the game’s roots never changed, they just gave us a slightly more polished version, one that really belongs in the current gaming world. “Oddworld: New ‘n’ Tasty!” has been around for a few years now, across multiple gaming platforms, but never before have you been able to throw Abe in your pocket with such high quality, and take him wherever you want. It’s almost like he’s in 3D. OK, so not quite, but it’s close, as this beauty was actually remade in 2.5D!

2.5D animation is an animation technique developed in the early 2000s that allows the animators to use a range of techniques to make an image appear as if it has 3D elements, despite it still being technically a 2D image. “Oddworld: New ‘n’ Tasty!”, uses these techniques multiple times, most noticeably through doorways that lead “into” the background, really helping immerse the gamer in the experience, whilst allowing the game to stand by its roots as a classic side-scrolling game. This entire style was founded to allow video game developers to create more complex environments, and I feel like this was put to fantastic use in “Oddworld: New ‘n’ Tasty!”, as this simple yet effective animation buff made me feel like I was still playing the original, without getting that feeling of playing an old 90’s game. Truly a fantastic way to bring a 20-year-old game into the future without blowing it out into an entirely new game. 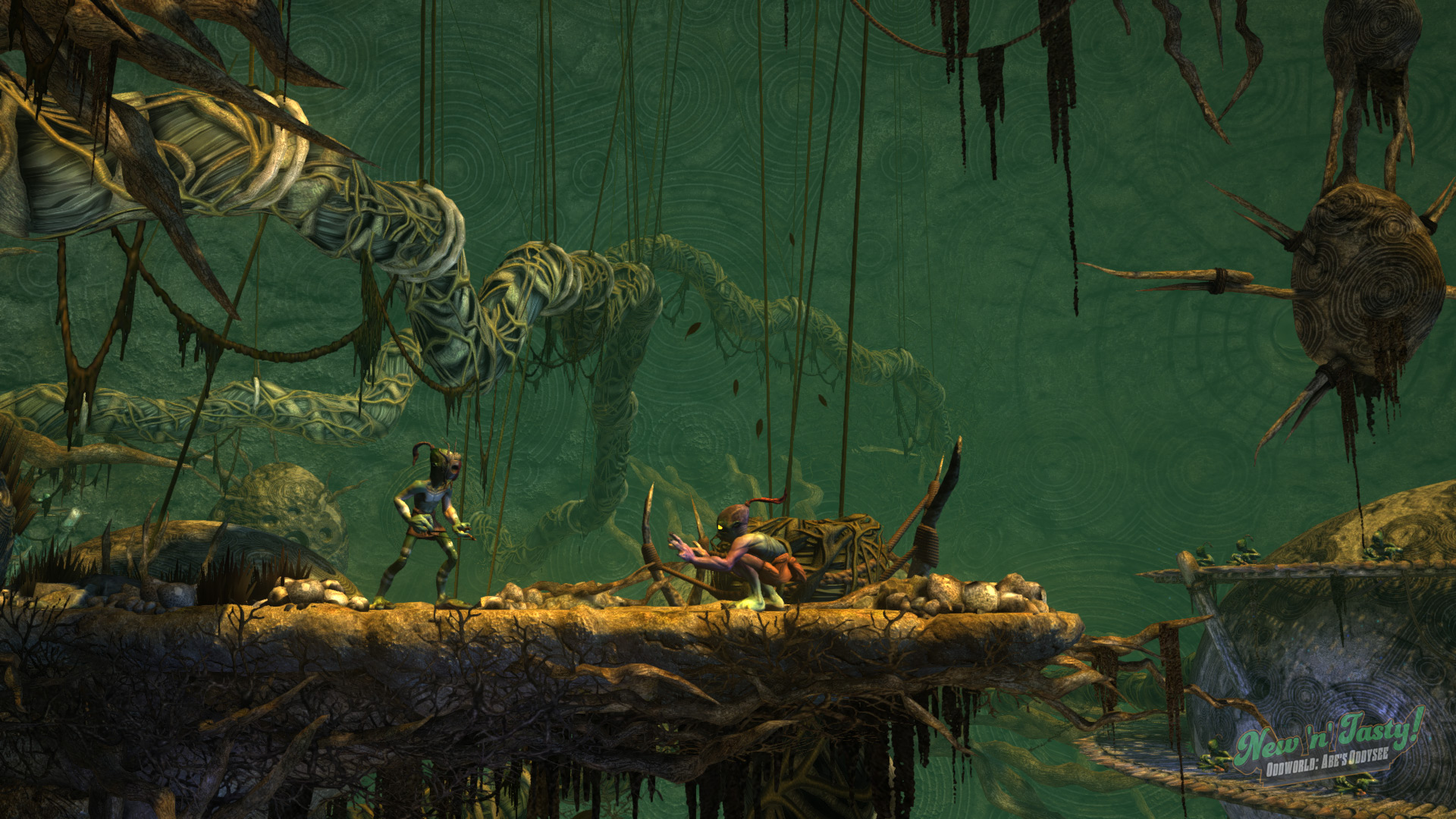 Enough of the who and how, it’s time to learn about the WHAT! From the moment I loaded the game and saw Abe and his gangly blue hide walking across my screen, I was jittering with pure excitement. It was time to relive this absolute classic and be reminded as to exactly why Abe was on the run from his boss.

We start this story with Abe, one of a multitude of hard-working Mudoken, overhearing his evil, overlord style boss telling his underling about the secret ingredient in their new tasty snacks- and we are absolutely “shooketh” to hear that it’s the Mudoken themselves! Ever feel like your boss chews you up and spits you out? Abe is doing his best to make sure that doesn’t happen to him on a more literal level. Alas, Abe sneaks off to begin his own escape, while simultaneously being the salvation of his people.

Unfortunately for Abe, he is spotted running away and immediately becomes number 1 on the wanted posters displayed all over Rupture Farms and further throughout the Zulag levels. Suddenly, Abe’s dash for freedom becomes fraught with potential dangers, from gaps in the metal flooring just waiting for him to make a misstep, electric fences able to zap you into oblivion, the giant “scarabs” that want to knock you down and stomp all over you, right down to the weaponized Sligs, that I swear are a robot-mutant hybrid of the squirrel from Ice Age. This could be tougher than I thought.

Not to frighten you anymore, but the loading screens also give you lovely tips, such as “Searing flesh is not the same as tasty snacks”. This seems like solid advice, and I dare say a good part of why Abe is now on the run. Although I’m sure Hannibal Lecter is pressing “X” to doubt.

Alas, most of the time you’re actually killed in “Oddworld: New ‘n’ Tasty!” will be from a slow response time to input. I definitely remember this driving me crazy in the original, and it seems almost impossible to stop exactly where you want when you’re moving at speed. This means being chased when you need to be on a ledge is much harder than it appears. Sadly, this is one game that will not let you feel like you’ve got full control of your character, more like puppet strings that you’re kind of hoping you get right. 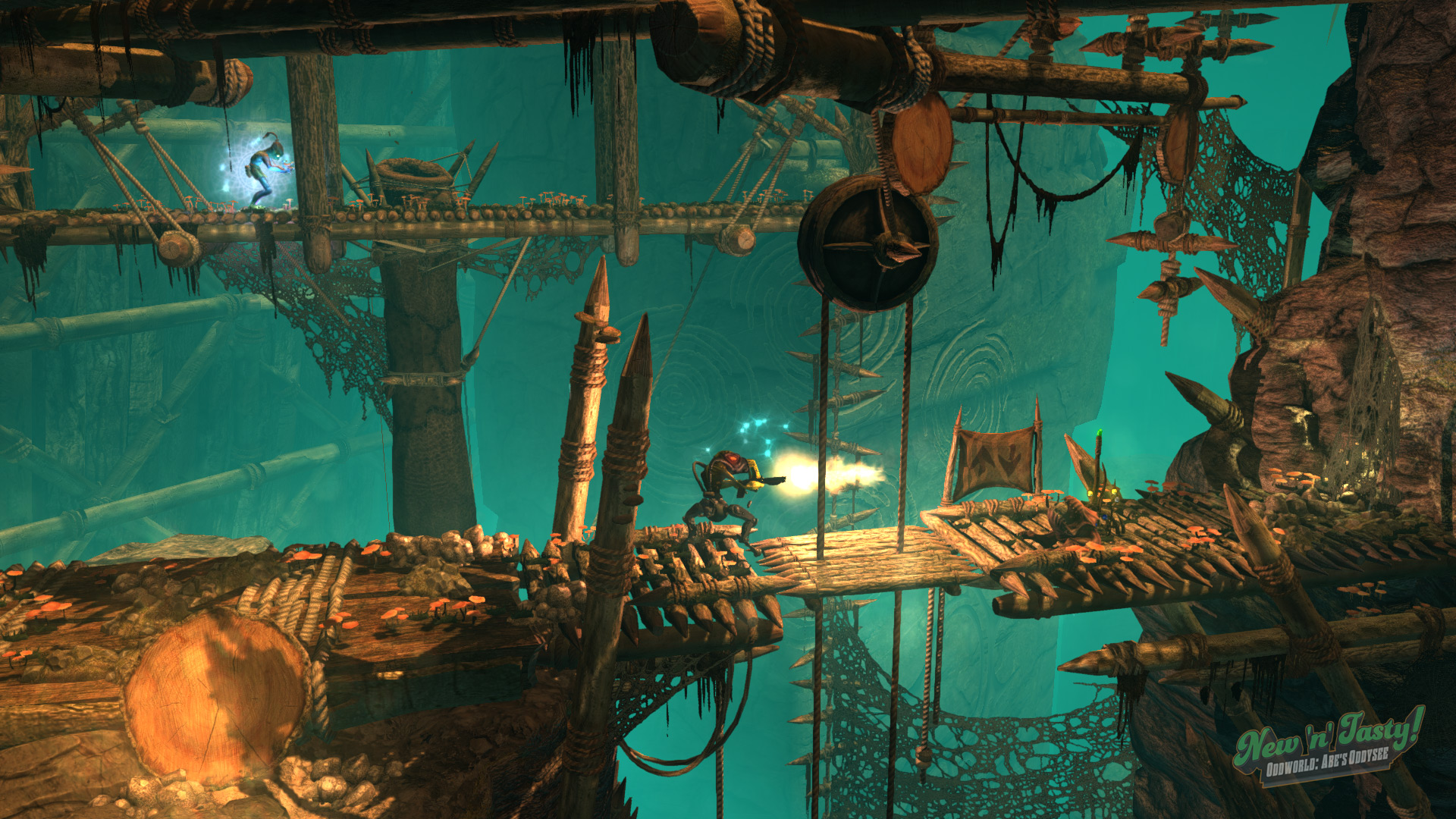 Luckily, we aren’t just left high and dry. Sliding banners across the top of the screen give you almost the perfect amount of information for a tutorial, and better still there always seems to be a checkpoint near new activities. These checkpoints also help you test out all the ways that Abe’s relatively unarmed self can distract, sneak by, or in my favorite case, destroy, all the enemies that so badly want him for dinner. The most boring is the ol’ sneak through smoke, and the bottle cap toss for distraction, but credit where it’s due this makes for good practice when throwing other more explosive items. Now here comes the fun part; you use their own traps against them! You can drop the bad guys through trap doors, zap them in their electric fences, or obliterate them through the very mincing machines I’m sure they were planning to use on you, there’s always a way by. This is so much fun!

Whilst you’re sneaking through this heavily guarded facility, don’t forget that your mission, apart from escaping, is to free your fellow Mudokon! They’re lucky they’re cute, in a weird, pug-like, sort of way, cause their vocabulary is severely limited. About all they can do is say hi, and either follow or wait. Again, about as intelligent as my pug! However, if there’s a bunch together, it’s kind of fun to just spam the chat buttons. I swear I created a haunting cacophony of annoyance that currently rings in my ears when I close my eyes. It’s also fun to just walk with them, as they spread out behind you to walk almost single file. The side-scrolling nature of the game means we spend half the time looking like the Beatles on Abbey Road.

Alas, much like The Beatles, not all of them have made it this far. I’ve accidentally, and also occasionally intentionally, made those poor mindless followers of mine walk through active electric traps, and right into the path of bullets. OK, so I’m a little sadistic, but I swear it was more for curiosity than my own amusement. At least, it was most of the time.

On top of this puzzle ridden challenge, and the nostalgic outpouring of a childhood classic reimagined, “Oddworld: New ‘n’ Tasty!” now also offers an easy mode and a hard mode, varying the degree of enemy speed and Abe’s abilities. It’s great for all ages, whether reliving the challenge or introducing your kids to a game modernized enough to still grab their attention.

I can’t think of a better way to put this than to say thank you. Thank you to all involved in bringing this game back to life, and for bringing it into the modern era, where it can now truly reach the span of players that I think this game deserves. “Oddworld: New ‘n’ Tasty!” is an absolutely great game. Get in on it before they all become tasty snacks! 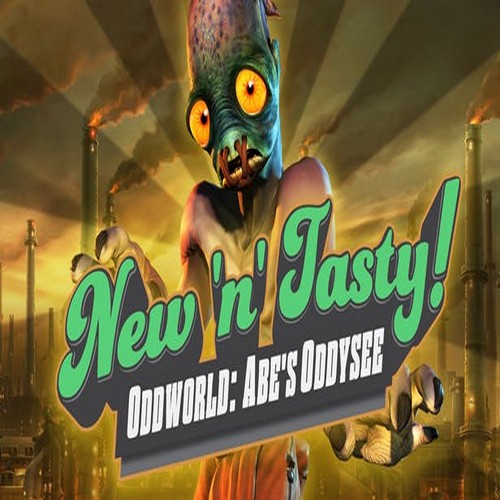